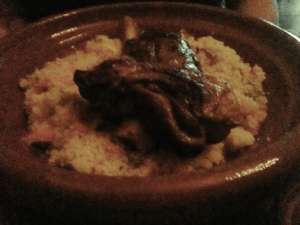 Novita Bistro is a nice change of pace from the overwhelming number of Italian BYOBs throughout Center City and Southwest Center City, Philadelphia. With its emphasis on Mediterranean and Moroccan food, you can enjoy delicious housemade sausages and tagines in their cozy, comfortable dining room. The service is friendly and the chef is quite happy to talk about his food if you catch him by the counter in the open kitchen.

END_OF_DOCUMENT_TOKEN_TO_BE_REPLACED

Novita Bistro opened in Philadelphia, Pennsylvania in 2008, on the 1600 block of South Street in the Graduate Hospital area of Center City. At first, Novita Bistro appeared as though it would be just another Italian-themed BYOB in an already saturated market in Philadelphia. With time and a little fine-tuning of the menu, owners Hatim Saaboul and Hassan Zanzoul (also head chef) focused the restaurant on Moroccan-inspired cuisine, the food of Zanzoul’s homeland.