Enjoy this satisfying Italian-style stew with uses sweet sausage and the unique pasta known as fregula. 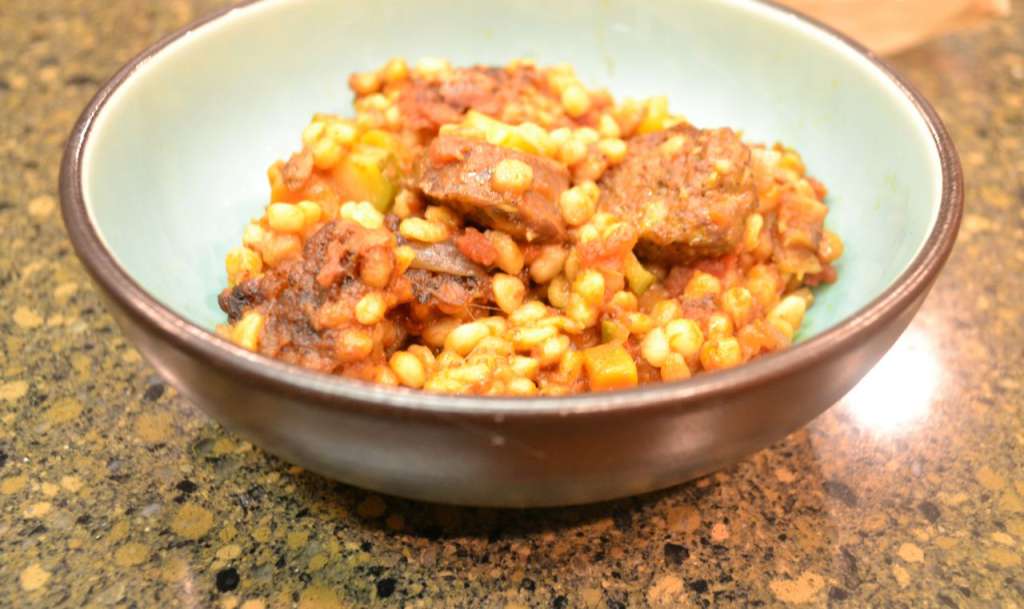 Have you ever cooked with fregula before? Or perhaps you’ve never even heard of it?

Fregula (also known as fregola) is a type of small pasta which originated on the island of Sardinia in the Mediterranean Sea. Made from semolina flour, fregula is rolled into small 2-3 mm balls of dough and then toasted in the oven, before cooking as you normally would prepare pasta. The toasting gives fregula a nutty, rich flavor that is very different from your typical small pasta and more like couscous.

Traditionally in Sardinia fregula is simmered in tomato sauce and served with local seafood such as clams or shrimp. But you can use fregula in many other ways: mixed with fresh vegetables and cheese for a salad, as a side dish for grilled seafood, or as a basis for a hearty thick stew. Here I’ve prepared a satisfying meal combining fregula with tomato sauce, Italian sweet sausages, red wine and vegetables. It’s easy to make and a great meal for a cold winter’s night, and a dish that can feed a crowd easily without costing much at all.

Prepare all vegetables for cooking so they are ready to go.

In a dutch oven or enameled cast iron pot, heat a small amount of olive oil over medium-high heat. Add the sausage and cook until browned and almost cooked through, about 20 minutes. Remove sausage from pot and set aside on a plate. 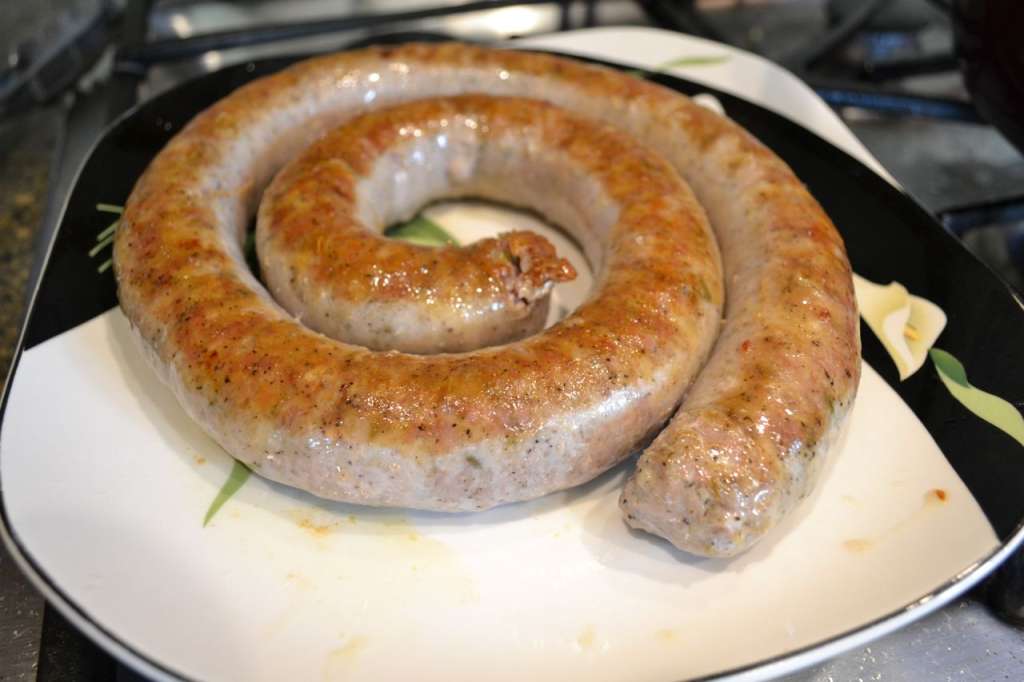 Lower the heat to medium and add the diced onion, carrots, celery and smashed garlic to the pot. Saute in the olive oil and sausage juices until the vegetables are becoming tender, about 6-8 minutes. 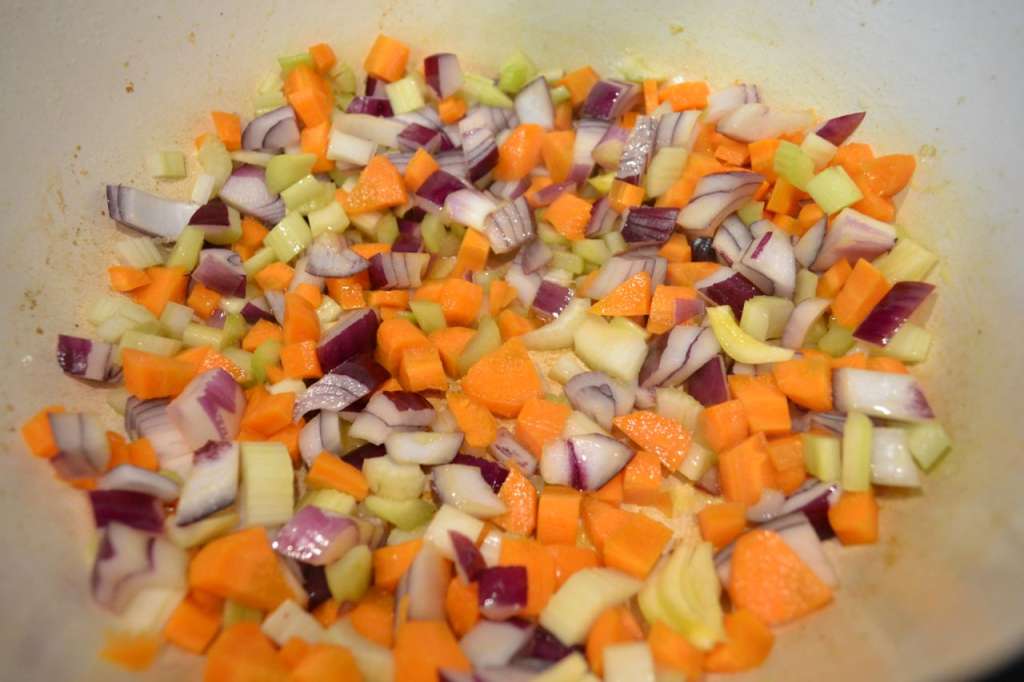 Meanwhile, slice the sausage into thick discs once cool enough to handle.

Raise the heat again and add the red wine to the pan, to deglaze and infuse the vegetables with flavor. Cook until the wine has partially evaporated, about 4 minutes. 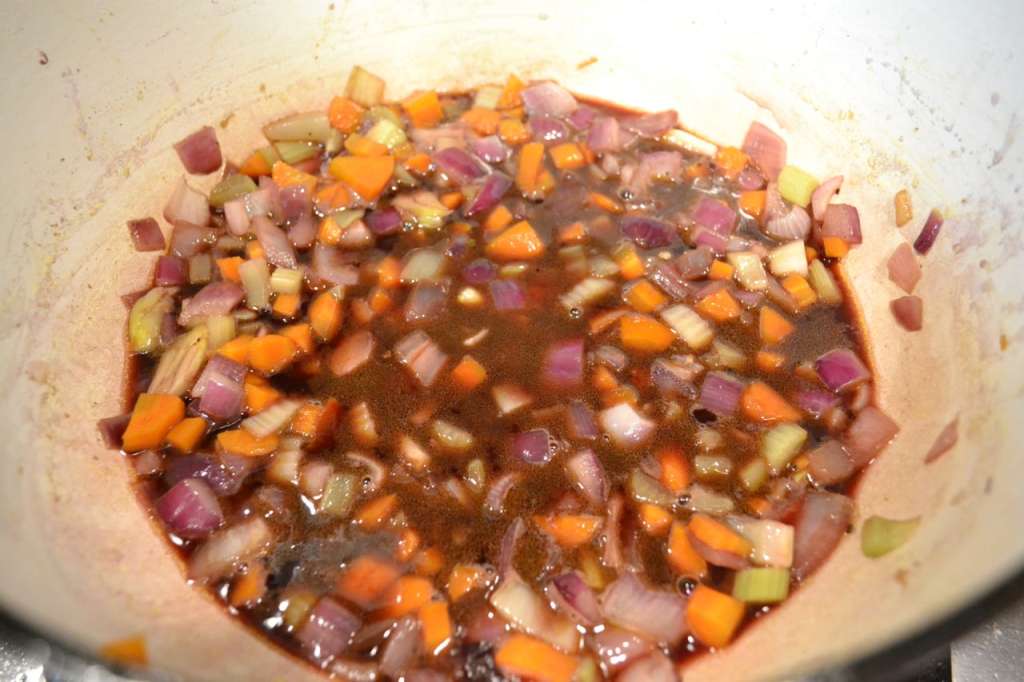 Return the now-sliced sausage to the pot. Stir to combine. 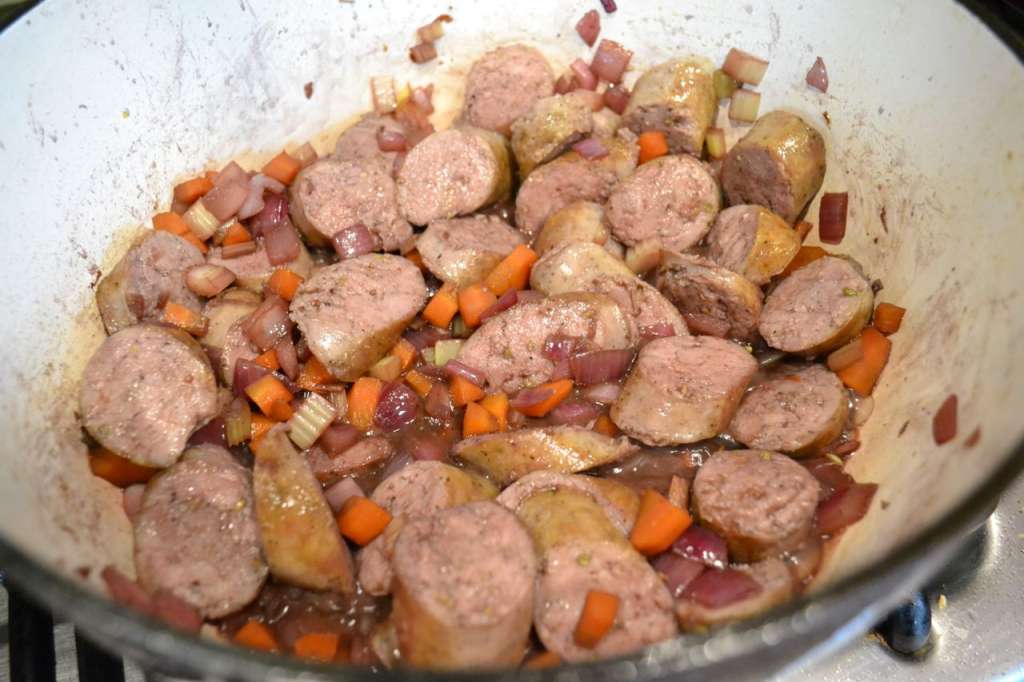 Add the canned tomatoes and bay leaves to the pot. Bring to a boil and then lower the heat, allowing the tomatoes, sausage, vegetables and wine to simmer gently until a rich flavor starts to evolve (30-40 minutes). Test seasoning occasionally for salt and pepper – it may depend on how salty and how many spices are in your sausage meat. 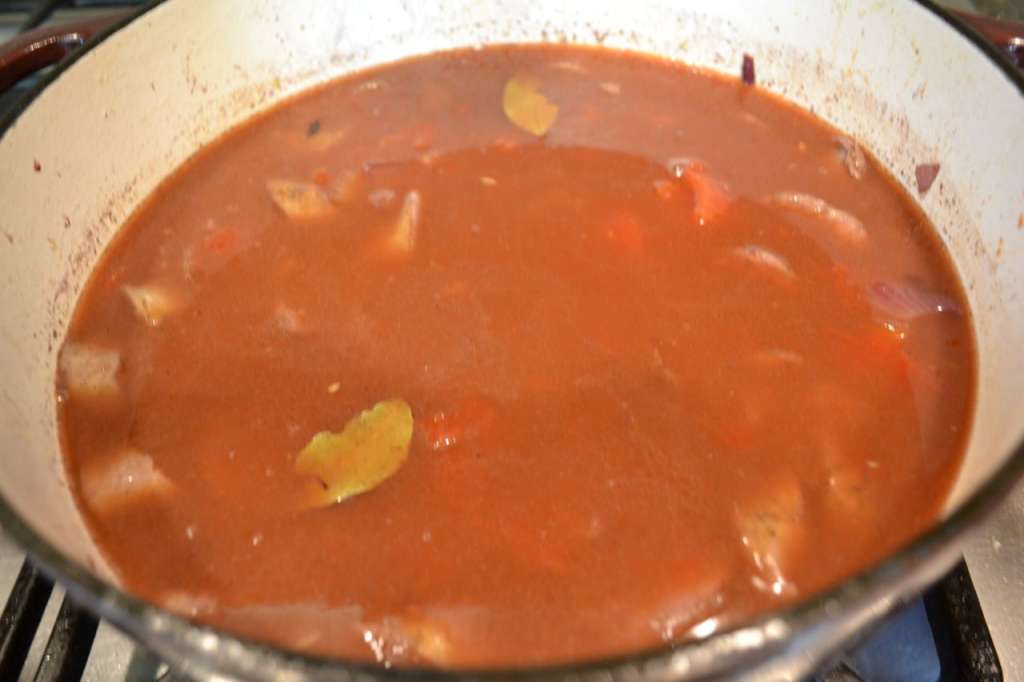 Add the zucchini and fregula to the pot. Again, bring to a boil but then lower the heat and allow to cook until the fregula is tender, about 15-18 minutes. 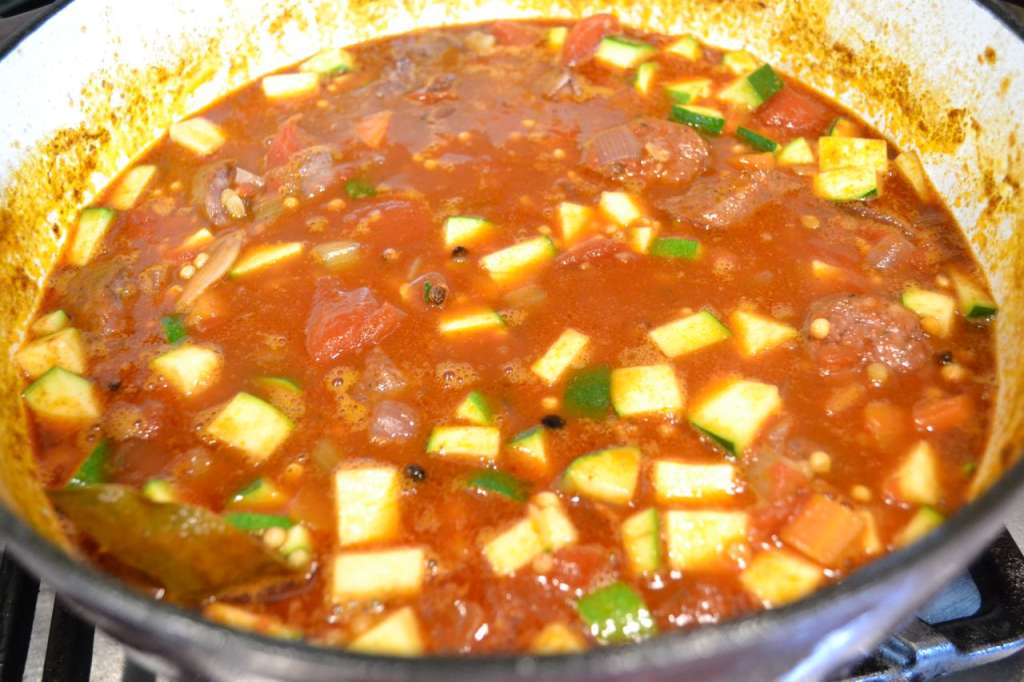 Remove the bay leaves and once more test the seasoning. Serve in shallow bowls topped with a little grated cheese if you desire, or with some crusty/toasted bread on the side. 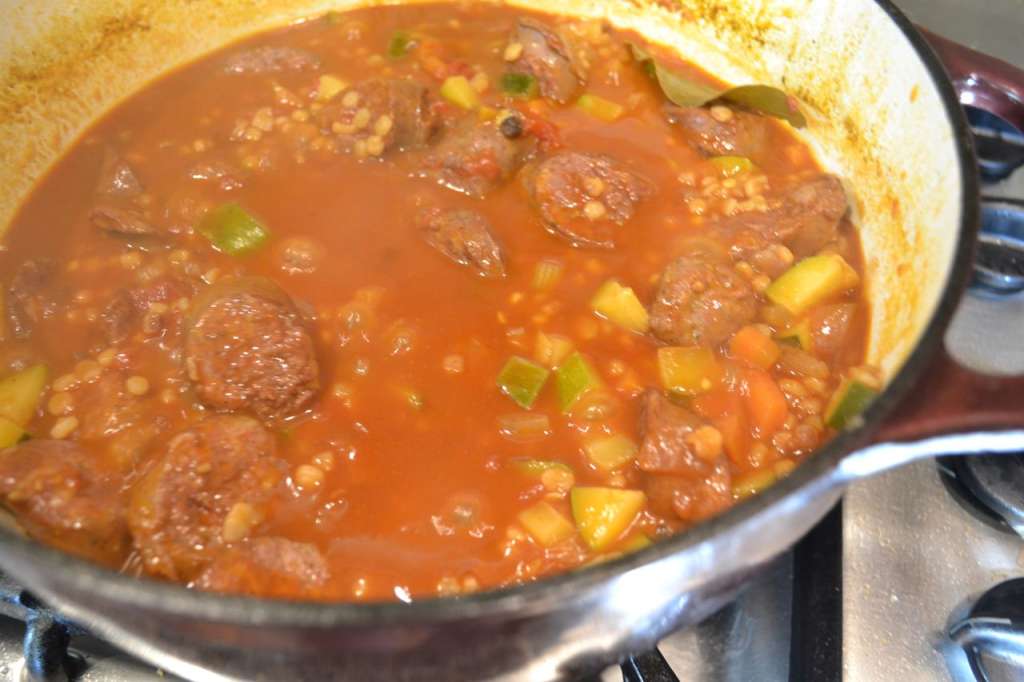 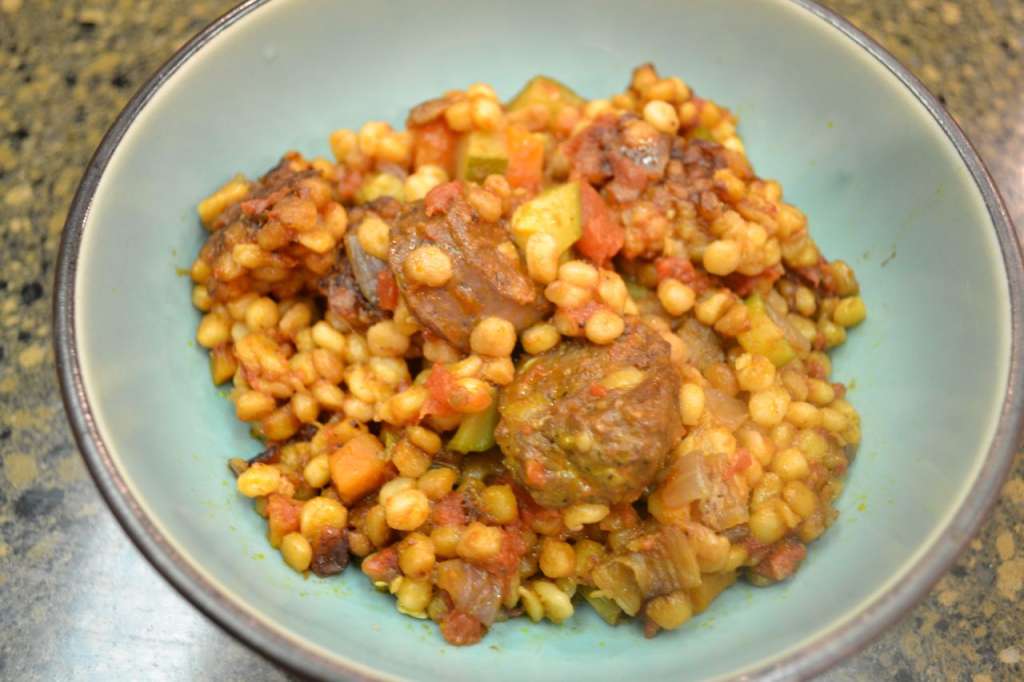 This entry was posted in Cooking and tagged fregula, one pot meal, sausage, stew recipes. Bookmark the permalink.