It’s been a while since I’ve checked in with Mandarin Oriental, the Japanese/Chinese restaurant in the Shop Rite shopping plaza in Mullica Hill. I know previously I’d found their food decent, if not exceptional, perhaps lacking a little bit in finesse as far as their sushi was concerned (although I always found the hot entrees and appetizers very tasty). So the sweetie and I decided to return the other week to give them another go. I was getting ready to head out on a long road trip and prepping dinner on top of all my other pre-trip chores just wasn’t in the cards. I’m glad we did as we enjoyed a very good meal.

We arrived about 6:30 on a Wednesday night to find the front of the restaurant completely packed, mostly with customers picking up take-out orders. Once they were all taken care of we were able to get a table right away, and only found a few other groups eating in. The restaurant itself does not appear to have changed at all since I was last here; the decor is still dark and subdued, but everything looks well-maintained and clean.

Deciding on how much and what to order can always be a challenge when everything looks good (and you’re hungry!), but we decided upon two appetizers, two big rolls, and one smaller roll. That ended up being just about the right amount of food for us; one more roll or a hot dish and we would have had way too much. 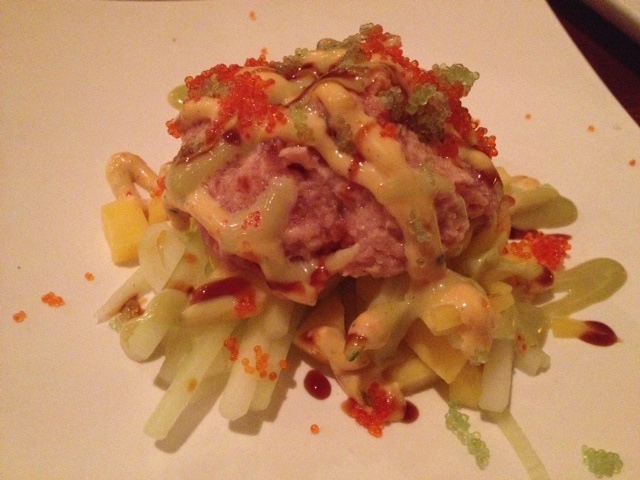 For our appetizers we started with a salad special of spicy tuna, cucumber and mango. This was nice and refreshing, topped with a little tobiko, eel sauce and spicy sauce. I actually liked this a lot with the crispy wontons served at the table. 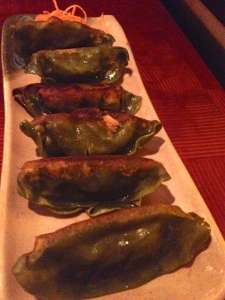 Even better were the vegetable dumplings. We ordered them pan-fried, and they came out with a perfect texture: crispy and browned on one side, soft and tender on the other. The spinach-flavored dough was a nice touch and the filling was terrific: crunchy and light, just overflowing with fresh veggies.

This plate was a real winner and something I’d come back to order again for sure. I just love a good dumpling and these were some of the best I’ve had in some time! 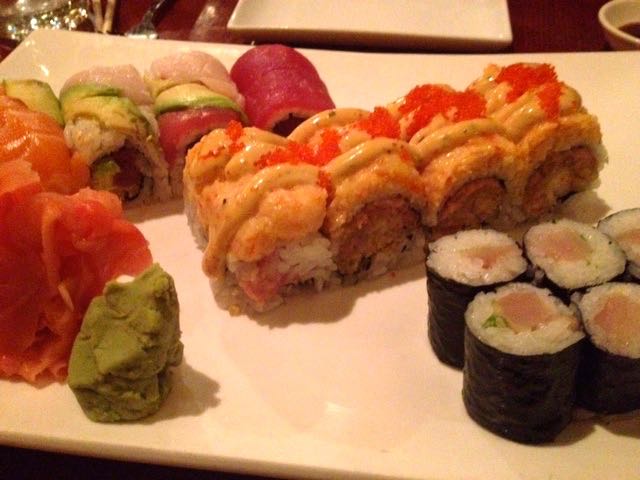 Our maki rolls came out soon after we finished our dumplings. As I recall, we ordered one new roll which I think was called “Pete’s Special”(?) which was like a fancy rainbow roll topped with salmon, tuna, and avocado. The roll in the center of the plate was a Spicy Lobster Roll, and the last a classic Yellowtail and Scallion roll. All three were quite good; dare I say I actually liked the simplest, the Yellowtail and Scallion roll, the best? But it was a nice balance of only one heavily-sauced roll with the other two being much more clean and simple. We actually couldn’t quite finish the plate so we took a few pieces home (for breakfast the next morning…yes, I know I’m weird.)

We finished off the meal with a generous bowl of green tea ice cream and an order of hot green tea as well. Overall we were both very happy and satisfied with the meal. I do think Mandarin Oriental has gotten better with time and I’ll have to start stopping in more often to try more of their specials and traditional rolls. It’s nice to have a place so near home where I can get a quick sushi fix.