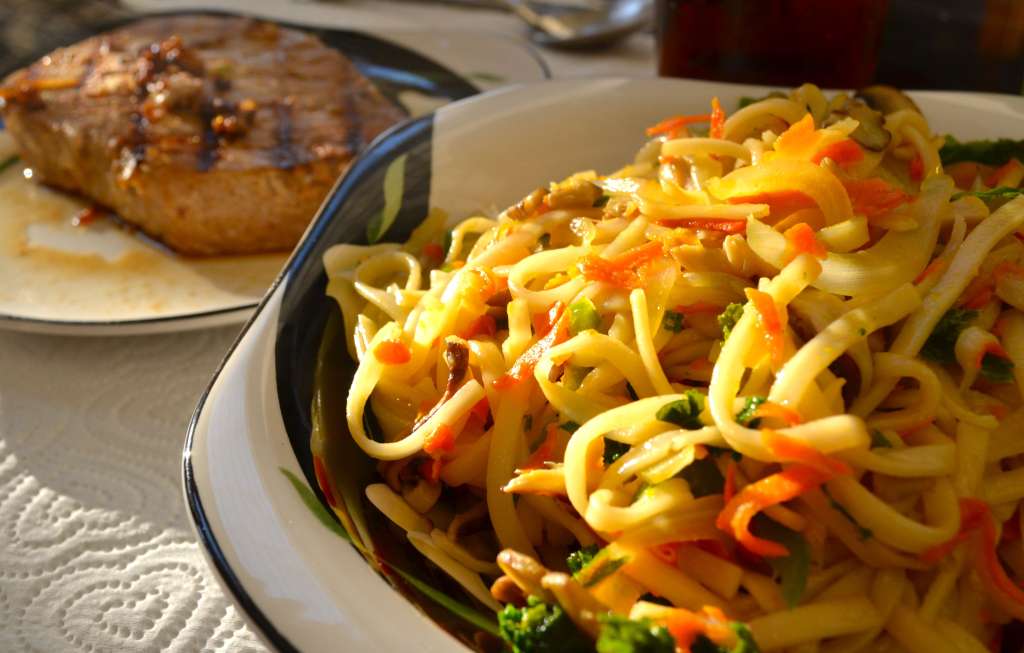 I love beautiful, fresh tuna, especially prepared in a Japanese style either just barely-seared on the grill or completely raw as sushi. But it’s hard to get true sushi-grade tuna, so most of the time when I am able to get tuna steaks I do them in a brief marinade and then grilled or broiled until just medium-rare. It’s a great compromise that still showcases the taste and texture of this wonderful fish while giving it a little extra flavor.

One of my favorite easy tuna preparations comes from Chef Gordon Ramsay, a recipe featured on his show “The F Word” for Sesame-Crusted Tuna. After a soy sauce marinade, the tuna steaks are coated in wasabi paste and sesame seeds, then grilled briefly to sear them off. It’s an excellent recipe, but I wanted to try something a little different the other night, inspired by that but with a few more flavors involved. I ended up grilling the tuna after preparing a wasabi-flavored marinade, and serving it with a stir-fried udon noodle side dish. The combination was fabulous and it was a simple dish to prepare as well, yet looked very stylish and elegant.

Want to give it a try? Then see my recipe details below. Note that if you wanted to go vegetarian, you could easily use my marinade for tofu “steaks” instead and I’m sure it would be delicious!

This recipe makes a perfect dinner for two – and is a great romantic meal when you want to impress your sweetie (or cook something lovely together). It’s easy to double or triple the recipe, however, to feed a larger family or gathering.

Marinate the tuna at least 30 minutes before grilling 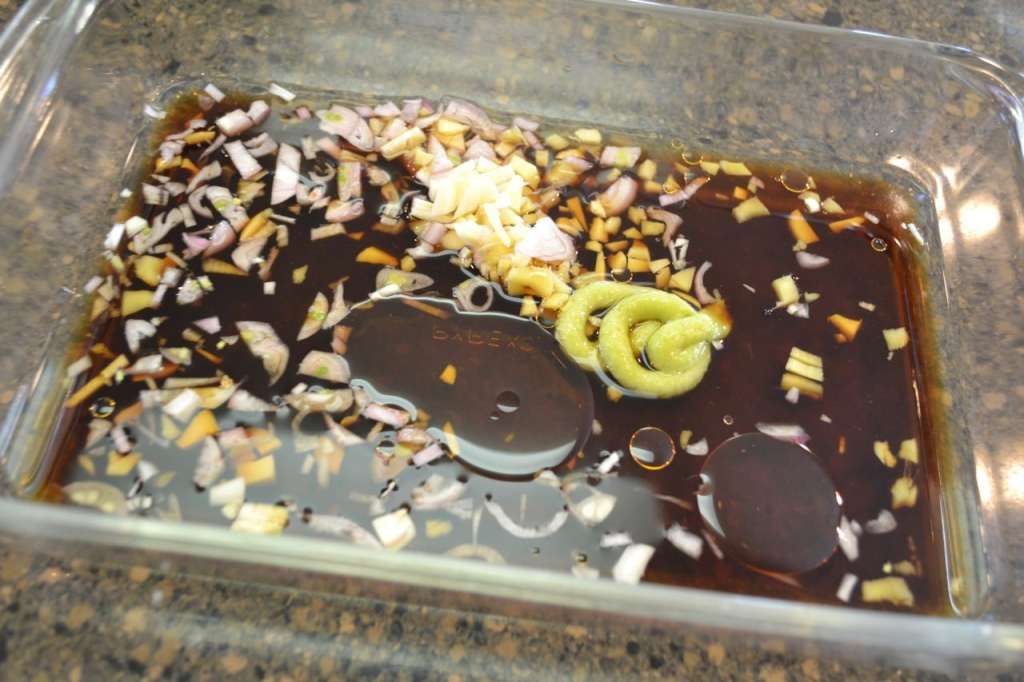 For two tuna steaks, prepare a marinade of the following ingredients:

Combine in a glass dish, add steaks, and marinade in the fridge for at least 30 minutes, flipping steaks half-way through.

You’ll want to prepare this recipe with the best quality “ahi” (that is yellowfin) tuna you can obtain, fresh or frozen. The tuna should have a bright pink color and no strong odor, and ideally be “sushi grade” although that can be hard to come by unless you have a specialty or Asian fish market near where you live. 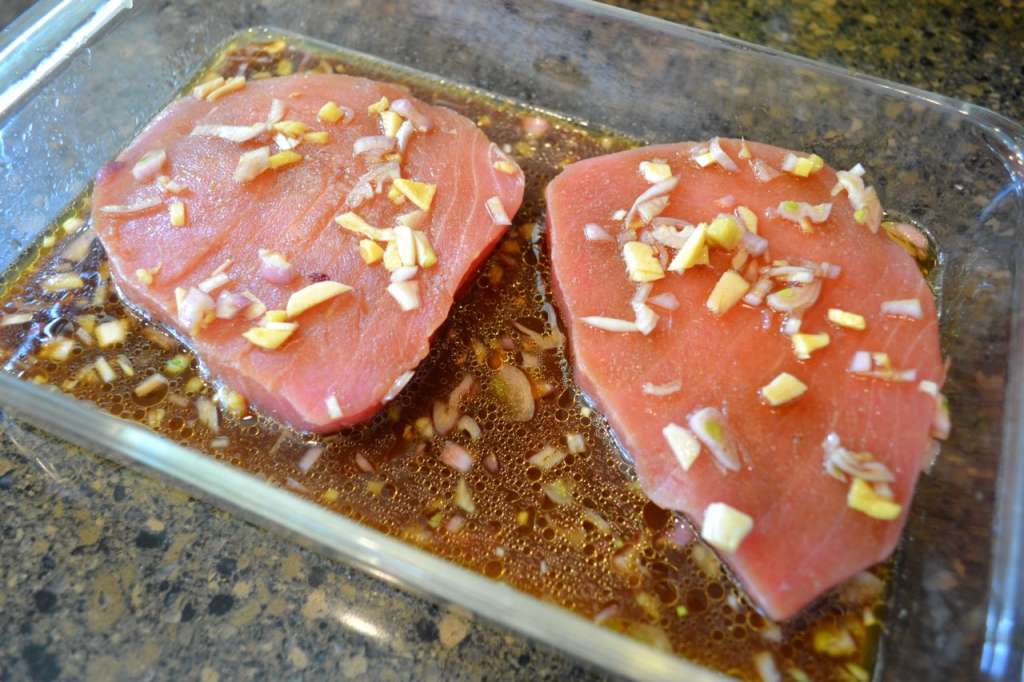 My tuna steaks just in the marinade – now it’s time to prepare the noodles!

Udon noodles are typically used in Japanese noodle soups and dishes such as Tempura Udon: a preparation featuring a rich broth, meat and vegetables. But udon noodles can also make a satisfying stir-fry for a change of pace, when you want something heartier than vermicelli or rice sticks.  Once you have the tuna steaks marinating it’s a good time to prepare your mise en place to be ready for the last minute quick stir fry.

First get a pot of unsalted water on the stove to bring to a boil. Then assemble the following ingredients: 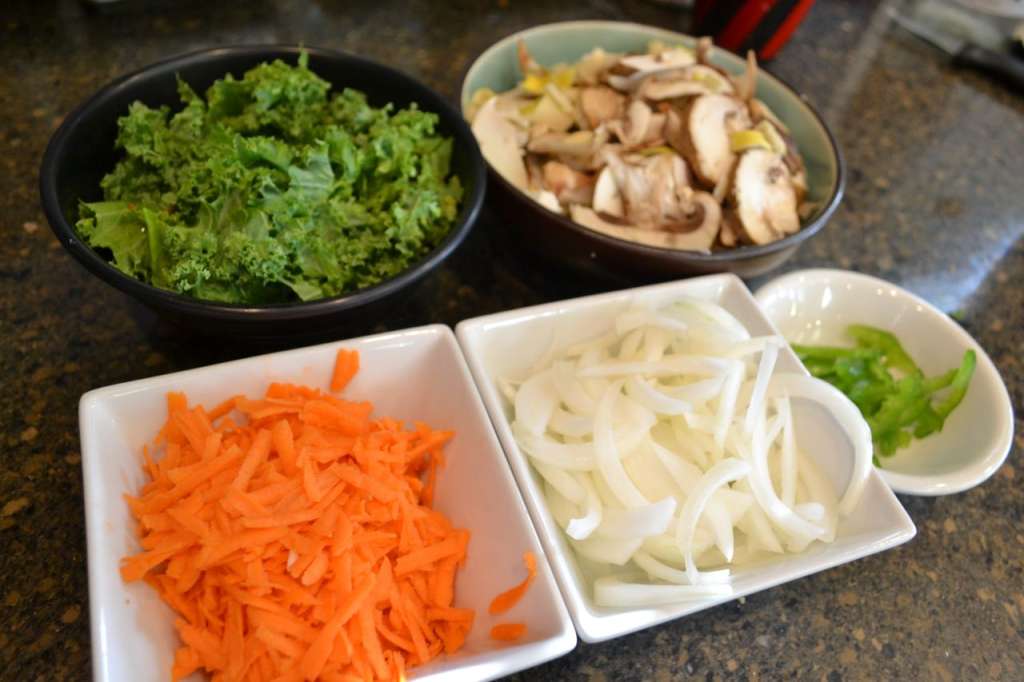 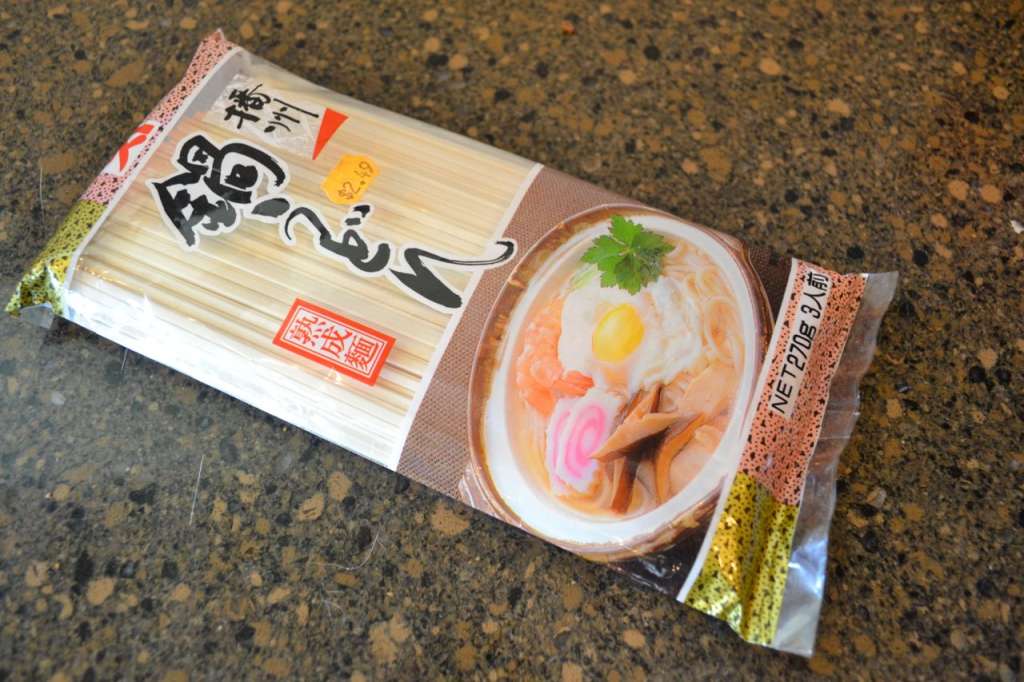 Dried udon noodles are inexpensive and easy to buy at most Asian supermarkets and specialty stores. 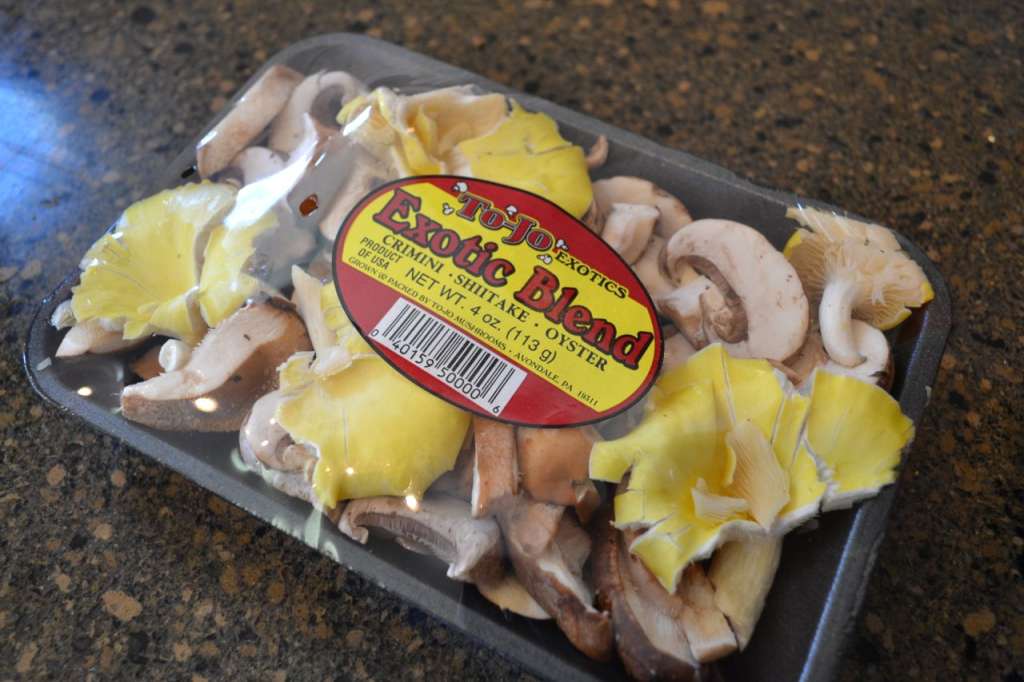 An “exotic” mushroom blend is perfect to use for this recipe.

Time to Get Cooking!

It’s important you’ve done all of your prep work up until this point, have your grill or grill pan preheated and noodle water boiling, as next comes the tricky part: cooking three different things more or less at the same time! 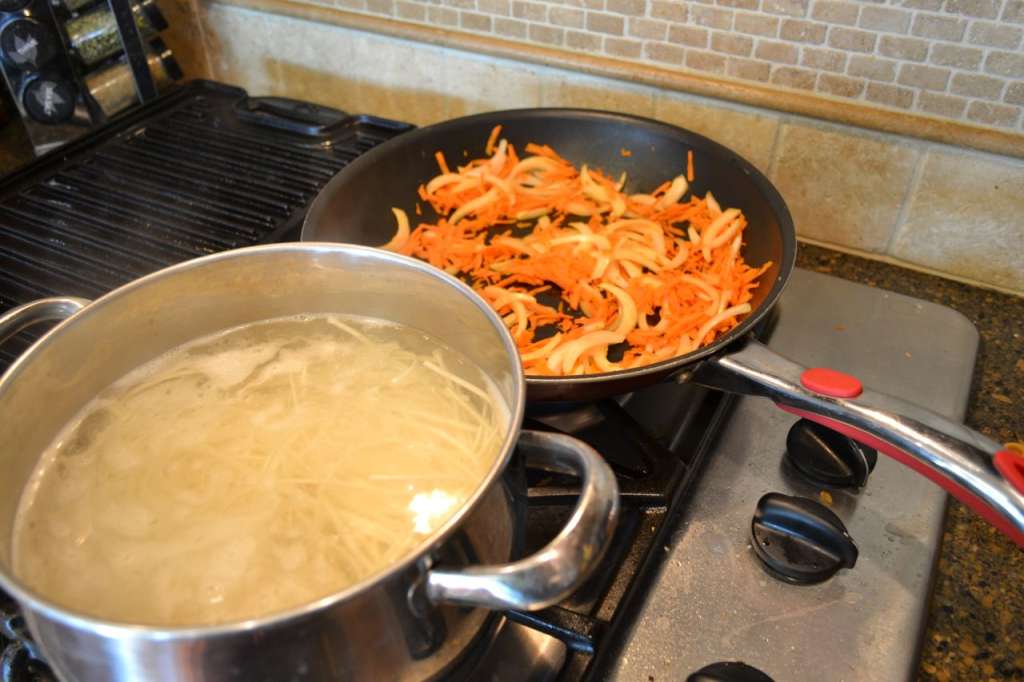 Don’t worry, it’s not as hard as it sounds, even if you’re working by yourself in the kitchen. Just read through the steps here and know what you need to do. It’s easiest if you’re doing everything on the stove top, using a grill pan as I’ve done for my tuna steaks (photos below):

If using a broiler or grill pan, lightly oil the pan first to keep the fish from sticking. Remove tuna steaks from marinade and place on grill, flipping once half-way through the cooking process. 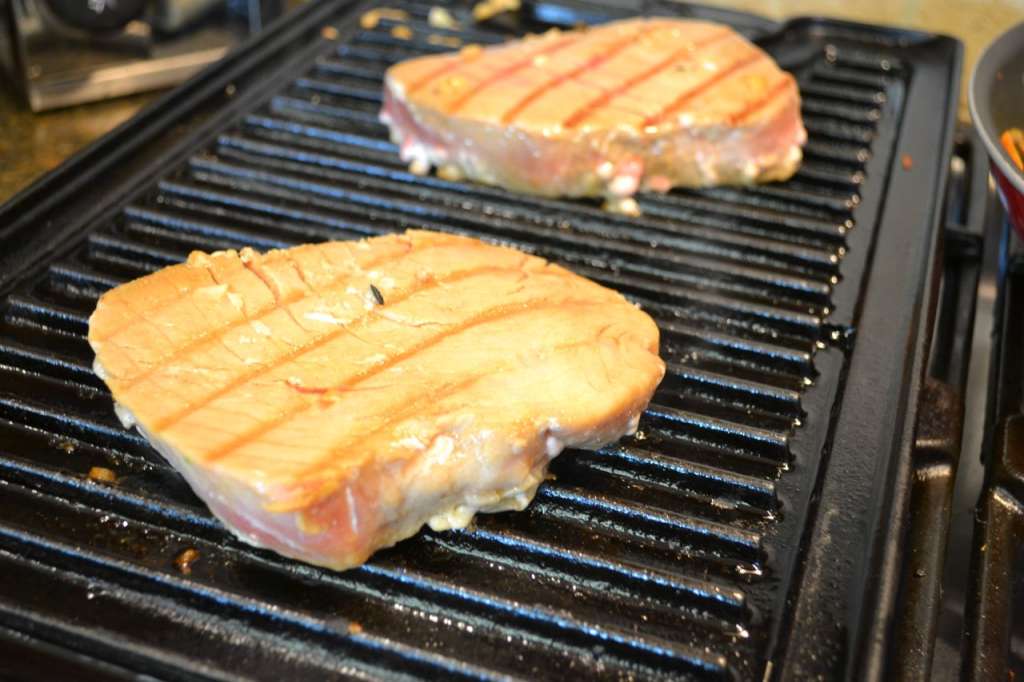 How long you cook the tuna depends on how you like your steaks: rare, medium or well done. For a medium/medium-rare tuna steak, only cook them 2-3 minutes per side. Cook slightly longer for medium-well and baste with additional marinade to keep from drying out. Remove from grill or broiler as soon as done and keep warm on serving plates while preparing the noodles. 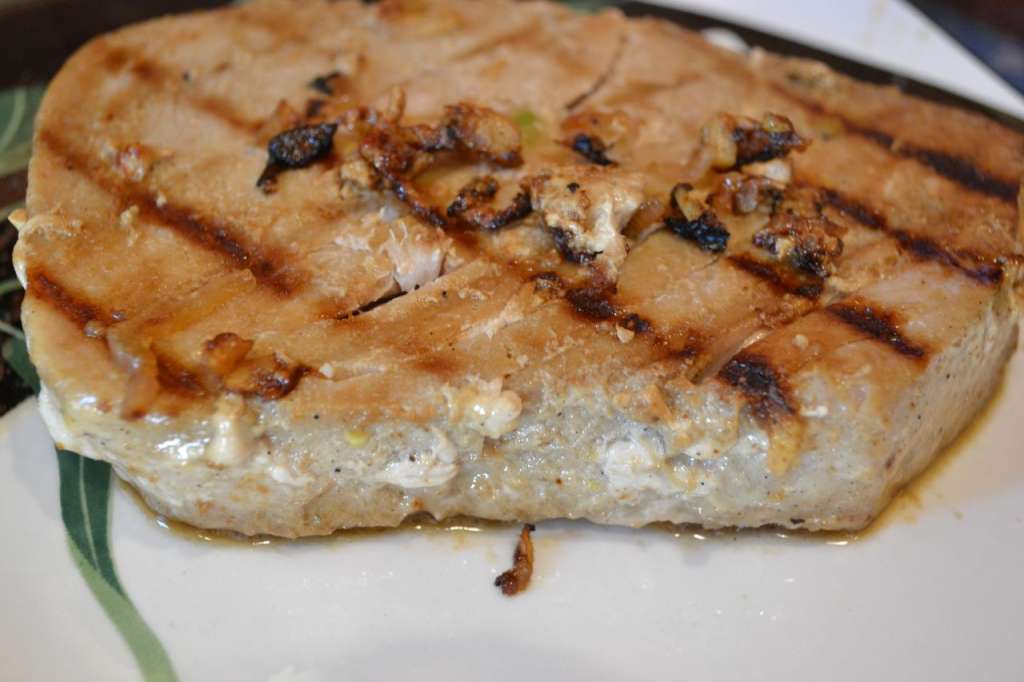 2. Cooking the udon noodles and blanching the greens:

Once the noodle water is at a boil, drop in the udon noodles. Watch and as soon as the water returns to a boil, add in one cup of cold water and your dark greens (spinach, kale, etc.). 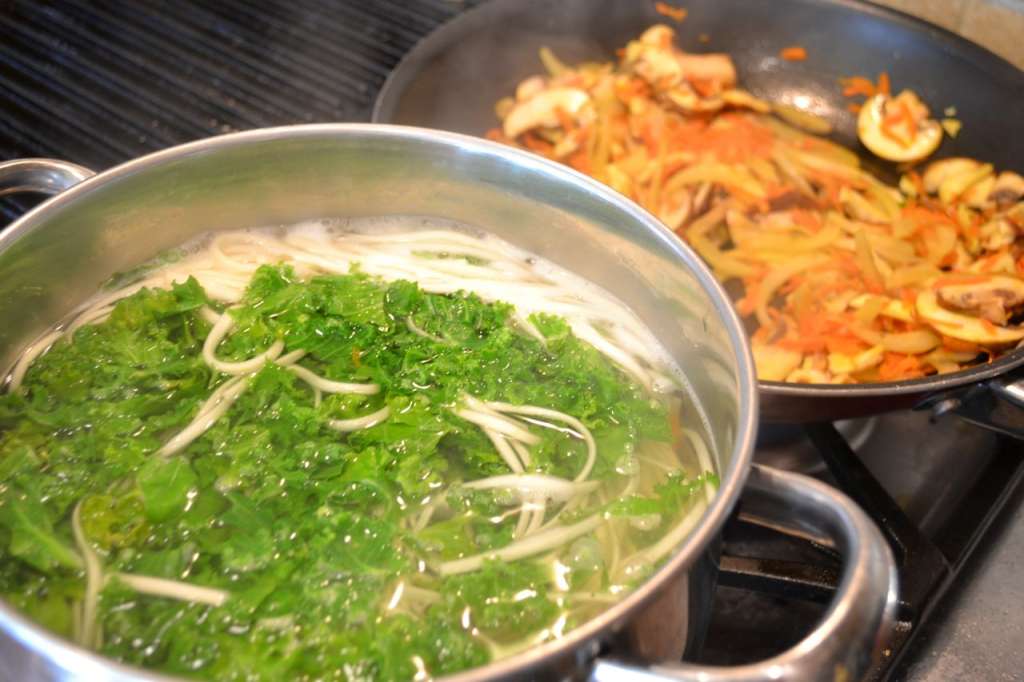 Wait for the water to come to a boil again, then repeat adding in one cup of cold water. Wait for it to come back to a boil one more time. Once it does, drain the noodles and greens and set aside to put into the stir-fry.

Heat 1 tablespoon of vegetable or peanut oil plus a splash of sesame oil in a wok or nonstick skillet. Add the carrots, jalapenos and onions and stir-fry until just beginning to soften, about 2 minutes. Next, add the mushrooms and stir-fry for an additional two minutes or so, until the vegetables are still firm but cooked through. 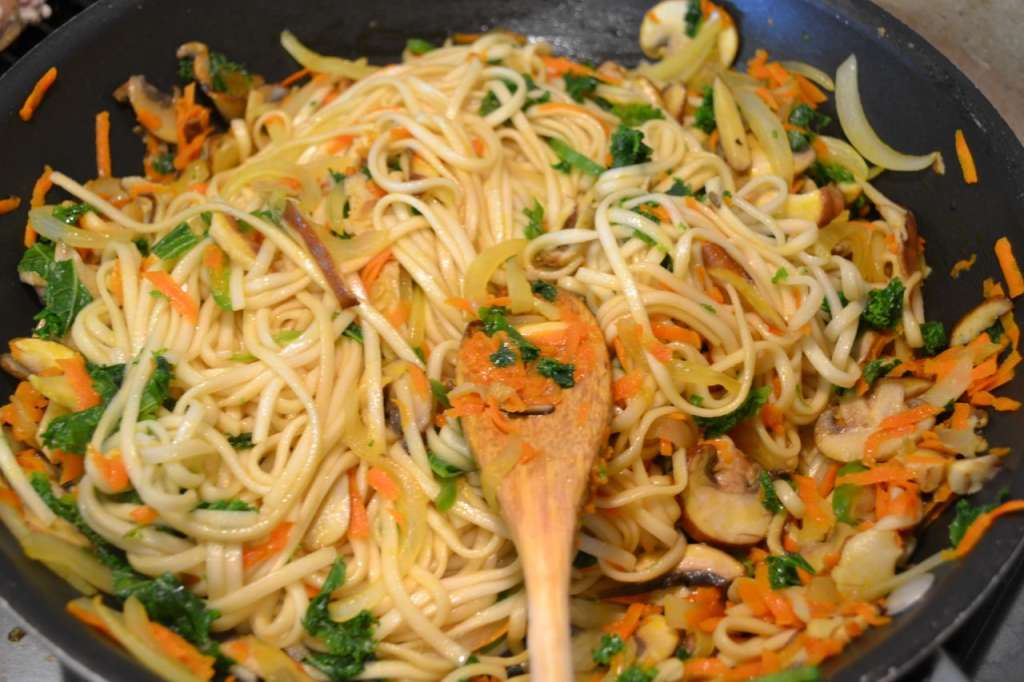 Add the drained udon noodles, greens and one tablespoon soy sauce, to the wok or skillet and stir to coat thoroughly with the oil and combine. Taste and adjust seasoning; you might want to add a little more soy sauce or a touch of sesame oil to finish the dish. Once everything is combined well and heated through, serve immediately with the tuna steaks. 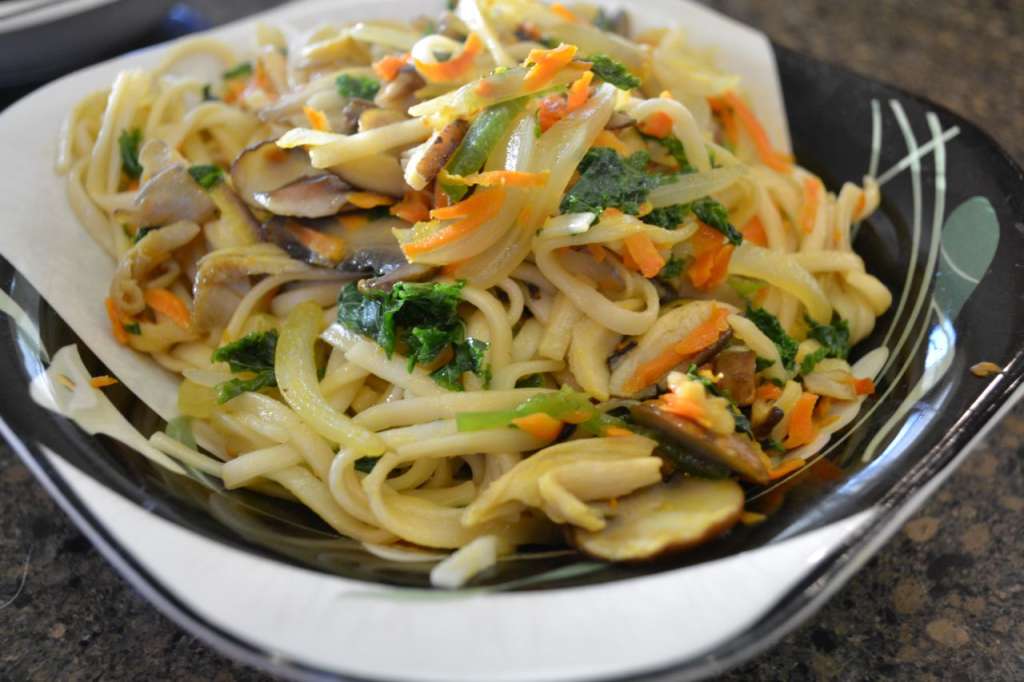 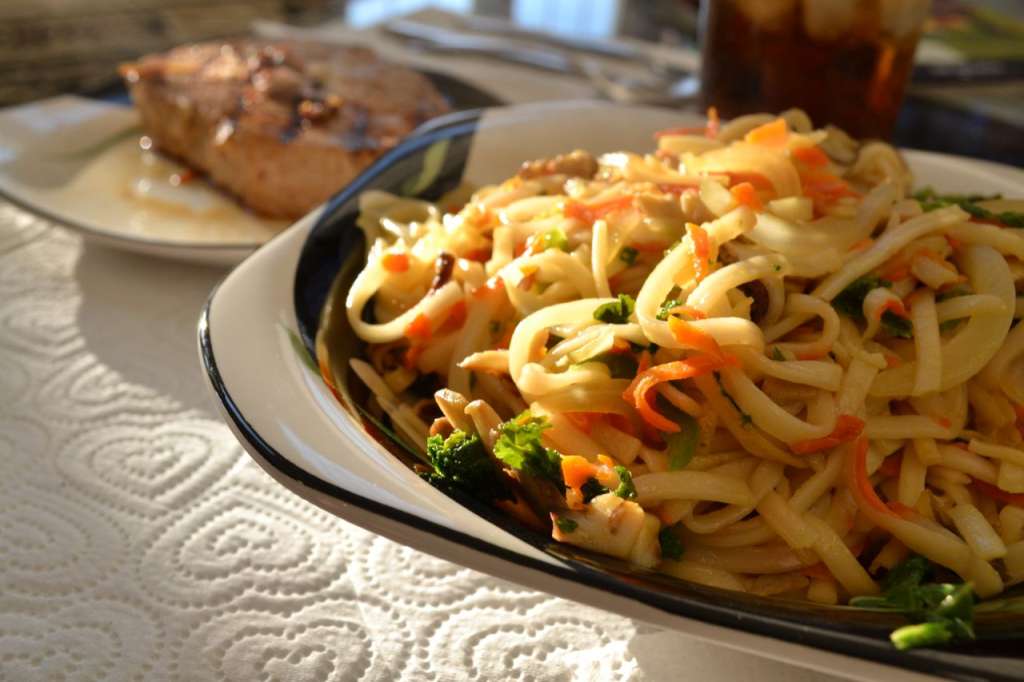