A Satisfying Pork Dinner to Feed the Family 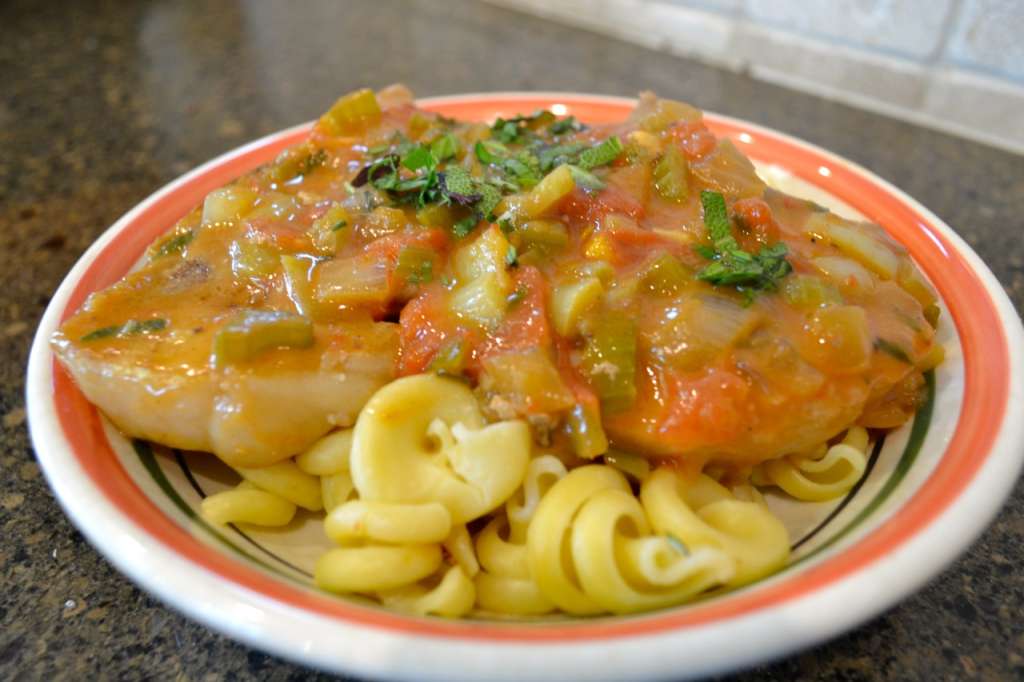 Pork chops are one of my favorite cuts of meat from the pig – but they have to be handled with care! Far too often pork chops come out dry, tough and overcooked, which is no fun to eat whatsoever.

One way to keep your pork chops tender and flavorful is to marinate them before grilling or pan-frying. Another option is to sear and then cook them more slowly in a flavorful gravy or sauce – which is what I’ve done here for my “Saucy Pork Chops with Italian Herbs”.

This recipe is actually a “remake” or remodeling of a recipe I found in an old Campbell’s cookbook, using their Cream of Celery soup as the base for “Creole Pork Chops”. But I found their original recipe rather bland and lacking in fresh vegetables and flavors, so I changed things around quite a bit, added more ingredients and came up with what I think is a much more satisfying dish. Why not give it a try and see what you think?

A brief note on choosing your pork chops 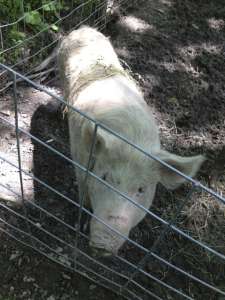 ve written in the past about how all of the pork I cook with and consume come from my mother’s own farm, where she raises pastured pigs that we have butchered exactly to our requests. One of the things we always ask for is to make sure our butcher leaves a nice outer layer of fat on the outside of chops to help keep them juicy and flavorful when cooking. Most of the pork chops you’ll find in the supermarket are “too lean” for my taste and trimmed of all of their outer fat. If you can get true pastured pork, know that its fat is actually quite healthy for you – so it’s perfect okay to cook with it and consume some of it, too! Or just trim off the fat when you go to serve the chops.

If you are using very lean supermarket pork, you may find you’ll need to use more cooking oil than I have in this recipe, in order to brown your chops without burning them. But if you can, try to find a market or butcher near you that sells true pastured pork – not only is it healthier for you but far more flavorful, and it’s a more ethical farming model to support.

Serves: 3 to 4 people, depending on your appetite and the size of the pork chops used
Preparation and cooking time: 60 minutes

Directions:
1. Season the pork chops with salt and fresh ground pepper. Meanwhile prepare your mise en place by chopping the vegetables and assembling all other ingredients. 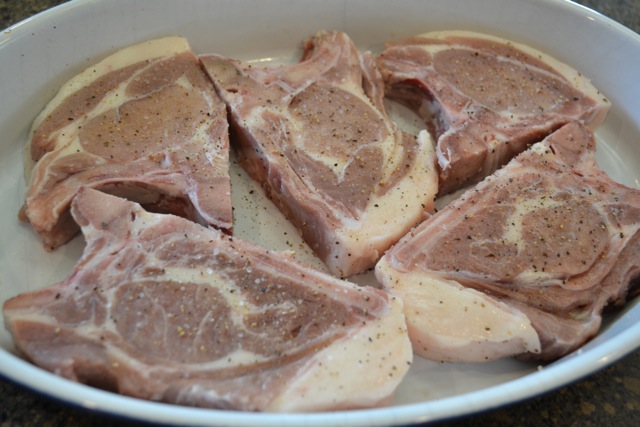 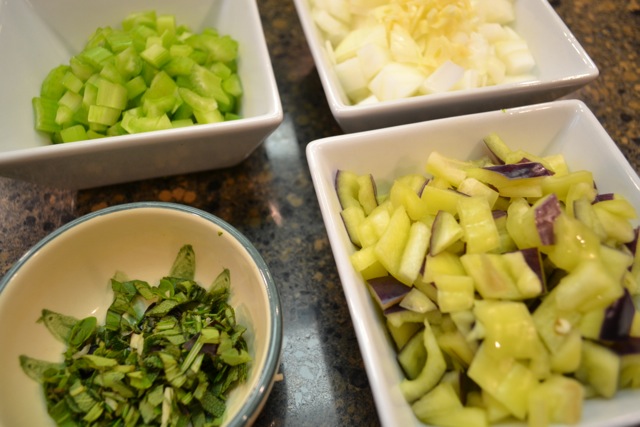 2. Bring a medium-sized pot of water to a boil and score the underside of the tomatoes with a knife. Drop the tomatoes into the boiling water for 30 seconds, then remove to an ice bath. Allow the tomatoes to cool to the touch, then peel them and chop them into a rough dice (scoring the skin makes them easier to peel.) 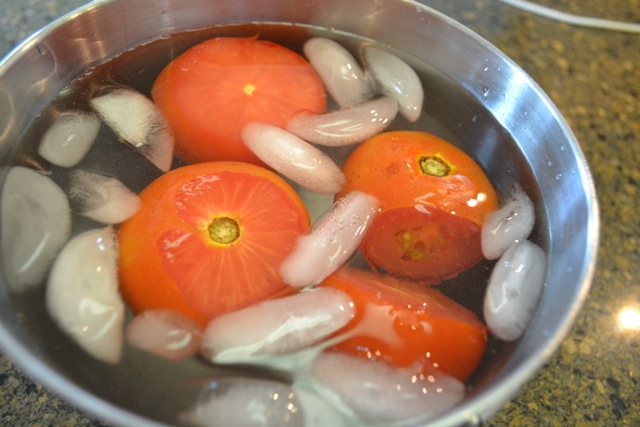 3. Put a large pot of salted water on to boil; this will be for cooking the pasta.
4. Meanwhile heat 1 tablespoon of oil in a saute pan or skillet large enough to fit all  of the pork chops in a single layer. Once the oil is hot, drop in the pork chops and cook until well-browned on one side. Turn over and brown on the other side, then remove to a plate or dish. Do not overcook or else the pork chops will be tough. 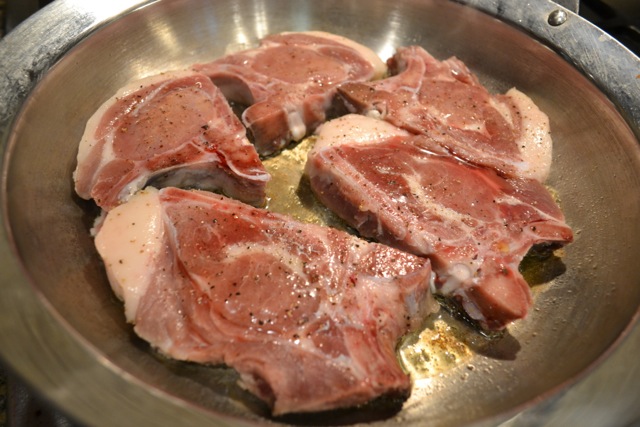 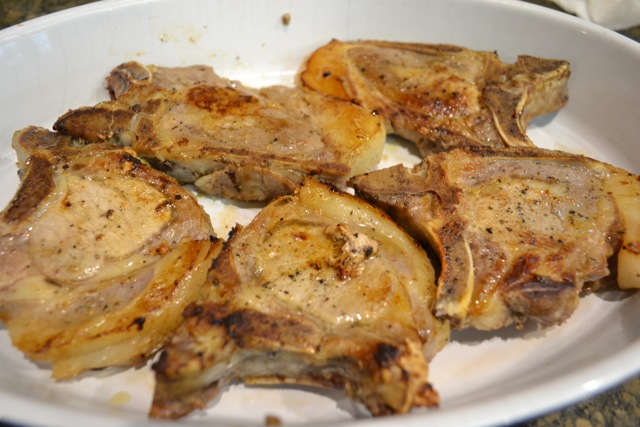 The chops, set aside, after cooking.

5. Add the remaining tablespoon of oil to the pan, reheat and then add onions, garlic and celery. Cook for about 2 minutes, then add the bell peppers. Cook until the onions are translucent and the vegetables are all tender-crisp, 3-4 minutes. Add the fresh chopped herbs and cook for another minute to release their flavors. (Save a little bit of the fresh herbs uncooked for final plating.) 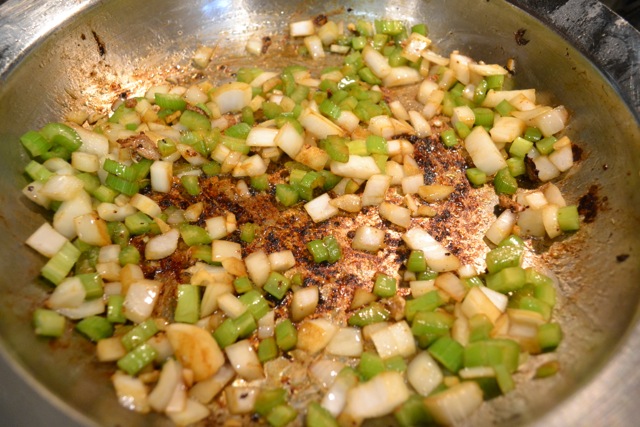 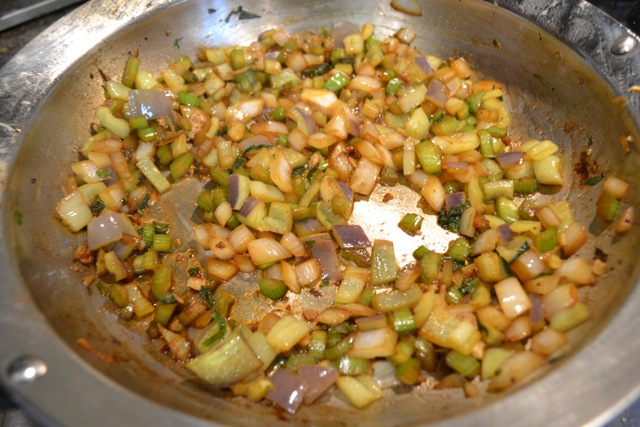 6. Deglaze the pan with the white wine, using a wooden spoon to loosen all the flavorful “browned bits” into the sauce. Allow the white wine to cook off, then add the Cream of Celery Soup, water and tomatoes. Heat to a boil then bring temperature down to a simmer. By now your pasta water should be ready so drop in the noodles and cook as per the pasta instructions (likely 8-10 minutes). 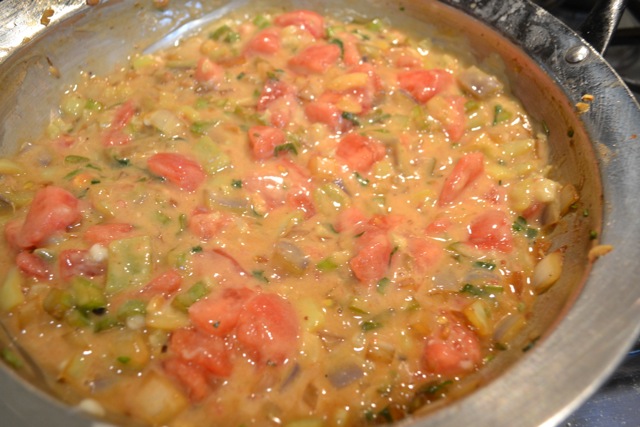 Adding the rest of the saucy ingredients. 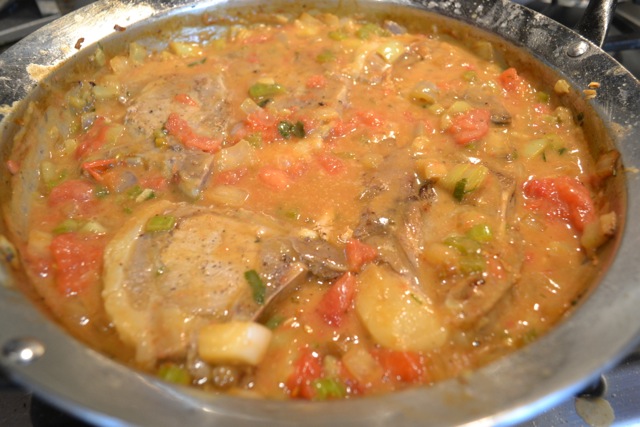 Returning the chops to the pan.

8. Serve the chops and the sauce on a bed of the cooked noodles, topped with the fresh parsley and the remaining chopped herbs. 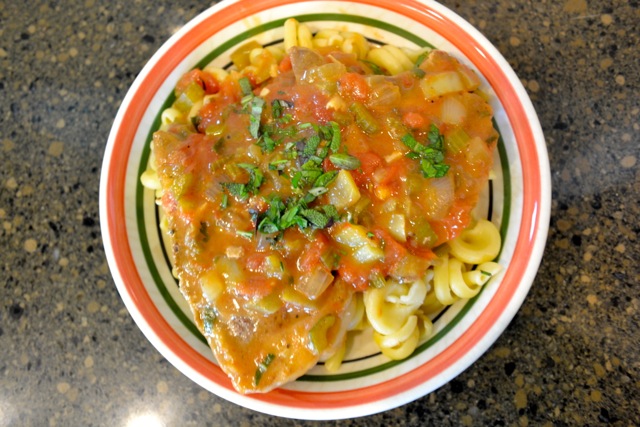