I’ve actually been on the road all week, so there actually hasn’t been much “What’s for Dinner” to post. Before I left, however, I made a couple big batches of food for my sweetie to eat while I was away. One was the sausage and lentil stew I posted about earlier. I still had about a pound of sausage defrosted after making that, so I wanted to use that up in something else but with a lighter touch than just more meat. I had some small scallops and other fish in my freezer so I searched around for a stew or soup of some kind to use them all, something different from a paella I’d otherwise make.

In looking on-line I found a recipe for Seafood Stew with Sausage, Tomatoes, Herbs and Wine by Emeril Lagasse that looked really good – and would let me use up some canned tomatoes and red wine I had in my fridge to use before I left as well. I also had some fresh basil, cilantro and parsley to use for my herbs – nothing like a good fridge-clearout recipe!

The original recipe called for squid and cockles along with the scallops, which I didn’t have, but I just used more scallops and a filet of cod. I also decided to do it over pasta instead of potatoes, since I had some fresh trottole I’d made recently and of course, the sweetie loves anything over pasta.  I made some quick fish stock from some shrimp and lobster shells I had stored in my freezer and that really added some more “oomph” to the recipe as well. 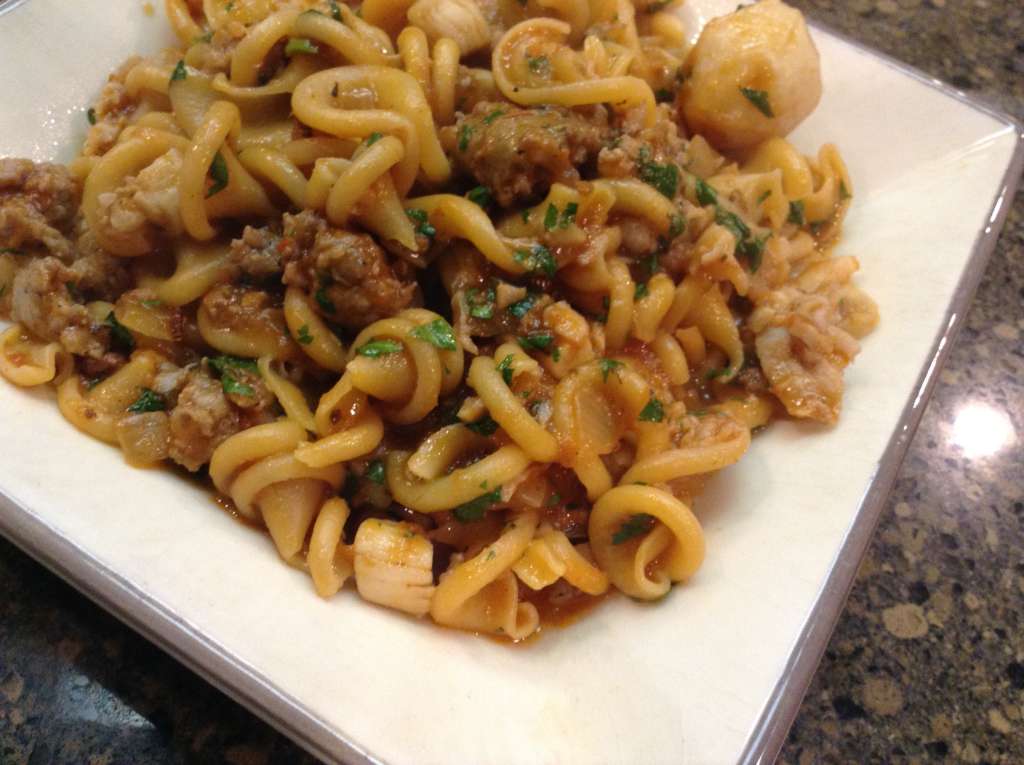 So yes, I made some tweaks to the recipe, but I can say it was really tasty and a nice change of pace from a typical seafood stew – or seafood pasta, as the case really was.  The recipe originally is from Emeril’s New New Orleans Cookbook, which I bought a while ago as a gift for my mom – but now I’m thinking I need a copy for myself!