What’s for dinner: Week of January 12

It’s been a pretty cold week here in South Jersey and as such dragging myself out of the house to the supermarket has been low on the priority list. So I’ve been doing a lot of cooking to use up what’s been in the freezer or the fridge and trying to make some favorite comfort food dishes as well.

Monday night I felt like some simple grilled tuna steaks and some Asian vegetable sides. I marinated the steaks in a soy sauce/ginger/garlic/sesame oil combination briefly before searing them on my indoor grill pan, which did the trick nicely.  On the side I served a chopped salad in a quick Asian dressing (rice wine vinegar, sesame oil, sugar, red pepper) and a favorite preparation of glazed yams from my old standby, The Japanese Country Cookbook. That book has some of my favorite recipes for easy vegetable side dishes so I always refer back to it when I’m looking for something simple and delicious to prepare. 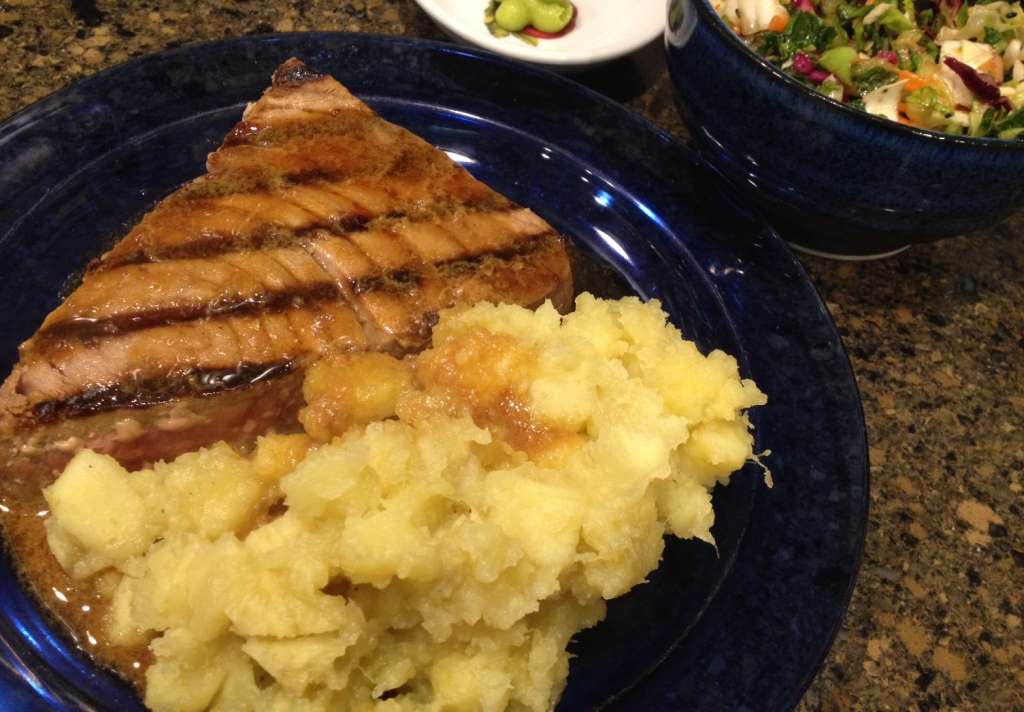 A little wasabi on the side was just enough!

For Tuesday, I had some pork chops I’d taken out to defrost over the weekend and put in some beer to marinate. But, what to do with them? Sweetie wouldn’t be home from work until late so I didn’t want to just grill them (plus we’d had the grilled tuna the night before.) I had the leftover fresh pasta I’d made on Sunday to use up, so I decided to do one of my classic casserole riffs on kapusta: a traditional Polish dish usually made with cabbage or sauerkraut, onion, seasonings and served with pork or sausage. I’ve done casserole versions with both potatoes and pasta before and I don’t really ever follow a recipe, I just kind of wing it based on what I have on hand. 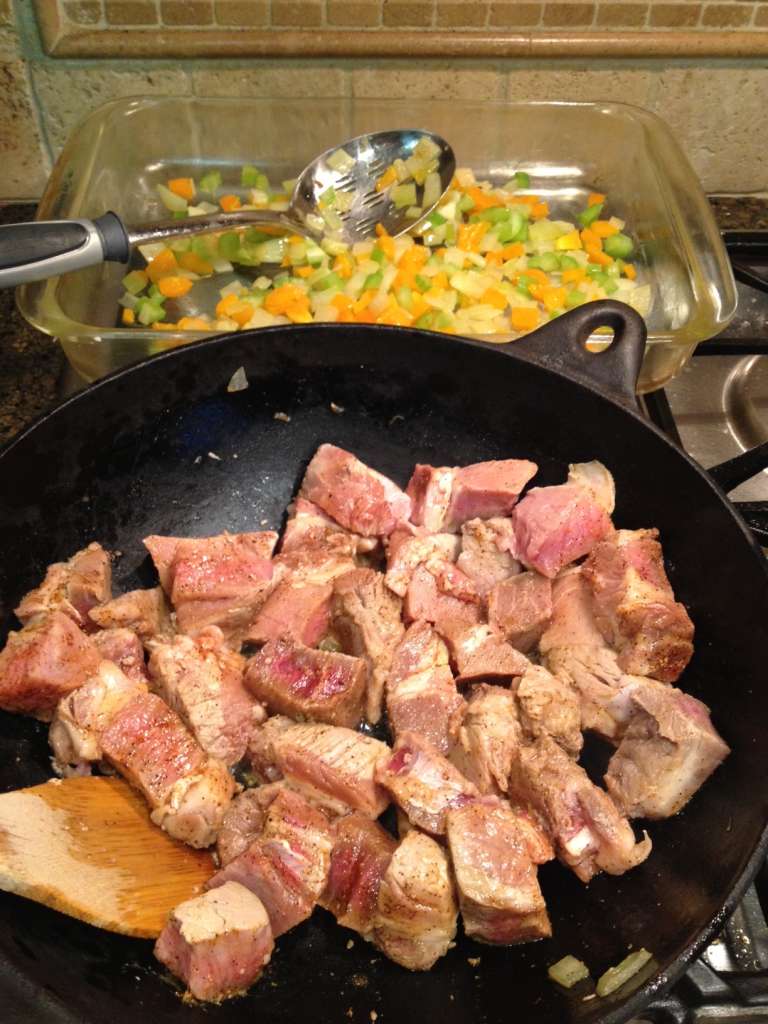 Sauteing the pork after cooking the veggies.

This time I started by cubing up the pork chops and chopping some vegetables: onion, pepper, celery, garlic. The veggies were sauteed in a little olive oil, then set aside in a buttered baking dish. Then, the pork was cooked in the same cast iron skillet as I’d used for the vegetables. This was some nicely marbled pork as it came from our pastured pigs, not a supermarket over-lean cut! Meanwhile I quickly cooked the pasta until not quite done, drained, and mixed in a buttered casserole dish with drained sauerkraut and a can of good old fashioned Cream of Mushroom soup. When the veggies were done, I mixed them and the pork in with the noodle mixture and baked in a 350F oven for about an hour (30 minutes covered, 30 minutes uncovered). 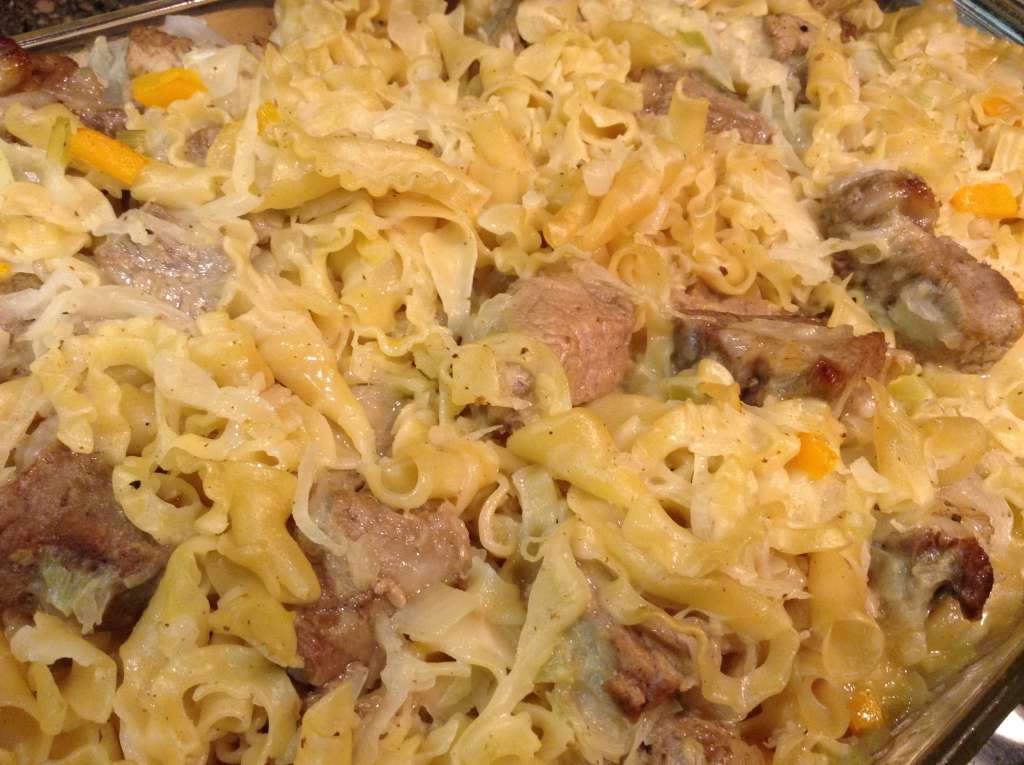 What’s better than a casserole in the wintertime?

The end result? Delicious! With the fresh-made pasta it was lighter than usual, and the pork chops were nice and tender from the overnight marinade in the beer. I love this dish and it’s always one of my favorites to make in the wintertime.

Wednesday I decided it was time to have a pizza night. I’d made some “Biga Starter” over the weekend, following the instructions in Marc Vetri’s Rustic Italian Food. I’d also followed his directions the day before to use it to make pizza dough, Neapolitan style, which is supposed to come out chewier and thicker than a Roman style made without starter. I don’t know, I wasn’t really happy with how the dough came out – it seemed too dense and wasn’t stretching out well. I’m guessing either my yeast was a little old or something was wrong with the flour/water/starter mixture. He does say in the book that it takes practice to get it just right, so this is going to have to be an ongoing experiment for me. 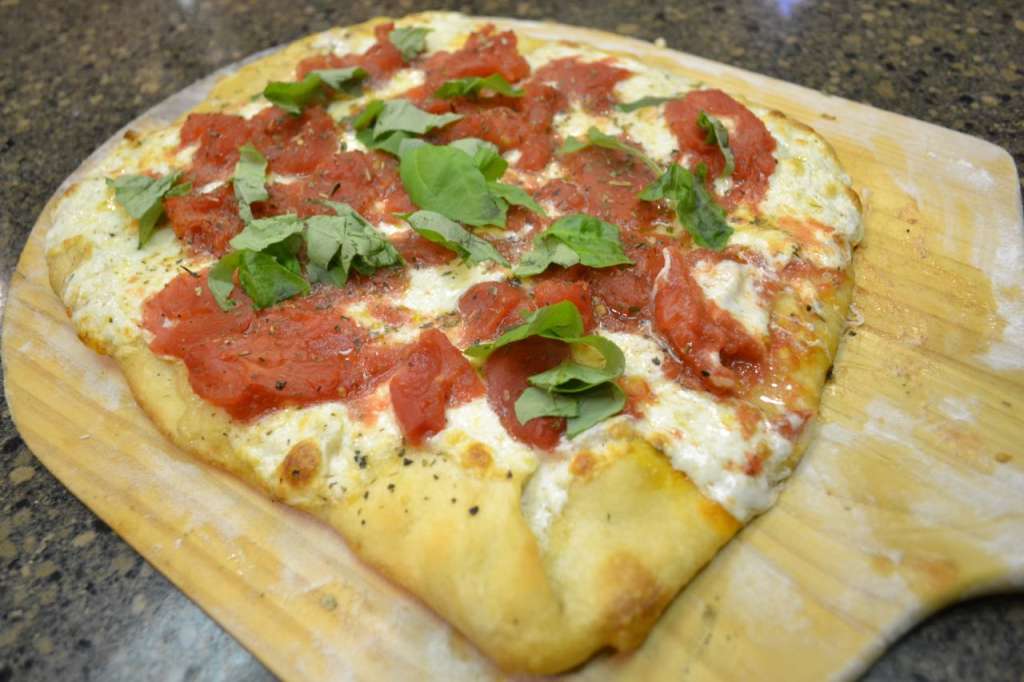 The pizzas came out still very thin and Roman style, which was not a bad thing but not exactly what I was aiming for. I made two: a standard tomato/mozzarella/basil pie, using just canned San Marzano tomatoes (not a sauce), and that was delicious. Simple perfection even if the dough wasn’t how I’d intended it to be. 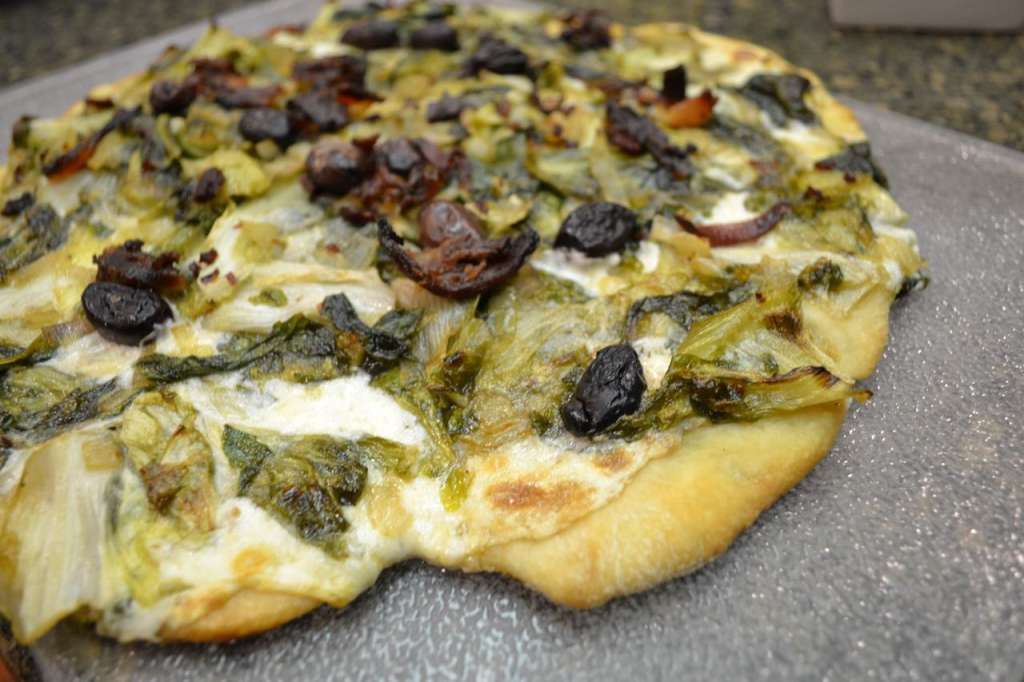 The other was a pie I was trying to recreate from when I was in Naples last year: mozzarella, escarole, black olives. I did saute the escarole with some bacon and onions first to give it a little more richness. I liked the flavor of this a lot as well, though again I need to work on getting the crust just right.

Thursday ended up being kind of a mess of a day; I wasn’t feeling well and our one indoor/outdoor cat got into a scrap with a feral cat in the neighborhood, thus requiring a trip to the vet’s office for a bite would. Sigh. So by the time I needed to start thinking about dinner I was not really up for anything elaborate. Again I wanted to make something which would reheat well for the sweetie on a late night, so I decided on a lentil and sausage stew with veggies: another great winter dish. I used a lentil and farro soup starter package from AG Ferrari Italian Foods, as I didn’t even feel like waiting a full hour or two to cook down the beans. This pack only took 30 minutes to cook after I first browned the sausage and vegetables. Instead of simply using stock to cook everything in, I used a mixture of stock, red wine and crushed tomatoes (the leftovers from the can I opened on Wednesday, of course!) It came out really rich and heavy – I couldn’t even finish my bowl and I’ve got a ton leftover in the fridge to last through the weekend. 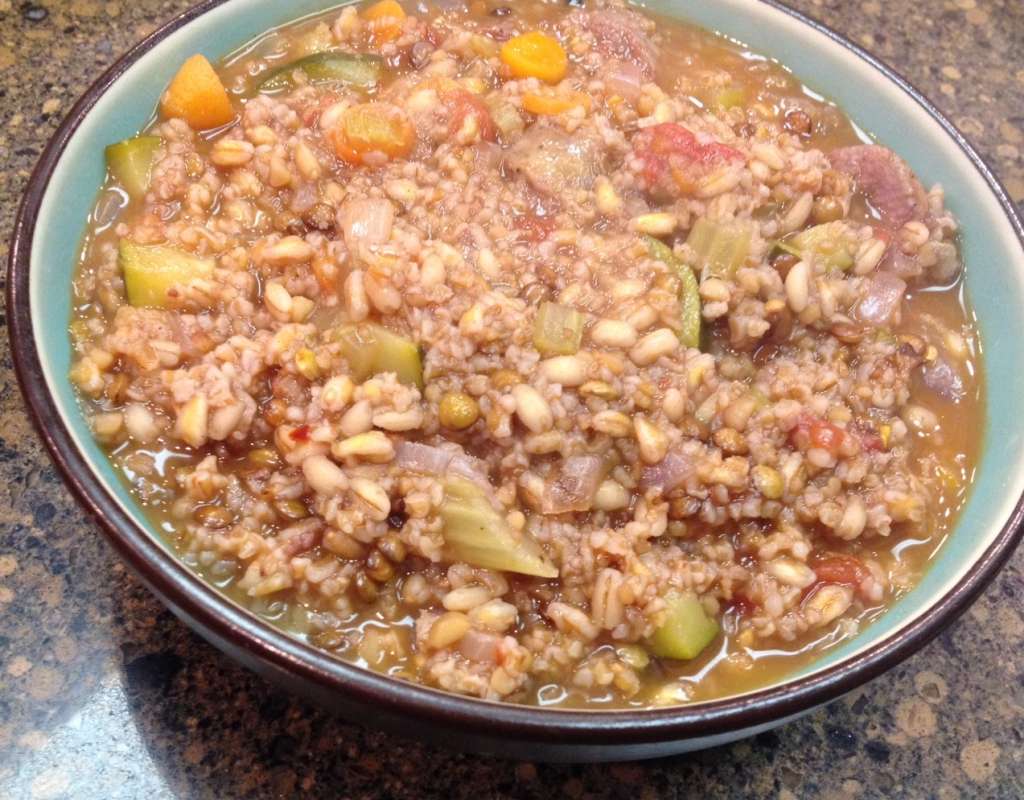 Sausage stew made with a lentil and farro soup starter.

So it’s now Friday and I have no idea what’s in the making for dinner tonight…but at least I finished writing up the week so far!