Thursday night was actually the 10th anniversary of the first date I had with my sweetie, Dave. That first date took place at Vietnam Palace in Philadelphia, which (as it had turned out in our earlier art class discussions) was a place we both considered one of our favorites in the city. I guess it was a good sign for our future together that we both loved this same odd little restaurant in Chinatown and enjoyed Vietnamese food along with many other cuisines. So yes, we are still together today, and it seemed as though we really should mark the occasion with another Vietnamese dinner.

Problem was it would be a late night in his office in Woodbury, and I was also filling in at the front desk, so going all the way into Philly on a Thursday night didn’t seem like a great idea. Yet last year a Vietnamese restaurant opened up in Woodbury itself, Bò Né, and we kept talking about wanting to give it a try. So, what better night for it?

Bò Né is right on Broad Street, just a block from Inspira Medical Center, and it does have a (very) small parking lot behind the building if you’re driving in. The inside of the restaurant space is clean and bright, if sparse—you’re not here for the ambiance, you’re here for the food. Upon entering I was quickly greeted by an older woman at the register who welcomed me to take a seat, which I did near the front windows after mentioning there would be two of us for dinner that night. An adorable young girl got up from a table where she was enjoying her own dinner (and watching videos on her tablet) to bring me two menus. Water glasses and some tasty hot tea soon followed.

The selections at Bò Né are fairly limited, but it’s a good offering of basics for an area where many are probably is not all that familiar with Vietnamese food. There are three appetizers to choose from: spring roll, egg roll, or chicken wings. Five different pho soups are offered, four with various types of beef and one with shrimp. There are also three rice and vermicelli dishes (grilled chicken, pork or beef), bahn mi, the house special Bò Né (steak and eggs) and a few “vegan ham & cheese” offerings. 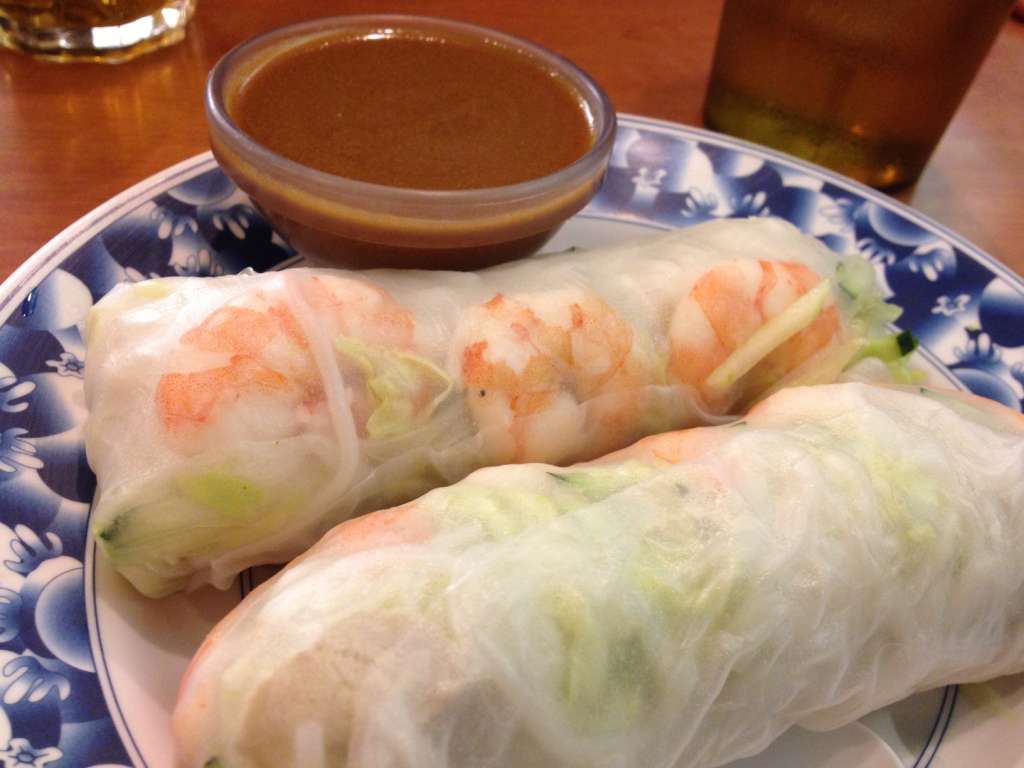 We decided to go all out in sampling all three appetizers and then order two of the pho soups. First out were the spring rolls, two very large soft rolls filled with noodles, shrimp, pork and cucumber. It came with a nice peanut-based dipping sauce as well. These were light and filling, maybe not as delicate as other versions I’ve had but certainly tasty.

The order of chicken wings was a plate of six wings fried and then topped with a house-made sweet chili sauce. You definitely get that little funky whiff of fish sauce on these which could turn off some people not used to the flavor, but I quite enjoyed them. 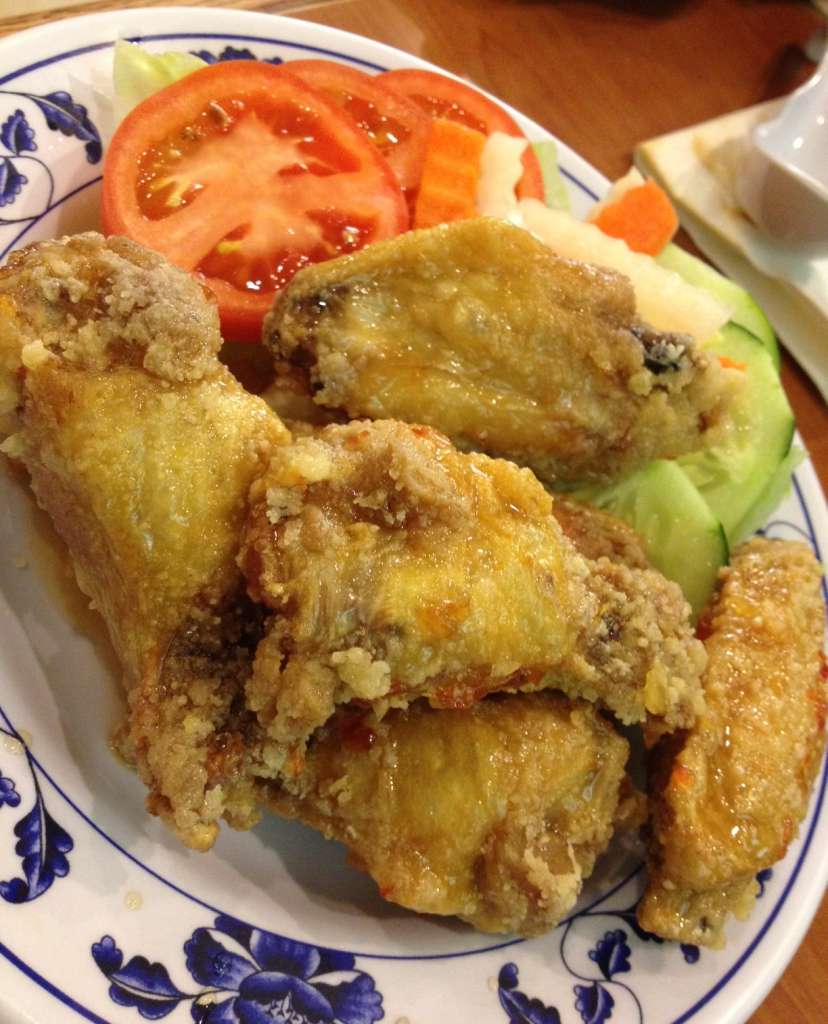 My favorite appetizer however were the egg rolls. These were wonderfully hot, crispy, and not at all crispy. Best, however, was the filling in the egg rolls which was really rich and flavorful. I’m going to be craving these on a regular basis now. The appetizers came with  some crunchy pickled vegetables, sliced tomato and lettuce. 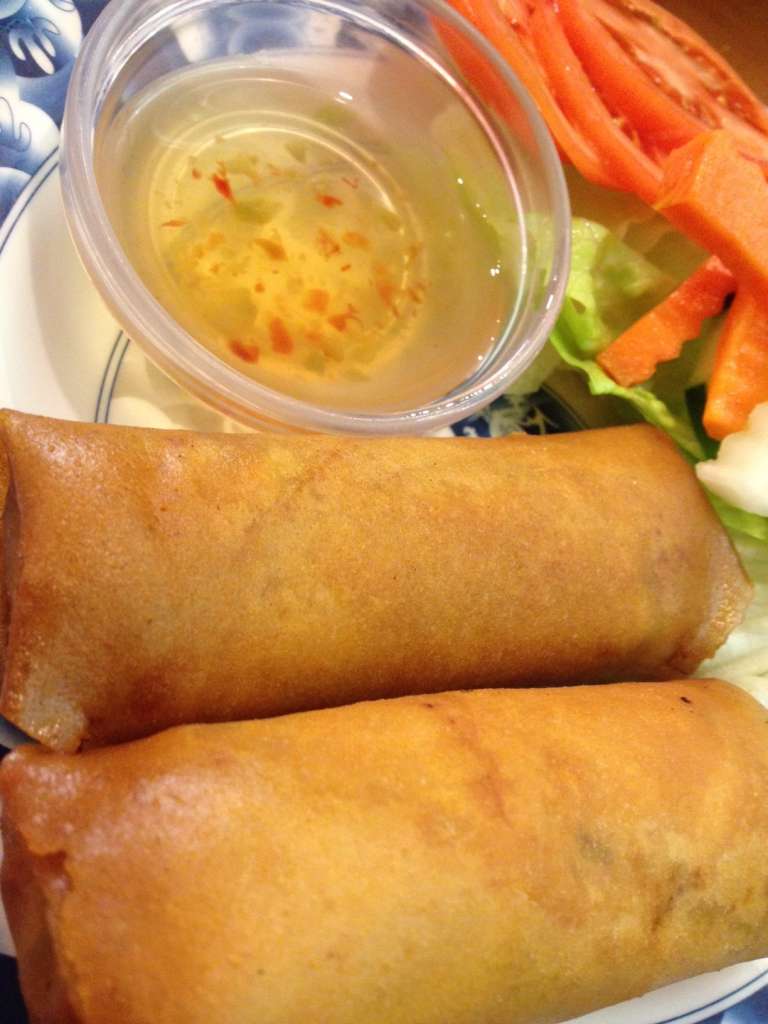 Everything came out very quickly, including our pho as we were still picking away at our chicken wings. I ordered the pho with flank steak; my sweetie got the pho with beef meatballs. I’ve read some reviewers complain that the pho bowls aren’t as big here as you might get in some other Vietnamese restaurants, but for the price I thought they were still quite generous. I could only finish about half of mine and had to take the rest home for lunch the next day. I am not a pho expert, I will admit, but I thought the broth had a very satisfying and rich flavor. It came with all of the fresh toppings you’d expect including Thai basil, jalapeno slices, lime wedges, and bean sprouts. The flank steak in mine was decent, but I actually liked the meatballs in my sweetie’s pho even more. 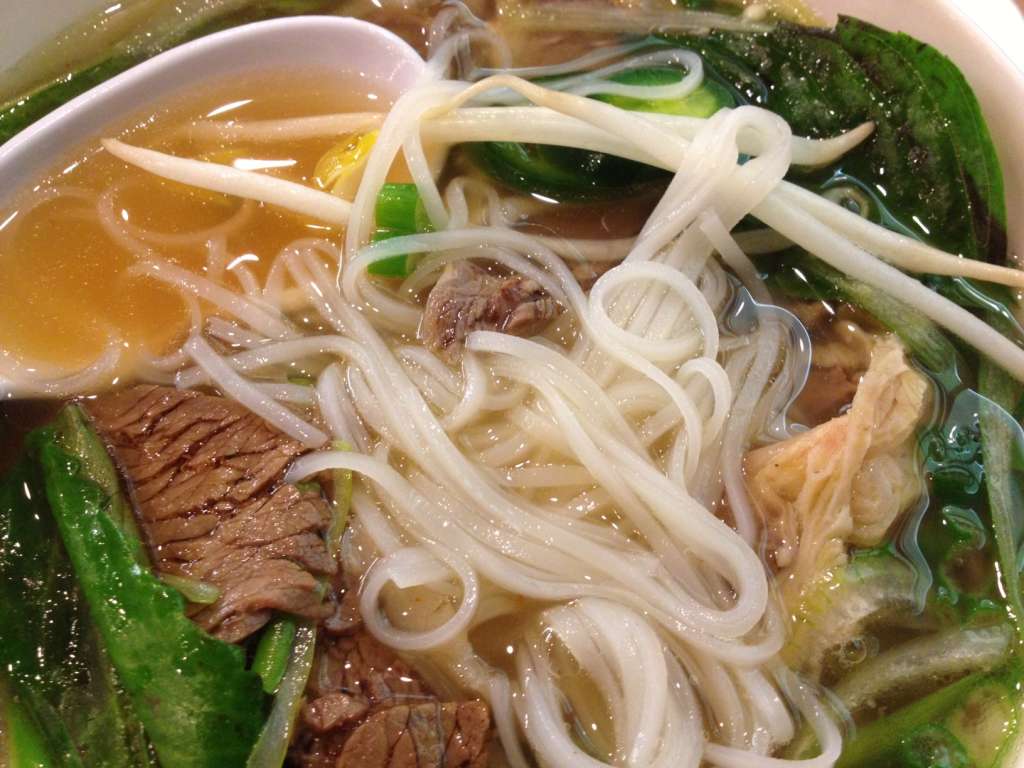 All in all our total bill was just over $30, which seemed quite reasonable given we had three appetizers and two soups with beef. Overall it was a really delicious meal and I’m just so happy to finally have a place where I can get good Vietnamese food close to work, and closer to home. I’m looking forward to trying the bahn mi soon and some of the other menu offerings as well.