Well, for those of you who check in here now and then, you’ve probably noticed it’s been very quiet here over the past few months. No, I haven’t given up on this blog, it’s just the second half of 2014 ended up being a tough one for me in a lot of ways and I had to put a lot of online writing and blogging on the backburner.

This was coupled with the fact that several of the other sites I used to write for (including Squidoo and Yahoo! Contributors Network) went under in the summer. So I ended up having to spend a ton of time finding new homes for older articles, and reformat Squidoo articles that were transferred to HubPages, and then I decided I really don’t care for the HubPages platform and just…overall it was very overwhelming and left me in need of a serious break from all of this. I got back into creative writing which was a nice change of pace and it’s left me feeling a bit refreshed and reenergized for 2015.

So, with that in mind, I kind of want to try something new here in the new year. Yes, I’ll continue posting restaurant reviews (when I have some to share) and occasional recipes. But I’d like to focus more on simply food journaling; keeping track of new recipes as I try them, new cooking techniques I’m exploring, on a more day-to-day basis. I’m hoping this will encourage me to spend more time exploring the huge collection of cookbooks I have that is constantly growing instead of just always going for the same old same old things. And hopefully it will be nice to look back at the end of 2015 to see what all I’ve managed to cook and create anew.

So, that is my plan going forward. I won’t promise posts EVERY DAY but I’m going to try to be more diligent even in short updates. I hope you’ll enjoy the process and journey with me, and happy new year! 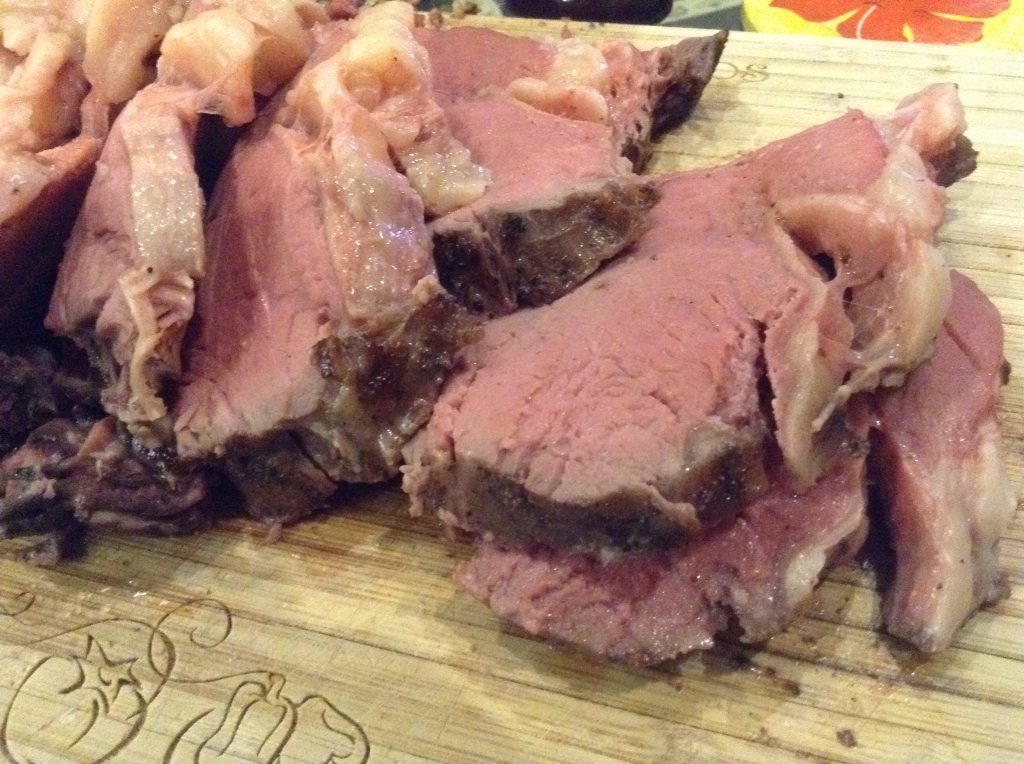 To start with, here’s what I tried for the first time on New Year’s Day: a boneless ribeye roast cooked sous vide. I’ve had my Sous Vide Supreme for over a year but really only started actually playing with it in the past few months, after attending an excellent class on the technique hosted by StudioKitchen in Philadelphia. I’ve really fallen in love with sous vide cooking and this roast was a prime example of why.

Every time before when I’ve tried to do a beautiful roast like this in the oven (or god forbid the crockpot) it either comes out dry and overcooked, or seriously raw in the center. With the Sous Vide Supreme I just vacuum sealed the roast with some garlic, red wine, olive oil, salt and pepper. (I triple-seal the bag when adding liquid to make sure nothing leaks out/the vacuum is tight.) Set the temperature at 138F and cooked it for 6 hours. After that I just seared it quickly stove-top with some butter and extra salt and pepper. It was the BEST beef roast I have ever made in my life! Tender, moist, and perfectly medium-rare throughout with just a thin crust on the outside. Being able to make a roast like this is reason enough to learn to cook sous vide at home. I served it with some simple mashed potatoes and a green salad for a perfect New Year’s feast.