This past week I was approached by members of the “Misha Vengers” GISHWHES team, and asked if I would review a recipe for “Pasta with Jam Sauce”. If you are not familiar with GISHWHES, it is an annual international scavenger hunt organized by actor Misha Collins (of Supernatural fame). The event annually raises tens of thousands of dollars for charity and promotes many acts of kindness—as well as pure insanity.

How could I say no to helping to support a great cause? Well, I agreed to the review before I saw Misha’s son West actually devising and preparing the recipe…

I must say, Salvador Dali would certainly have approved of the recipe in its surreality, as well as West’s preparation of the dish which is thoroughly surreal performance art. But how could such a concoction of pasta, strawberry jam, tomato sauce, and Goldfish crackers (among “so many” other things) actually taste? 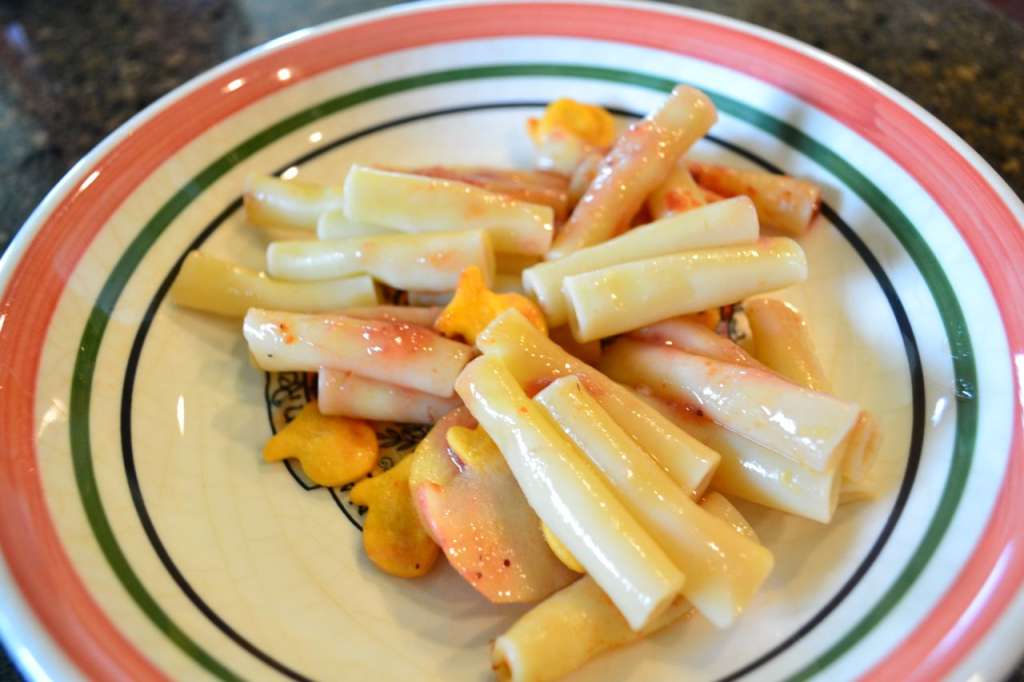 Pasta with Jam Sauce, as prepared by Team Misha Vengers.

I noted that Team Misha Vengers’ preparation of the recipe did feature some variations from the original. For one, they substituted ziti pasta for West’s original preference of rotelle. They also left out (mercifully?) the chocolate chips and popcorn, and thinly sliced the apple. I do not want to know if they took a bite out of it first or not. The pasta was lightly dressed in the sauce, making it easier to notice the texture of the jam and the light sheen it left on the noodles.

I was actually surprised that the resulting flavor combination was reasonably inoffensive. The jam gave the nicely al dente pasta a sweet, almost dessert-like flavor—sure to appeal to young kids. The tomatoes only revealed themselves with a slightly acidic finish to clean the palate before the next bite. The Goldfish crackers were a bit out of place, but I could imagine finding them a bit more interesting for this dish if perhaps first oven-toasted with a little balsamic vinegar glaze, then crumbled on dry at the end. After all, one of the signature pasta dishes at Sfoglia restaurant, featured in their cookbook Pasta Sfoglia, is made with fresh strawberries, tomatoes and balsamic vinegar. So it is not that outrageous a concept.

I found that a glass of Roxanne Dry Rose from Auburn Roads Vineyard & Winery was a perfect accompaniment to the pasta, bringing out the strawberry notes of the sauce—and washing away some of the more disturbing elements of the dish.  Would I recommend you try to prepare Pasta with Jam Sauce at home? Only if you are wearing a pair of safety goggles and have a young chef ready and willing to assist you in the kitchen—and of course, a full bottle of wine on hand for the adults present.

This entry was posted in Cooking and tagged pasta, recipe test. Bookmark the permalink.