Last Sunday the sweetie and I spent the afternoon hiking the gorgeous nature trails at Tyler Arboretum. It was a great way to end the Fourth of July weekend in relative peace and quiet, away from the hordes down at the Jersey Shore. 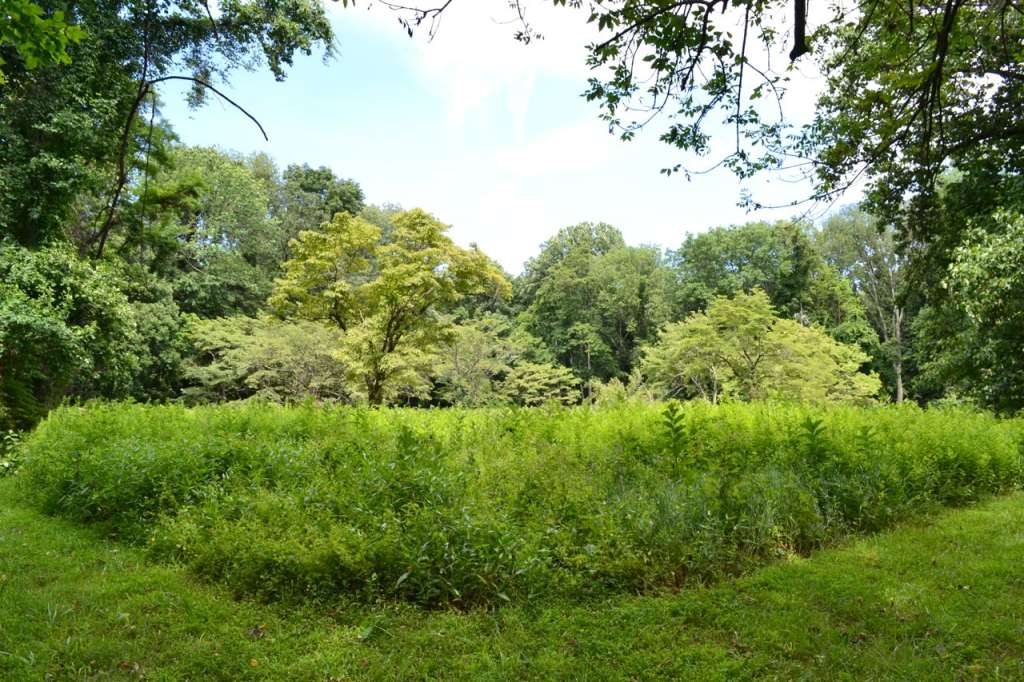 After three hours communing with nature, however, we were really, really hungry—and in need of a refreshing beverage! While I am not a huge beer enthusiast, there is something about a lot of physical activity in the great outdoors that just calls for a frosty cool one. And if I’m going to drink beer, I like it to be fresh made and preferably straight from a local brewery. From my online research of the Media area near Tyler, Iron Hill Brewery seemed like a perfect choice for an early Sunday dinner. At the end of the night I can say it was definitely worth the stop for their refreshing beer, but the food was a little hit-or-miss. Some things were great but I think you do have to be careful what you order, and stick more to bar-food basics.

We got to Iron Hill at just about 4pm, beating out what we soon saw to be the serious dinner crowd. We were seated reasonably quickly (the staff was trying to deal with a 30-women party who’d also just arrived and were turning their seating arrangements into a YouTube-worthy fiasco.)  We ordered our beers quickly; I’m fond of Belgian-style beers so I went for the seasonal Belgian Witbier and it was just what the doctor ordered. Somehow it soothed the soul and my tired feet as well as cooling me down from the heat. The sweetie got the Hefeweizen, which was also really tasty from what I sampled. Yum. I’d definitely come back on a hot summer day for more of the beer here. Even if it isn’t the most complex, it’s very crisp, clean and refreshing. 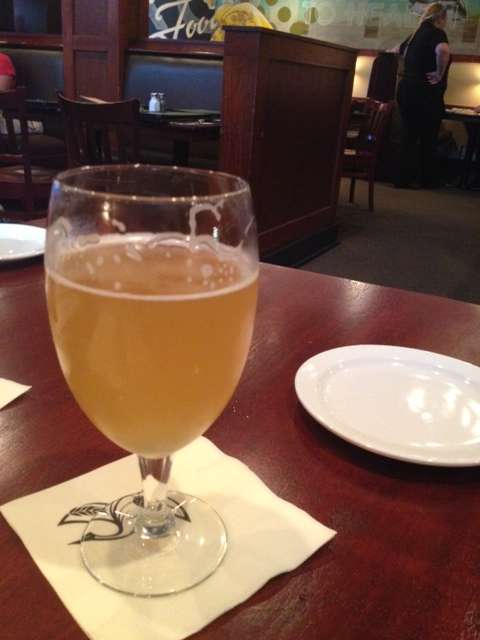 The menu at Iron Hill is quite huge…I daresay much larger than it needs to be. There are soups, small plates, appetizers, burgers, salads (big and small), “shared plates”, entrees, “Brewhouse Favorites”, pizzas, and sandwiches. Oh and kids selections, too. I get trying to have something for everyone, but sometimes less is more. And a place that offers too many options often only does certain things really well, and the trick is finding what those things may be.

To start, I decided we should try the “Signature” Egg Rolls since that seemed to be a specialty of the house, and so we went for the “Brewmaster Sampler” which featured one of each of the Oktoberfest Egg Rolls, Cheesesteak Egg Rolls, and Buffalo Chicken Egg Rolls. These came out fairly quick and with a selection of four dipping sauces: horseradish sauce, stone ground mustard sauce, blue cheese dressing and buffalo sauce. The Buffalo Chicken was my favorite but these were all really good. I chowed down on my half of each way too fast because I was so hungry; next time I’d savor them a bit longer. But they were definitely a good pick.

For entrées, the sweetie went for their Barbeque Glazed Baby Back Ribs (full rack), with sweet potato fries and slaw. The sweet potato fries were awesome—like, seriously some of the best I’ve had, big nice steak-cut fries that were crispy on the outside and still sweet and tender on the inside. The ribs were good, but nothing I’d say was truly memorable. 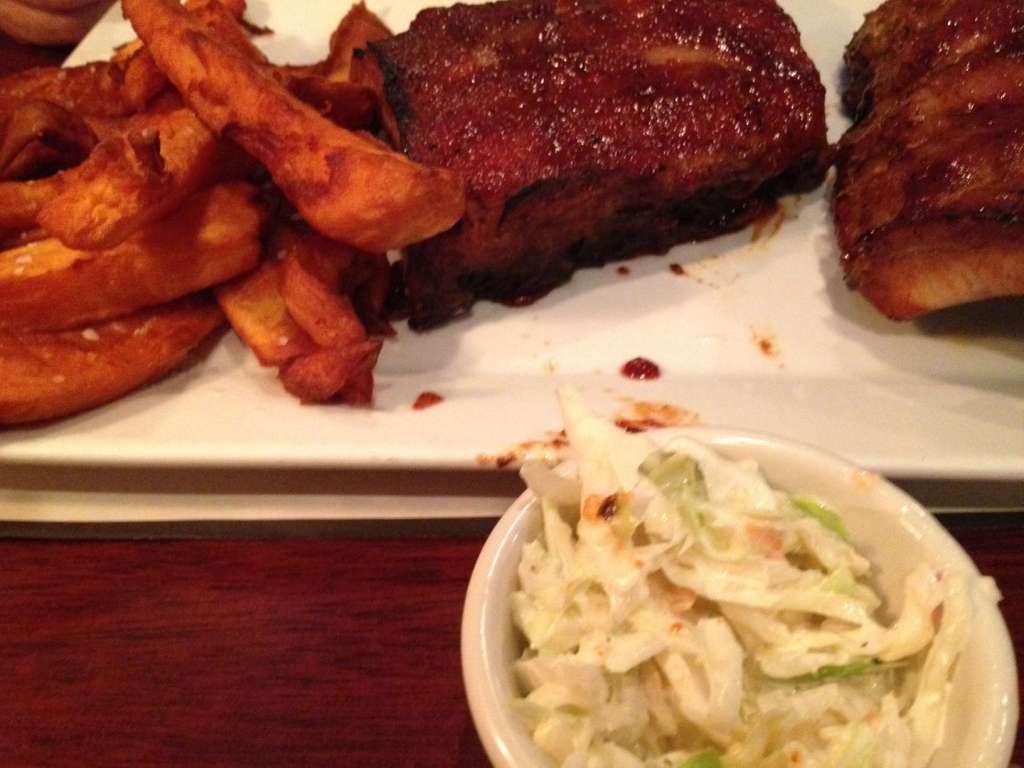 Even so, I ended up eating a good amount of his ribs because I was pretty disappointed in the entrée I ordered, the Red Chile Rubbed Flat Iron Steak served with (supposedly) smoked cheddar mac-n-cheese, tri-colored peppers and onions and chipotle-lime sauce. I ordered my steak medium-rare, as to cook a flat iron steak past that is really a crime and pretty much guarantees you will only get leather. Well, my steak came out pretty much medium-well if not well done; there was hardly any pink left in the center and it had been pre-cut for service, so what juice their might have been in the meat was long gone. Honestly, I would have sent it back for so badly missing the temperature I’d requested but there was that 30-person party nearby that had already put in their order…and I hate seeing food wasted. So I chewed down what I could and mostly at the decent mac and cheese and peppers. I guess there was some sauce on the plate but it wasn’t what I was expecting and I think I definitely didn’t order well. 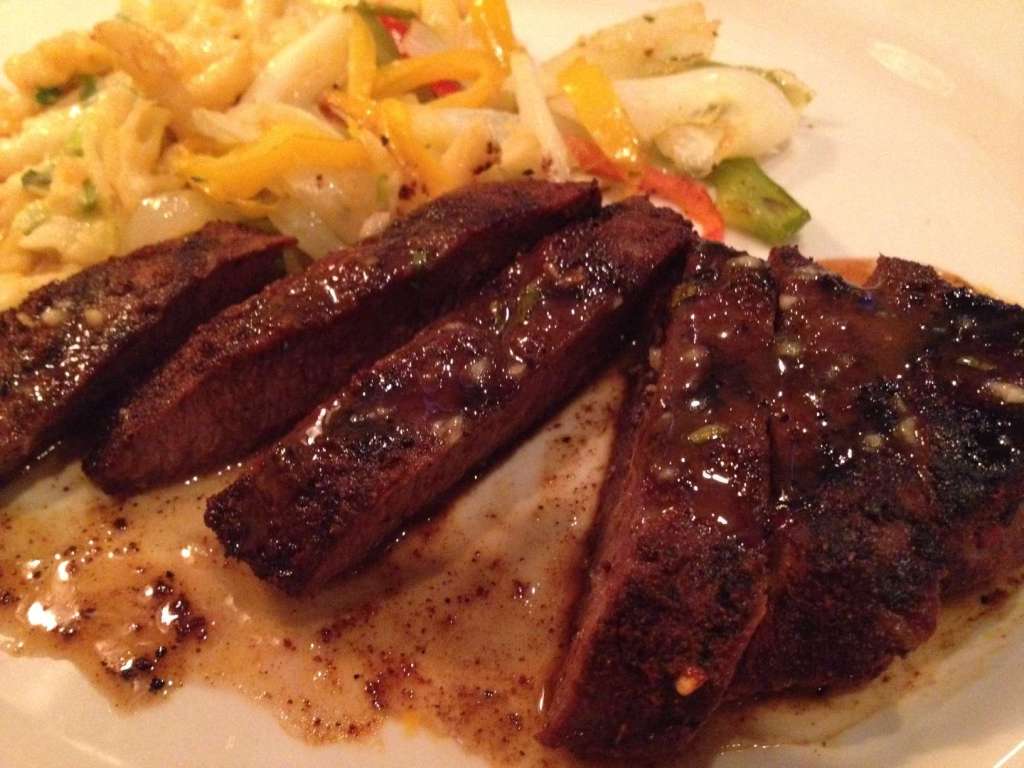 I was pretty full after the egg rolls and what I picked off the sweetie’s plate anyway. But sweetie still wanted dessert, so we got the “Triple Chocolate Hill” to share (double fudge brownie, vanilla ice cream, peanut butter-caramel sauce, chocolate sauce and whipped cream). This was pretty much your classic chocolate-and-ice-cream decadence dessert, but it did help settle my stomach which was giving me some trouble after wolfing down too much heavy fare…maybe I should have stuck to a big salad after all of that walking earlier in the day? 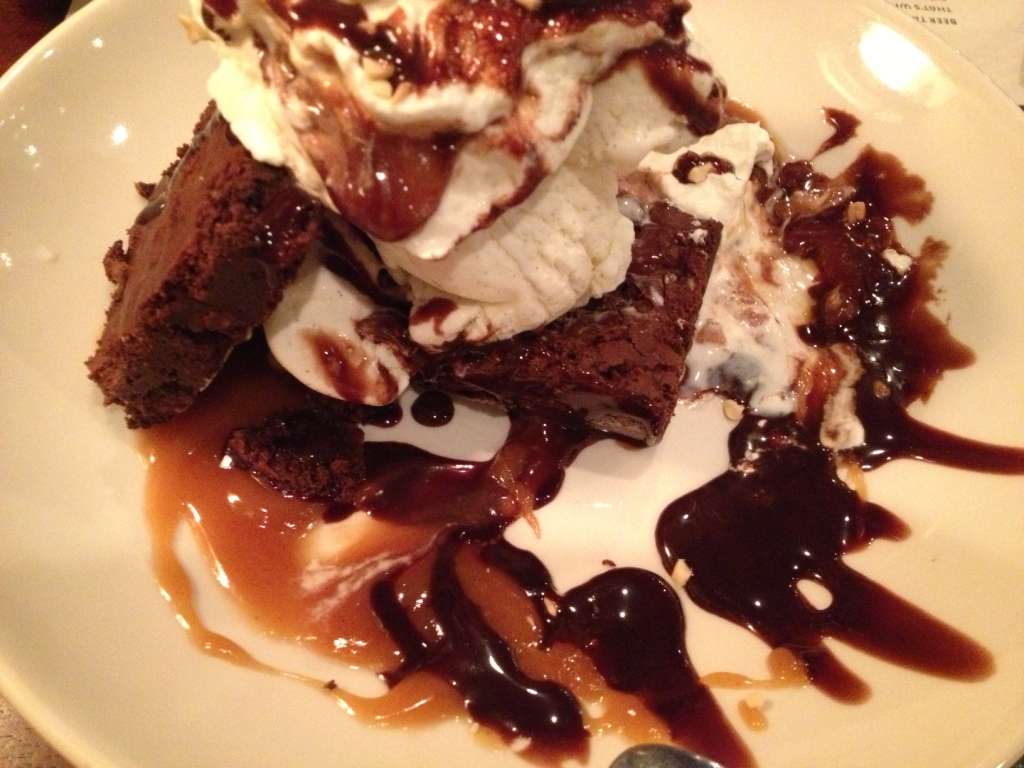 Our bill was over $100 (before tip) with 2 beers each, the shared app, 2 entrees and shared dessert. Overall, I’d give Iron Hill Brewery in Media and “OK” rating, but not a great one. The beer is worth enjoying and I think if you stick to the classic bar food offerings and apps, you’re probably safe. Apparently they do a great burger which I should have ordered, maybe, according to some reviewers on Chowhound who also expressed disappointment in their entrees. So with that in mind I’ll be a little more conservative in what I order next time around.