Earlier this year,  Mullica Hill favorite Naples Pizza moved from its longtime location at The Old Mill Antique Mall across the street to the Warehouse, a former sweet potato warehouse now converted into restaurant and shopping space. I had never actually been to Naples (the restaurant) before, despite now living in the immediate vacinity for four years. With the recent closing of Toscana in Mullica Hill, the sweetie was curious to give Naples a try to see if it would be a suitable “replacement” for satisfying that occasional Italian-American food craving. And I have to say after one visit there with the sweetie and his father R, I was really pleasantly surprised by how good it was. 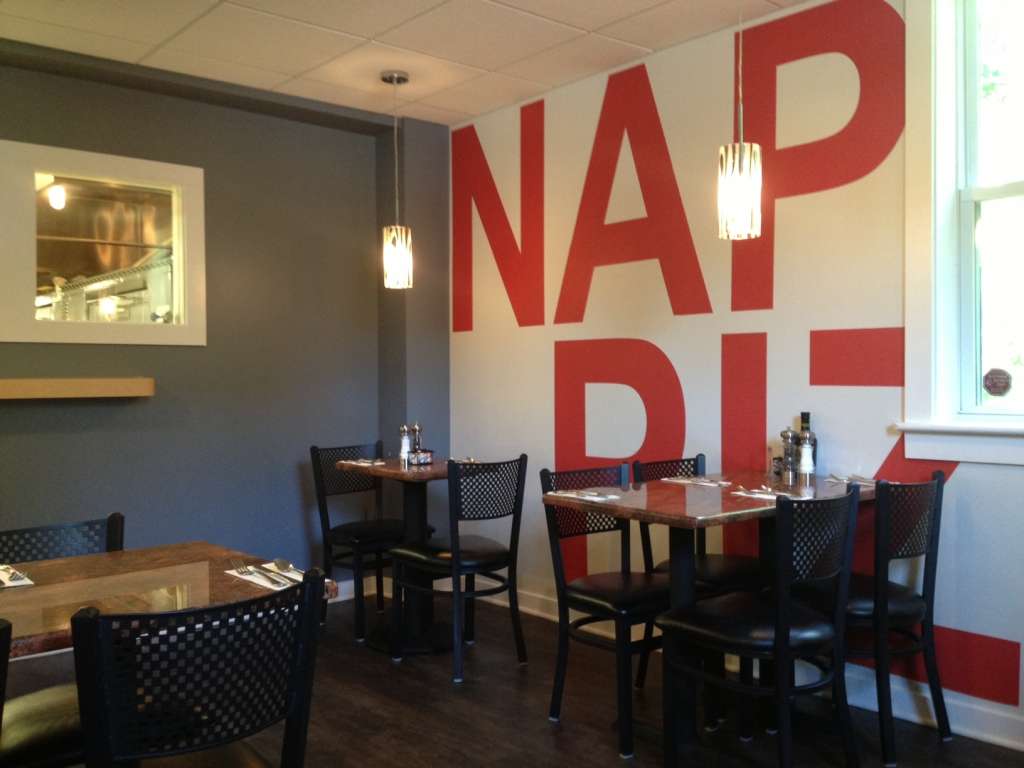 The new restaurant space is quite large and welcoming, with a modern-yet-rustic feeling to it: dark wood floors and tables, solid color walls, windows looking into the kitchen behind the counter where take out and pizza orders can be placed. We were there at lunchtime on a Sunday which was not especially busy and promptly greeted by our server, Anna, who ran through a few specials of the day before we looked over the menu.

Of course, pizza dominates about half of the menu, with a variety of classic and non-traditional pies offered in large or medium sizes. There is, for instance, a “Chicken Cordon Bleu” pizza with chicken, ham, mozzarella and bleu cheese, or even a “Potato Skin” pizza with potato skins, bacon, cheddar, mozzarella and sour cream. There are wraps, calzones, standard Italian and American fried appetizers, sandwiches, burgers, and then your typical Italian-American entrees like chicken or veal Marsala, Scallopini or Parmigiana. Additionally there are steak entrees and pastas offered with a variety of sauces and shapes. Nothing really unusual or different from what you’d expect to find at such a restaurant, but certainly there should be something for just about everyone on the menu.

Although for review purposes I really should have ordered a pizza, I just wasn’t in the mood for one. I wanted to try one of the seafood offerings hoping it wouldn’t be too heavy.  The Mediterranean Pasta sounded like a good possibility, with clams, shrimp, mussels, calamari and lump crabmeat in the sauce of my choice (marinara, white wine or Fra Diavolo) over the pasta shape of my choice. I really like Fra Diavolo—when I make it myself—but often at restaurants around here it is way too garlicy for my intolerant stomach to handle.  So I was really happy that when I asked our server how garlic-heavy the sauce was, she said it was more pepper-spicy than garlicy, but that the chef made it fresh for each meal and could tone down or completely leave out the garlic if I wished. That definitely got me excited and willing to give it a try! Sweetie went for the Chicken “Garden Fresco” with artichokes, sun dried tomatoes and mushrooms in a garlic white wine sauce. R ordered the Stuffed Steak, prepared with bacon, provolone cheese and a marsala cream sauce. 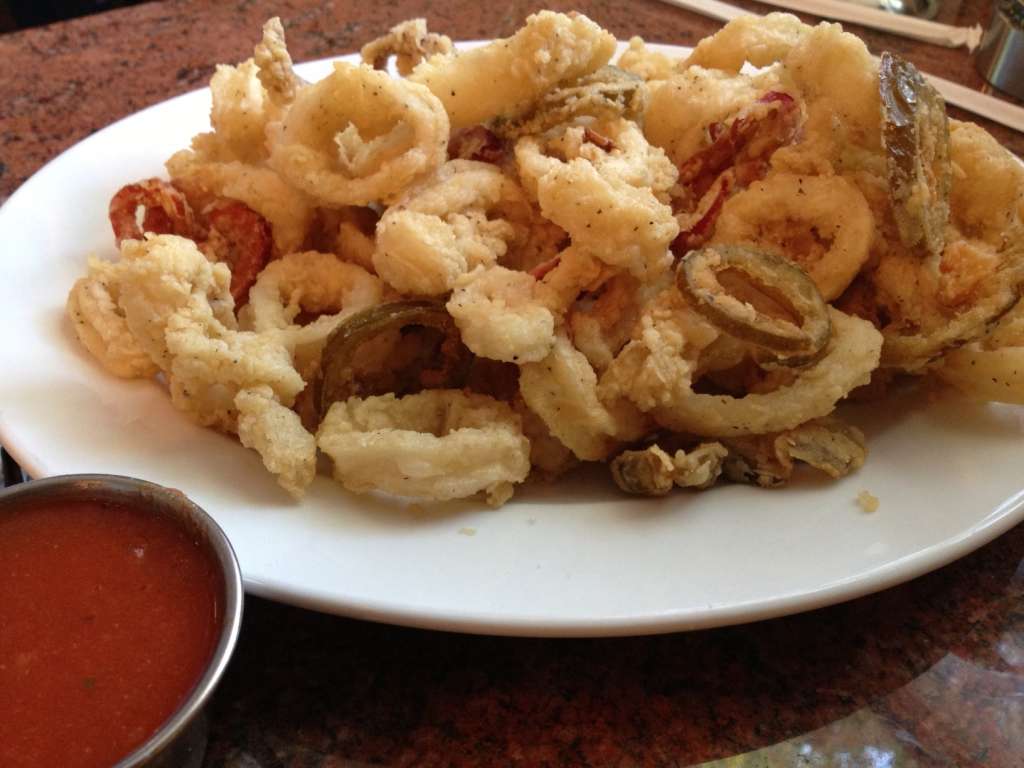 We got an order of the fried calamari to share as an appetizer and it was quite good. The seafood was mixed with mildly hot peppers, both fried in a light and tasty breading that was super-hot right out of the fryer, and not at all greasy. It was served with a small cup of marinara sauce—definitely too small for the serving! Anna asked if we wanted some more and that was a definite yes. I also think it would have been good to be served with a few lemon wedges, but that’s a minor point; I’ll just ask for them next time. We also had some hot fresh pizza bread rolls which were too good to not enjoy.

All entrees at Naples come with a side salad, which is a pretty standard offering of iceberg, romaine, red onion, tomato, cucumber and seasoned croutons. Fine as a little taste-cleanser after the fried appetizer, but nothing particularly noteworthy. 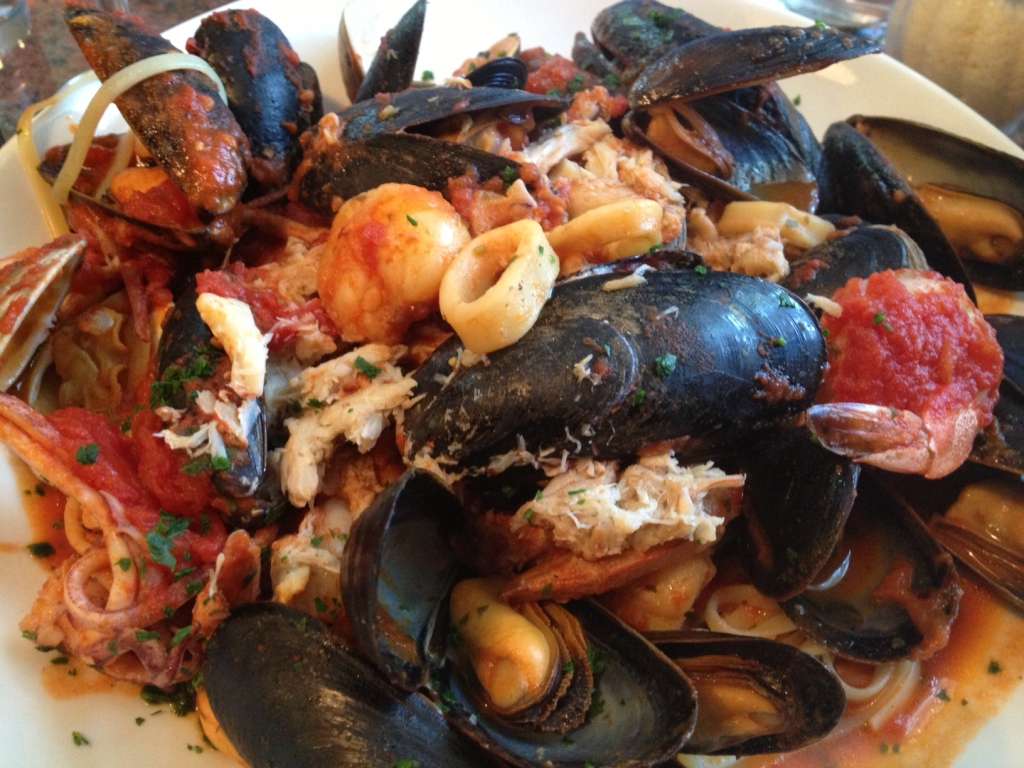 There was not a long wait until our entrees came out, and mama mia! My Mediterranean Pasta was HUGE! For $18.95 they definitely weren’t skimping on the seafood. But it wasn’t just generous but actually really delicious. The best part was definitely the crab, which was true lump crab and not skimpy bits from a can. I found lots of big chunks of tasty, sweet claw meat in the sauce, which was flavorful and perfectly spicy without any notable garlic flavor. The chef got some serious thumbs up from me for making the sauce so perfect to my order. Also, the linguine was just right—a little al dente, clearly not precooked and just dumped on a plate as orders came in. 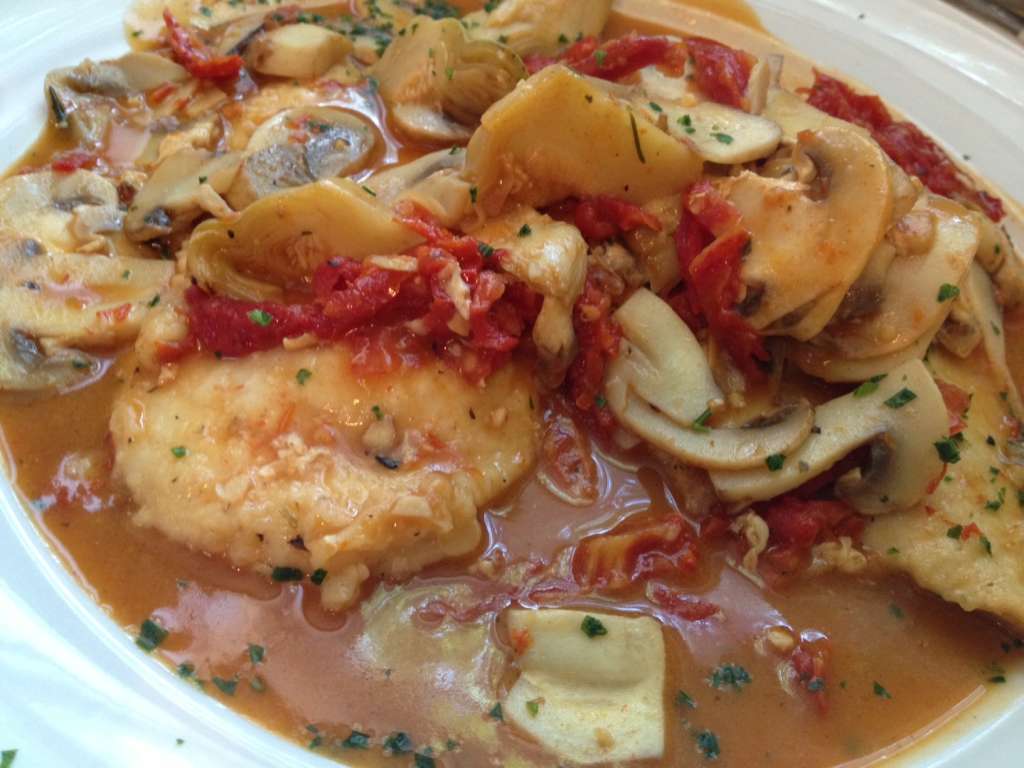 Sweetie’s Chicken Garden Fresco was almost as generous, served as above with a side of pasta in marinara sauce (I ended up having the leftovers for lunch the next day.) He liked it quite a bit; I thought it was ok but the taste of the (obviously) canned artichoke hearts was a little overpowering to the other flavors. That said the chicken itself was nice and tender, not overcooked and dry as can often be the case. 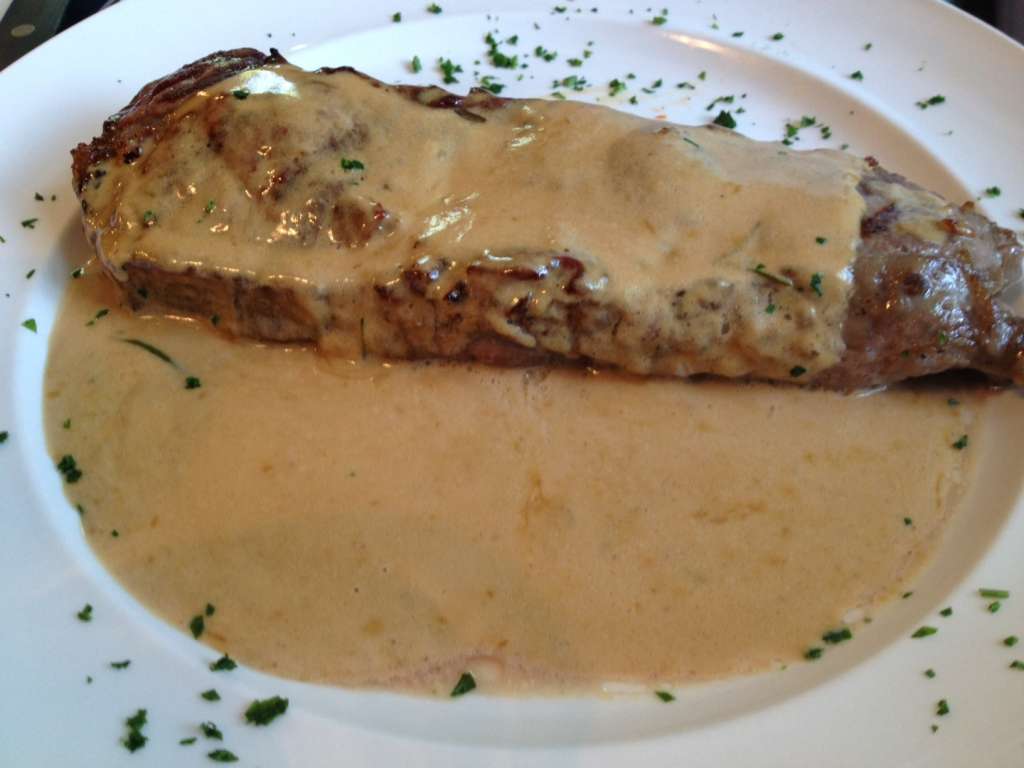 R also liked his steak—there wasn’t a piece left on the plate when he was done except for a few bits of fat and gristle. 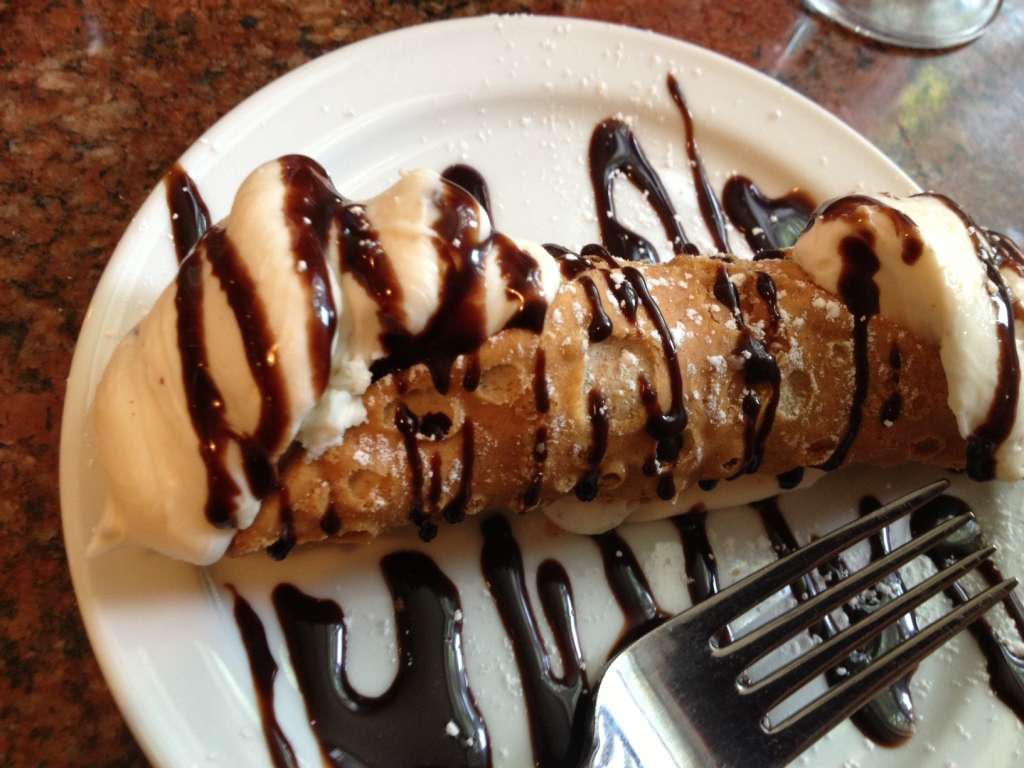 I truly didn’t have room for dessert, but sweetie could not resist getting a housemade cannoli to share for the table. We also finished up with some very good coffee and espresso.

All in all I was impressed with our meal, given I had no real expectations for what it would be like. The entree offerings are certainly better than what you’ll get in other nearby Italian-American family restaurants and diners, the calamari was terrific, the prices reasonable and the service really excellent. Being BYOB like everywhere else in Mullica Hill is also a bonus in my mind: we enjoyed our meal with a great inexpensive bottle of Aglianico wine from Campania, which was a perfect complement to the food. Gourmet Italian? Maybe not. But overall fresh tasting and the kind of homey meals that will definitely satisfy a craving for comfort food. We’ll definitely be going back…and next time for sure I’m trying the pizza!

One Response to First taste: Naples of Mullica Hill