Back to Tavro 13 in Swedesboro for a birthday feast

It’s been a while since I’ve been back to Tavro 13, a restaurant I had enjoyed greatly in the past when I visited several times in 2013, not long after their initial opening. We just don’t eat out a lot locally (I’m more of a home cooking enthusiast except when I’m on the road), which is why it’s been so long since we’ve been back.

In the time since then, Tavro 13 has gone through a slight metamorphosis; the bar area and connected room has been transformed into The Red Hen, a more casual eatery but still maintaining an emphasis on local and seasonal ingredients, just like their “sister” restaurant which is still in operation in the more formal dining room. As when Tavro 13 first opened, I’ve noticed in online reviews elsewhere that The Red Hen has been facing a lot of negativity and resistance from local diners. But their dining room was quite busy when we were there recently and I’m looking forward to giving it a try soon.

But a few weeks ago it was my birthday so I still wanted to enjoy a more upscale, celebratory meal in style—Tavro 13 it would be. I had made a 5pm reservation for myself, my partner D. and his father R. R had never been to Tavro 13 before and I was hopeful he would enjoy it as much as D and I have in the past, although I suspected it might be a bit of a challenge as he’s not as adventurous a diner as we are!

We had the dining room all to ourselves when we arrived just at the start of dinner service, which was perfectly fine. We started with a round of Tavro 13’s always excellent cocktails, including an Old Fashioned for me and a specialty of the house called “The Bull’s Horns” for D. I can’t recall what was in it but it was quite tasty—and definitely packed a punch! R enjoyed his Amaretto Sour although he was disappointed it was missing a traditional cherry garnish.

R’s first comment on the menu was how limited it was. I think that can definitely be a surprise to many used to the expansive diner and Italian restaurant menus in the area. But among the entrees there were at least two more traditional choices he was debating between, the crab cakes or the filet mignon. I had a hard time choosing between the duck and the “veal porterhouse”, but duck is something I only ever get in restaurants as D won’t eat it at home (he finds ducks far too cute to consume.)

The appetizers were difficult to choose between as even with a limited selection there were several that just sounded so tempting. R ended up going for the spaghetti with anchovy and breadcrumb sauce, a very classic Italian recipe you rarely actually see on restaurant menus. D went for a seasonal special of ramps with asparagus, poached egg and ham. I decided to try their house charcuterie plate, something I always like to try in a restaurant that cures its own meats. We also ordered a bottle of Bogle Essential Red for the table, which I thought would be a good choice for the variety of dishes we had coming. 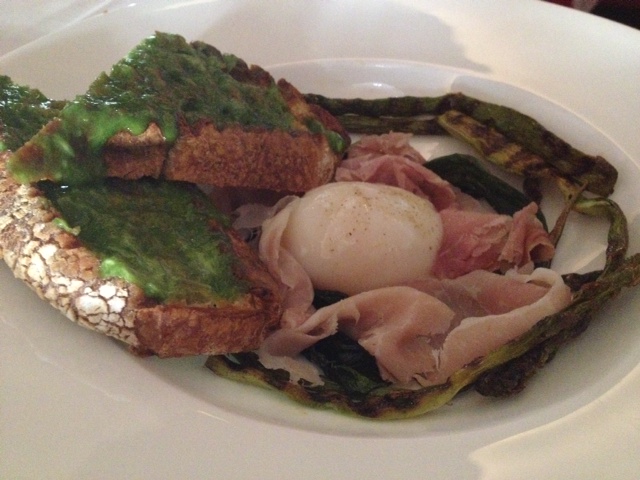 I was having some camera troubles at the time, so I didn’t get a picture of my beautiful charcuterie plate that included country pate, duck breast, coppa and speck—which was as delicious as it looked. Garnished with some curried/pickled vegetables and served with an ample basket of crusty thin-sliced baguette, it was a lovely start to the meal and enough to share a few tastes around the table. I didn’t get to taste R’s pasta but there was not a crumb left in his dish when he was finished with it, and I enjoyed my taste of the very rustic ramps plate.

But the real stars of the meal would be our entrees. 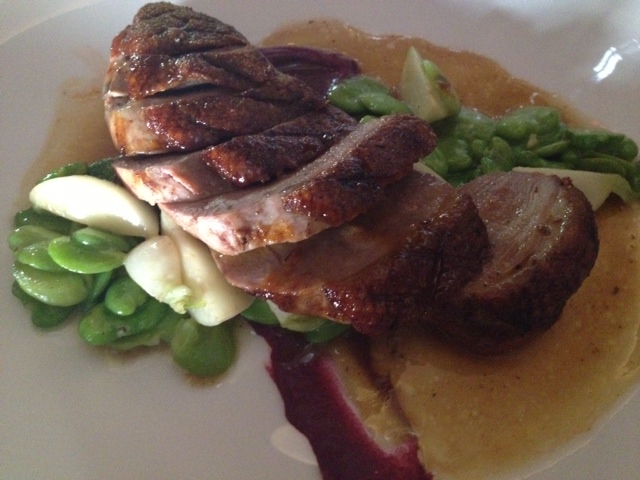 Duck with fava beans and turnips. 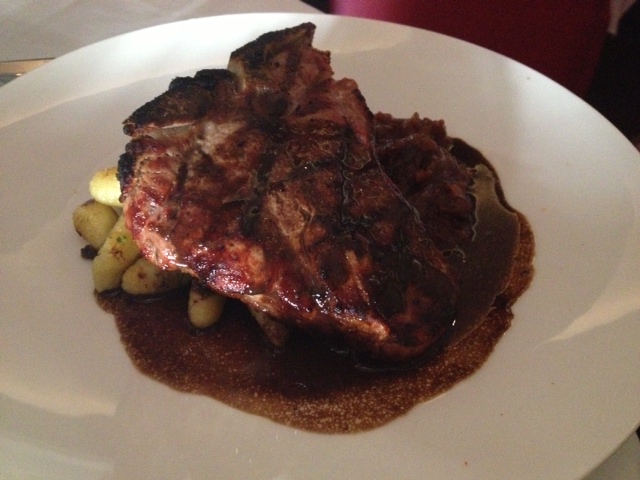 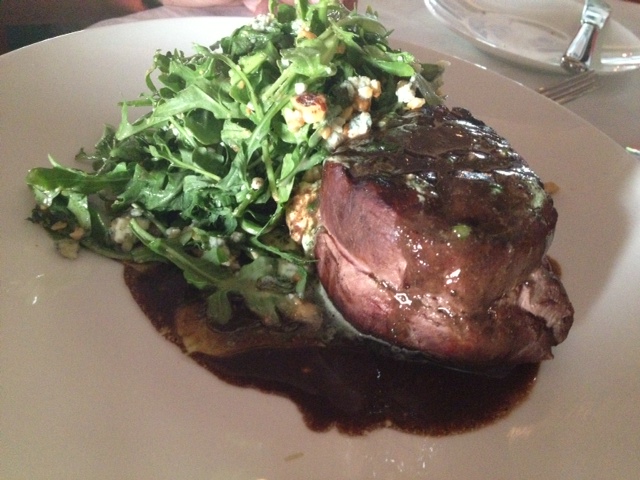 As  you can see, all of our portions were quite generous—and the proteins were perfectly cooked. I loved the duck with was well paired with early spring vegetables (fava beans are some of my favorites when in season). D’s porterhouse was terrific, although I thought the gnocchi’s flavor was a bit subtle and perhaps overwhelmed by the rich sauce for the veal. Perhaps the best was R’s filet and the excellent arugula salad, topped with blue cheese and walnuts. It was elegant and exceptional—better than the filet I’ve had at many high end steakhouses.

We were quite full by then but couldn’t pass up getting dessert since it was a celebratory meal. What I didn’t expect was the special plating my chocolate cake with peanut butter ganache would receive! It was decadently rich—so rich I could not even quite finish my small portion—but just perfect for a birthday treat. 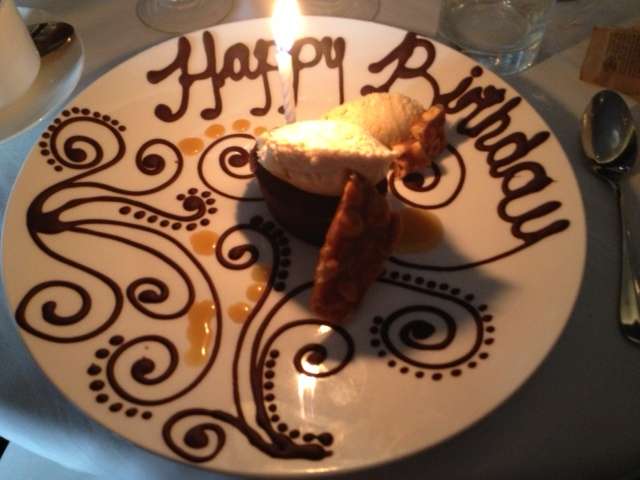 All in all it was a great meal. We left stuffed and happy—everyone had enjoyed their food and it was the perfect birthday dinner. I remain so happy to have a place as good as Tavros 13 in the area, and I’m really looking forward to checking out The Red Hen soon!