Well, it was finally time to get ready to say goodbye not just to Salerno but to Italy: our last full day before flying home had arrived. And after over two weeks of amazing adventures (and food), we were quite honestly getting ready to go home. Exhaustion and a blasted stomach virus we seemed to be passing back and forth had us both worn down and ready to catch up on some needed rest in our own bed in New Jersey.

We spent the morning packing up at our B&B and then just taking a leisurely walk around Salerno for a few hours. The sunshine had returned after the on-and-off rain of the past few days, and we found ourselves in a part of town we hadn’t explored before, full of medieval winding roads and long-abandoned churches. 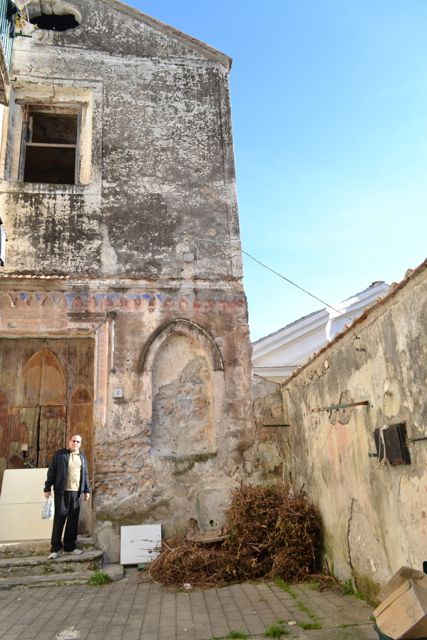 We managed to get in one more attraction in the city that morning, the unique Museo Roberto Papi. Opened just in 2009, this museum continues Salerno’s importance in Western medical history, as it houses a large collection of medical instruments and supplies dating from the 17th century through World War II. 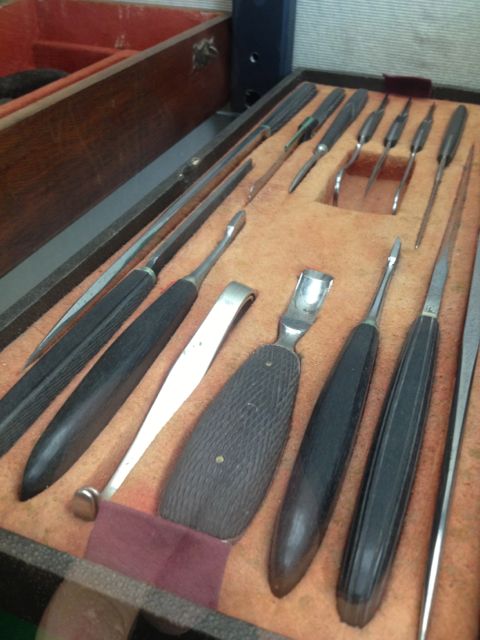 Dave specifically wanted a photo of this set of tools. I have no idea why. It must be a doctor-thing.

Now, case upon case of dental, gynecological and field surgery tools might not be to everyone’s interest (or stomach), but for a doctor like my sweetie it was right up his alley. Well, except for the historic dental office. 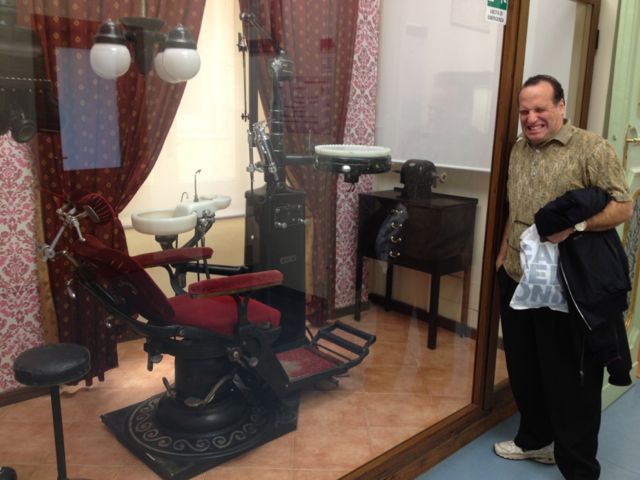 It was a shame we did not have the time after that to visit the nearby Medieval Medical Herbs’ Garden, but then again that leaves us something else to see when we return to Salerno—and I have every belief that we will, given how much we really came to love the city and its people. Francesco and his family saw us off to the train station, with several gifts from his mother Lena to take home with us including her homemade limoncello!

We were on the train back to Rome just a little after 1pm, where we made a lunch of the buffalo mozzarella we’d purchased at the farm near Paestum two days before and some hard rolls saved from the breakfast. (If anything, the mozzarella tasted even better now after a few days aging out on our balcony!) We arrived in Rome a little after 3pm, at the Tiburtina station outside of the city center. From there we got a cab to take us to our final place of lodging, the Hotel Seccy in Fiumicino. It was a nice cab ride that took us past some of the sites of Rome we’d seen just about two weeks ago, giving us a chance to say a final goodbye to them.

I’d chosen Hotel Seccy after looking into lodgings near Fiumicino airport that weren’t necessarily “airport hotels”. Seccy had very positive reviews on TripAdvisor, mentioning its location in the small fishing-oriented town outside of Rome. Indeed, the hotel was quite attractive and new in appearance, seemingly a bit out of place in the middle of a small residential area. But the staff were all exceedingly friendly and provided us with a map of the area with restaurants and other amenities indicated, booked us a taxi to the airport the next morning, and made sure to arrange wake-up call as well before we’d even checked into our room.

We didn’t do any exploring about until later that evening, however, taking instead a few hours to rest and relax in our room. We did venture out a little after 6pm to head to the canal and port of Fiumicino, which is just a seemingly endless line of seafood stores and restaurants stretching all the way out to the water. Many were closed for the winter season, but we looked over the menus at the places that did appear to be open, trying to decide which one to try for our final meal in Italy. It was not an easy decision as many looked tempting, and scanning reviews quickly on my phone via FourSquare and TripAdvisor wasn’t pulling up any consensus on which ones were the best.

Eventually ended up deciding on L’antico Molo, based on both its posted menu and attractive-looking interior of dark wood, warm yellow walls, and elegant-looking table settings.  We were asked if we wanted to sit in the front room or the back room, and in retrospect perhaps the front room would have been nicer? I thought the back room would be more “romantic” and cozy, but it ended up feeling a little…enclosed and dated to me. Not quite as attractive as the front. 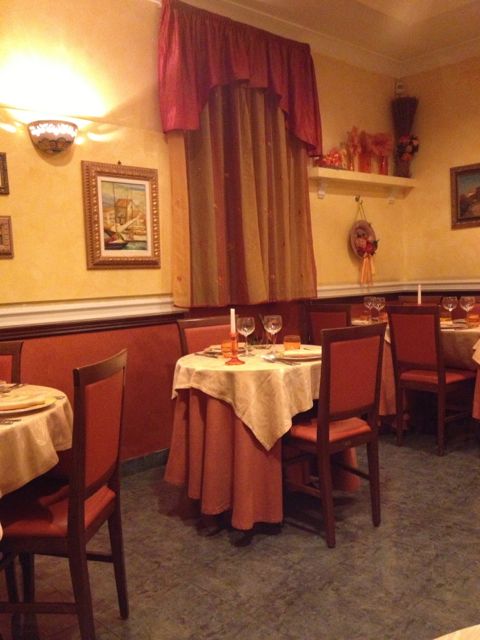 We debated what to order for a while, as I was hungrier than sweetie (whose stomach was still acting up a bit.) We ended up ordering a shared antipasti, a pasta and a risotto, and two secondi—or so I thought. More on that in a moment. 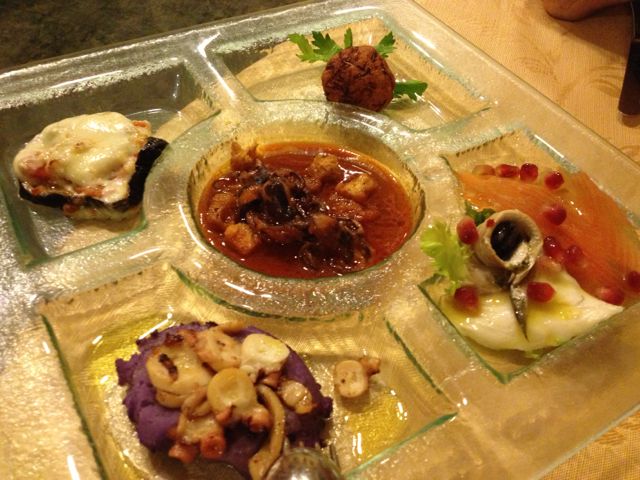 The mixed antipasti was lovely and delicious. Primarily fish based, it featured marinated filets with pomegranate seeds, squid in a rustic tomato sauce, conch over purple potatoes, and other delicious bites. This was really nice and definitely got me excited for what was to come. 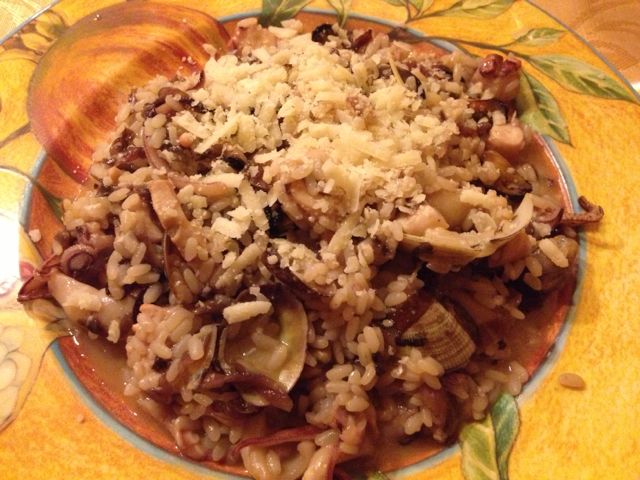 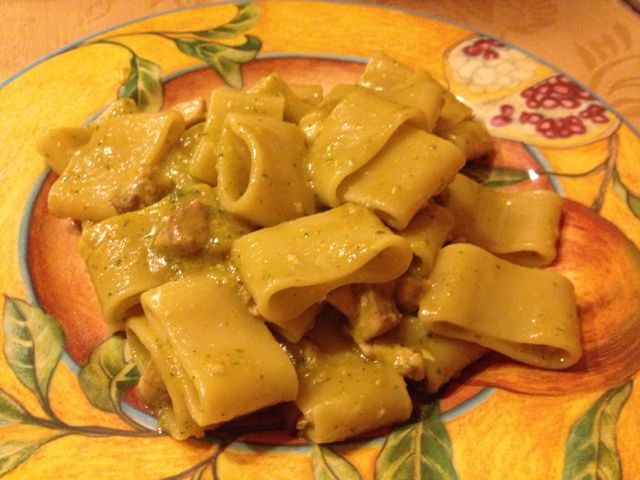 Next came our primi plates. I hadn’t had risotto this entire trip so I  just had to go for the risotto with mixed shellfish. This had a really robust flavor and was quite filling—so much so that I made a point not to finish it since I’d ordered a mixed fried fish plate for my secondi and I wanted to have room for it. Sweetie ordered an unusual pasta dish in “Sicilian sauce”, made with pistachio cream. This was unique and really tasty, and just right for a sensitive stomach in need of something gentle.

There seemed to be a considerable wait before our secondi came out; as mentioned I had ordered the Fritto Misto di Mare (mixed fried fish), something I’d been craving all trip (I usually over-indulge on it in Venice but was trying to be “good” and go light on fried food this time.) Sweetie had ordered the grilled shrimp. Well, he got his shrimp and I got…

…a giant plate of french fries?!

I stared at it for a moment, wondering if this was some weird side dish meant to go with my fried fish. But our waiter had run off as soon as he’d put down our plates, not even giving me a chance to mention this was not what I’d ordered.  I had absolutely no interest in a plate of American-style fried potatoes, so I got up and went around to the front of the restaurant, waiting until our waiter came out of the kitchen so I could flag him over and explain this was not what I’d ordered (I’d in fact specifically pointed at the Fritto Misto di Mare on the secondi page of the menu while ordering it, not anything on the separate contorni list.)

At this point although I was disappointed, I didn’t want to wait around for the correct order to be made and just asked for a spare plate to share sweetie’s shrimp after the fries were whisked away. And the shrimp were quite good, but my appetite was now soured and I was feeling cranky after not getting what I’d been craving and looking forward to. (I didn’t even feel like taking a photo of the shrimp!)

We did order a dessert to share, and also one grappa and two espressos. After coming back from a bathroom break I saw our waiter had messed up our order again, bringing out instead ONE espresso and TWO grappas, which sweetie had pointed out was incorrect. Hmm. Curious too that when the bill came out, they took off french fries (4 Euros) but not the second grappa (which was 6 Euros). An oversight, or some attempt to make back the lost money by trying to pull a fast one on some American tourists? I’m not sure.

All told, it was kind of a shame—what had started off as a promising, very good meal ended up getting largely soured (for me at least) by the service errors and problems, as well as an overall feeling that they didn’t really care about us as “passing tourists” compared to the locals dining the other tables. Oh well, not every meal in Italy is going to end up being perfect…but I’d hoped for a better final note for our trip.

But that, at least, at last, is the end of this trip report which has taken me over a month to finish writing up! If you’ve actually read it all through from day one, my hat’s off to you and thanks for sticking with me. Hopefully maybe I’ve shared some helpful tips and recommendations if you should ever be traveling through Rome, Naples or the Amalfi Coast in the future.

Now, time to start planning for our next vacation….!