I was still feeling a little under the weather when we got up this morning, but there would be no lying around in bed today. We had a busy schedule ahead of us: a tour by car south of Salerno to Paestum, with a stop at a buffalo mozzarella farm along the way. And that was just for the morning and early afternoon; in the evening we would be joining our hosts at Salerno Centro for dinner at Lena and Pasquale’s house and a lesson in pasta-making.

I kept breakfast light, which was a good thing as I was fighting a touch of car sickness on the winding ride out of Salerno. Pasquale was our driver, with Kaoru joining us to translate. It was still drizzling rain when we arrived at Tenuta Vannulo, the farm where we’d be taking our tour. 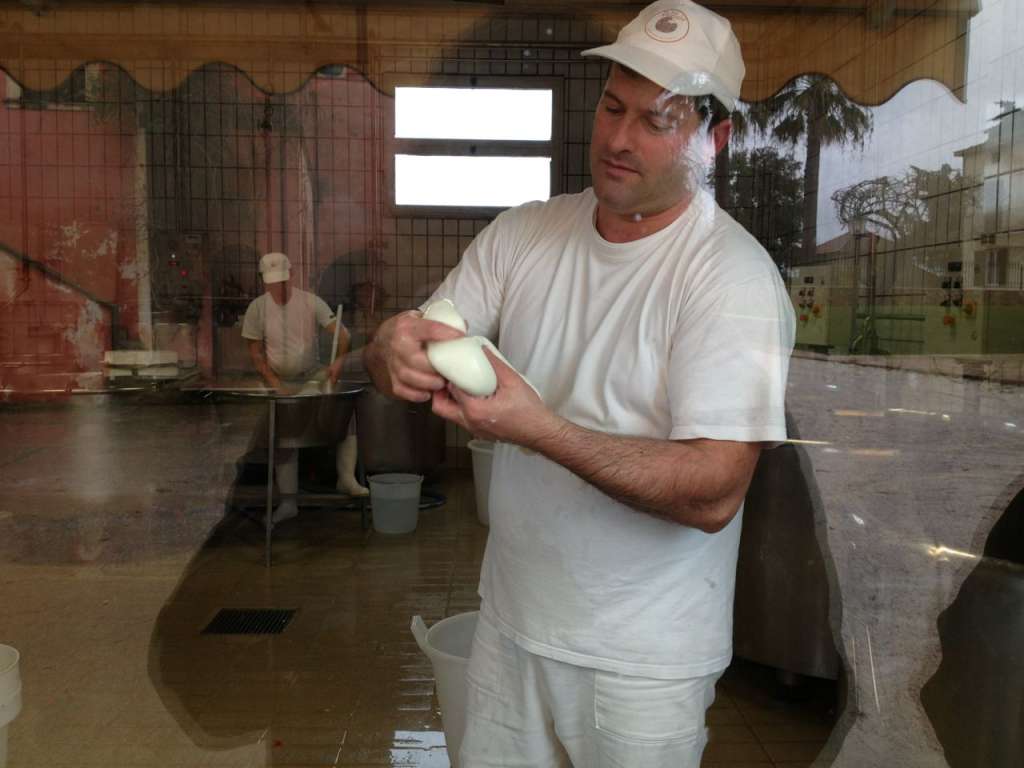 The cheese factory at Tenuta Vannulo

The entire region of Campania south of Salerno is dominated by buffalo mozzarella cheese making, but Tenuta Vannulo is a special operation. On over 200 hectares of land, this family-owned business produces strictly organic products from the water buffalo born and raised there (the buffalo population is about 600 on the farm). Cheese, yogurt and gelato are all made from their milk products on the premises, as well as hand-crafted leather goods. Only a very limited amount of cheese is produced every day, and none is sold to restaurants or institutions. Only individual customers can purchase their mozzarella and it is generally reserved in advance, it is under such high demand! 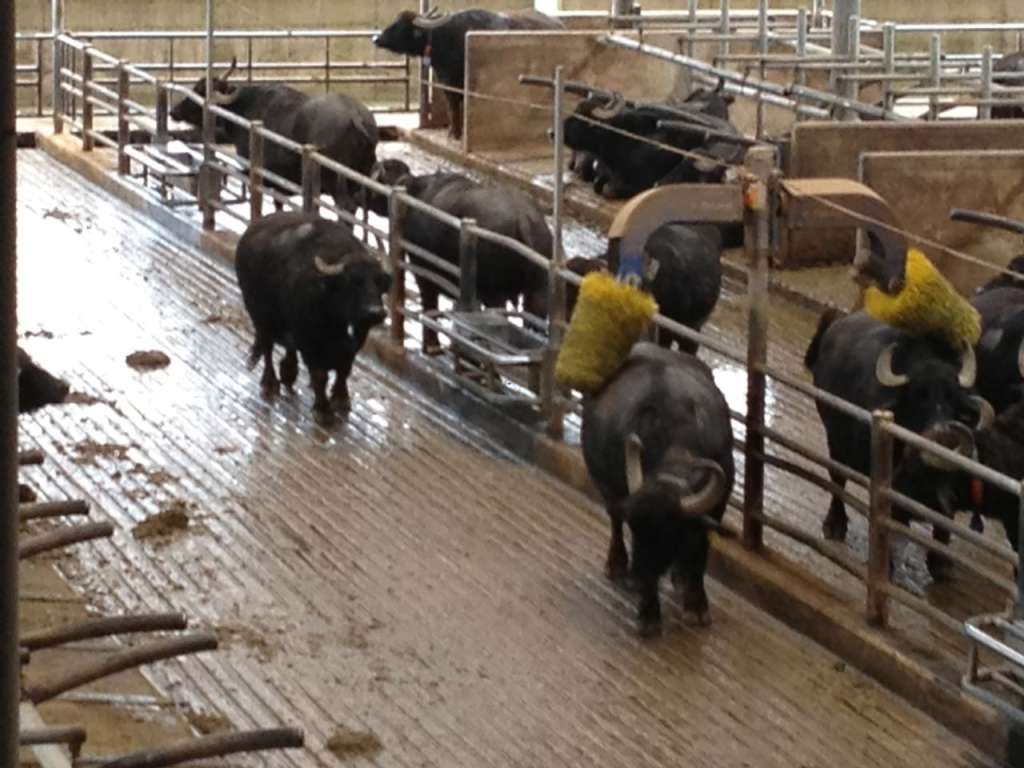 Water buffalo in the barn, taking turns at their massage stations.

Visitors are able to watch the cheese factory in operation as well as tour their beautifully clean, state-of-the-art barns for the buffalo. Indeed, the animals seemed very content and happy; they have lovely fresh air flowing through their open barn, “massage” machines they can walk up to to rub their backs and heads, and laser-guided milking stations that the buffalo can walk up to to “take care of business” on their own! It’s an incredible operation and one I really enjoyed getting the chance to see, given my own family’s history and experience raising cattle, pigs and poultry. Before we left we sampled some ice cream and bought some mozzarella for the road. (Point of interest: buffalo mozzarella is best kept at cool but NOT refrigerator temperatures! It can stay good for up to 5 days at cool room temperature and kept in its liquid—and in fact I thought ours tasted better after having a few days to age…) 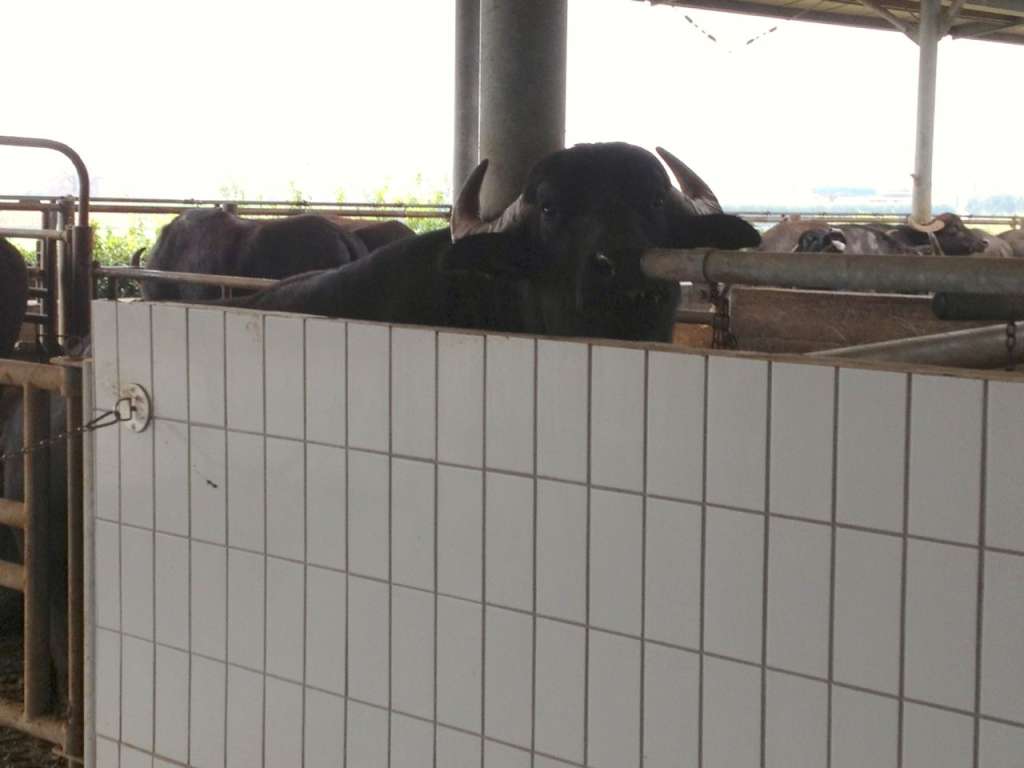 From there is was only a short drive on to Paestum, a place I had been very eager to see since we began planning our trip. In the archeological park of Paestum are the ruins of three magnificent Greek temples, considered the best preserved in all of mainland Italy.The first temple could be easily seen as we were dropped off by Pasquale and Kaoru by the main entrance gate. But before exploring the park, we spent about an hour in the neighboring museum which provides a wonderful introduction to the history of the region and the archeological finds that go back to even prehistoric times. 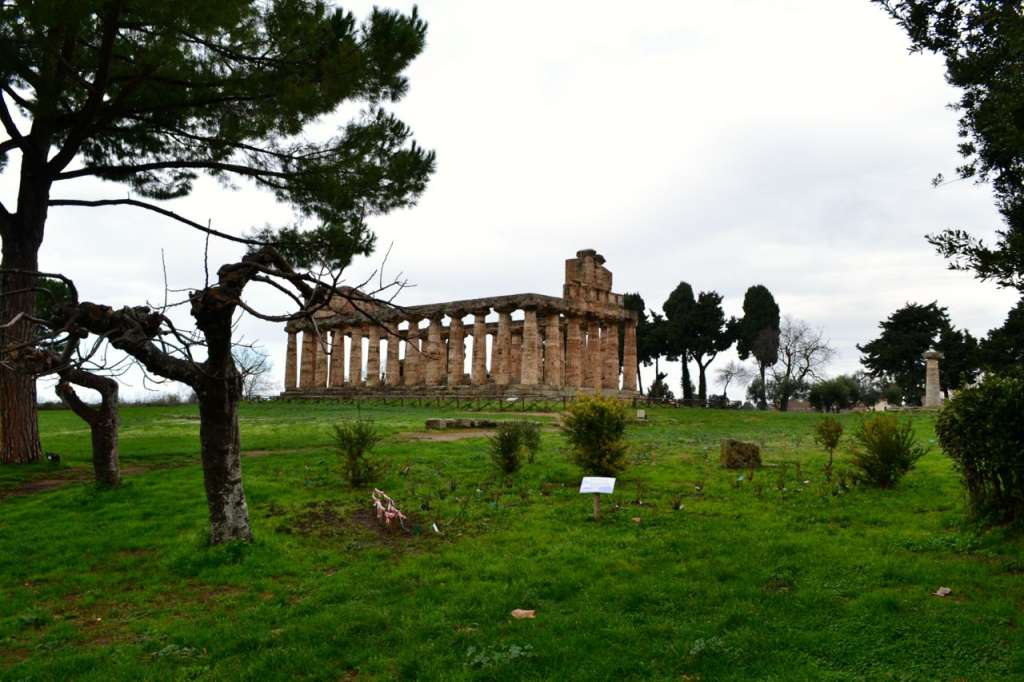 The Temple of Athena in Paestum.

The rain was just beginning to finish as we entered the park, making for perfect timing. Stretching between the three temples are the ruins of a Roman town as well, which made for interesting comparison after our recent visits to Pompeii and Herculaneum. 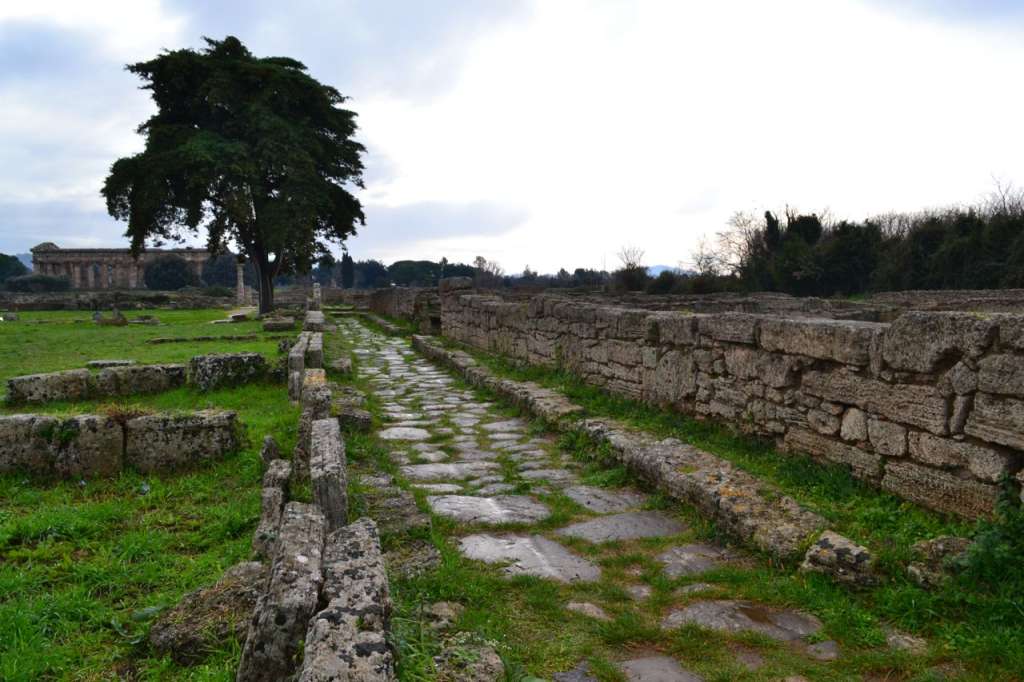 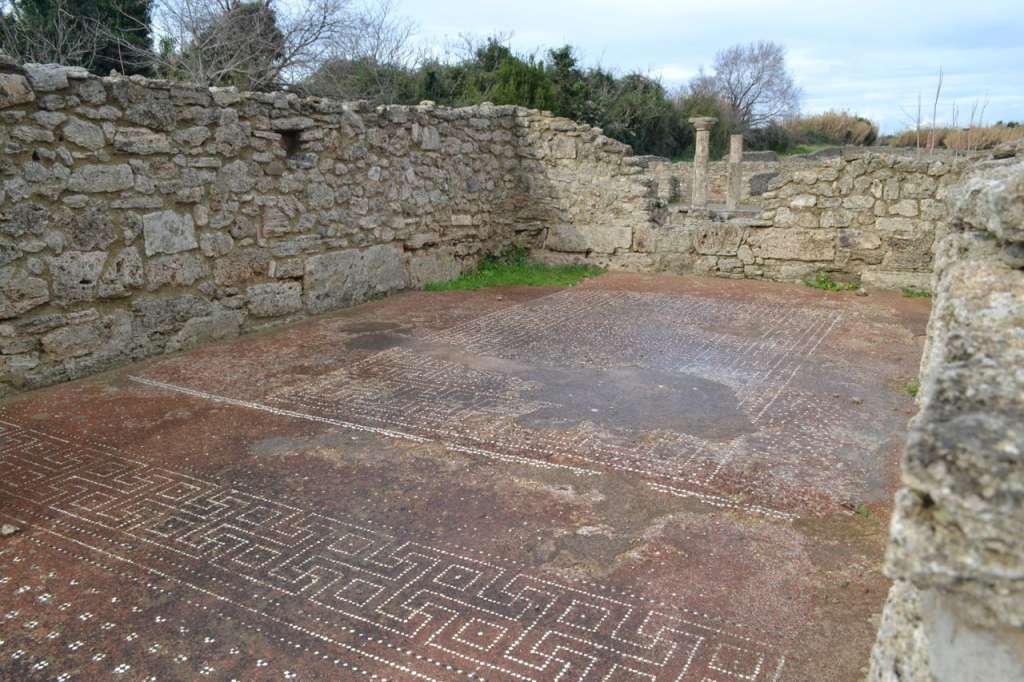 A tiled floor in what was once a Roman house.

But the temples were definitely the main attraction and it’s impossible to describe how breathtaking they are, unless you’ve been there to see them with your own eyes. Standing before them, you feel like an insignificant ant, yet also marvel at the ingenuity and skills of the ancient Greeks that they could construct such buildings without the aid of modern technology. Has humanity actually gotten “dumber” than our ancient ancestors once were? Sometimes you have to wonder… 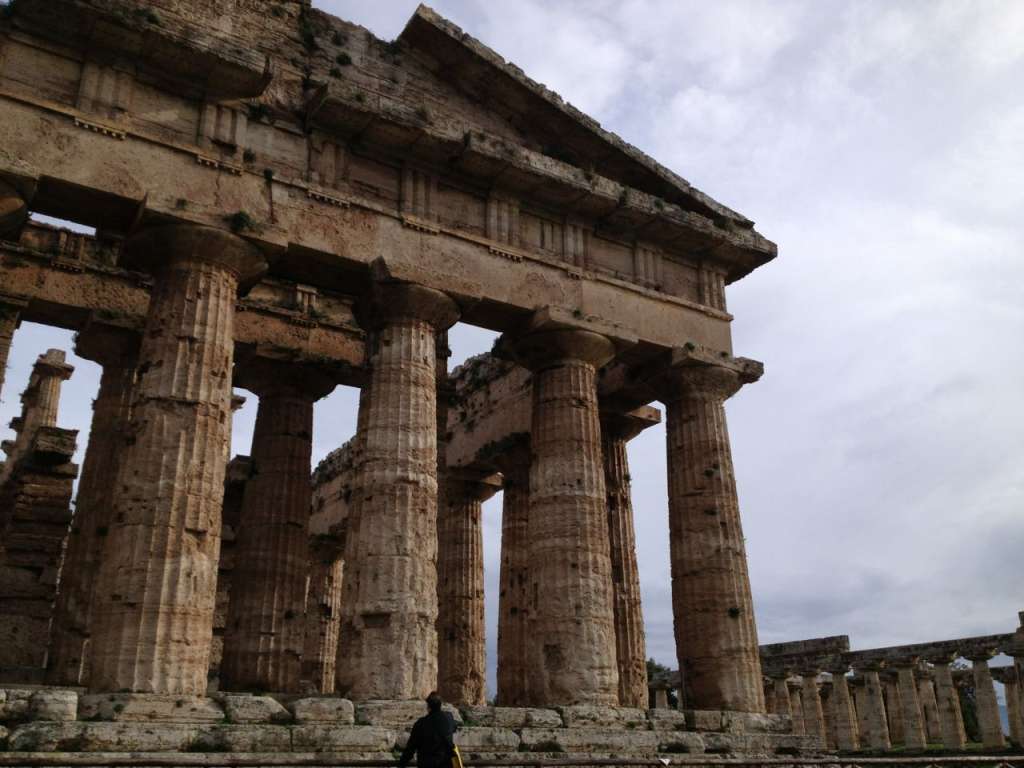 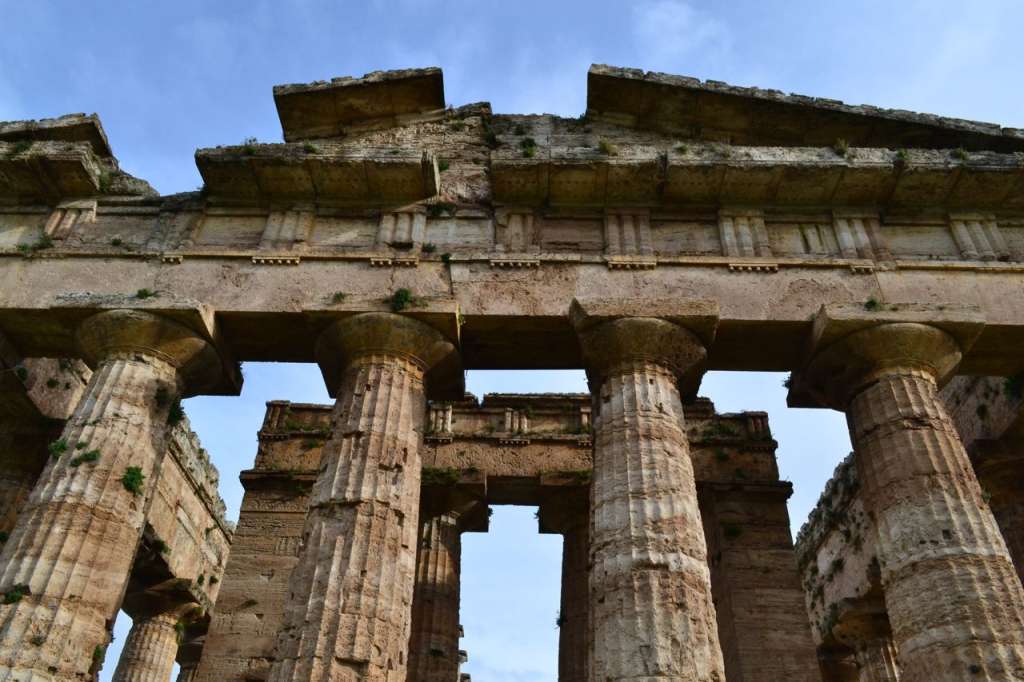 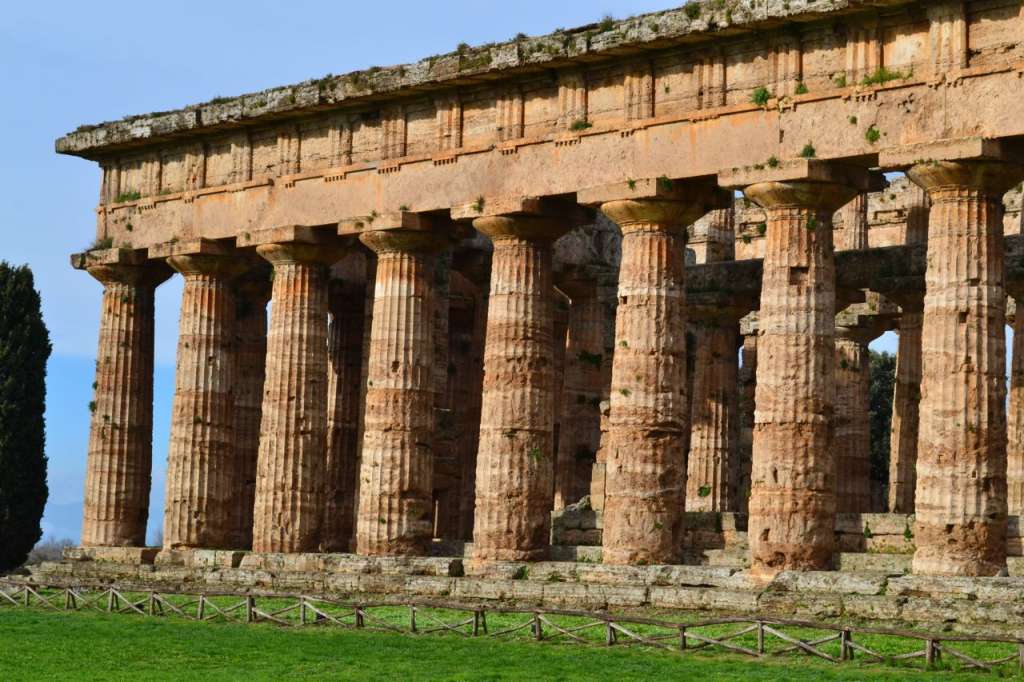 By the time we’d made it to the two grand temples of Hera, the storm clouds had passed and we were treated to magnificent sunlight and views of the ruins. It was also a wonderful day to tour the sight as there was hardly another soul in sight. The fresh air and surroundings seemed to do a lot to help clear my head (and queasy stomach) as well. 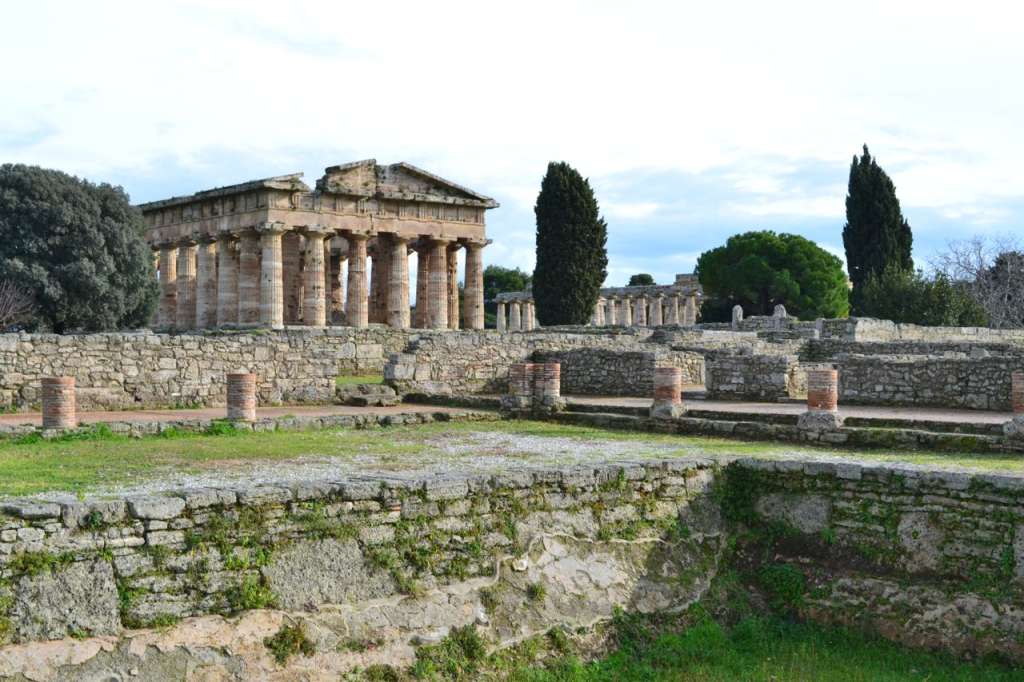 We finished at Paestum about 2:30 and headed from there back to Salerno. Francesco had suggested he would pick us up at about 6pm that evening so we’d have the chance to visit the new museum in Salerno focused on the World War II history of the region, Lo Sbarco e Salerno Capitale. My grandfather had always had a deep passion for WWII history—God knows we watched enough war movies when I was a kid—so I really wanted to see the museum knowing it was something he would have enjoyed. But first we’d have a few hours of rest back at the B&B. Sweetie slept while I snacked on the leftover half of my pizza from the night before…

Francesco picked us up on time and we took a quick car tour through the more modern part of Salerno, including past their football stadium. Finding the War Museum took a little effort—you have to enter through some forbidding gates and be directed to the correct rooms inside some kind of office building. But once we found our way there, it turned out to be an absolutely fascinating experience! The museum is still building its collection (as well as hoping to add more English-language descriptions of the artifacts, news clippings and memorabilia on display.) We began our visit with a video introduction to Operation Avalanche and the Allied Invasion of Italy. After that, we were shown around the exhibit space which includes wonderful artifacts collected by local residents as well as donated by soldiers who served in the area and their families. Most surprising to us were photographs and news clippings showing American troops in and around the temple ruins of Paestum, where we had just been that day! 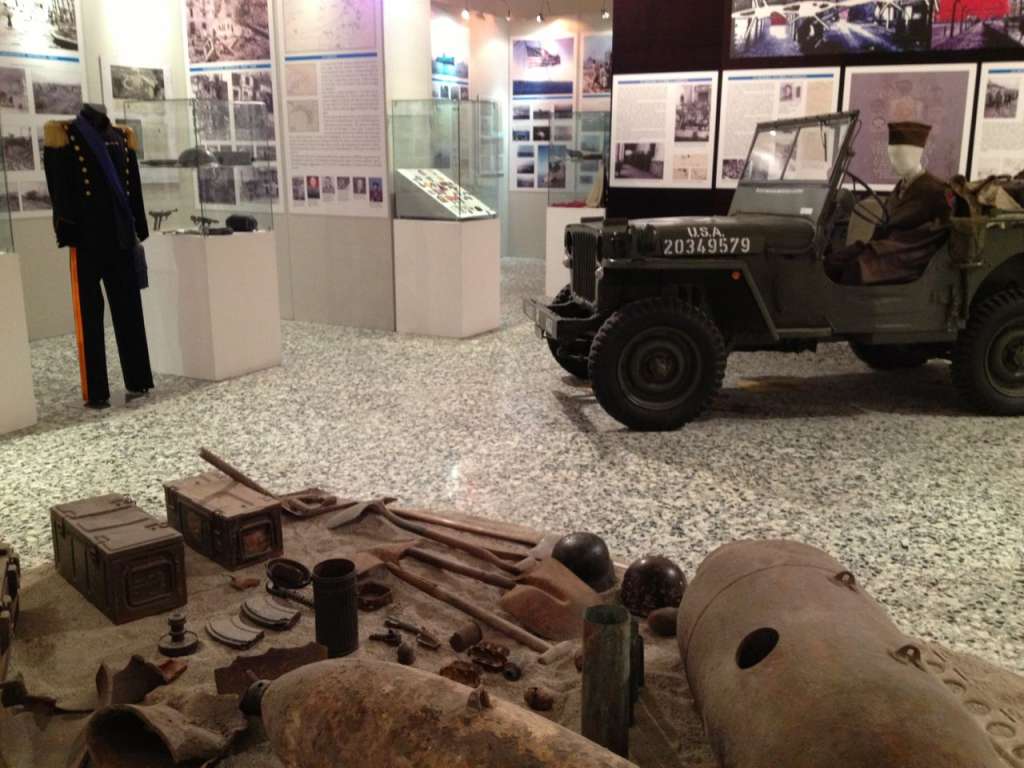 Inside the Museum of Landing and Salerno Capitale.

Outside the museum there is also an especially haunting display, including a German train car used to transport Jewish people to concentration camps. We were so glad we had taken the time to see this wonderful museum and I strongly encourage any visitor to the Salerno area to see it. So much of the time we look at the wonders of Italy today without really thinking of the price of war and the toll it took on so many.

We left the museum at just about 7pm and headed from there straight to our host’s apartment, in a residential area of Salerno. There we re-met Pasquale after our morning touring Paestum, his wonderful wife Lena and their absolutely adorable dog “Whiskey”. Lena greeted us with a round of martinis as we relaxed before the fireplace, but soon it was time for me to get to work in the kitchen! Or at least, to observe and watch Lena at work preparing three different types of pasta: tagliatelle, ravioli and gnocchi. 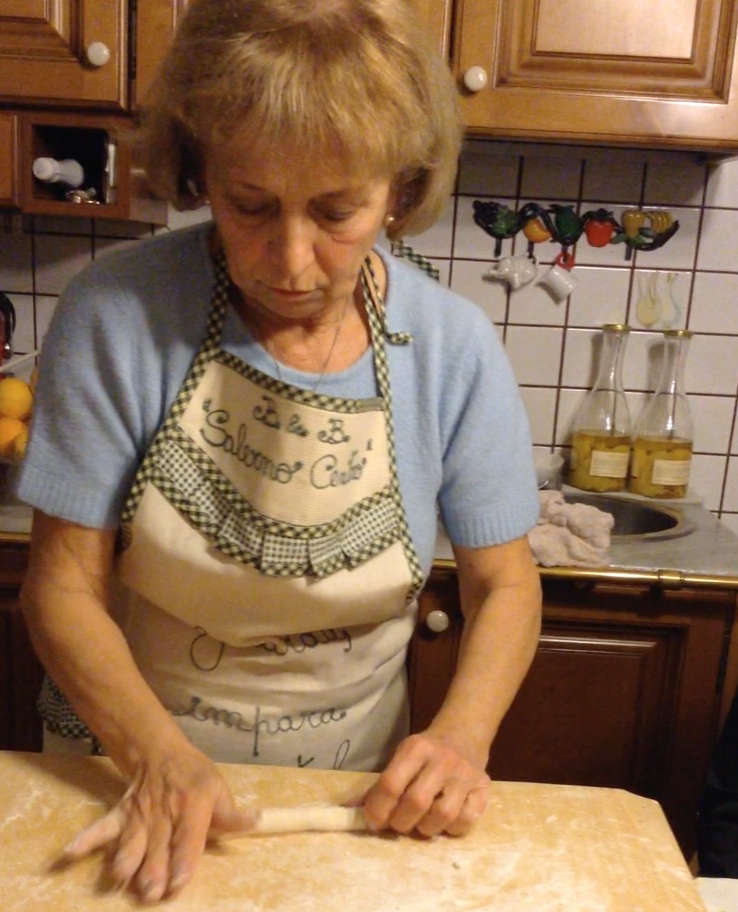 Watching the master at work.

Lena’s family had owned a restaurant in Salerno and I was eager to learn what I could that evening. I have made basic pasta at home before, but I wanted to see how a “real Italian” would prepare it at home. Francesco provided translation as I watched Lena work, mixing the flour and eggs  by fork and by hand into a golden dough. I noticed she used the same Atlas pasta machine as I have for then flattening the pasta dough into sheets, although she had the motorized attachment to save time (and arm power)! I think I need to invest in one now myself… 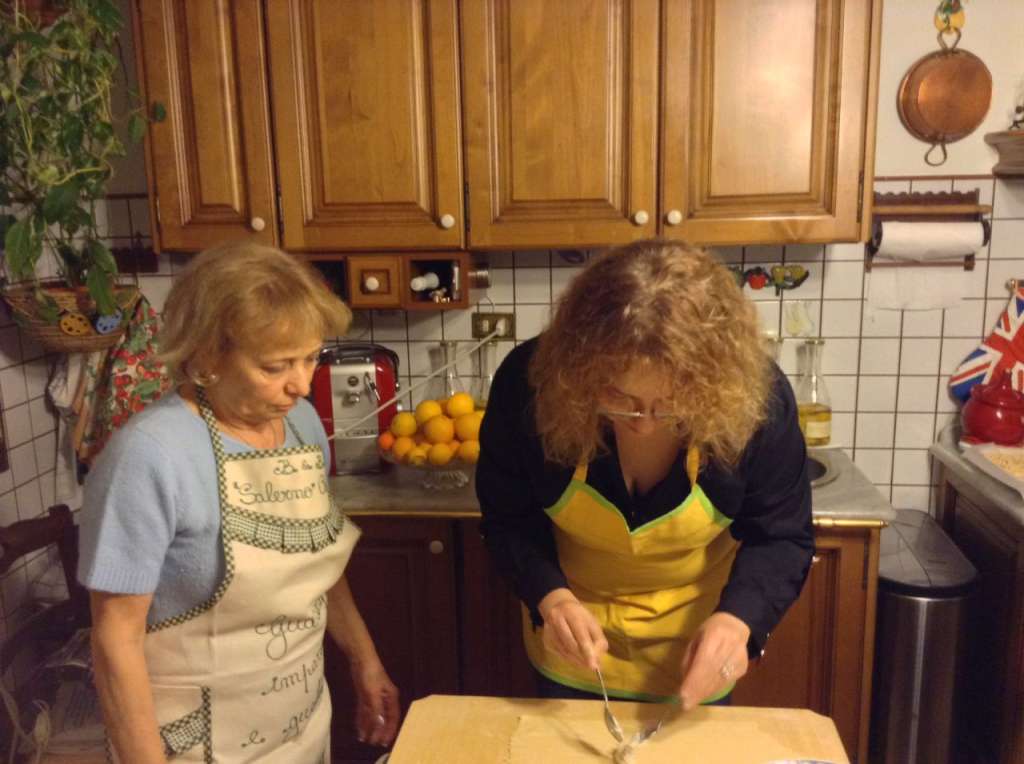 Trying my first ravioli under a very watchful eye…

Although I have made flat noodles like linguine before, making stuffed ravioli was a new adventure for me. Now I have infinitely more respect for how difficult it is! It seems so simple and yet it’s not; the trick is making sure you don’t end up with air pockets when folding over the pasta sheets and really securing the edges properly. It’s not nearly as easy as it looks.

Gnocchi, too, was more difficult than it appeared. Mixing the dough was one thing, but getting just the right “flick” of the finger to give the little potato-flour balls their proper texture and shape. I just couldn’t get a handle on it for a while yet sweetie seemed to figure it out like a charm when he gave it a try! 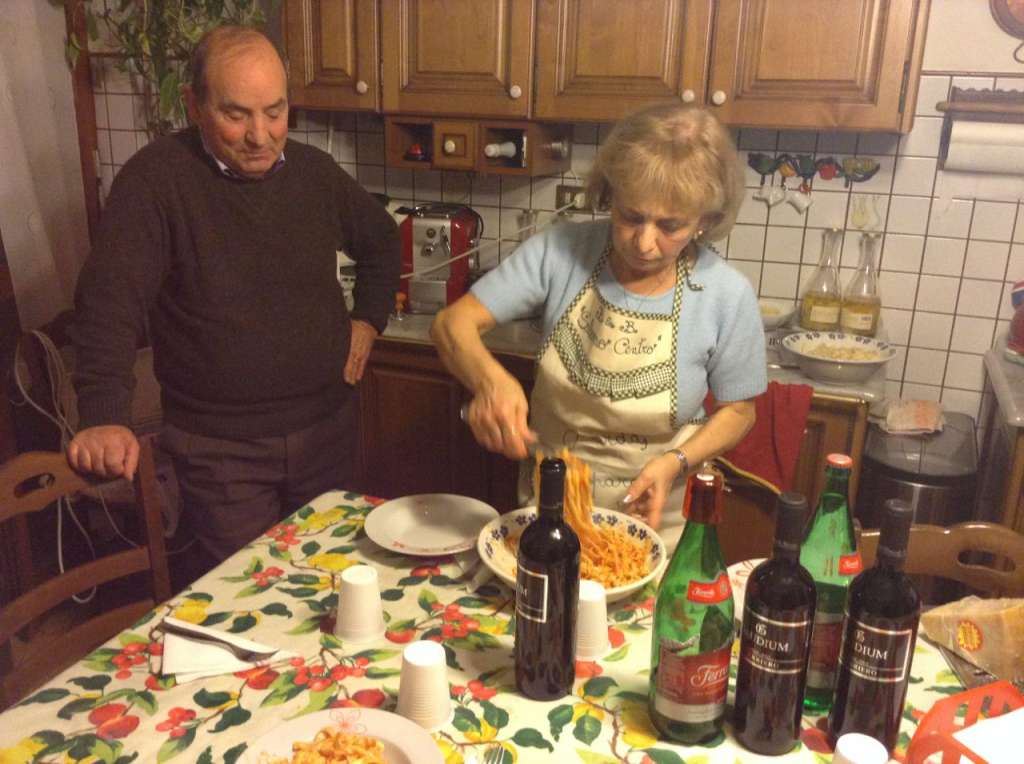 Pasquale inspects the first course of tagliatelle and everyone is eager to taste! 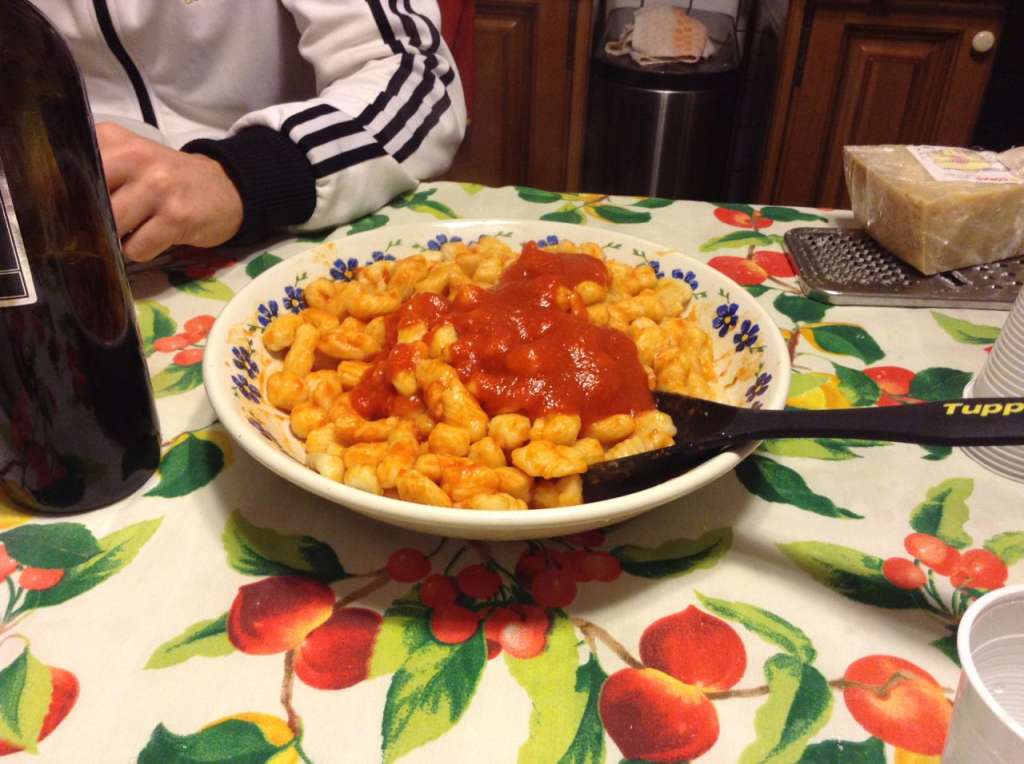 The gnocchi I struggled so much to (help) make! It was delicious, the best I’ve ever tasted. 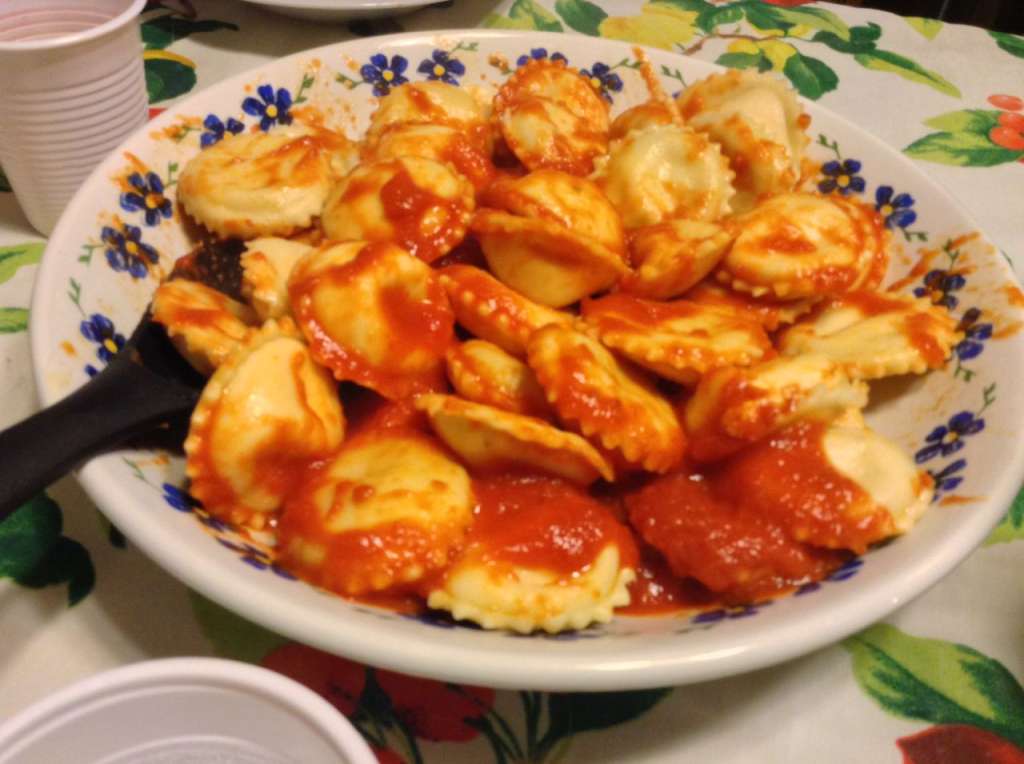 Final course: ravioli made with buffalo ricotta from Tenuta Vannulo purchased that morning.

Yes, three courses of pasta was probably more than anyone really needed…but how can you not enjoy it all when freshly made and prepared with such skill and love? After such a feast only the lightest “dessert” was in order: some fresh-roasted hazelnuts, tiny super-sweet local oranges, espresso, and of course some of Lena’s homemade limoncello and other digestivos. Aah. What a day. What a place Salerno is turning out to be. Do we really have to go home soon?

This entry was posted in Uncategorized and tagged italy 2014, mozzarella, paestum, pasta, salerno. Bookmark the permalink.