Unfortunately I did not have a good night’s sleep on my first night in Salerno. It wasn’t the fault of our comfortable room and bed at Salerno Centro, but seemed to be a double-whammy of having an unexpected garlic intolerance attack after last night’s dinner (most likely because of the steak) and a stomach virus, given the sweetie would come down with the same symptoms of a few days later. Needless to say, I didn’t wake up feeling my best and it was an effort to eat any of the lovely breakfast waiting for us. A little yogurt and homemade coffee cake did settle the stomach a little bit, but that was all I could manage.

It also looked to be a very wet and overcast day with rain expected to fall all day. Therefore we planned to take it easy and rest up before the last few activity-filled days of our trip when the weather was expected to be better. Two weeks spent in Italy can be wonderful, but we were running ourselves a bit ragged trying to see and do everything possible.

So, we spent the early part of the day seeing a few “indoor” sights in the city, the first being the “Virtual Museum” of the Medical School of Salerno. We had been unaware before our arrival that Salerno was actually the site of the very first medical school in the entire world! The “virtual museum” is not much more than several interactive video displays telling the history of the medical school and illustrating medical practices and knowledge of the time; even so, it was an enjoyable presentation and a fine way to spend about an hour’s time. Given sweetie is a physician he especially enjoyed the presentation, although I also was interested in how historically there were women physicians dedicated to common issues of female health, much like modern day midwives. 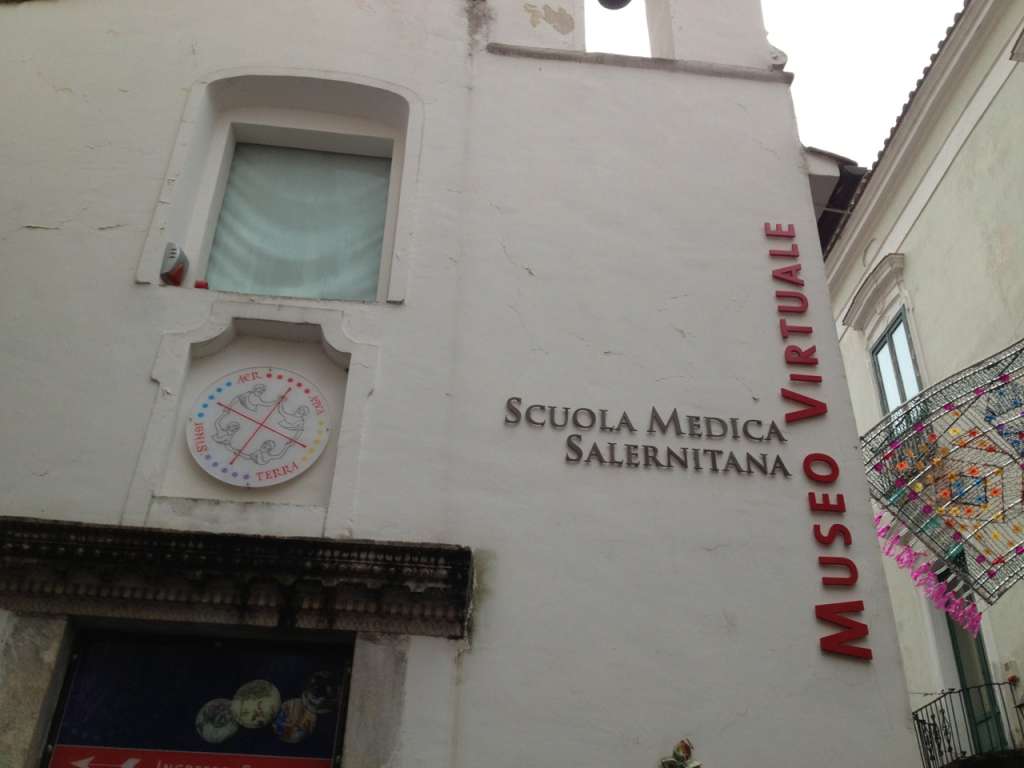 The “Virtual” Museum of the Salerno Medical School.

From there, it was only a very short walk to the Pinacoteca Provinciale di Salerno, the small art museum of the city focusing on regional artists of the past and present. I wouldn’t call it an especially noteworthy collection, but there is no entrance fee and the works by Neapolitan Baroque followers were interesting to see after our week in Naples. There were also some fine more modern landscape and pastoral paintings to enjoy.

I was needing a sit more than anything to actually eat by this point (since it was past 1pm), and sweetie was getting hungry. So we dodged the rain and headed back toward our B&B and one of the restaurants near there which had been recommended to us, De Gustibus. This modern-style pizzeria is clearly popular with local students and business people, who filled the tables at lunchtime hour. Besides many pizza offerings their menu featured several pasta dishes, daily antipasti on display in their glass counter and large salads. I must have really looked completely out of it as our waiter quickly brought me an English-language menu as I was zoning out staring at the first Italian one I was given. No, I could understand it fine—I just didn’t know what I’d be able to keep down!

I ended up ordering their “De Gustibus” house salad of mixed greens, pears and cheese, as that sounded safe and light. Truthfully we hadn’t been eating enough veggies this trip and I was wondering if that was part of my problem. Sweetie ordered a pasta with baby clams and chickpeas which was really delicious, I only wish I’d had more appetite to enjoy it. As it was, I basically picked at my generous, fresh salad and struggled to finish one glass of wine—that’s definitely not normal for me! (I also was too out of it that lunch time to take photos, my apologies. But I will say everything was good, and De Gustibus is a fine choice for a light midday meal in Salerno.

By the time we were done with lunch the rain was really starting up again, so we ended up just calling the afternoon a wash-out and crashing in our room. I needed the nap since I hadn’t slept the night before, and it just didn’t seem worth fighting the weather outside. We finally decided around 7pm that we had to brave going out if we were going to get anything to eat for dinner. I still didn’t have that much of an appetite but I wasn’t going to spend an entire evening crashed out in our room!

My first inclination was to try for some light seafood, and we’d been told that the best places to go for that would be along the Lungomare. Just past the public gardens is a long stretch of restaurants, pizzerias, bars and cafes, which I’m sure are all overflowing with people in the summer months! But on this cold rainy night it was practically a ghost town, with outdoor patios covered over in plastic and perhaps only half of the establishments open at all. Of those that were open it was difficult to make a decision on where to dine, but I ended up choosing Ristorante Santa Lucia based on positive reviews I quickly pulled up on FourSquare and TripAdvisor.

We were welcomed in quickly to the nearly empty restaurant, which has an attractive front dining room (and I’m glad we were inside instead of out in the covered patio area! The menu offered a fairly standard range of regional offerings including pizzas, pastas and seafood. For some reason once I sat down, I no longer had a craving for fish despite my original thoughts; a simple pizza margherita (with buffalo mozzarella of course) sounded like the best option for my still unsettled stomach. Sweetie, puzzled by my sudden change of plans, decided to go for the grilled fish himself, that day a branzino. He also ordered their pasta e fagioli after the tempting taste he’d had the night before. 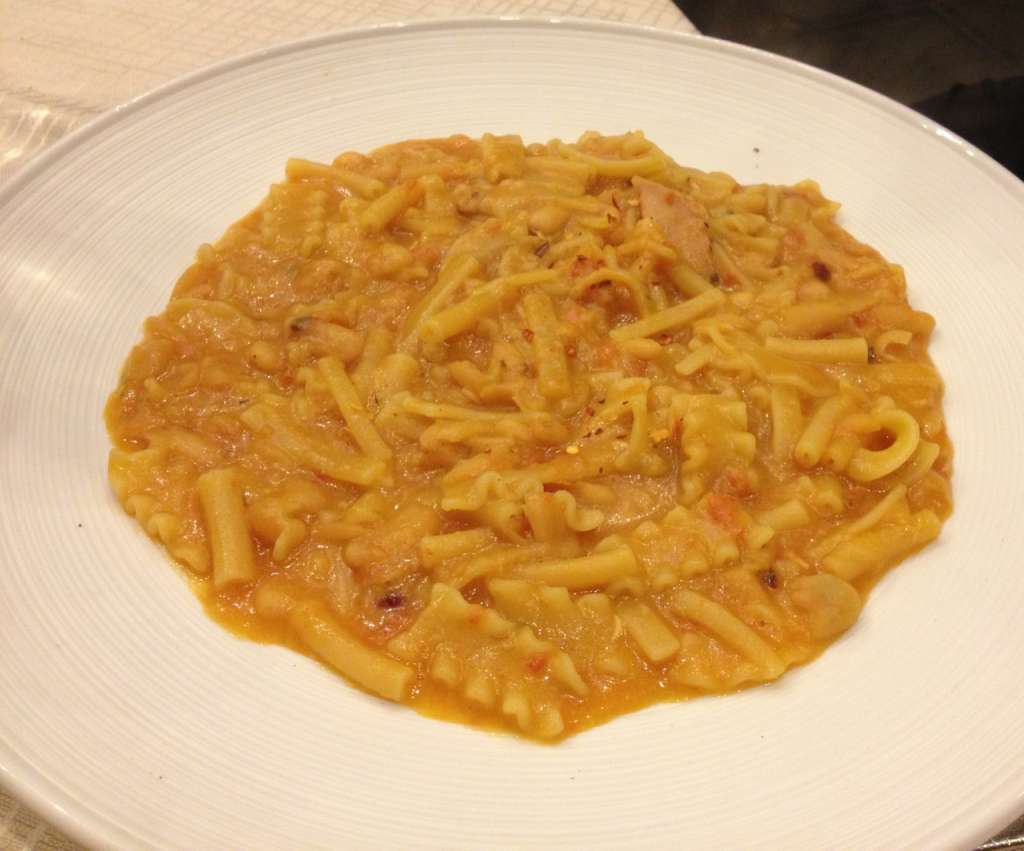 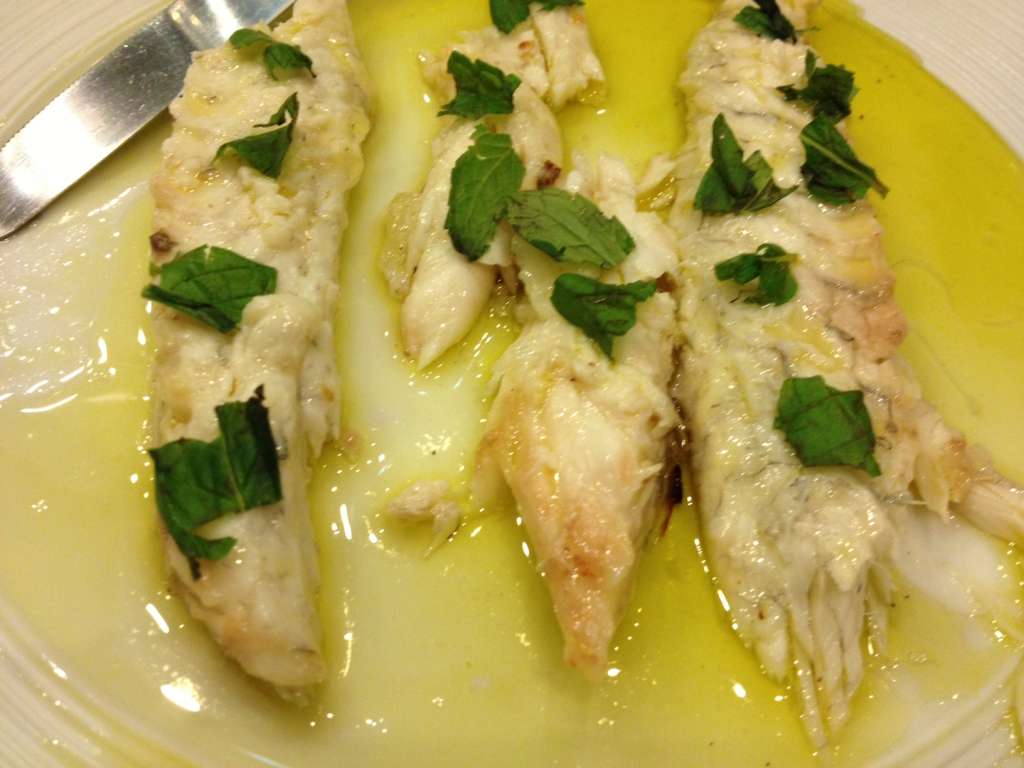 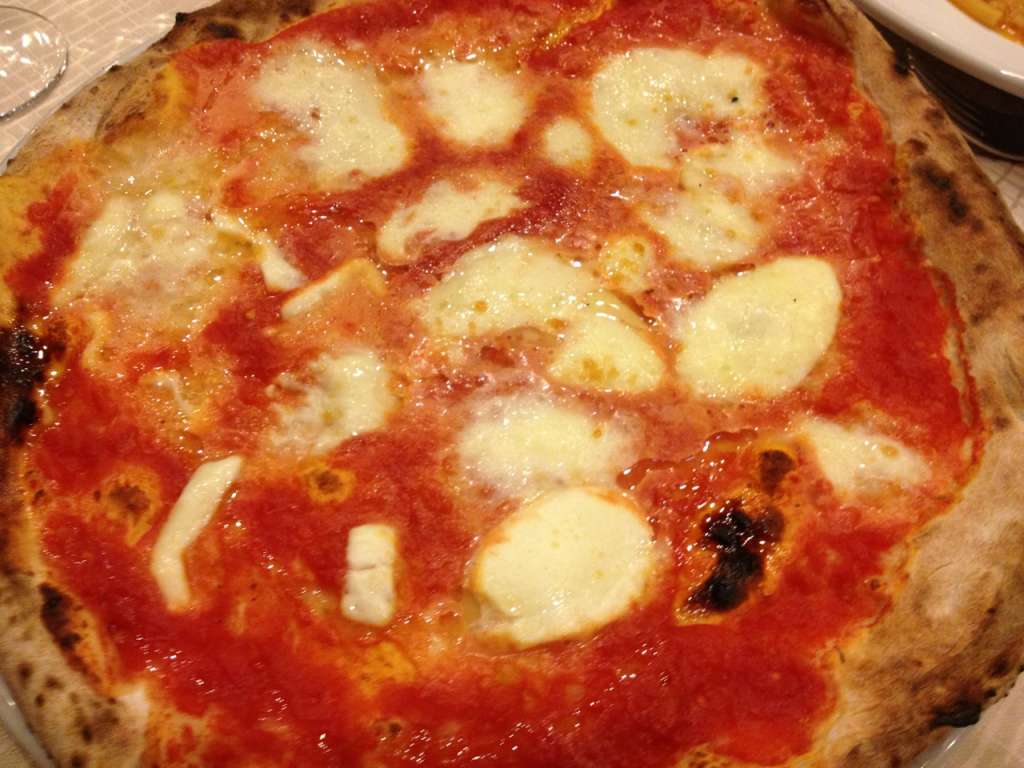 We enjoyed the meal with a pleasant bottle of local white wine. This went down quite easy on my stomach even despite my continued queasiness, which kept me from enjoying more than about half of my very good pizza. Sweetie’s branzino was especially tasty, very delicately prepared with a subtle but unique touch of fresh mint.

The meal was quiet, simple and delicious. We just felt bad for our hosts at the restaurant who kept forlornly staring out at the rain, smiling at us sadly and holding their hands up to Heaven. What to say? When there’s rain and cold weather there are no customers. But we enjoyed the meal and I took back the remainder of my pizza to make for a tasty snack the next day. Hopefully the weather would improve, but no matter what I was ready for a good night’s sleep.