It was time at last to say goodbye to Naples and head on to the next destination for our trip: the city of Salerno.  This was going to be an interesting experience, as neither of us had ever been to Salerno before or really knew what to expect. I was hoping I’d made a good choice as well in deciding to explore the Amalfi Coast from this location instead of the generally more popular (with tourists at least) town of Sorrento. Our guide books said next to nothing about Salerno, but I’d read online that it tended to be more lively in the wintertime than other coastal towns, it would save us time in heading further south to see Paestum, and conveniently it was also directly on the Frecciarossa high speed line connecting to Rome and Naples.

In searching for accommodations online I’d also found what sounded like a wonderful bed and breakfast in the city for our stay, Salerno Centro. It had excellent reviews on TripAdvisor and the owner, Francesco, had been wonderful in our pre-trip communications, offering to arrange numerous day-trips and activities for our stay. So I was pretty excited as we left Naples that day by train, arriving in Salerno less than an hour later, just about midday.

Francesco and his father Pasquale met us at the train station to drive us to the B&B, which is located in the historic center of Salerno in a lovely 16th century building (that had once been a convent).  Once there we were introduced to Kaoru, who also works at Salerno Centro and would be there every morning to greet us with breakfast of our choosing. Francesco provided us with some useful maps and brochures for attractions around the area we could check out on our own, and we also firmed up plans for visits to Paestum, a drive along the Amalfi Coast, and also having a cooking lesson/dinner one evening with Francesco’s mother Lena. After unpacking and resting up a bit, we decided to head out and start exploring Salerno on foot. 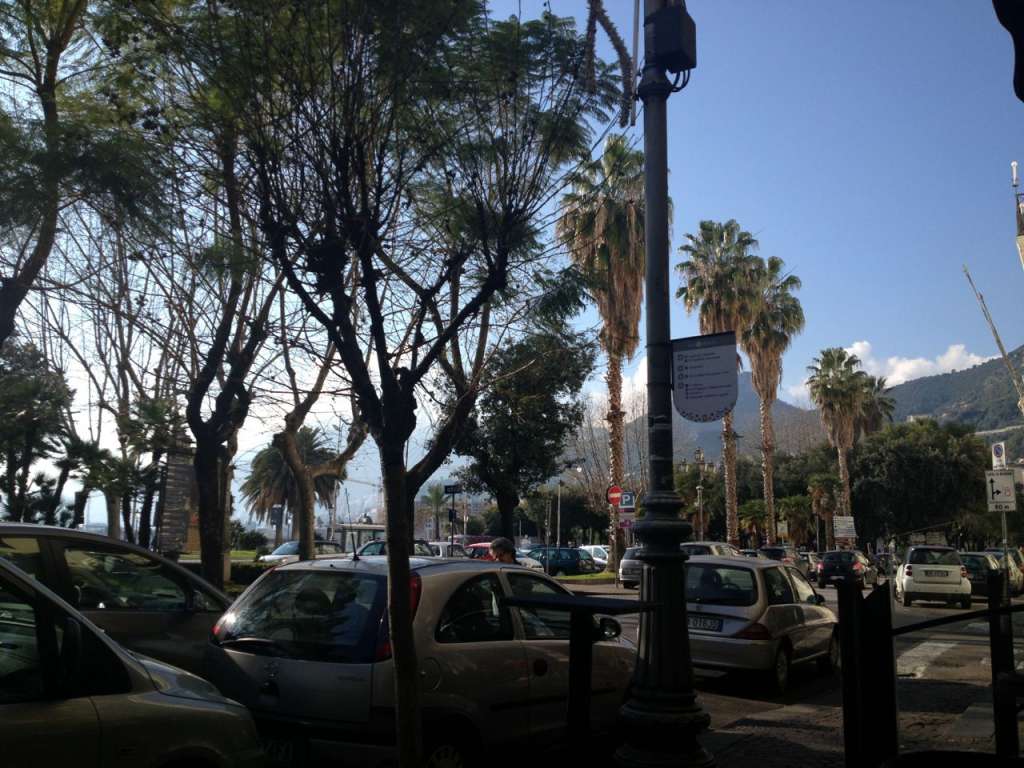 Enjoying the view at Bar Rosa in Salerno

First stop was a quick sandwich—and a spritz of course, at Bar Rosa along the waterfront. We enjoyed the sunny weather outside and the view of the bay, and the relative peaceful charm of Salerno after a week in busy, noisy Naples. From there we continued on a short walk to the Duomo di Salerno, because of course we always need to see the notable churches and basilicas in any town we visit! 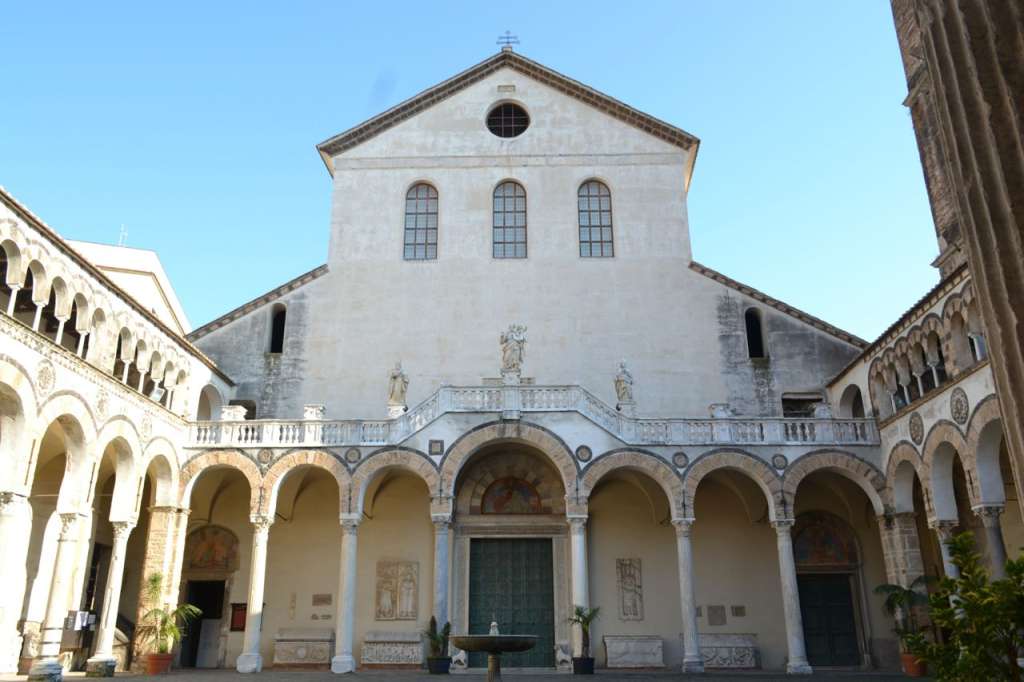 The Cathedral of Salerno

The church dates back to the 11th century and, it should be noted, contains the supposed remains of Saint Matthew in its crypt. I would think that the relics of one of the four evangelists would draw more pilgrims and reverence than it does; while we were there, only one other person was at the crypt in prayer. 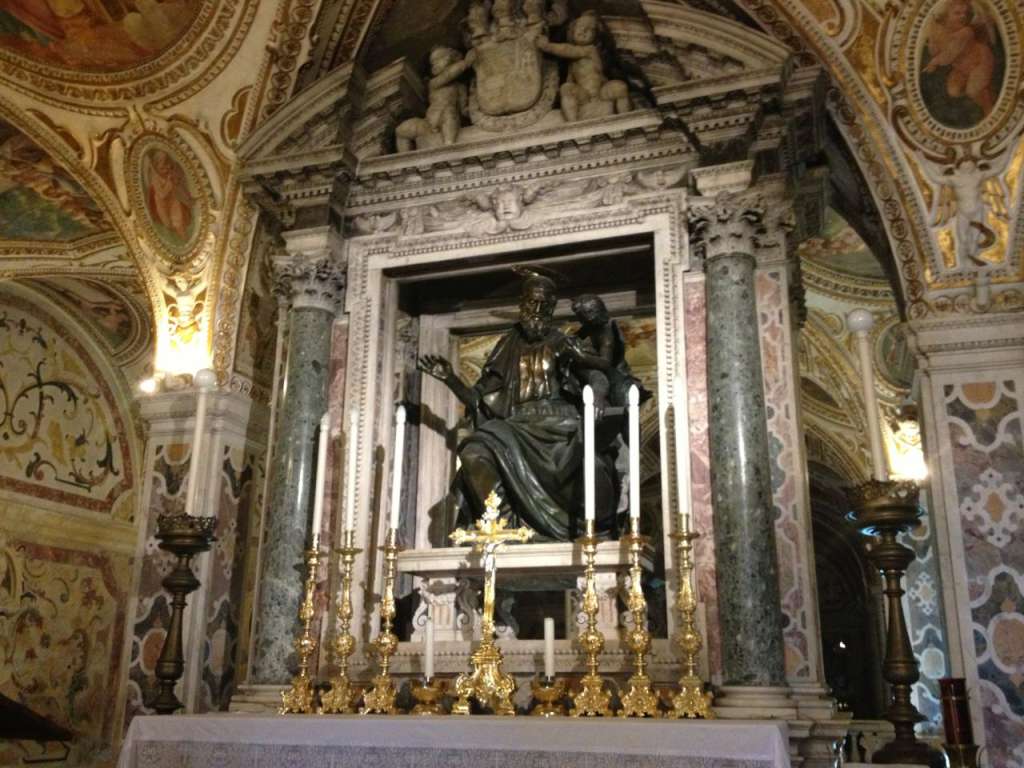 The crypt of Saint Matthew at the Salerno Cathedral.

It was while in the crypt that the sweetie had a minor panic attack—he had left his messenger bag (with his Kindle and guide books) back at the bar! At least a half hour had passed, and he was sure it would be gone. But he hurried back to the bar “just in case”, and much to our relief and surprise, the yellow bag was still there where he’d left it (with all of its contents intact as well.) Score one for honesty in Salerno! And perhaps Saint Matthew was looking out for us. We returned to the church to explore more—and to leave a generous donation for the saint just to stay in good graces… 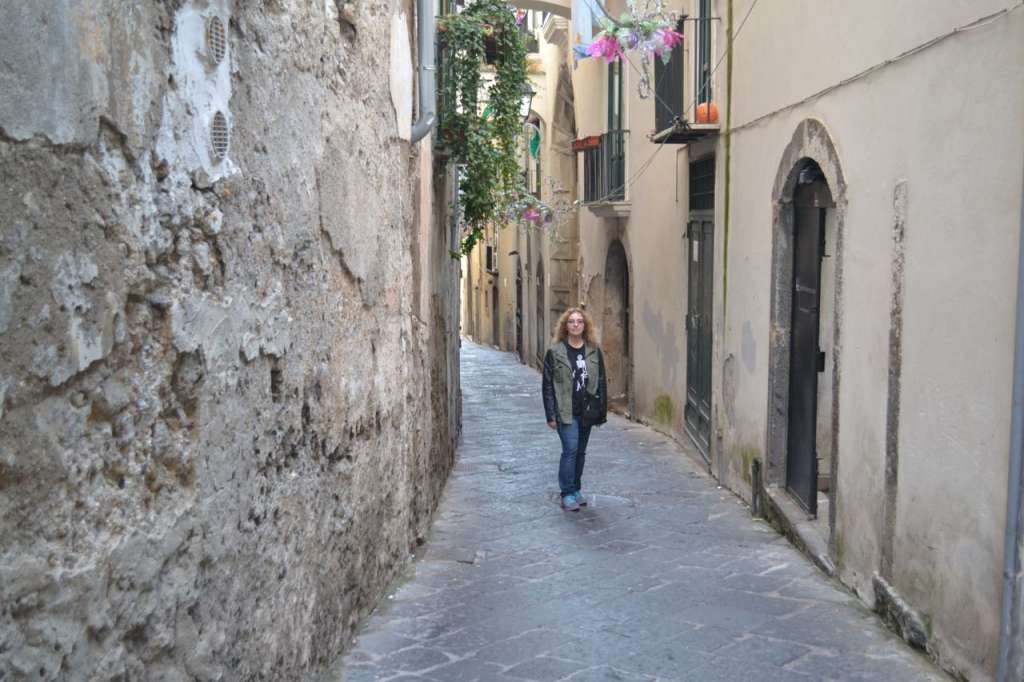 Winding streets in historic Salerno, a very easy city to explore on foot.

From there we continued wandering about the streets of historic Salerno, although now it was mid-afternoon and most shops and businesses were closed until 5pm. We spent a little time relaxing in the public gardens, watching mothers and their children stage an impromptu soccer match amidst the tropical vegetation. Then we decided to walk along the waterfront to enjoy the sunset, as others were doing now that it was time for la passeggiata. 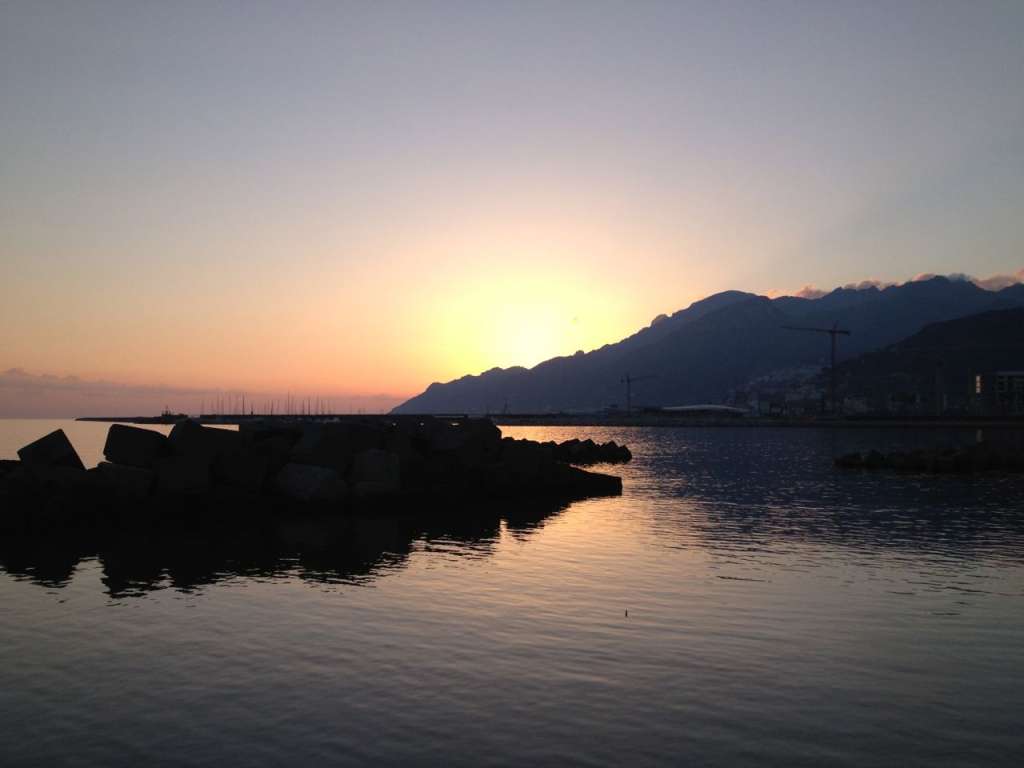 Sunset along the bay…

We found our way back to our B&B and decided to take a short rest before heading out for dinner. Our hosts at Salerno Centro had explained that we had arrived in time to still see the city’s unique Christmas light display, the Luci d’Artista. This annual display of charming, fanciful lights takes over the entire city, from giant trees made entirely of lights to a Chinese dragon and even lighted penguins along the water! So once it was fully dark outside we returned to the streets, to check out the colorful displays along with many other visitors to the city. 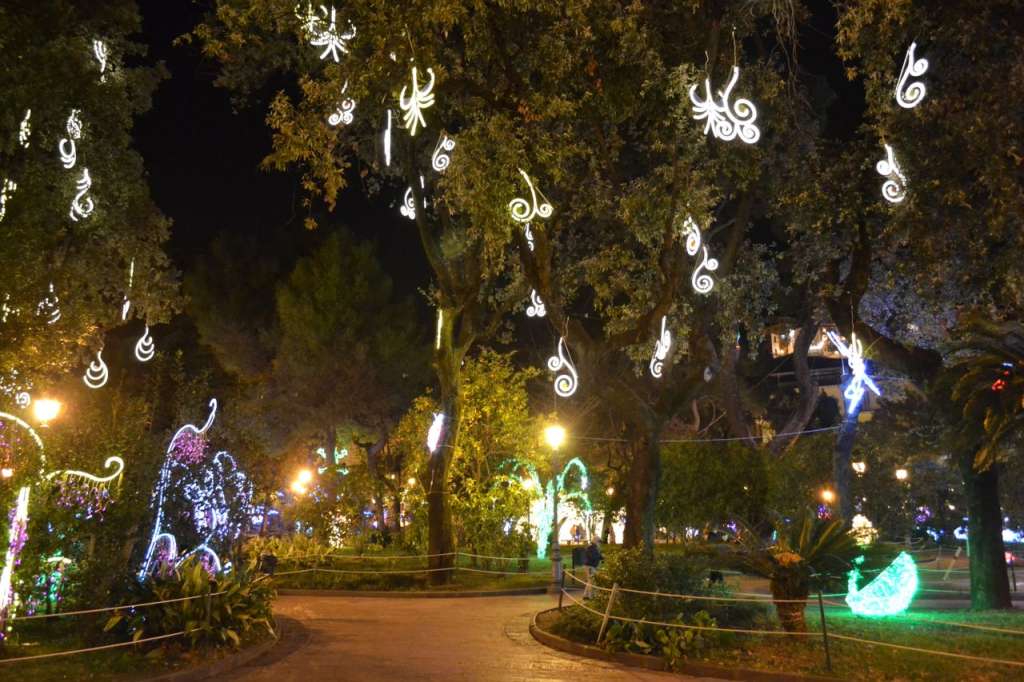 The public gardens lit up for the Luci d’Artista

We wandered around for at least an hour or two, taking it all in—and also trying to decide where to eat for dinner. We also did a little shopping now that stores were open for the evening, and got a recommendation from one ceramic artist to try Antica Pizzeria Vicolo Della Neve if we wished to try a hearty, “traditional” Salerno meal. Well, I’ll always take the recommendation of a local over a guide book, so we decided to follow his advice.

It wasn’t even 8pm and the restaurant was already getting packed—surprisingly early for Italy! Fortunately there was a table for two we were able to (tightly) squeeze into and start looking over the menu. The offerings at Vicolo Della Neve are definitely unique and a little different from what you might be used to at a typical trattoria or pizzeria. They offer a number of different pizzas, but only one primi: their signature pasta e fagioli. Beyond that there are a large number of vegetable dishes, a few meat offerings (largely organ-based) and salt cod with potatoes for a seafood option.

Making a decision was difficult— especially as when we first tried to order, our waiter ran down the list of items which were not available that night, and he was very adamant about not understanding a word of English which was fine, I was trying to stumble through ordering in my poor Italian. We ended up deciding on two vegetable dishes (stuffed artichoke and mixed roasted vegetable) along with their salt cod with potatoes that looked delicious on another table, and the steak piazziola.

While we were waiting, sweetie started drooling over the pasta e fagioli brought to a neighboring table. It definitely wasn’t like the typical pasta and bean soup served at home, but instead more of a baked pasta with a thick white sauce from the beans. Much to sweetie’s delighted surprise, the friendly gentleman at that table asked if we would like a taste and then gave us a small plate of it to try. Talk about Salerno hospitality! Not that we had to wait long for our own food, as our dishes started coming out quickly, one right after after another. And wow, was it a lot to eat. Very hearty, rich food and quickly filling—but delicious! My favorite was definitely the stuffed artichoke, as it was wonderfully tender from slow-cooking and filled with cheese, ham and spinach. 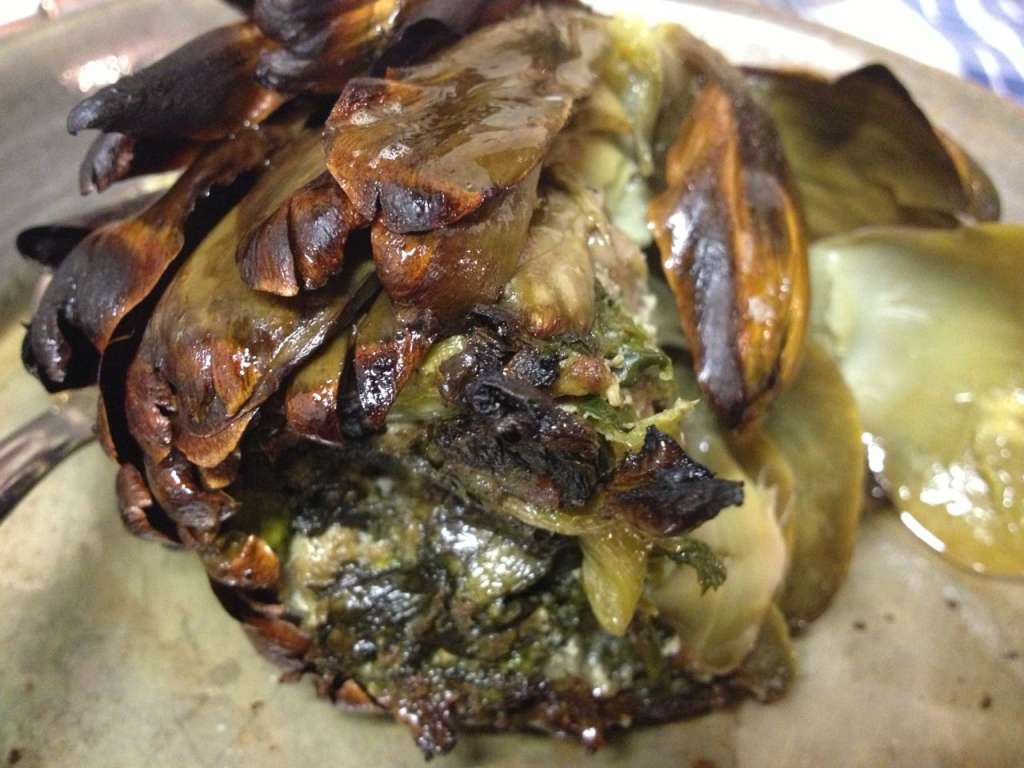 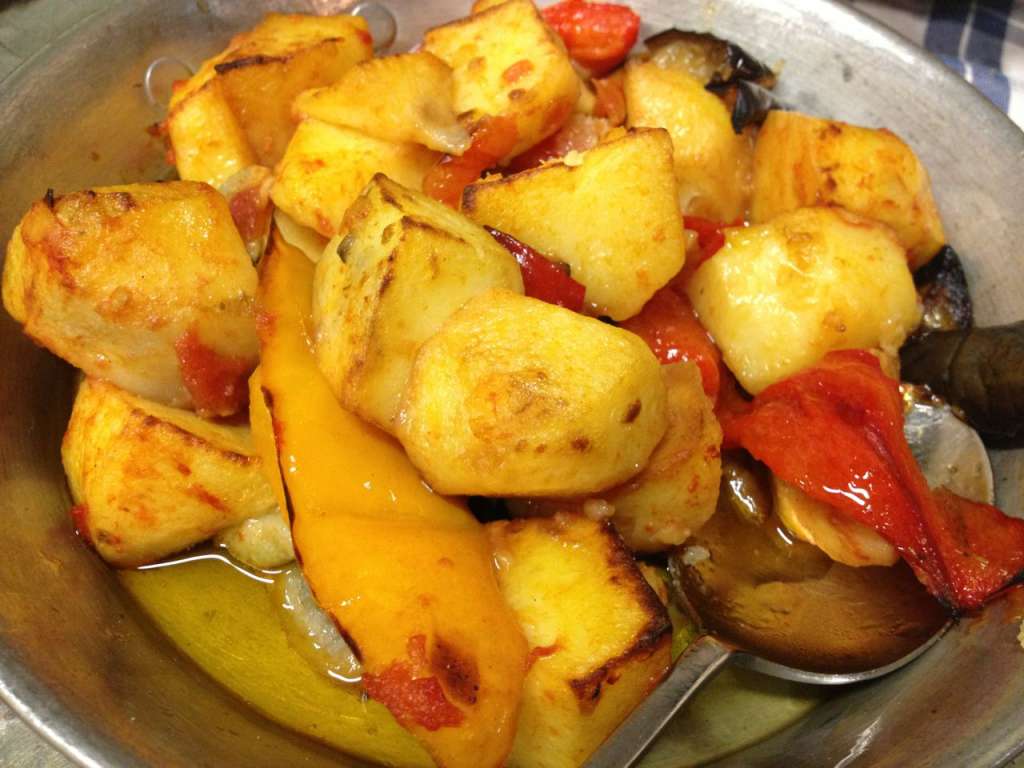 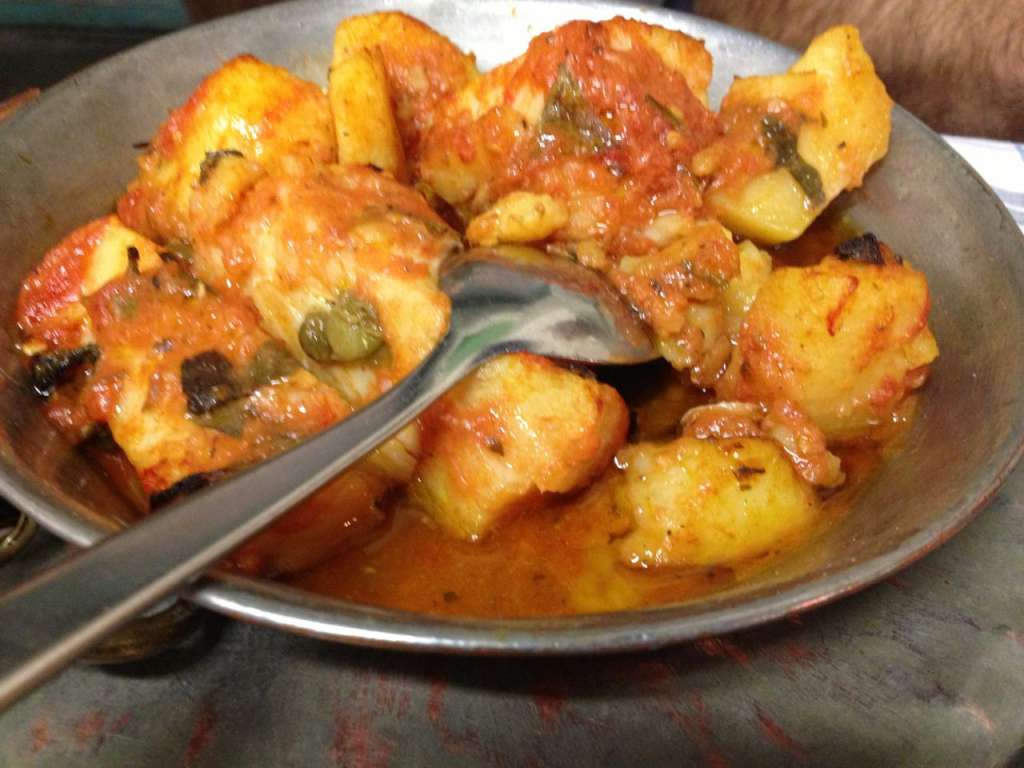 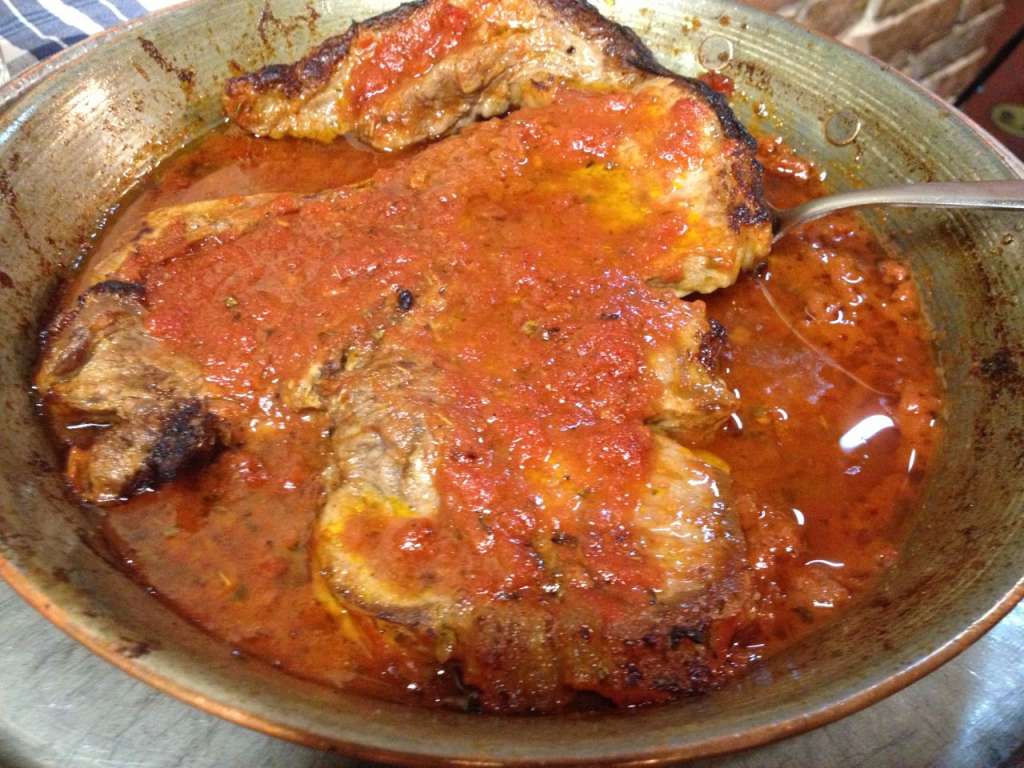 Sweetie loved it all, saying the food very much reminded him of “Italian grandmother” fare back home in South Jersey. Maybe, but it wasn’t like any kind of Italian-American food you’ll get in most South Jersey or Philly restaurants. We didn’t really have room for it but we still ordered one of their house specialty desserts, the pastiera di grano made with ricotta. It was fortunately not too heavy and a good ending to the just-about gut busting meal. 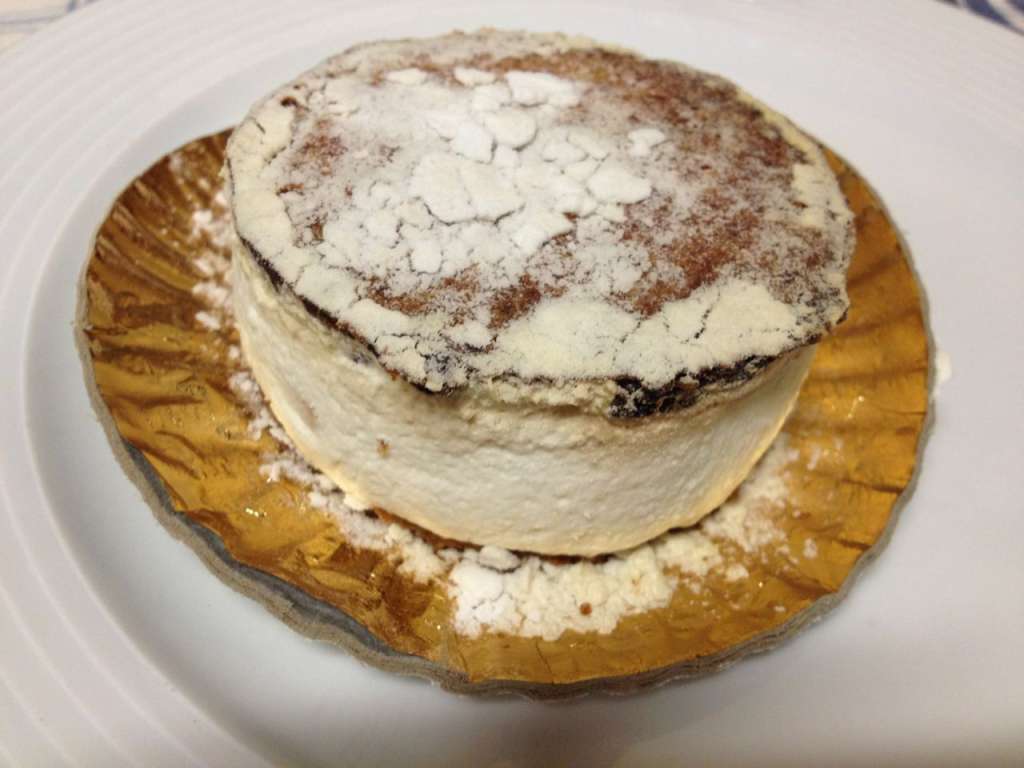 We managed to stagger back to the B&B extremely full and tired after this day exploring Salerno. Talk about a great first impression of a city—and it seemed like we were going to be finishing up our trip having plenty of fun new adventures.