We only had two more full days in Naples, so it was time to knock out as many “must see”s as possible. Most importantly we wanted to get to the two Caravaggio paintings in Naples we had not seen yet, and I had finally figured out exactly where one of them was on view: the Gallerie d’Italia in Palazzo Zevallos Stigliano. The Gallerie has a small but very nice collection of works by artists of Southern Italy, but its crowning piece is Caravaggio’s Martyrdom of Saint Ursula, believed to be the artist’s last finished painting.

Buy This at Allposters.com

It’s a dark and somber piece (even for Caravaggio), and one that has suffered from difficulties in restoration. The arrow piercing Ursula’s chest is but a ghost, and her skin so colorless we wondered, as painters ourselves, if perhaps he never finished the final flesh tones or if they had been lost in time and poor cleaning efforts. Still, it was well worth seeing the work as well as the magnificent palazzo.

Once we were done at the Gallerie, which was perhaps an hour’s visit, we grabbed a taxi and headed up toward the Capodimonte district and the Catacombs of San Gennaro. We didn’t realize that visiting the catacombs was only through timed entry tours, but we were lucky that a tour was just getting started so the ticket agent hustled us down the sloping entry path and to the site entrance to join the group. 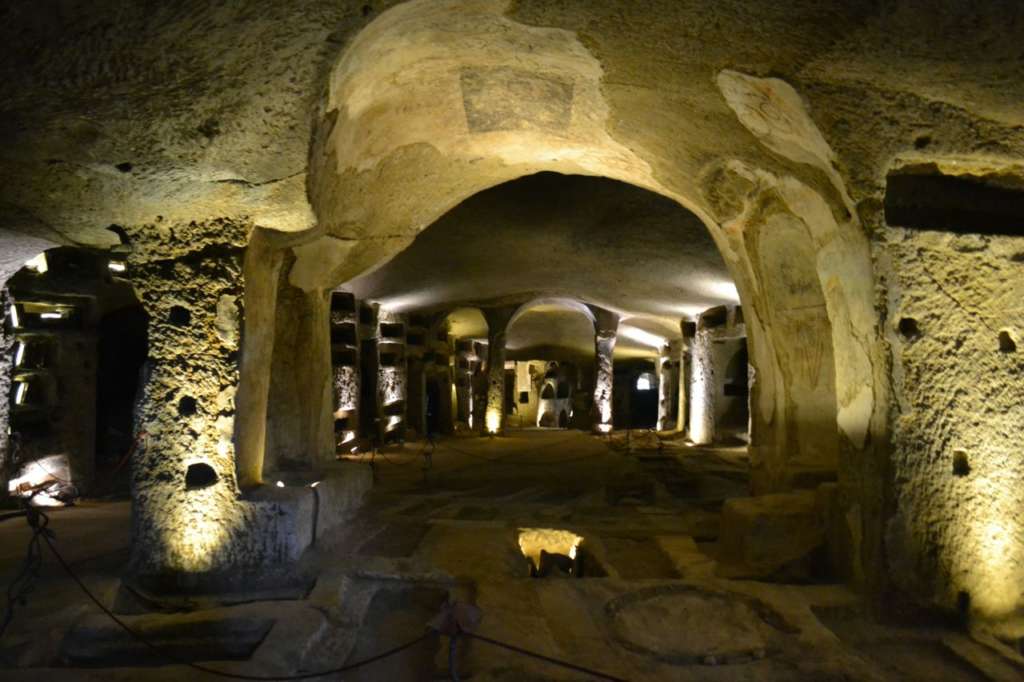 The Catacombs of San Gennaro are huge—the largest in Naples and unique in that it actually takes up two levels of space. It’s very eerie yet awe-inspiring being there, trying to think back to the 3rd and 4th century when the oldest area was created, perhaps even predating Christian religious beliefs and activities. 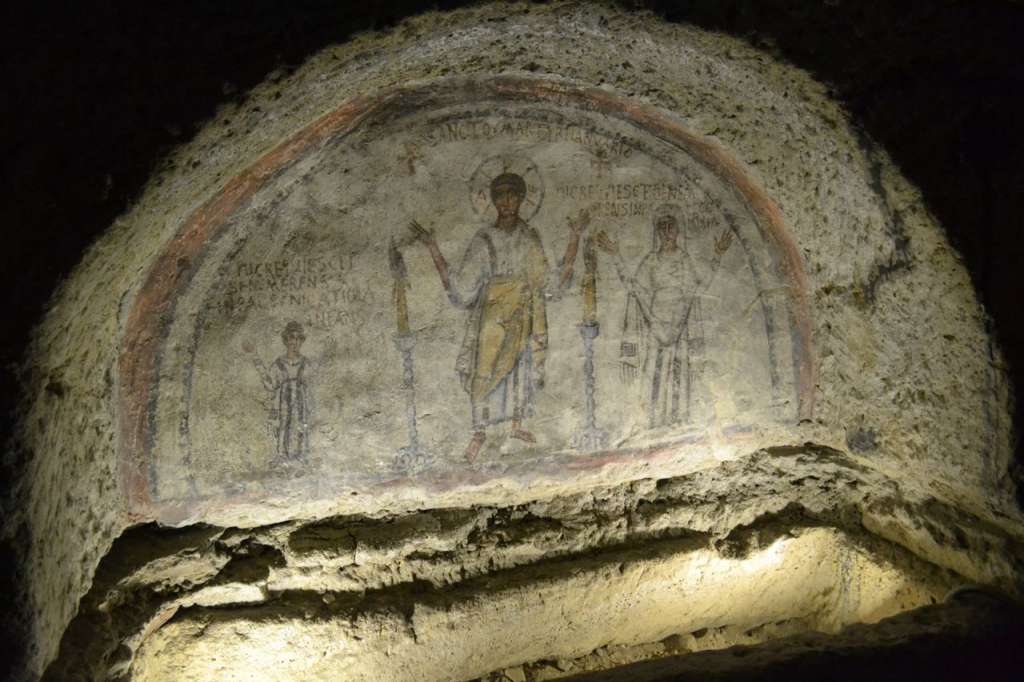 It seemed every one else in our group was Italian and the tour was only being given in Italian—but we didn’t mind, just having the chance to see the place for ourselves. Then the guide heard us speaking English to each other and began offering English explanations and information as well, to us and also a pair of French tourists. That was really nice of her and she was an excellent guide. 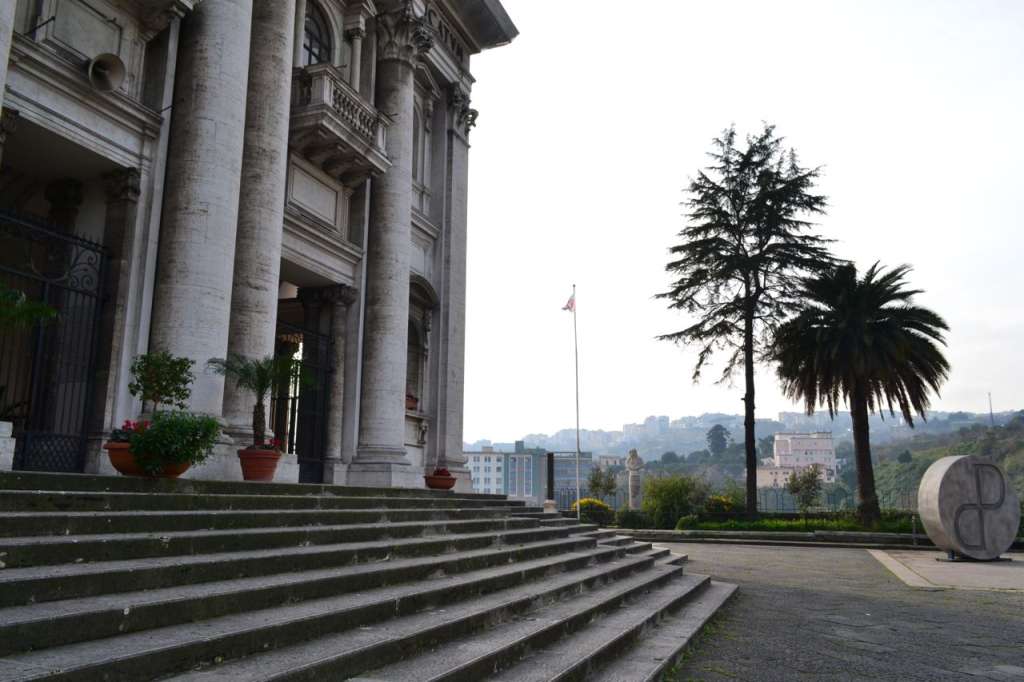 The tour took a little over an hour’s time, finishing in the neighboring Madre del Buon Consiglio church, which now houses various works of modern art. We took in the view of Naples from up high and then asked for walking directions to Museo di Capodimonte, which was next on our list. It didn’t seem far at all based on our map, but the roads here are winding and twisty and without a lot of pedestrian sidewalks. The tour guide from the Catacombs said it was “just up some stairs” she pointed to across the way, so we risked life and limb crossing the busy traffic and began the climb. 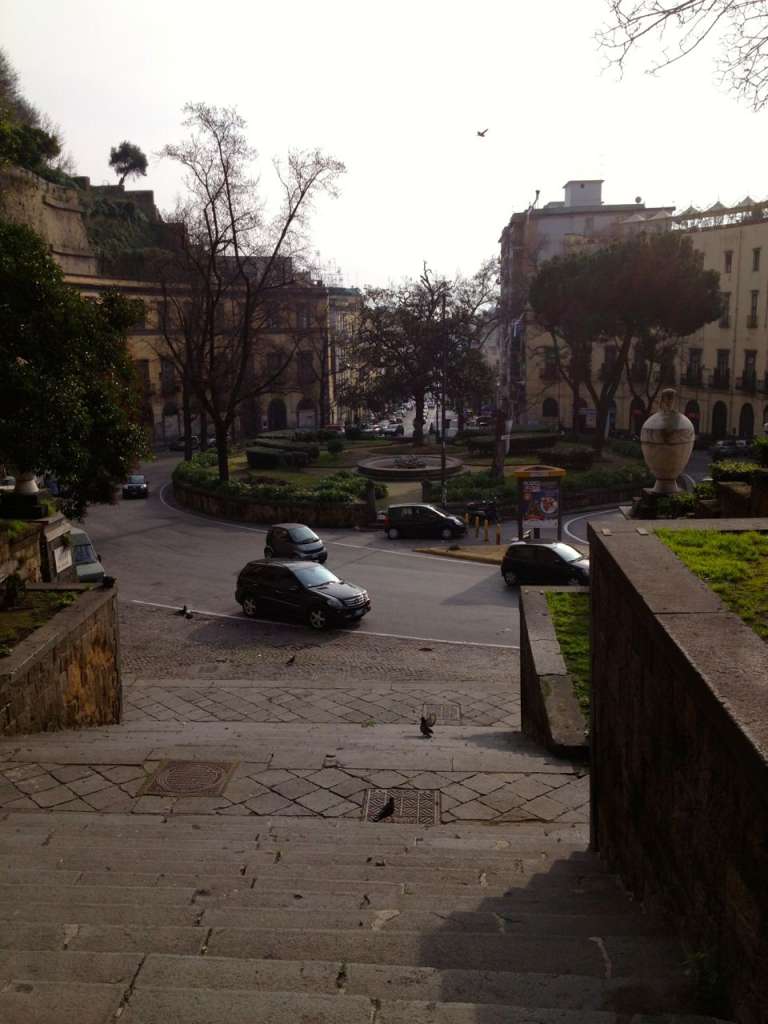 One stairwell and traffic circle done…how many more to go?

By the time we’d made it up two steep sets of stairs and dodged plenty of cars and vespas, it was time for a break – and some lunch as well as it was almost 2 o’clock! The museum is open until 7:30 at night so I figured we had time, and I saw at least one restaurant that was open, the curiously-named Henry VIII Pizza and Grill. 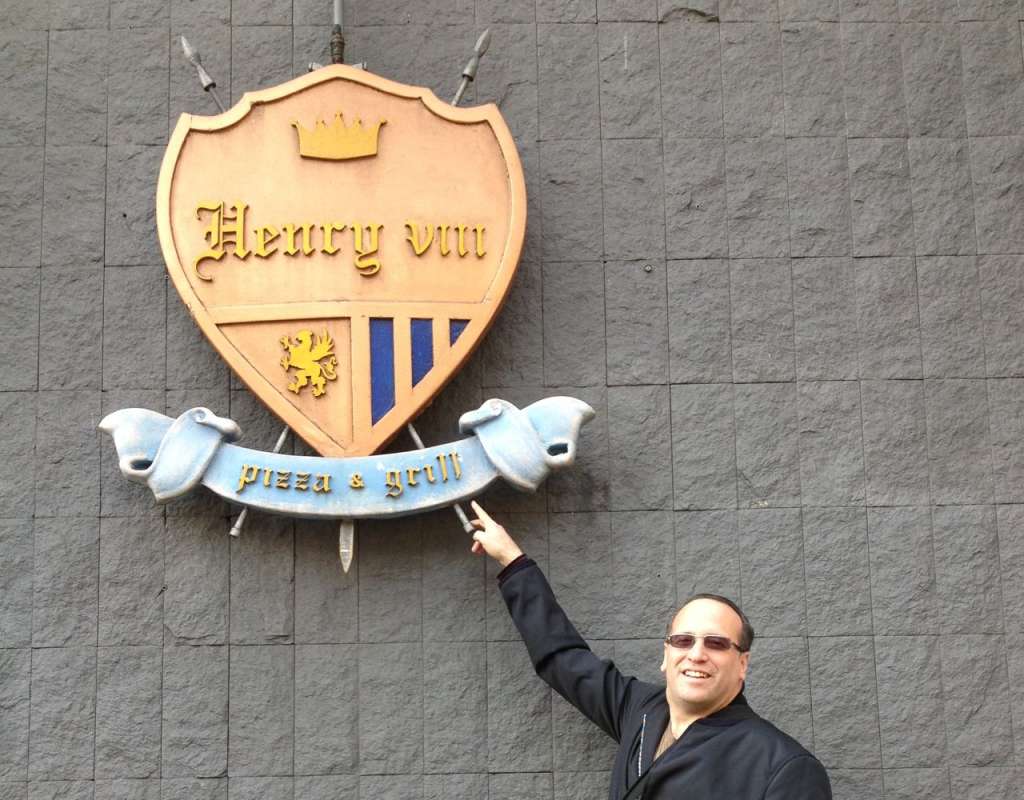 There was only one other table occupied, so we were waved to sit wherever we wanted. It felt good to just sit after all the climbing and walking we’d just done. Our waiter came over and we ordered drinks, but were a little confused when he brought over no menu—nor spoke a word of English. Okay, this could be a challenge. It seemed this is the kind of place where you just ask what they have or suggest you’d like to eat and the chef sees what he can do for you. I understood the waiter offering/suggesting some fried croquettes, which sounded good to start. I’d also seen a “special” on their blackboard of pappardelle with porcini mushrooms, could we order that? That worked. We waited while enjoying a nice bottle of wine, a variety (Anglianico) I don’t think I ever tried before but was really enjoyable, light and fruity.

Our croquettes were good and hearty: a plate for each of us of three different kinds, one of rice, one of cheese and meat, and one I think from potato (I forgot to take a photo—I was hungry!) We had a bit of a wait for our pasta but when it came out, it was totally worth it. I wasn’t expecting such a generous portion of delicious fresh porcini…the noodles were definitely housemade and the entire plate just seriously decadent and delicious. 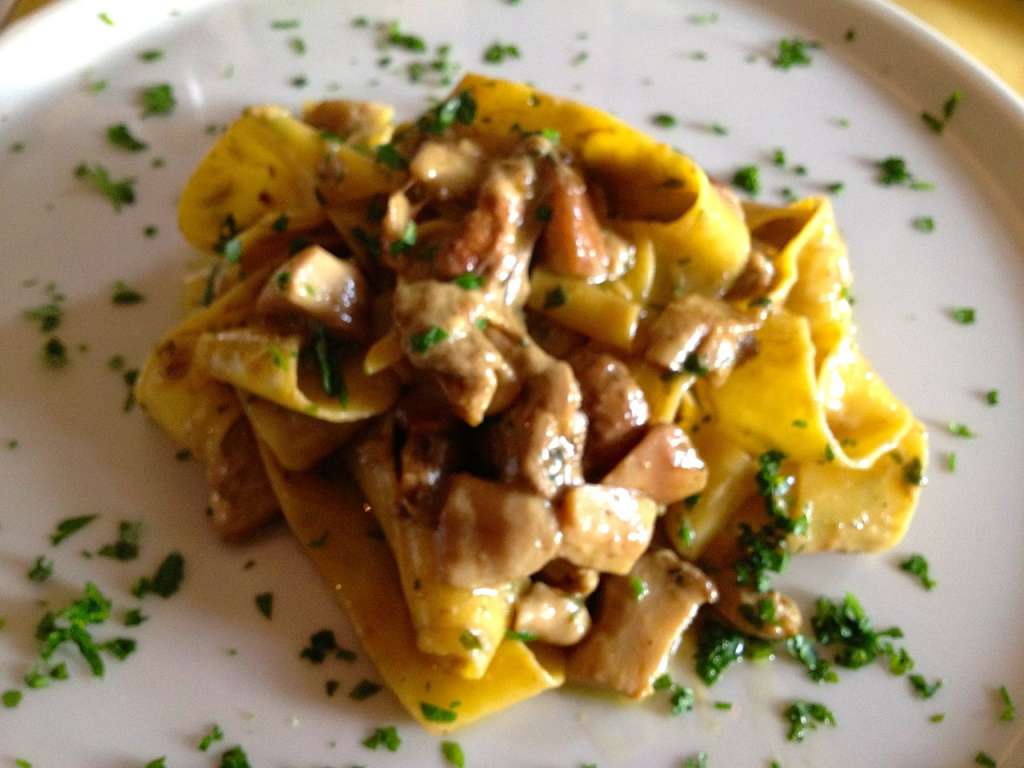 (That may not look like a huge portion but trust me, it was so rich it was actually a challenge to finish them after the croquettes! But well worth the effort.) 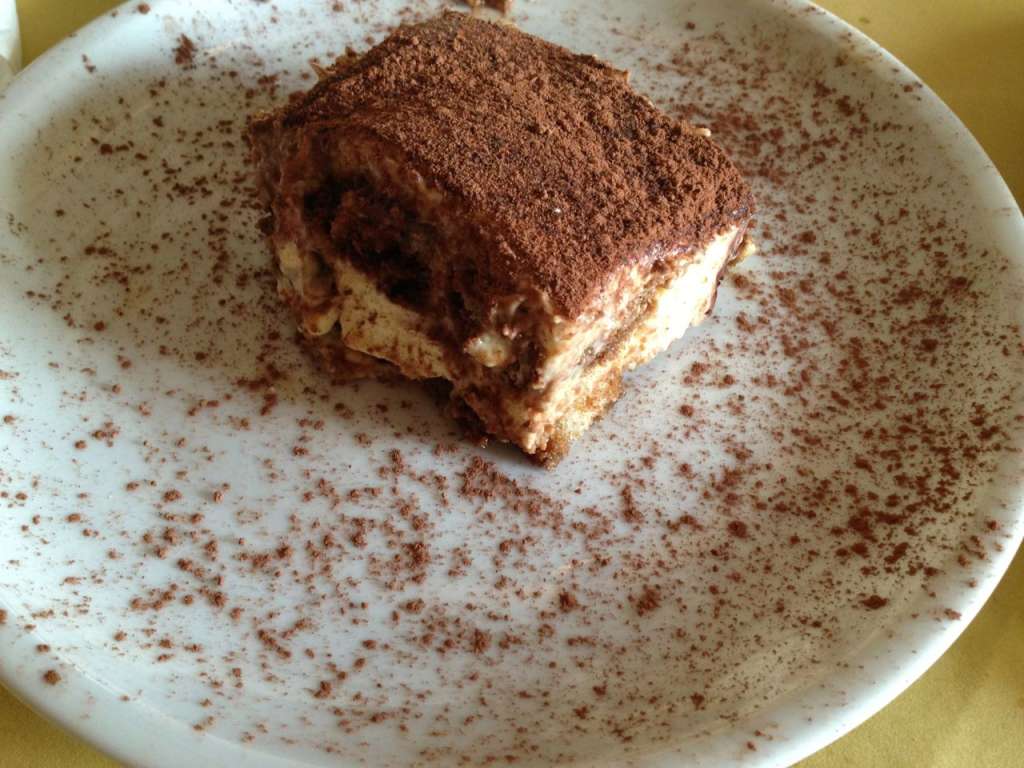 We shared some tiramisu and espresso to help the digestion, and help wake up after such a filling meal. As we were finishing up, the chef came out to start chatting—he actually spoke very good English, along with his brother who joined him soon thereafter. They apparently owned the restaurant together and were just absolute charmers—we talked for a while about everything from Philadelphia to food (I got the recipe for the pasta) and Neapolitan art, and even exchanged business cards with a promise they’d call us if they ever made it to Philly. Before we left they even broke out the limoncello for a round of  shots, and a photograph or two. 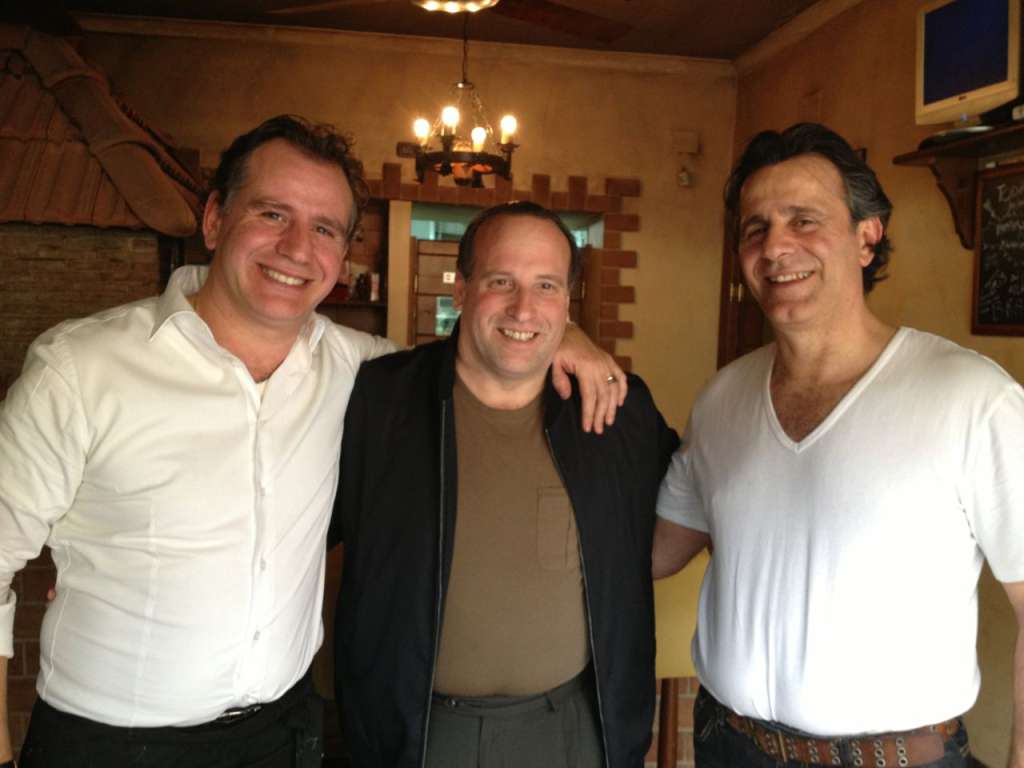 Ok, so it was getting on past 3pm and we needed to get to the museum. We started up another steep staircase, which looked like it was heading toward the museum which we could see at the top of  the hill…but nope. We were completely turned around and getting frustrated. This is where google maps on my iphone really came in handy, as using that I was finally able to navigate us to the museum entrance, circling around and down a slope, crossing more dangerous traffic with no lights or crosswalks in sight, and finally finding an open gate. Whew! I think next time, we’ll just take a taxi straight there. 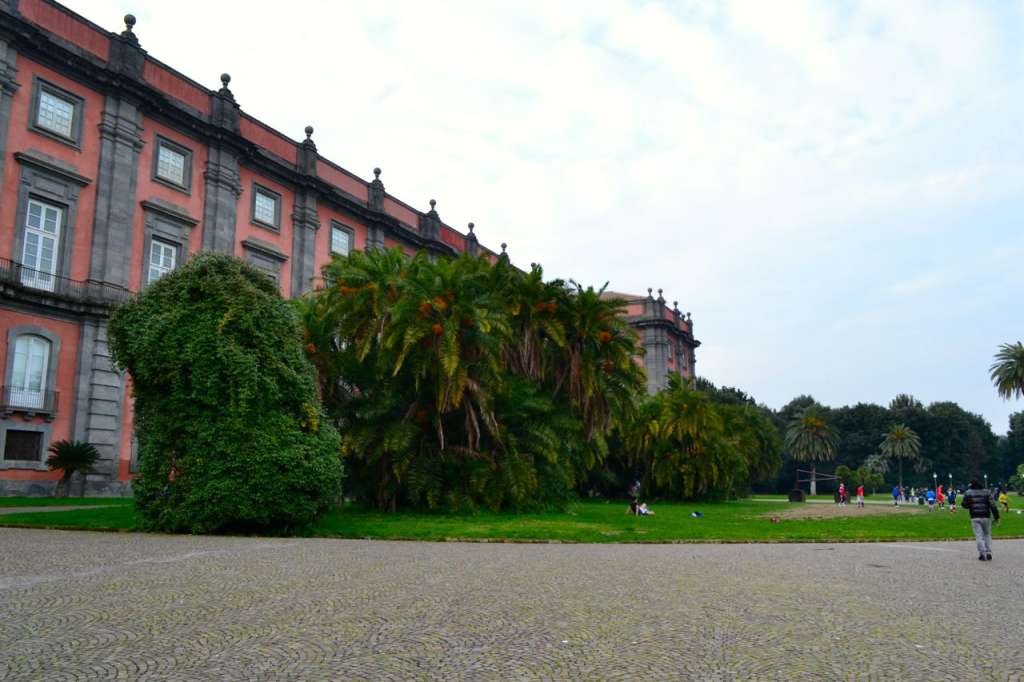 The museum itself is a sight to behold, an immense palace built for Charles III. Originally he wanted a hunting lodge built on the hill, but obviously plans became much grander after that. Again, our tour books let us down by dismissing the museum as not especially that important beyond Caravaggio’s painting and a few other works by Renaissance masters like Titian, Raphael and Lotto. None really stressed how this is actually the largest and easily most important collection of Neapolitan painting and decorative art anywhere. We were highly impressed—and a bit overwhelmed. As the sweetie said, this is definitely a “two day museum” for serious art lovers. 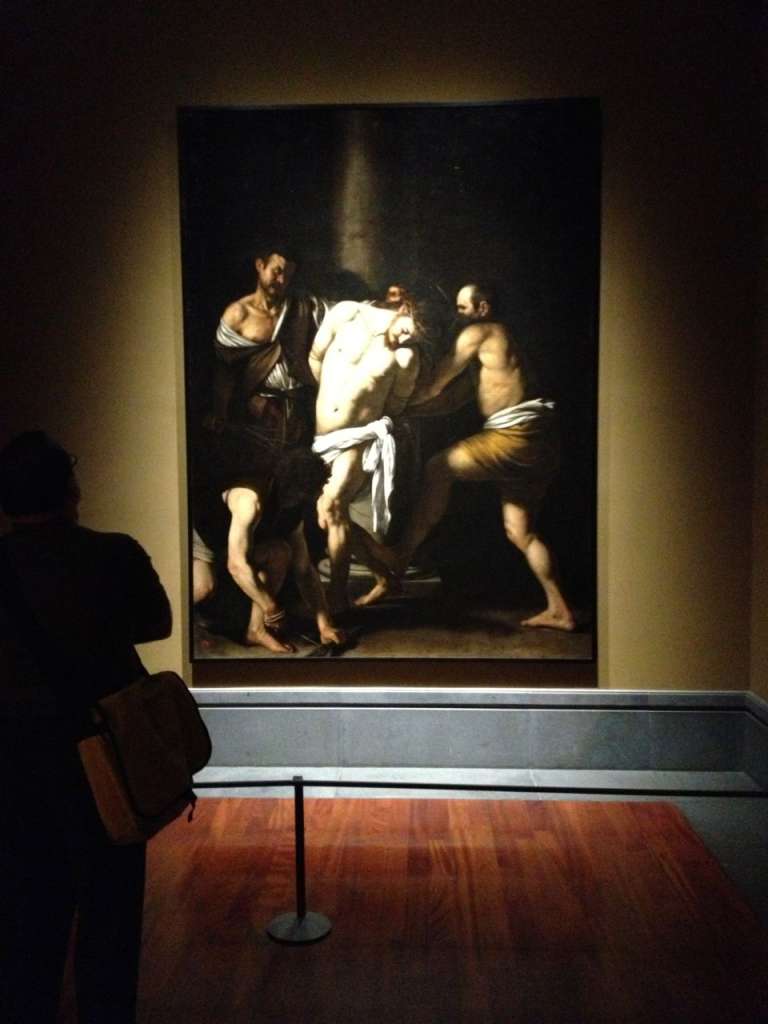 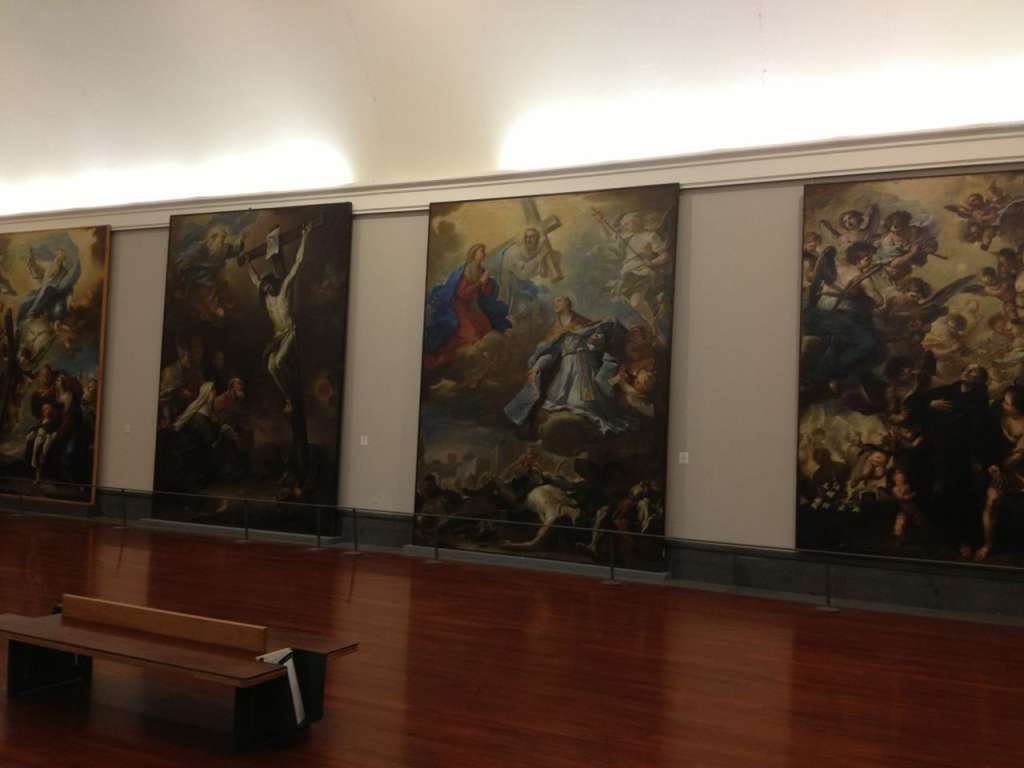 Some of the museum’s impressive collection of paintings by Luca Giordano. 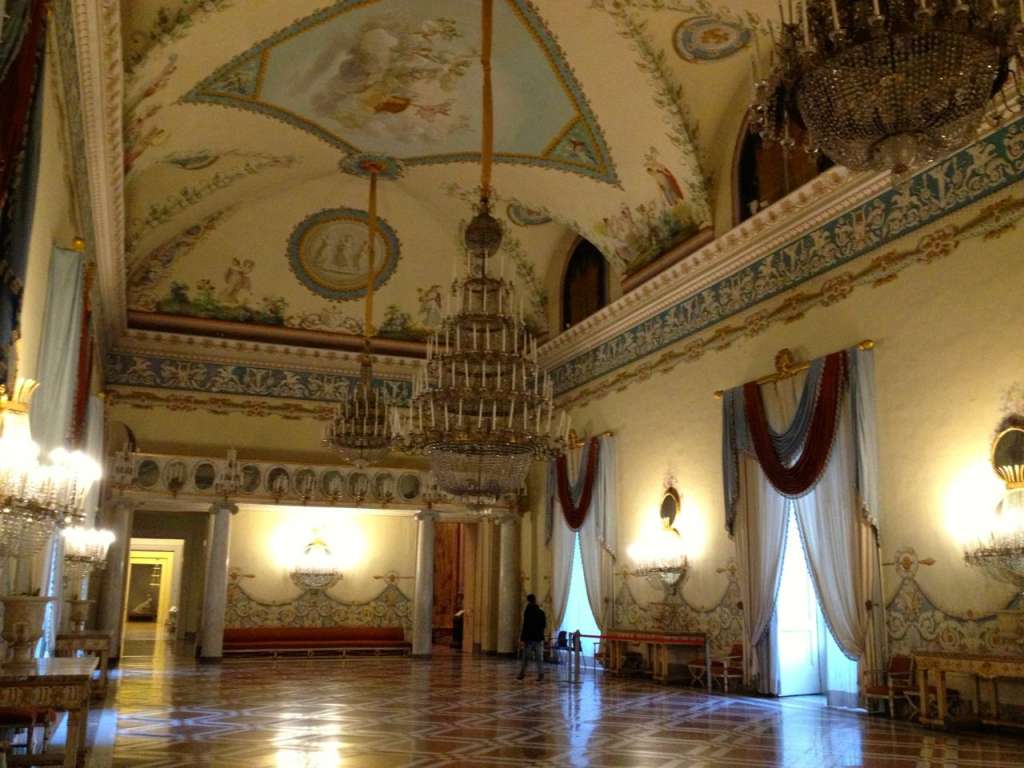 I wouldn’t want to have to light all of those candles.

Adding to the atmosphere at Museo di Capodimonte is just how empty it is, particularly on a late afternoon/early evening. It felt almost like we had the entire museum to ourselves, save a few guards working on crossword puzzles. The quiet made it perfect for really studying and spending time with the paintings, and coming away with a much greater appreciation for the art and artists of Naples.

We spent about three hours at the museum, staying until almost closing time. Fortunately there was a taxi station right outside so we were able to get a cab and head back toward our apartment near the Archeological museum. Tired and not especially hungry after that large late lunch, we decided to just head over to the bars and cafes around Piazza Bellini to have a sit and a drink. We were able to get a table outside at Lemme Lemme, and somehow just ordering drinks turned into getting a couple light bites as well. Sweetie ordered a panini of roast pork which was satisfying enough; we ended up splitting it. I ordered a Caprese salad but it was rather disappointing—the tomatoes were under-ripe, which I’d say is pretty much an unforgivable crime in Naples. It was also doused in a lot of dried spices instead of just oil and basil, maybe to try to cover up the tomatoes? I mostly just picked at the lettuce. That said, our cocktails were really good, especially the house named “Lemme Lemme”, a simple combination of white wine, Aperol and Campari.

After that, time for bed. The college kids were coming out en masse and taking over the square. Well, them and some tremendous mounds of trash. 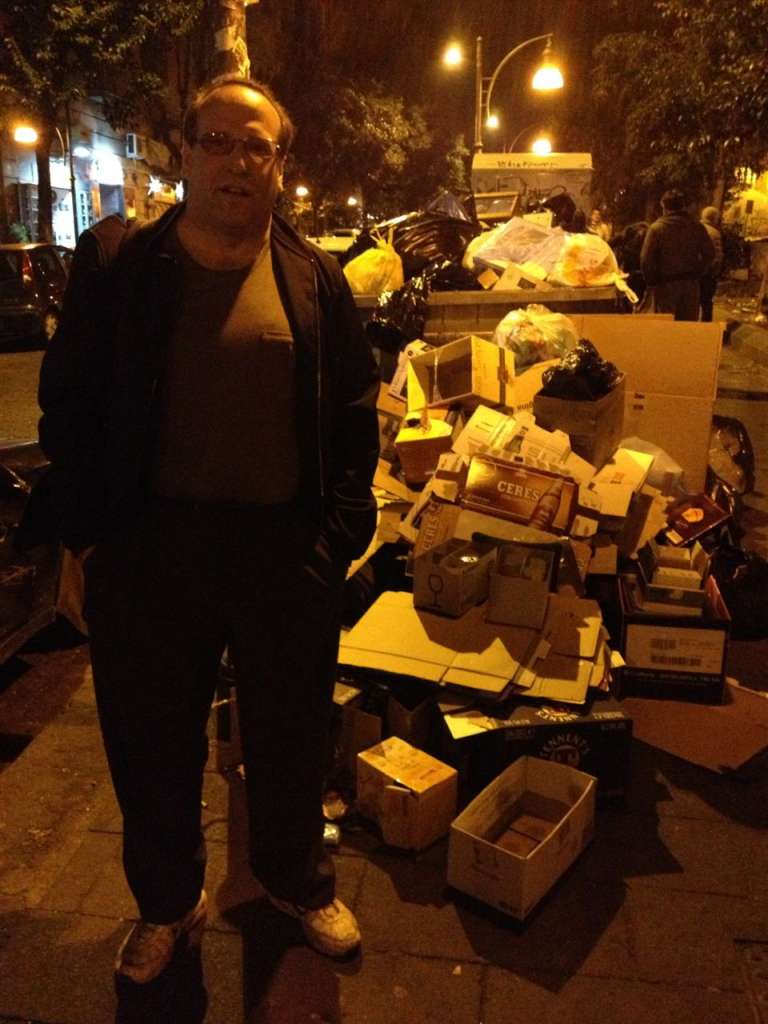 Next stop on our last day in Naples: Ercolano!

This entry was posted in Italy and tagged italy 2014, naples, pasta. Bookmark the permalink.