This is largely going to be a photo post, as we spent the bulk of this day at the archeological site of Pompeii. And really, words generally fail to capture how incredible the experience is. Grand, eerie, haunting, fascinating, reflective…all of these things and more. 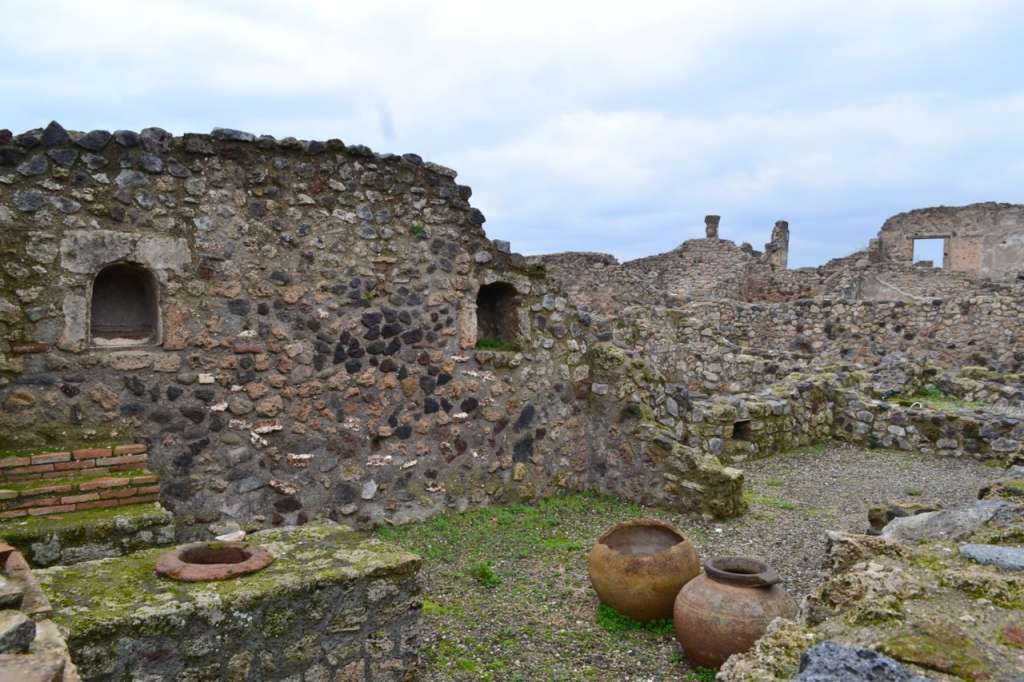 Pompeii is a place I have wanted to visit for years. It was on my list when we first visited Rome in 2009, but we had too much to see and do within the city so we never made the trip. From Naples, however, it is much faster and easier to get to Pompeii; the frequently-running Circumvesuviana subway system is cheap and only takes about 40 minutes to get to the site.

Again, tour books and articles warned it could be a rough ride, but I did not find it much different from riding a NYC subway. The ticket agent in the Naples train station actually came out to show us how and where to activate our tickets and which track to go to. Yes, there were some beggars on the train but again, no different than you will encounter riding one of the main subway routes through Manhattan. In less than an hour from the main station in Naples, we were at the Pompeii Scavi station and only a few feet away from the main entrance to the site.

Being January, about 11 in the morning, there was no ticket line. There were people lingering around offering a guided tour but as usual we chose to wing it instead. For the first 2 hours or so, we followed the self-guided tour plan outlined in Rick Steves’ Snapshot Naples & Amalfi Coast book. This was a perfect way to get an introduction to the city and major attractions. Buried in the 79AD eruption of Vesuvius, it is a fascinating glimpse back into Roman life at the time in what was almost a “resort town” of holiday villas for the well-to-do. 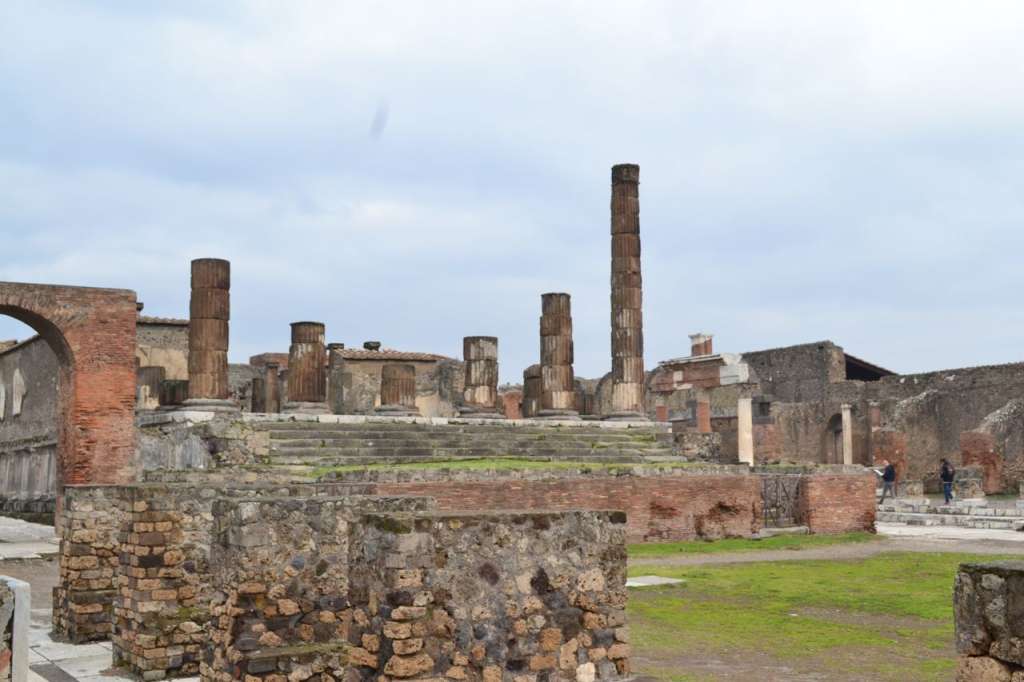 The Forum of Pompeii 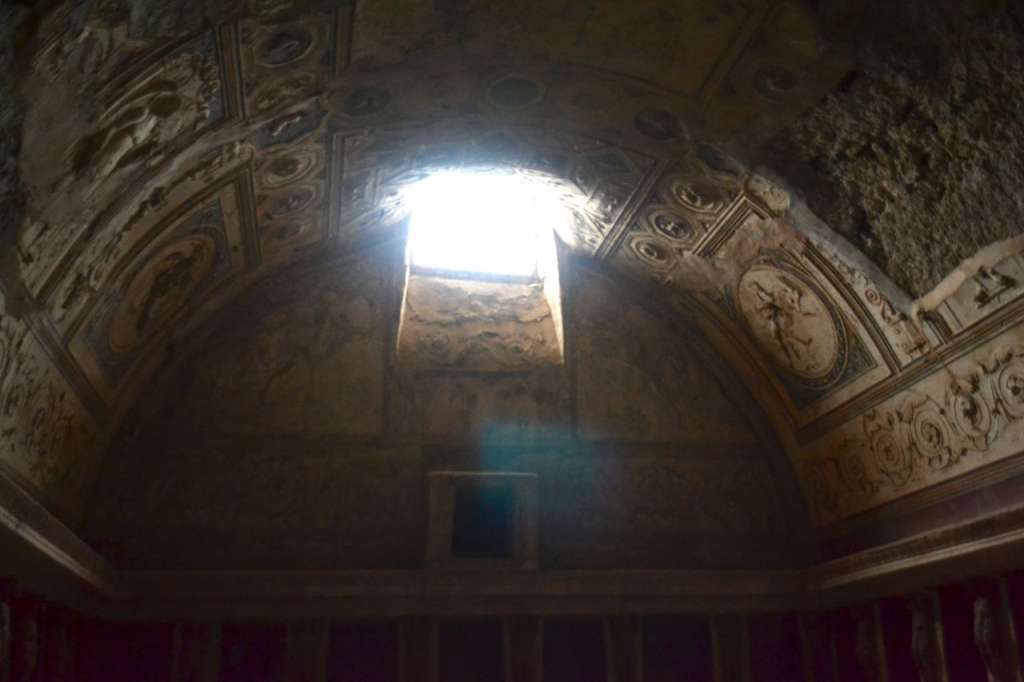 One of the Baths 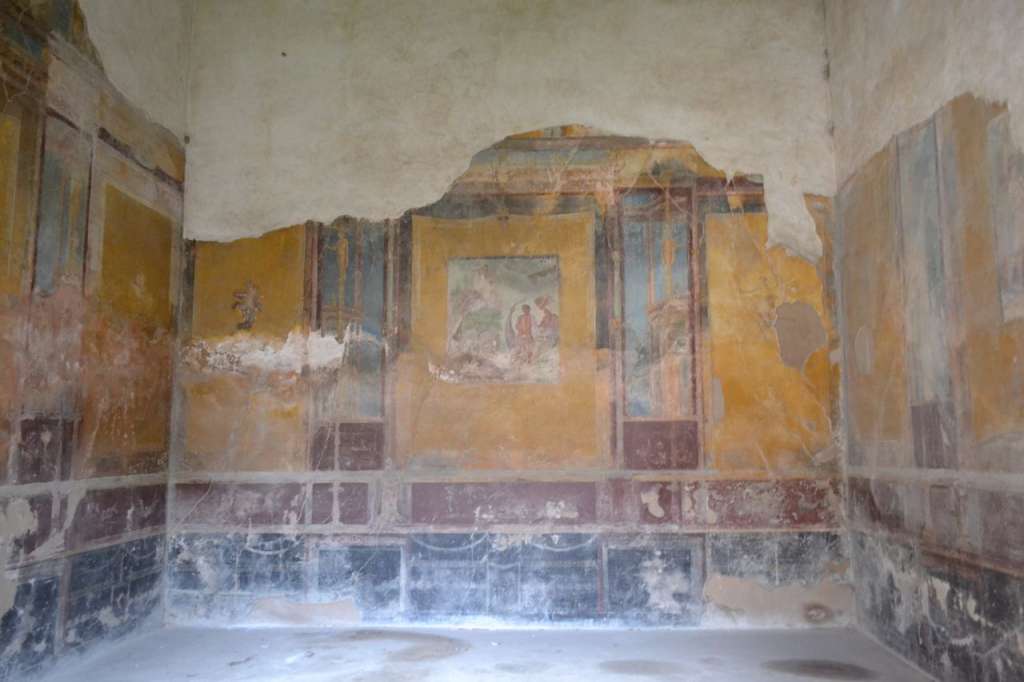 Frescoed room in a villa 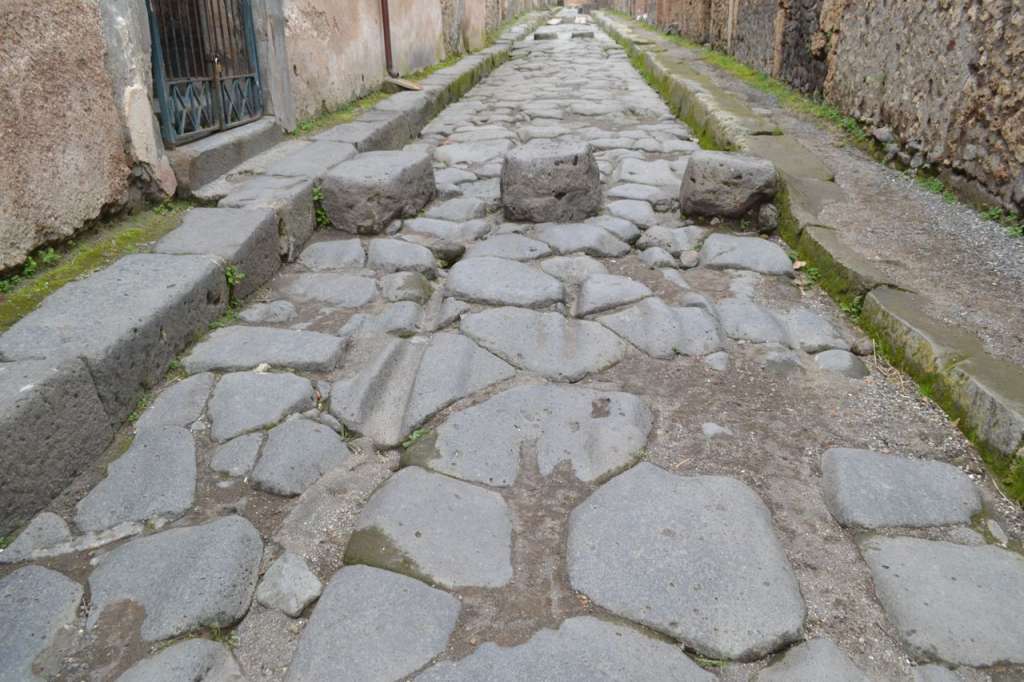 An ancient road – notice the worn grooves from chariot wheels. 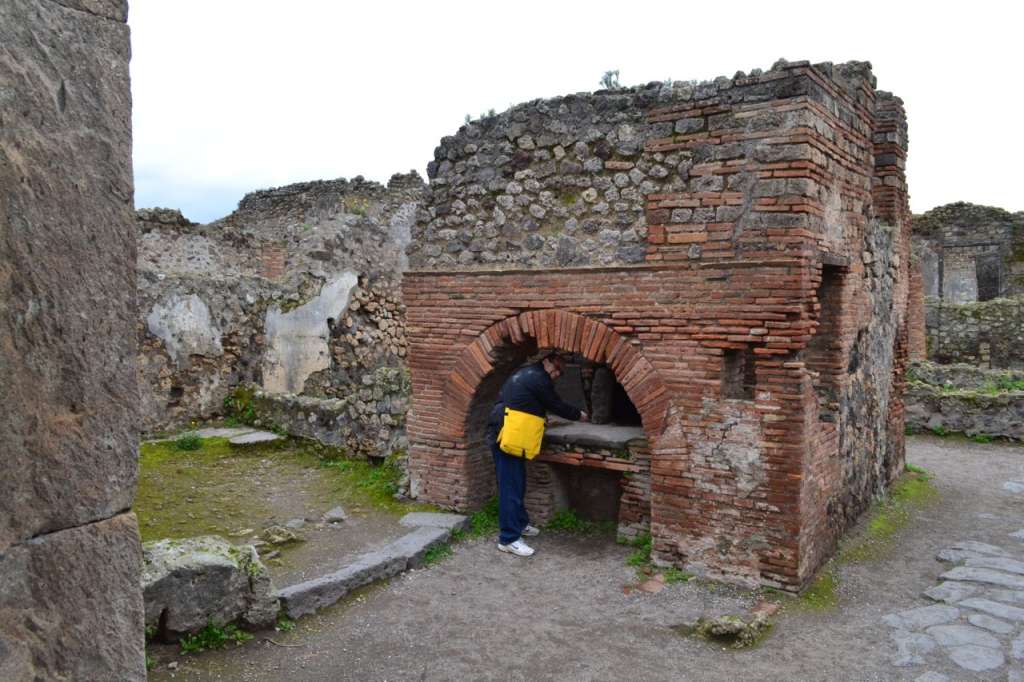 A bakery oven – not much different from a modern pizza oven. 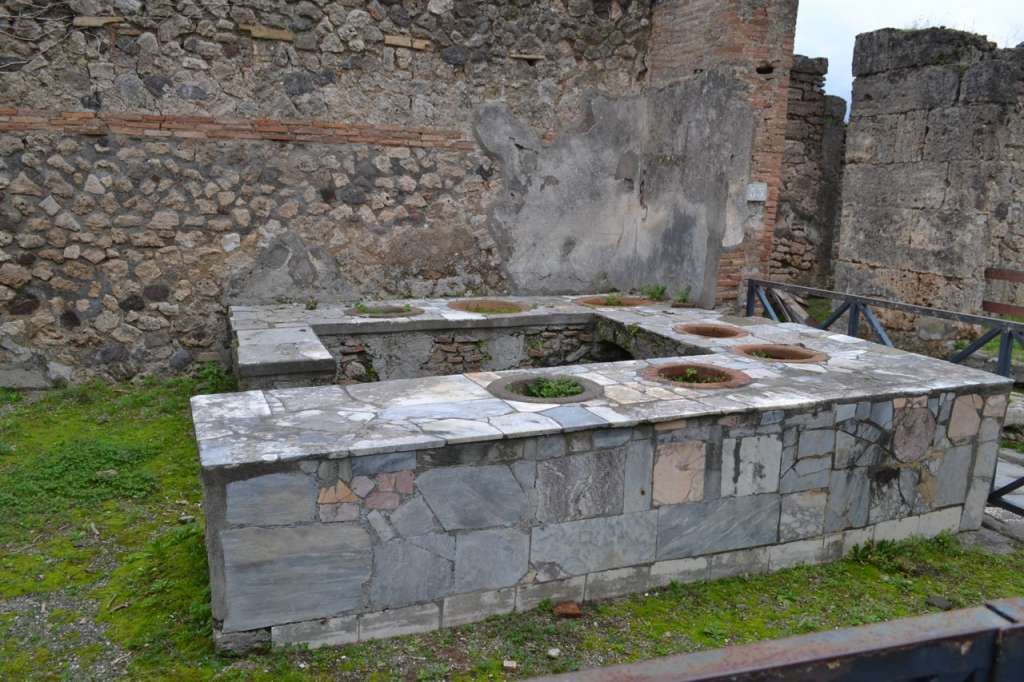 The remnants of one of many “fast food restaurants” throughout Pompeii, called a Thermopolium. 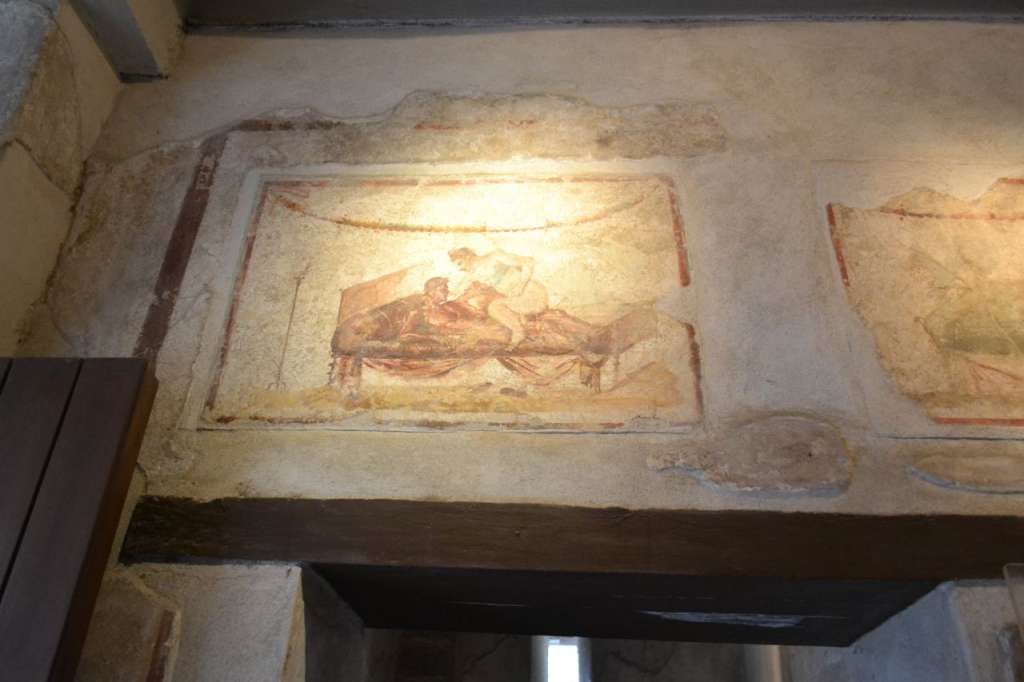 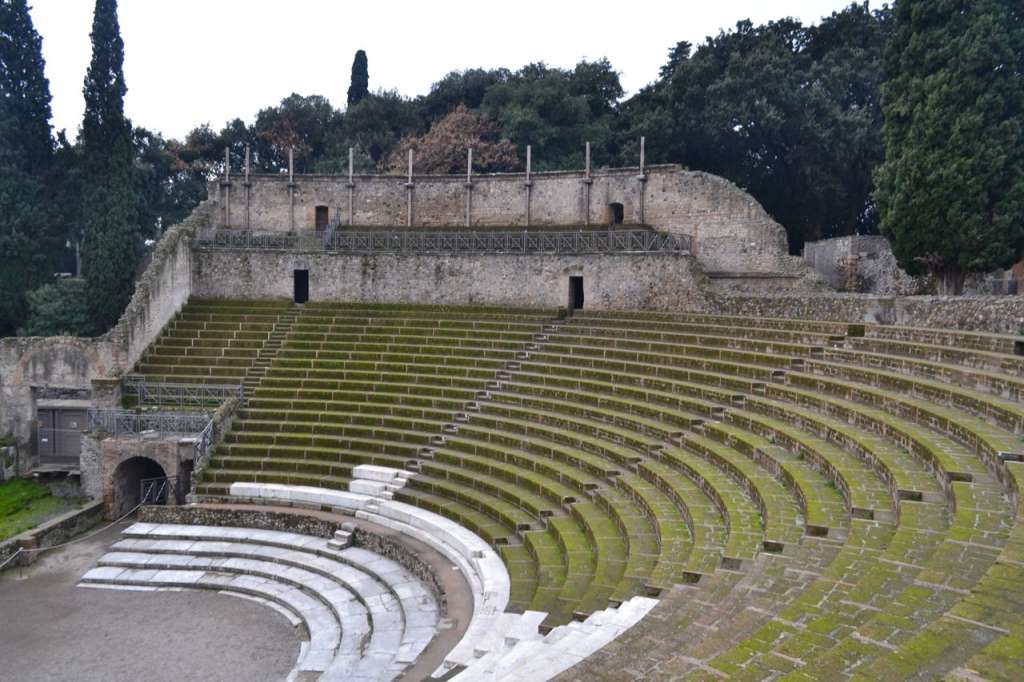 After that, we continued onward on our own, using the detailed map available for free from the ticket window and making sure to hit the one site I just had to visit: the anfiteatro, or amphitheater. 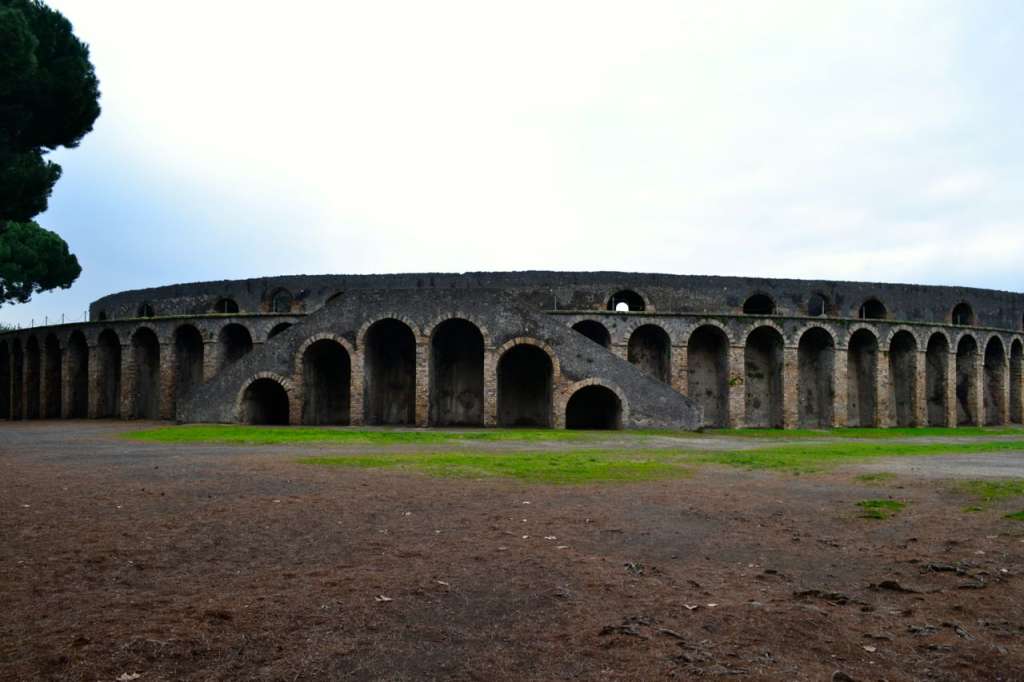 Many visitors skip the amphitheater as it’s at the very end of the excavation site—certainly none of those 2-hour tour groups go there. But as a Pink Floyd fan I absolutely couldn’t miss it. I can’t count the number of times I’ve watched their Live at Pompeii film, recorded in the amphitheater in 1971. Just walking up to the site I started to get the shivers. Once inside, I could just re-imagine the sights and sounds of that incredible concert, along with imagining gladiator battles of times long past. A fan geek moment? Absolutely. But so, so worth it, and honestly I can’t imagine going to Pompeii and not seeing this incredible site. 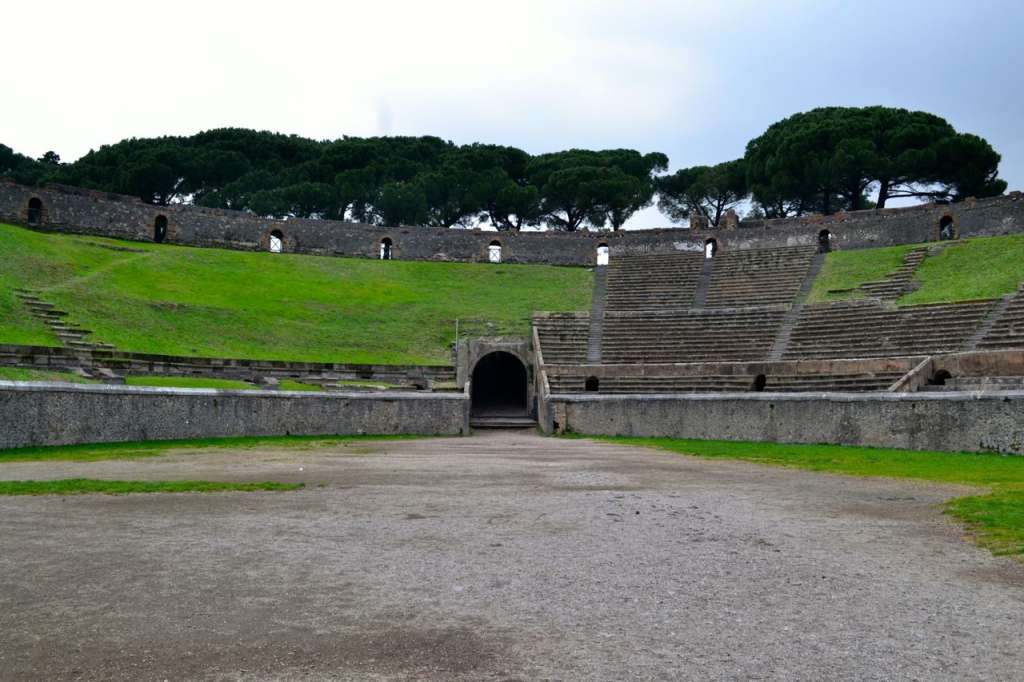 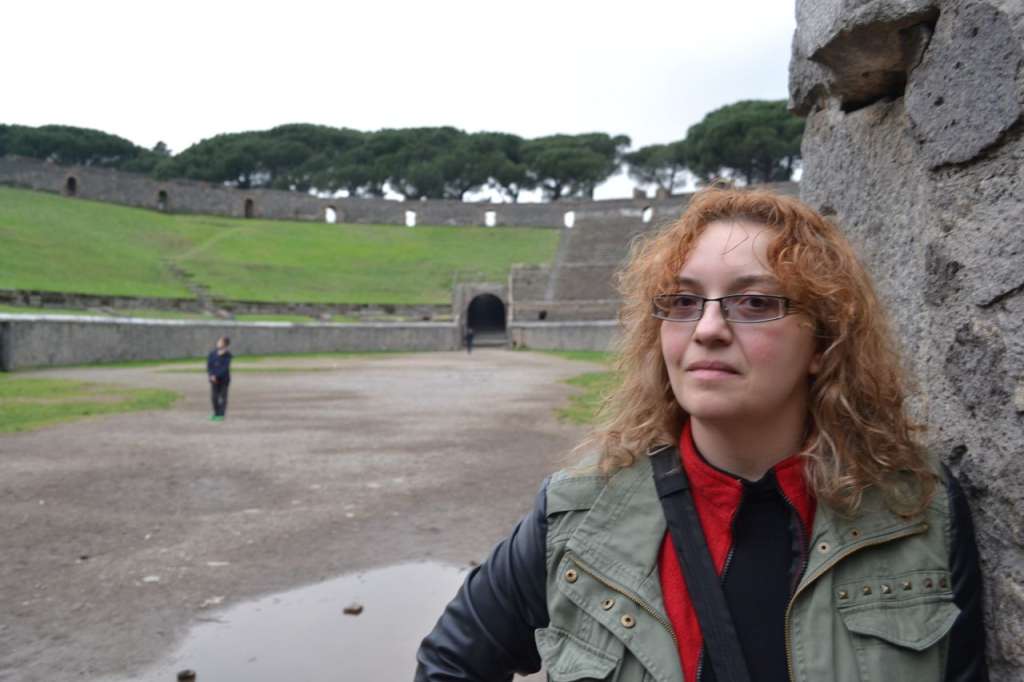 It’s only about an extra 15 minute walk from the more popular ruins, and you’ll see much more including re-created vineyards and some of the better-preserved villas of Pompeii along the way. 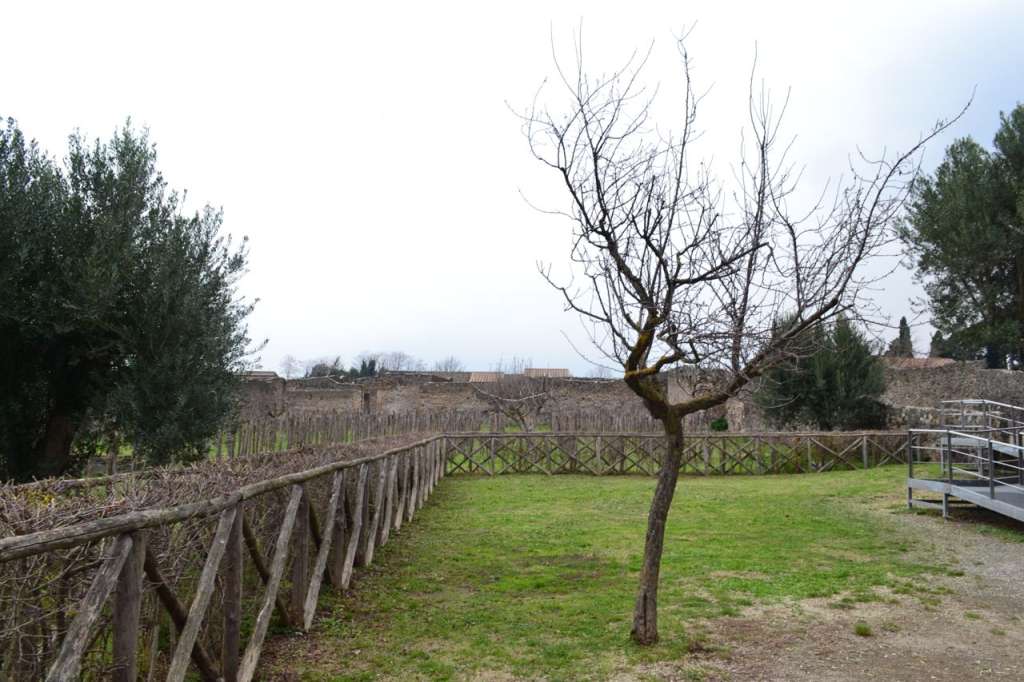 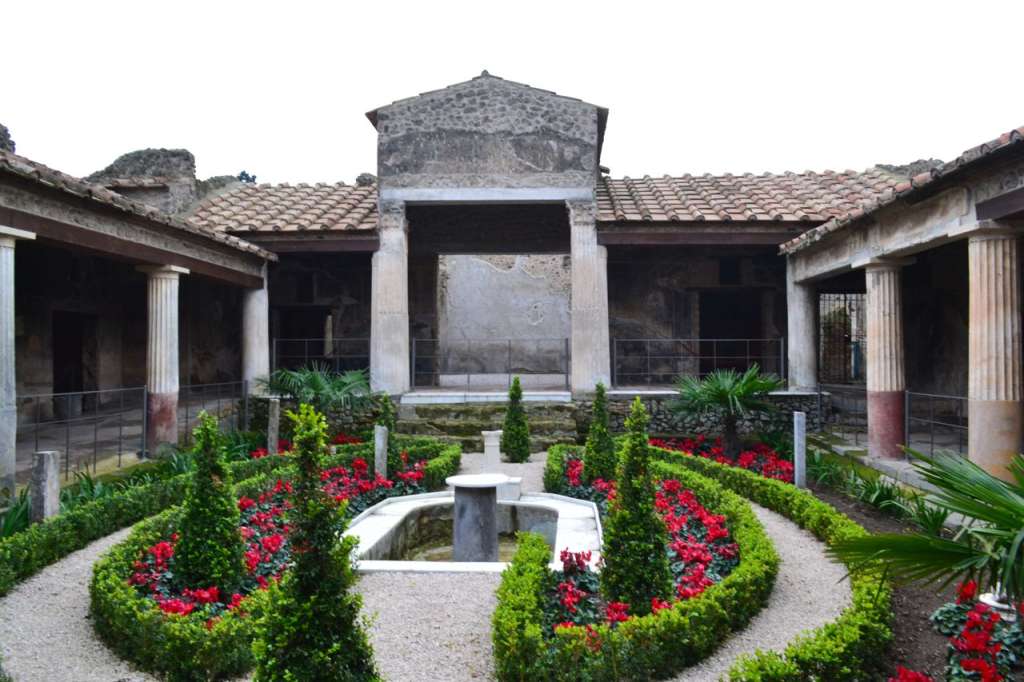 Taking the extra trip also takes you past one of the most haunting sites: a vineyard where some of the dead were found, the castings made from the airpockets left by their decomposed bodies. In the silence of the empty place, with Vesuvius still looming in the background, one begins to feel a great weight of one’s own mortality and how fragile life really is. 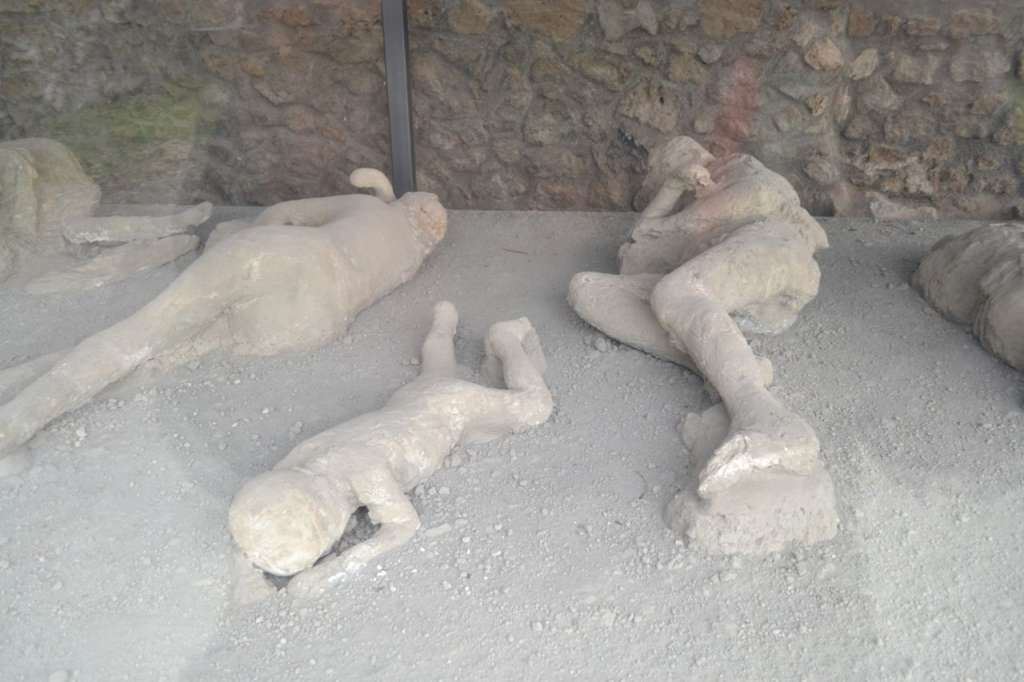 Many may only spend 2 or 3 hours at Pompeii; we spent easily 5-6 hours there, only leaving at about quarter of five as in the winter the site itself closes at 5:30. It’s really most magical to visit the site in the late afternoon, once the large tour groups have all departed. We headed back to the train station and just waited in quiet reflection until the next train back to Naples arrived.

We had only had a light lunch—paninis from the Pompeii “Auto-Grill” just off the Forum—so by the time we got back to Napoli we were definitely ready for a good dinner. After a couple days of pizza, I thought it might be nice to head back to Borgo Marinari and try one of the other seafood restaurants there. So we took a taxi directly from the train station, and spent a little while just walking about and evaluating our options. One restaurant I had looked up which had very good reviews was Zi Teresa, right at the beginning of the pier. It was only just 7pm, but the lights were on and the doors were open…could we come in? Absolutely, we were greeted, and lead to a table in their covered patio area. 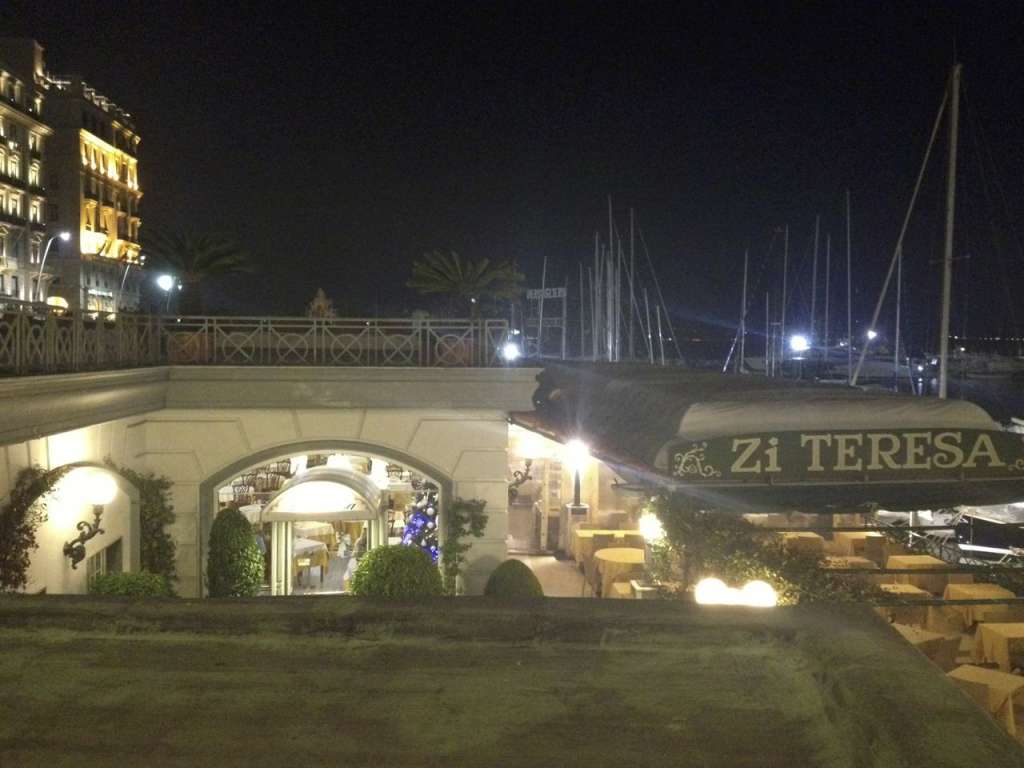 Zi Teresa is huge. It’s a lovely restaurant, right on the boat dock, and I can imagine it’s incredibly popular in season. We were the first diners of the evening and indeed, our waiter excused himself after bringing us menus and water—he had to change into his formal dinner service attire. But that was all right as the menu was quite extensive and featured a long list of seafood-focused specialties. We debated for quite a while what to order, wanting to sample as much as we could without over-ordering. 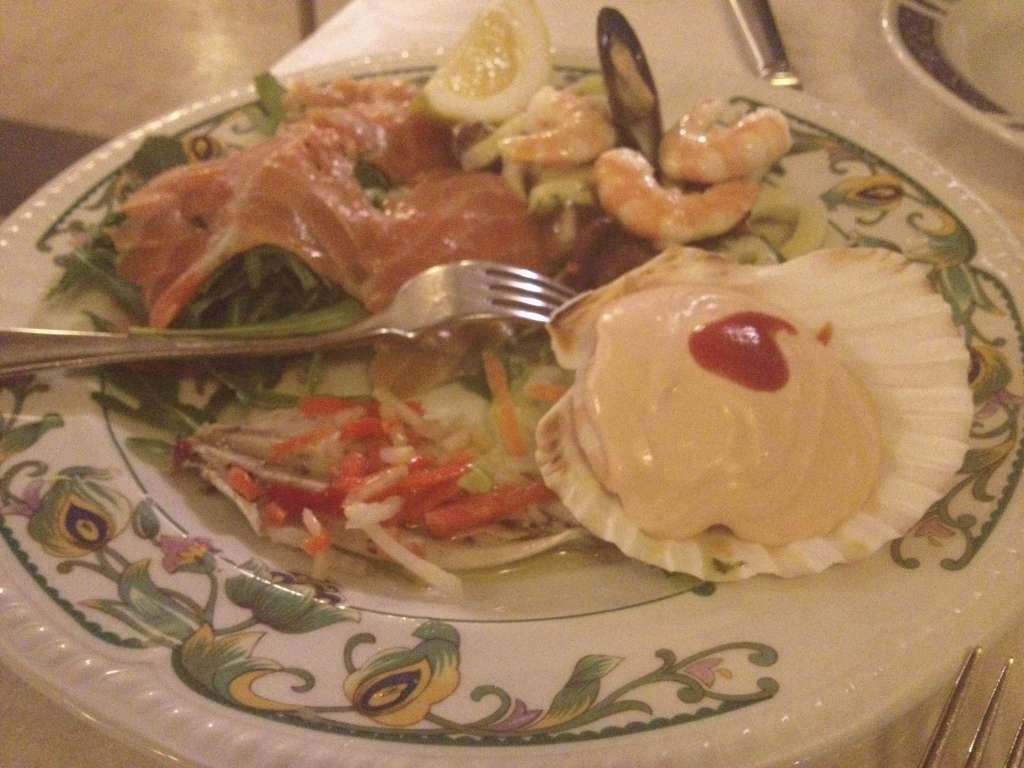 We ended up deciding on sharing one antipasti plate, two pastas, and one secondi. To start we ordered their house seafood antipasti sampler which was outstanding. It featured salmon carpaccio, marinated shrimp and mussels, marinated anchovies over pickled vegetables, and a scallop mousse. With their excellent house bread it was a wonderfully light and refreshing plate to share, beautifully presented as well. (The mousse was definitely the best part!)

For a pasta, I chose a simple yet delicious clams and mussels over house-made scialatielli. This was light and very fresh tasting, and the pasta portion perfect. Sweetie ordered the fusilli “alla Nerano” with zucchini blossoms and mussels, served with a cheese crisp. This was wonderful, too—even if the plating strangely made it look like an evil tentacle monster (Cthulhu, is that you?) 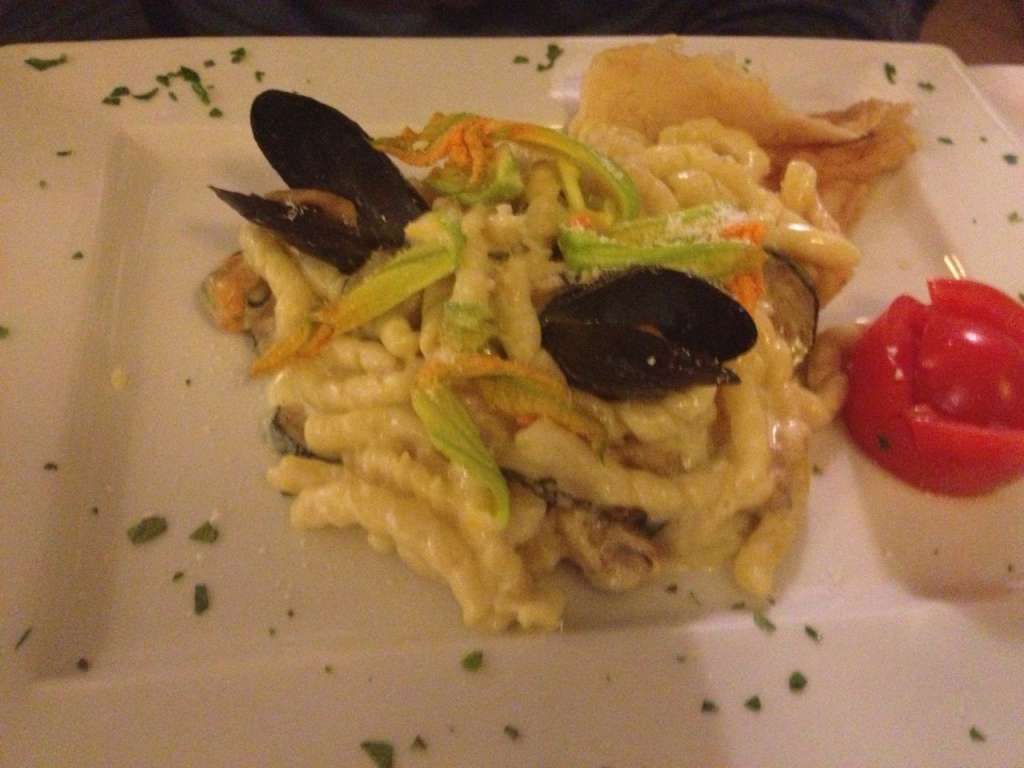 Fusilli with mussels and zucchini flowers

For our shared secondi we went for the mixed seafood grill. This was another excellent plate, and just enough for us to share. The calamari was especially tasty and tender. 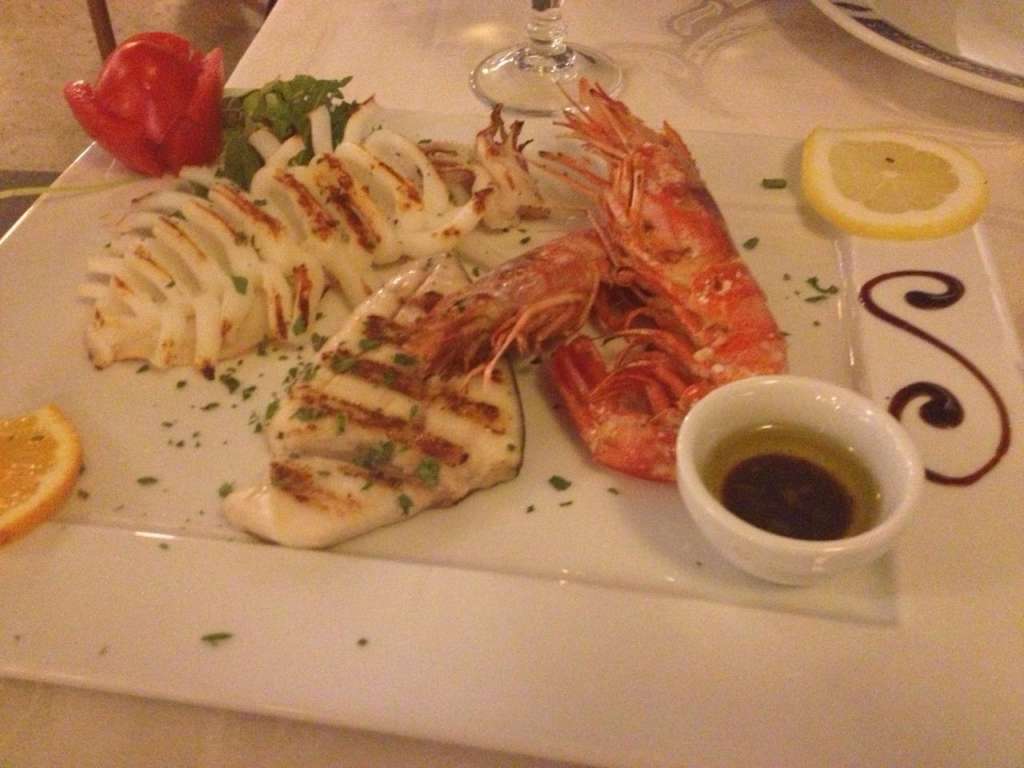 We did each have room for dessert, thankfully so! There was a nice selection available in their dessert case to choose from; sweetie went for another baba cake, I went for the crostata di fragole …yum! As much as I’m not always a big dessert person, this was well worth the indulgence. 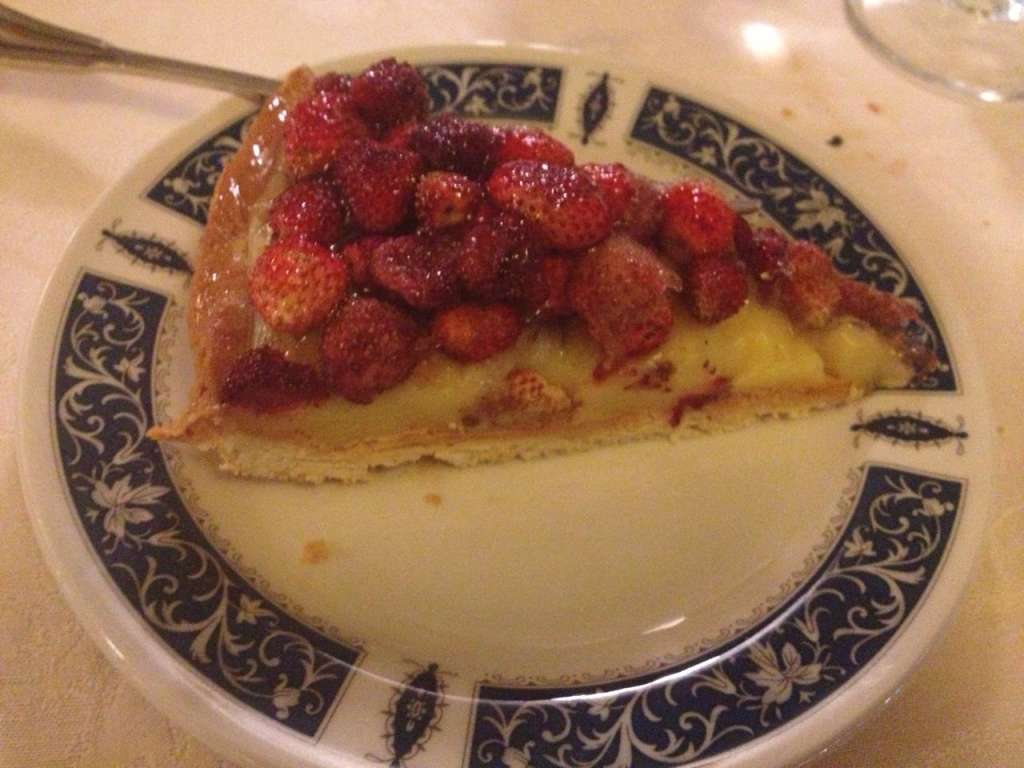 All in all this was definitely one of our favorite meals in Naples. We would have gone back a second time, I think, if we’d had time on the trip as the menu was so extensive and it had been difficult to decide what to order, everything sounded good. The service was very refined yet not stuffy, the atmosphere lovely, and the food delicious from start to finish. The total check was 85 Euro, also we thought reasonable for the food, a bottle of wine, and finishing espressos.

(As a final note, if you’re a geek for ruins like I am you can see all my copious unedited photos from Pompeii on Flickr.)