After our long day previously on Capri, we happily slept in the next morning and decided (for us at least) to take things easy. That meant more churches and chapels, of which Naples is in no shortage! There were several major ones we had not visited yet, so we planned to tackle what we could that was still in the historic part of town, which we were beginning to find familiar and comfortable despite its noisy, crowded streets (and vespas ready to run you down if you weren’t paying attention.)

The first for us would be San Lorenzo Maggiore, which is just off  “Christmas Alley”, near Via San Gregorio Armeno. We’d stopped in the church previously, but had not explored the rest of the complex which requires ticketed entry: an archeological museum, a monastery and large frescoed hall, and most notably an ancient Roman market which is excavated and open for public visit, right beneath the church. It is the only “large scale” Greek-Roman site excavated in the heart of Naples, but by this point we were really beginning to get a sense of how the city is just layers upon layers of history, one empire building upon the ruins of the next. 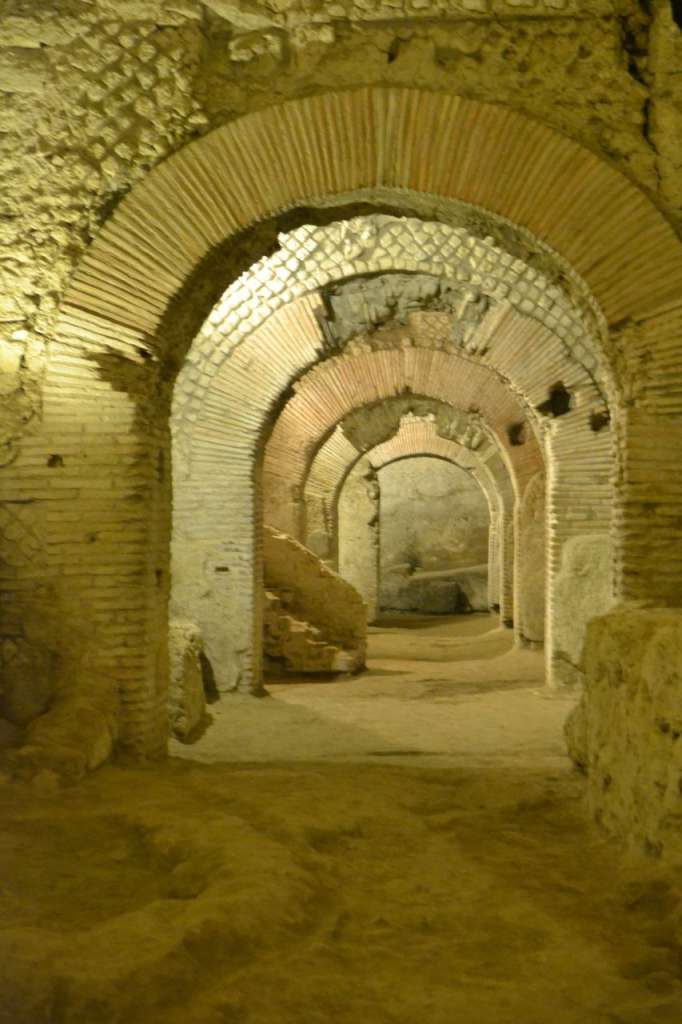 After San Lorenzo, we headed back to one church which we had been waiting to visit for days: Santa Maria delle Anime del Purgatorio ad Arco, one of the most curious in all of historic Naples. The main floor of the church seems quite ordinary—save the bronze skulls outside which passers-by rub for good luck (or tempt fate like the sweetie here): 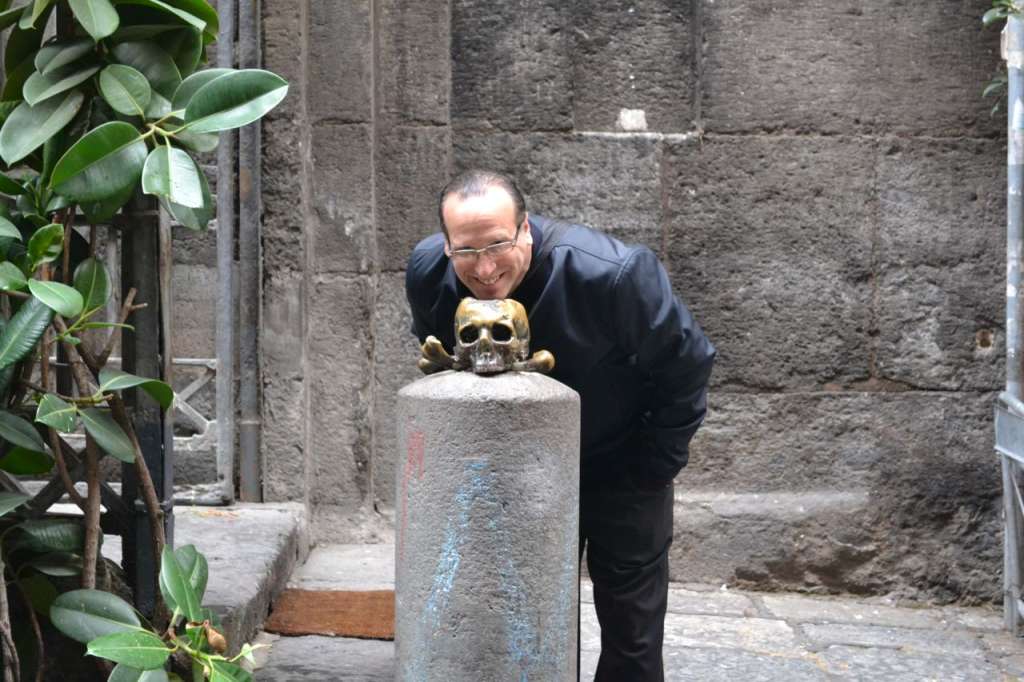 Downstairs, however, there is a “lower church” which served as the center for an (unsanctioned) Neapolitan cult of the dead. Bones from paupers’ burials were interred here, their skulls adopted and cared for by parishioners. By praying to and for these skulls, displayed in decorated boxes, the souls of the departed were supposed to grant favors and provide support for their caretakers.

Getting access to the lower church—at least on regular days and opening hours—is only through a guided tour offered several times a day. The tour guide kept seeming reticent to sell us tickets, insisting that the tour would “likely” only be in Italian but we didn’t care. We just wanted to see the skulls. Interestingly enough the only other two people on our 11:45 tour were also Americans so the tour ended up being in English anyway. The guide seemed eager to rush us through things instead of allowing us to linger and really see the skull boxes (I wish I could remember the Neapolitan phrase for them) up close. Still, it was definitely worth doing, although it felt like a relief afterward to come back outside and get a fresh breath of air!

Next? The “Majolica Cloister” of Santa Chiara, a beautiful space where the courtyard is decorated in colorful, floral-patterned majolica tiles. It seems a bit lively for a quiet cloister, perhaps, but is a surprise delight to come across in the heart of gritty Naples. 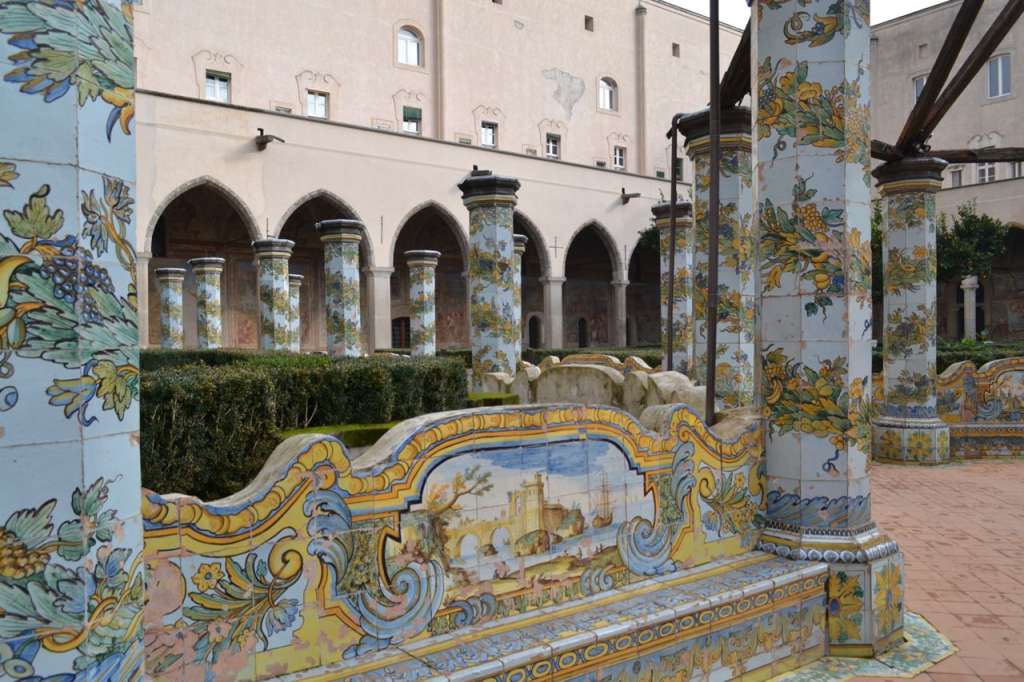 It was getting on past lunchtime but there was one more church we had to get to first, since we knew we were close and it had been a little difficult to find: Capella Sansevero, home of the famous Veiled Christ sculpture and other remarkable works of art—and science! This is one of the most curious and unique family chapels I have ever seen; the architecture and decoration is laden with Masonic symbolism, and in the basement there are two really bizarre anatomical models, supposedly made with an early form of plastination. Freaky. But the artwork here is seriously beautiful and this is a place to definitely see while in Naples.

Okay, so now it was definitely lunch time. Once again we were craving a good pizza and a place I’d seen that looked promising was Lomdardi a Santa Chiara. The downstairs area is dominated by their pizza oven, front and center, with just a few tables for seating: the main dining room is upstairs. They offer regular pasta and antipasti offerings as well as a variety of pizzas, most only around 5-6 Euros a pie. I had to try a unique-sounding white pie that was topped with olives, anchovies, capers and escarole. Sweetie went with a classic Margherita.

Our pizzas came very quick and oh my, they were delicious. So far these were definitely the best pies we’d enjoyed in Naples, with a wonderful airy crust, delicious fresh toppings, and HUGE. These pizzas literally did not fit on the dinner plates. 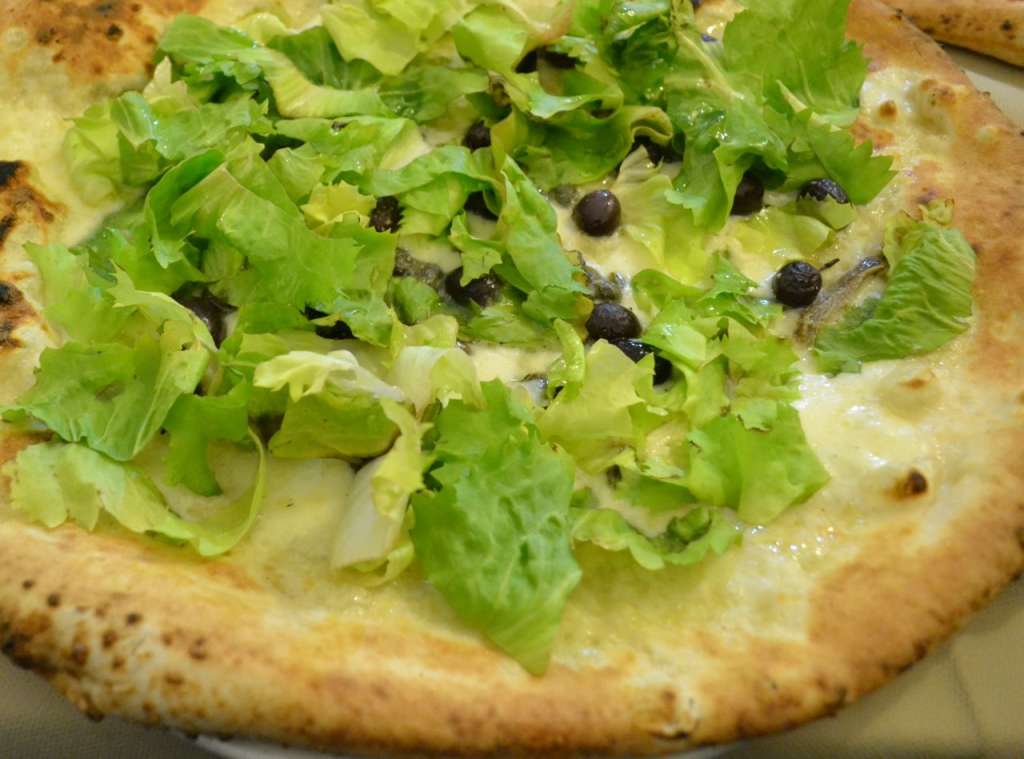 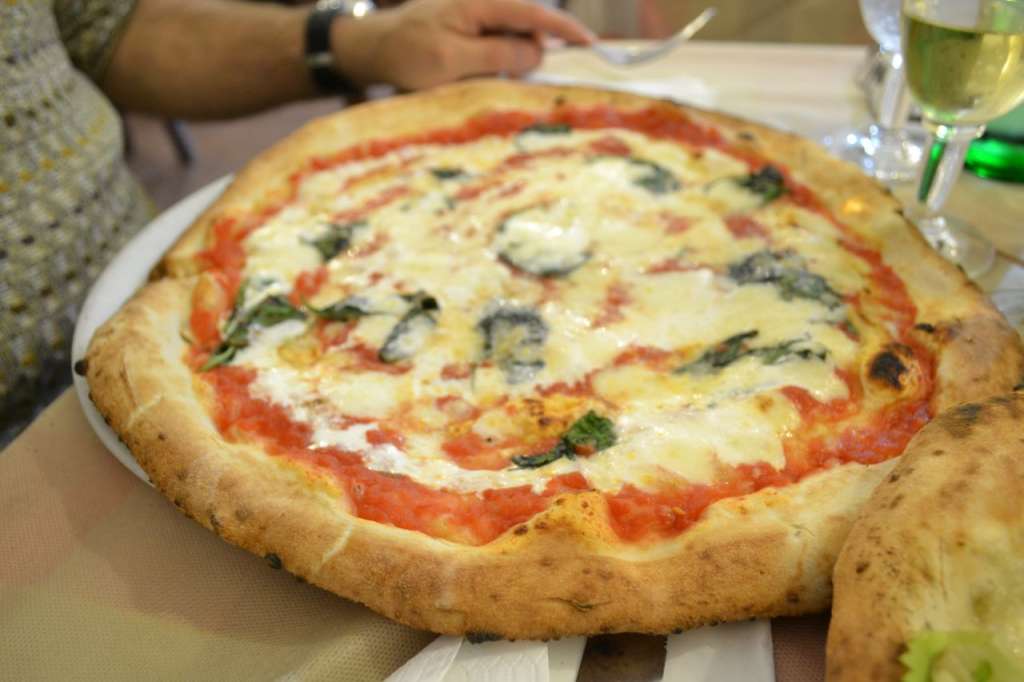 Seriously, this place was a great find and we loved it. In fact we loved it so much that we’d end up having one of our last meals in Naples here later in the trip—the only restaurant we went to twice!

After pies like that and a busy morning, we needed a little rest and recuperation time, so we headed back to our apartment for a time to recuperate (and put away a little leftover pizza). We took things fairly easy for the rest of the day, going for a leisurely stroll down Via Toledo in the late afternoon/early evening. This is one of the main shopping streets in Naples, so we poked along checking out a few art and book stores, one or two lesser churches that were open, and then eventually stopping for a drink at Les Chicquot Lounge Bar, a nice cafe on Piazza Carità. The drinks were excellent and they were very generous with providing plenty of bar “snacks”—which we seriously didn’t need after those humongous pizzas! 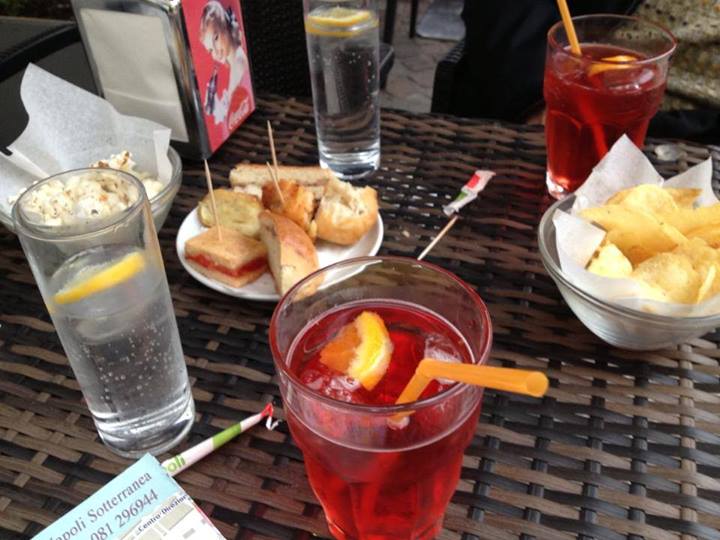 It was a great spot to just sit and chill for an hour or two, watching the evening street activity and feeling more and more relaxed and at home in this city. Why does Naples have such a bad rap, we were starting to wonder? We’d encountered no problems at all, save a few pushy beggars and peddlers, but that’s to be expected almost everywhere in Italy. Many tour guides suggest only spending a day or two at most in Naples, and being extremely careful while doing so, but we didn’t know how we were going to fit everything we wanted to see into the time we had left.

After checking out a few more churches on a slow walk home, we ended up calling it a very early evening. The next day was going to be a busy one and I wanted to be well-rested for it. We would finally be visiting somewhere I’d been wanting to see for years, if not decades: the ruins of Pompeii!

This entry was posted in Italy and tagged italy 2014, Lomdardi a Santa Chiara, naples, pizza, restaurant review. Bookmark the permalink.