The island of Capri has been a resort destination since the times of the Roman Empire. Today, it is largely a home for the rich-and-famous and tourists who want to dream of brushing shoulders with them. Off season, in winter, Capri is not quite a ghost town but it is a calm and pleasant time to visit, if your interest is more in scenery and history than “being seen” and shopping in fancy boutiques.

Getting to Capri from Naples is quite easy; there are regular ferries and hydrofoils leaving year-round (check the daily schedule here). Pick your time, and head to the appropriate dock, and it’s an easy ride. In season, you’d do well to buy your return ticket in advance as well as boats can fill up, but that isn’t really something you need to worry about in the middle of winter like when we were visiting! 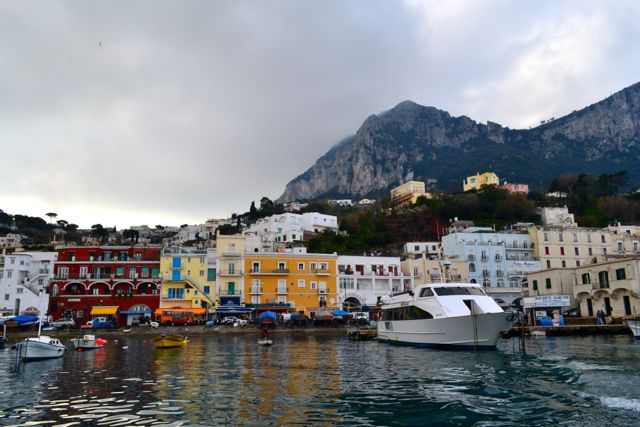 Arriving at the harbor of Capri.

We made it to the hydrofoil dock in time to catch a 9:30 boat that got us to Capri in about an hour’s time. The day was a little overcast and chilly, so there were not a lot of other tourists there—great for us as the first thing we wanted to do was visit the Blue Grotto. Sweetie had done this years and years before, in season where you can spend hours first waiting for a boat to get you there, and then more hours in chaos waiting for a 3-seater boat to fit you through the tiny grotto opening (after paying an arm and a leg for the 5-minute experience). Again, we were lucky that we got tickets for a boat leaving for the grotto in no time, and were there very quickly. The ride itself was pleasant if cold, hugging the rugged coastline of the island. 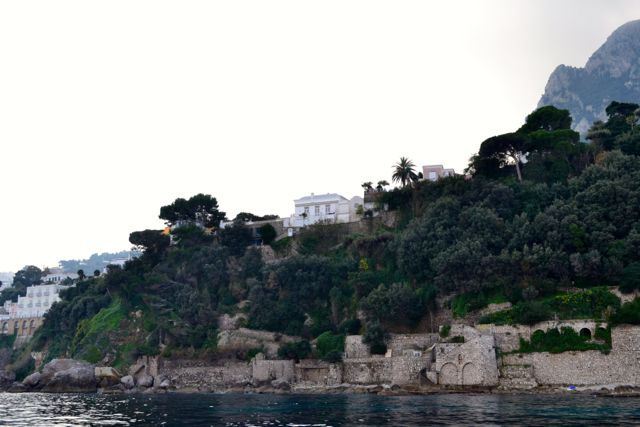 Here is a good YouTube video of what you can expect if you want to see the Blue Grotto (complete with your boat captain serenading you once inside.) It is kind of cool, but I almost think it’s one of those things you do just to say you’ve done it more than anything else. 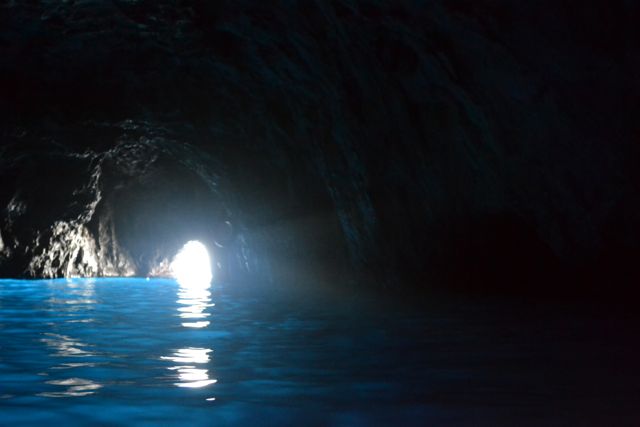 The best shot I got of what it was like inside. If it had been less overcast the blue would have been more brilliant.

We were back at the harbor by a little before noon, at which point we needed a little espresso to warm up and a light snack to decide what to do next (fair warning: the good but touristy bars here will charge you triple per drink if you sit instead of stand!)

We had wanted to take the scenic chairlift up from the harbor to the town of Capri, but that was closed for winter maintenance when we were there. Oh well. We debated waiting for a bus or just grabbing a taxi, and I decided a taxi was our best bet if we wanted to maximize our time on the island. Originally we were planning on heading to Capri town and then walking to the ruins of Villa Jovis, but our driver cautioned that it was at least a 45 minute-1 hour hike from Capri town to that site. He suggested the town of Anacapri was a better destination with Villa San Michele easy to visit, so that’s what we decided upon. 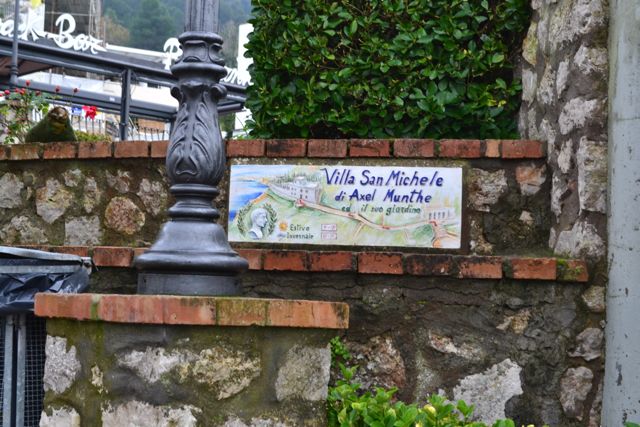 Anacapri is a lovely quaint town, set up high on the hilly terrain of Capri and not quite completely shut down for the winter. We decided to head toward San Michele first off, walking along a now-quiet street lined by mostly-closed touristy shops. But the few shops that were open benefited from our business quite well; we bought some limoncello and other goodies at Limoncello di Capri, and then in shop named Il Veliero I found a magnificent ceramic serving platter which I just had to buy and have shipped home. It’s not often I see something so extravagant and I just have to buy it right away, no questions asked, but this was just perfect for my tastes and color preferences. I loved the dark blue background and bright yellow lemons to remind me of the Amalfi region. It’ll be perfect for our next big holiday party! 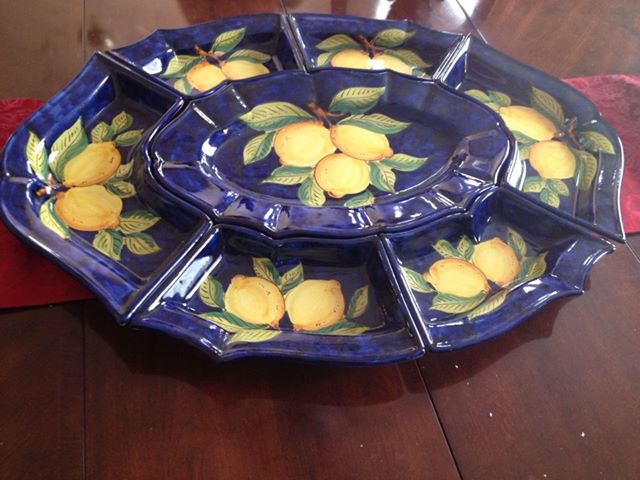 Villa San Michele is a lovely estate, built upon the ruins of a villa used by the Roman Emperor Tiberius. As such there are pieces of ruins and sculpture throughout the home and its wonderful gardens, which offer stunning views of the harbor of Capri below. Although it was a bit overcast, we were still able to appreciate the view and beauty of the island, and the gardens were charming even in wintertime. Swedish physician Axel Munthe wrote The Story of San Michele telling of how he came to Capri and ended up building the villa, some of the famous and less-than-famous who came to visit, and also about the beloved animals he cared for. The book is now on my to-read list as I want to learn more about this curious and beautiful place. 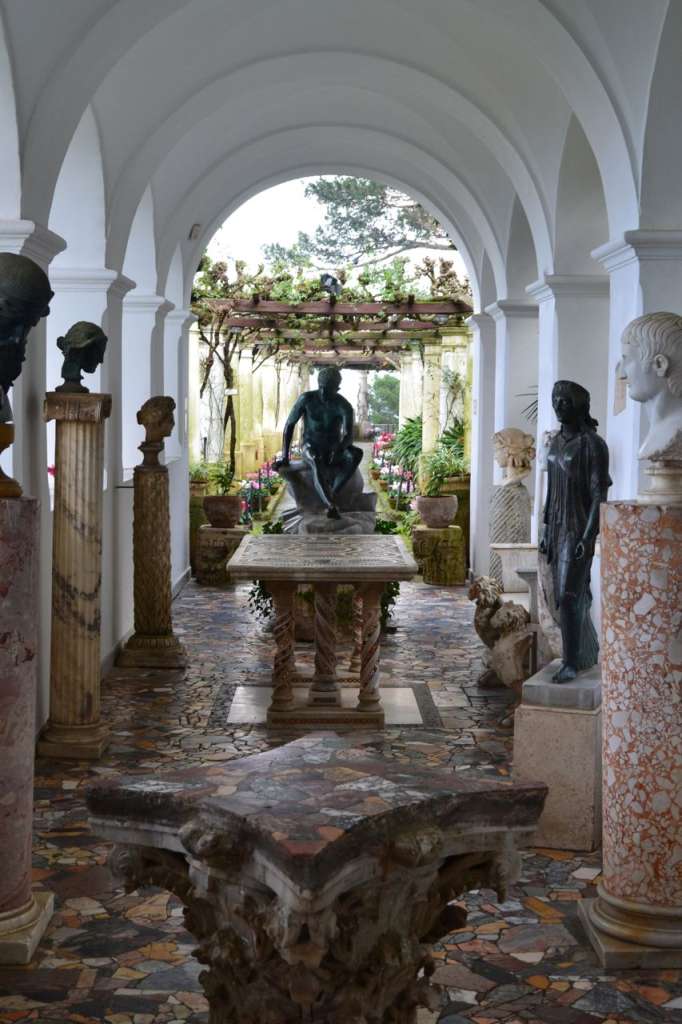 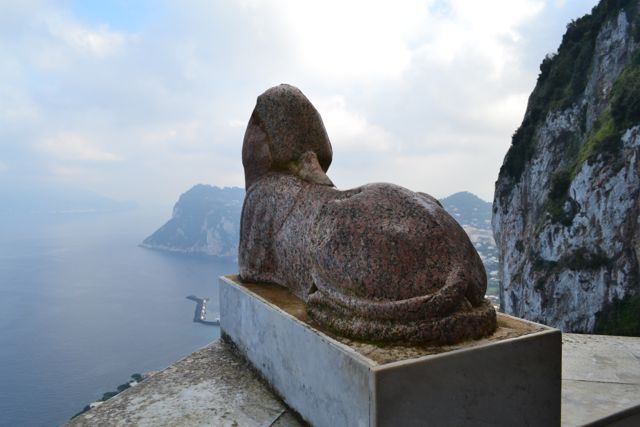 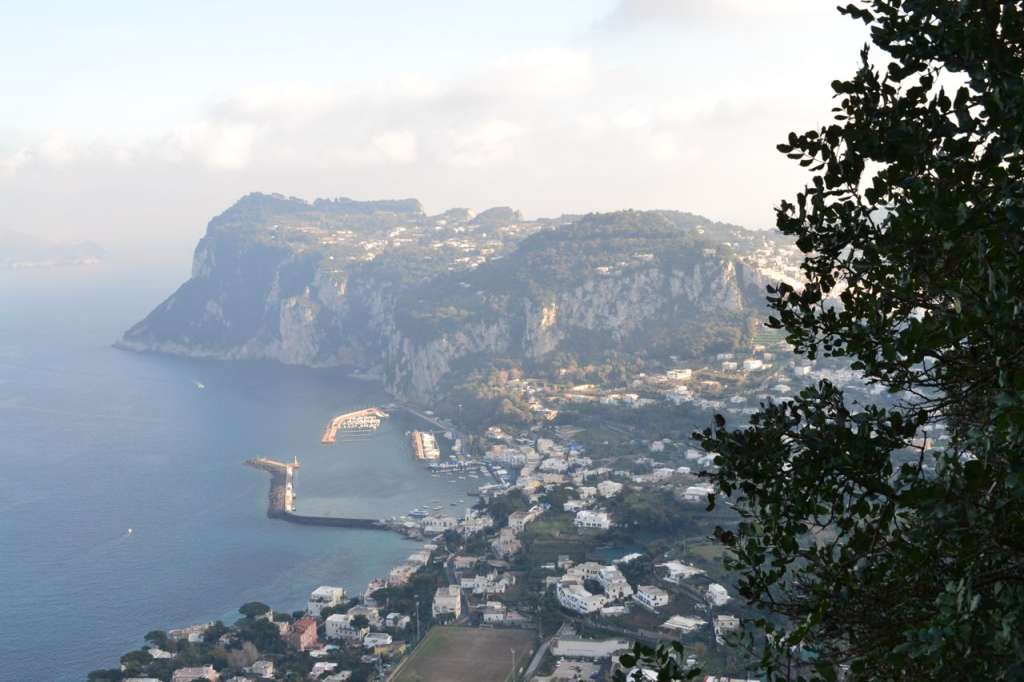 After spending about an hour at the Villa, we walked back to the heart of Anacapri to decide what to do next. It was getting late for lunchtime, and there weren’t many restaurants that seemed to be open—in fact the only one we spotted as active and operating on this day was Ristorante Barbarossa. Located on the second floor of a corner building, up a short flight of steps, the restaurant offered nice enough views of the city which certainly felt completely deserted that day, save for a few taxi drivers and what appeared to be a few local businessmen out for lunch. 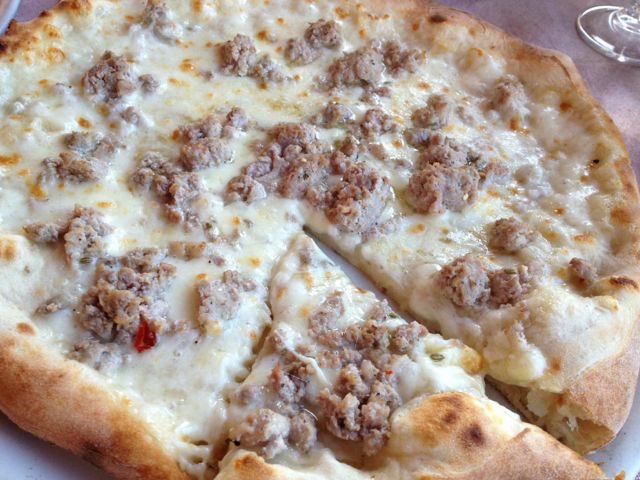 We stuck to the basics: a mixed antipasti plate of mozzarella, arugula and tomato salad, prosciutto; a focaccia della casa with fresh tomatoes and basil; a white pizza with sausage.  I was so hungry at the time, I forgot to take photos except of the sausage pizza! It was all fine enough, but not what I’d call a really memorable meal—and being Capri the prices for everything was at least double what you’d be paying in Naples for the same food.

It was a little after 3pm and we tried to decide what to do next. We had booked a return home on the last hydrofoil of the evening, which would be leaving around 6:30pm. So we decided to just explore the rest of Anacapri for a few hours, window-shopping at some of the mostly closed ceramics and jewelry stores, exploring one open small church, and then finding an artist in his studio who provided wonderful conversation about Capri’s ceramic art history and how he came back to the island after living and working in the States for some time. The backyard of his studio featured incredibly beautiful ceramic work done mostly by his father. 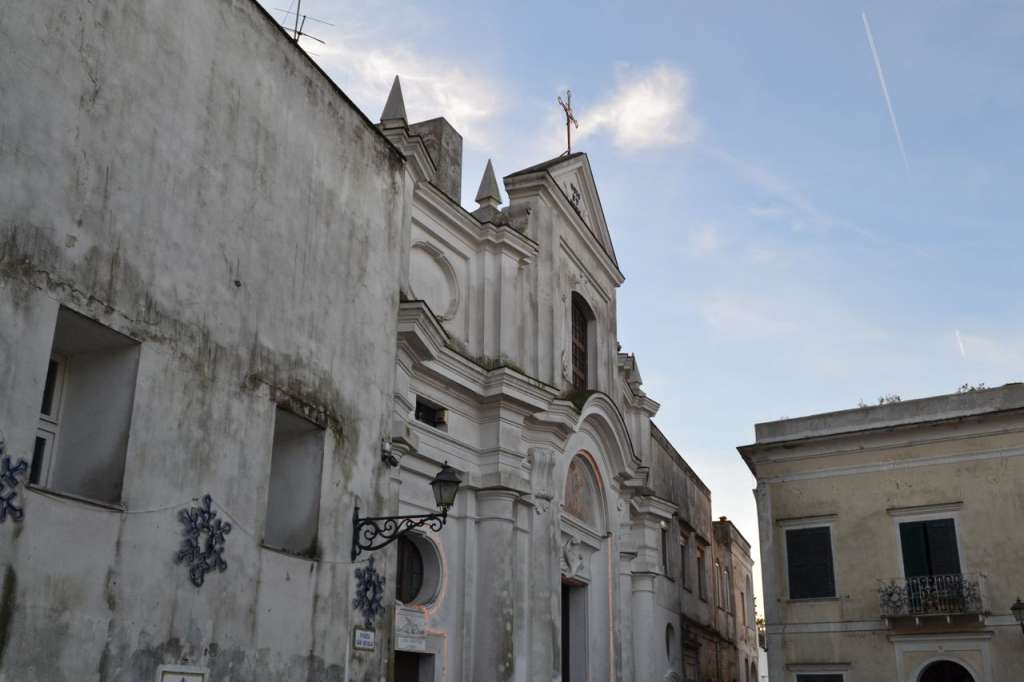 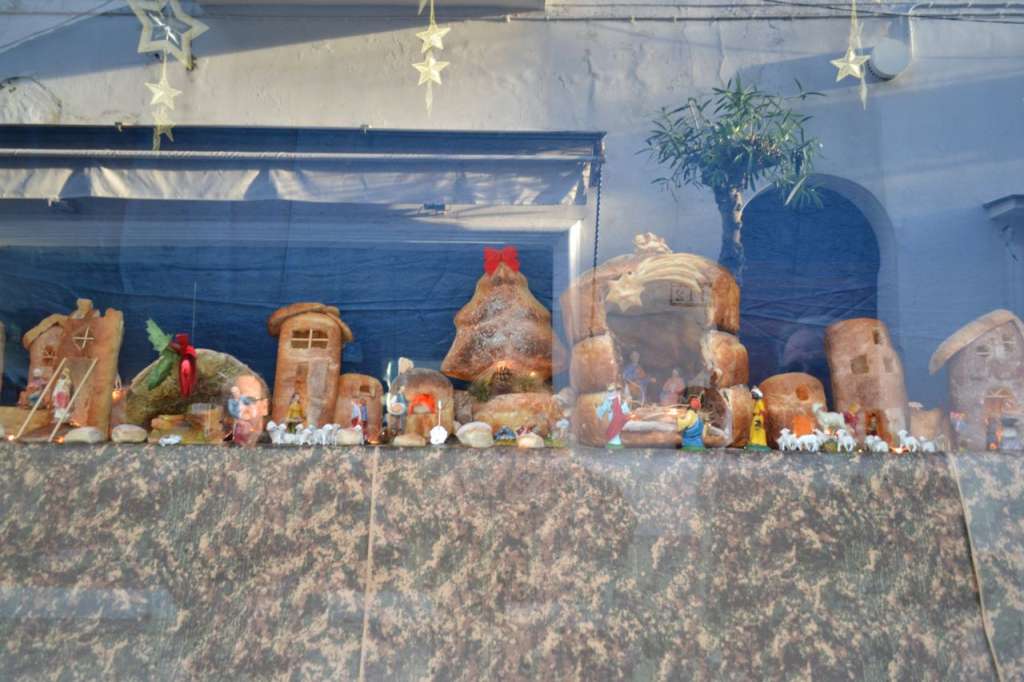 A presepe made of bread in a bakery window. 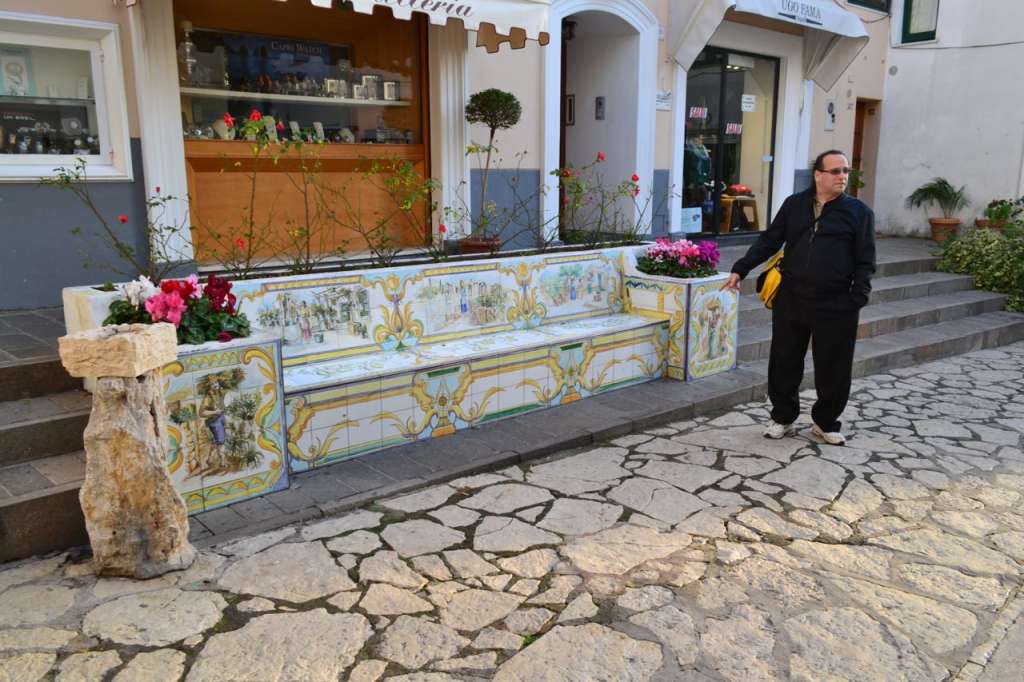 Even the public benches in Anacapri are beautiful.

Eventually we returned to the harbor for our boat, and found ourselves back in Naples by 7:30 fairly tired after the busy day exploring and on the water. Not exactly hungry, either, we just hopped a taxi up to Piazza del Gesù Nuovo, from where we visited a couple more churches before they closed for the night, including Santa Chiara—another victim of Allied bombing in World War II so much of its interior decoration was destroyed.

We finished the evening off with a return visit to Gran Caffè Neapolis for more of their excellent espresso and a round of desserts, all we had room for that night.