January 6. We slept in late, as our train to Naples did not leave until close to 1pm. We also slept in because the sweetie had been up most of the night, trying to follow the Eagles/Saints playoff game on our failing wifi connection (and the less said about that game the better.)

We fueled up on a final breakfast at the hotel before getting a cab to Termini Station. I really enjoy train travel in Italy; the Frecciarosa high speed train is wonderful for travel from Turin down to Salerno, and I had pre-booked my tickets online to save money and also potential hassle dealing with ticket machines in Italy. 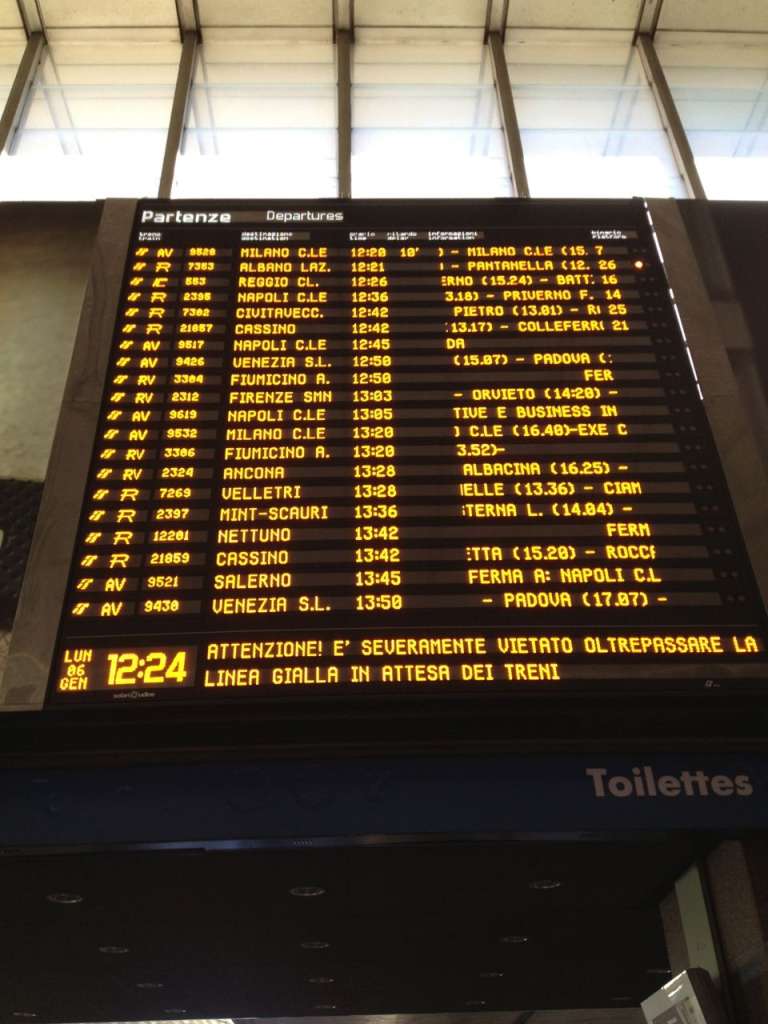 Where do you want to go today?

The trip was a little over an hour, getting us into Naples about 2pm. Now, just about every tour guide and travel book out there will warn you about Naples. They will do everything to convince you not to stay there; to perhaps stay in Sorrento instead as it’s much more “tourist friendly” and “safer”, how there’s not much to see in Naples and that you should only day-trip it at most, if you really feel the need. People looked at us funny when we said we would be spending a week on our vacation based in Naples. Even I was wondering if I had made the right choice, as we piled into our taxi and he tried to find the way to our rental apartment address.

Yes, Naples is dense, gritty, and on the surface, pretty grungy. The first impression I had was a bit of a shock compared to the streets of Rome, Florence, or even Milan. The drivers and scooter riders really are insane, that much our tour books got right. But from that very first cab driver just about everyone we met in Naples was friendly, accommodating and eager to help. He stopped at least 2-3 times to ask other cabbies for directions to our tiny street, and then would not leave us at our apartment building entrance until I had successfully called the rental manager and confirmed we were in the right place. 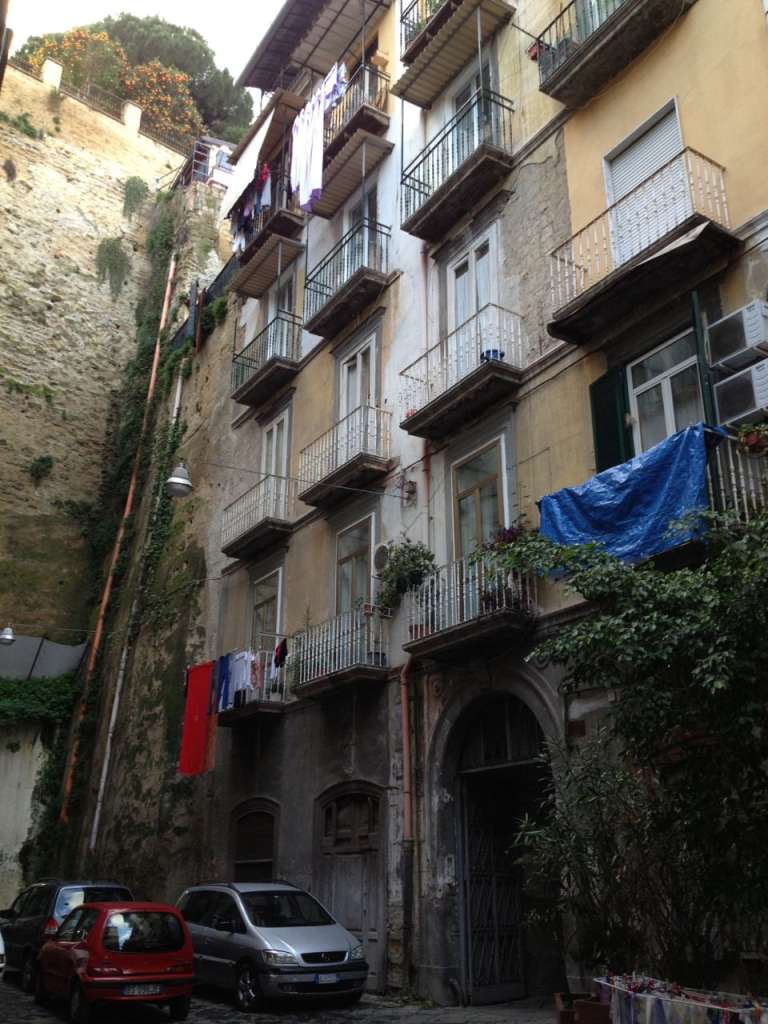 Here‘s the description of the apartment I’d found while doing my searching. I’d used VRBO successfully several times before in Italy, so I was confident based on the reviews and description that this apartment would fit our needs, and that it was quite affordable as well. What I wasn’t prepared for from the description was just how many stairs we would have to climb, up a very gritty and bombed-out looking staircase, to get to the unit.

When we finally managed to get our luggage up the six-floors of stairs (no small feat at all), at least the view that greeted us from the large private balcony was worth it. 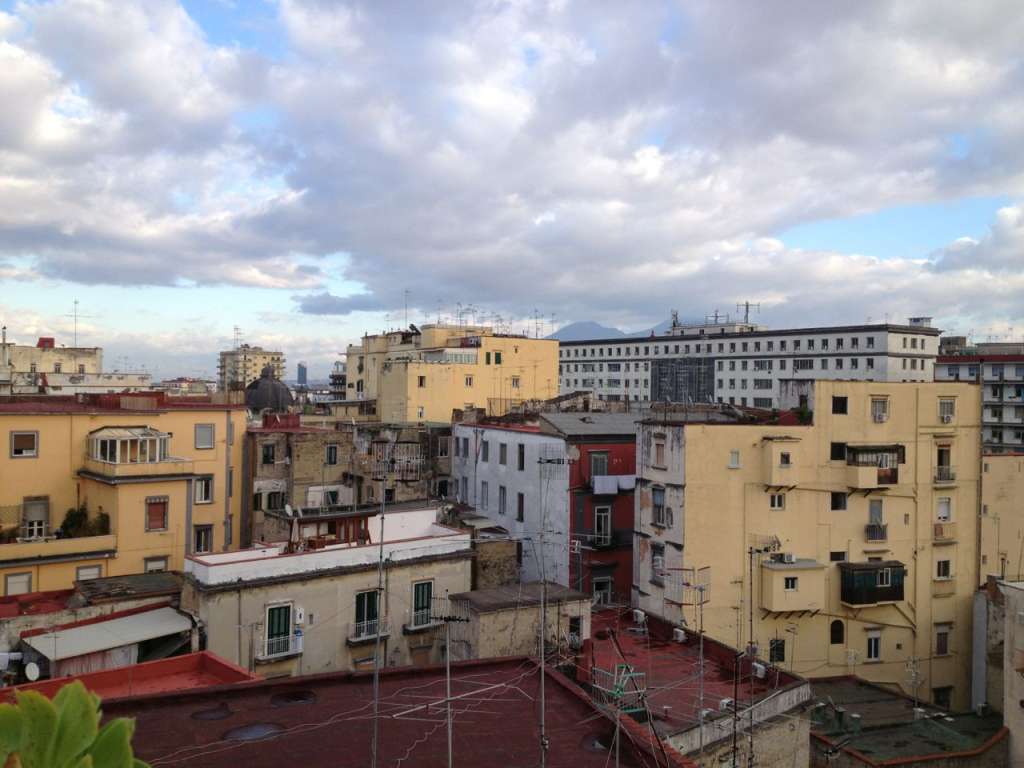 That’s Vesuvius looming in the background, through the clouds.

We settled in, got comfortable, recovered from the climb and then decided to go out and start exploring. Our apartment was located right around the corner from the Naples National Archaeological Museum and yes, the neighborhood was  a bit…funky. We passed quite a few homeless people camped out on (closed) church steps, and especially around the Galleria Principe di Napoli across the street from the museum. The nearby Piazza Bellini was attractive, save for the giant mountains of trash pouring out of several dumpster bins—and right onto some ancient Greek ruins. 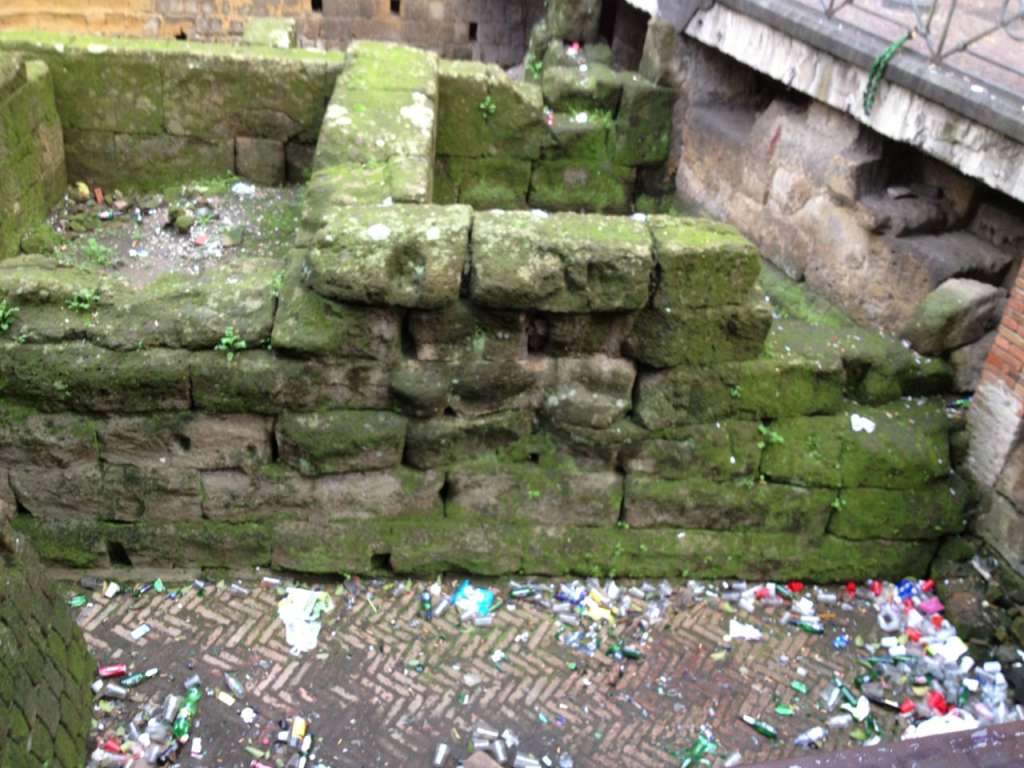 We did, however, find a few churches open to pop our heads into, and also an incredible exhibit of presepe art in a de-consecrated church along Via Tribunali. One thing Naples is very much known for these days is the artistry and creativity in their Nativity crafts. But more on that later…

It was getting on to 4pm and we had not had anything to eat besides train snacks since breakfast. And of course, what is the first thing a person should eat in Naples? Pizza! And in Naples there is no shortage of pizzerias…in fact it is more difficult to find a restaurant that does not have pizza on their menu or as their primary focus. Deciding which one to try was more difficult (indeed, that area of Via Tribunali is known as “Pizza Alley”), but we ended up at a Pizzerie Vesi location due to one factor: the line of locals waiting outside the door for a table.  We weren’t in a rush and yet we were also inside and at a table in the upstairs dining room in about 15 minutes, tops.

The menu of pizza offerings was extensive, yet also inexpensive: a basic Margherita started for no more than 4 or 5 Euros. Sweetie of course went for that classic; I decided to try the D.O.C. Fresh mozzarella di buffala and pomodorini, a pie featuring buffalo mozzarella and sweet fresh “cherry” tomatoes from Vesuvio.

We had a short wait for our pies, during which I was envying the other tables where people had ordered arancini and other fried tidbits to start. I was hungry! But then our pies arrived and oh my. Just feast your eyes: 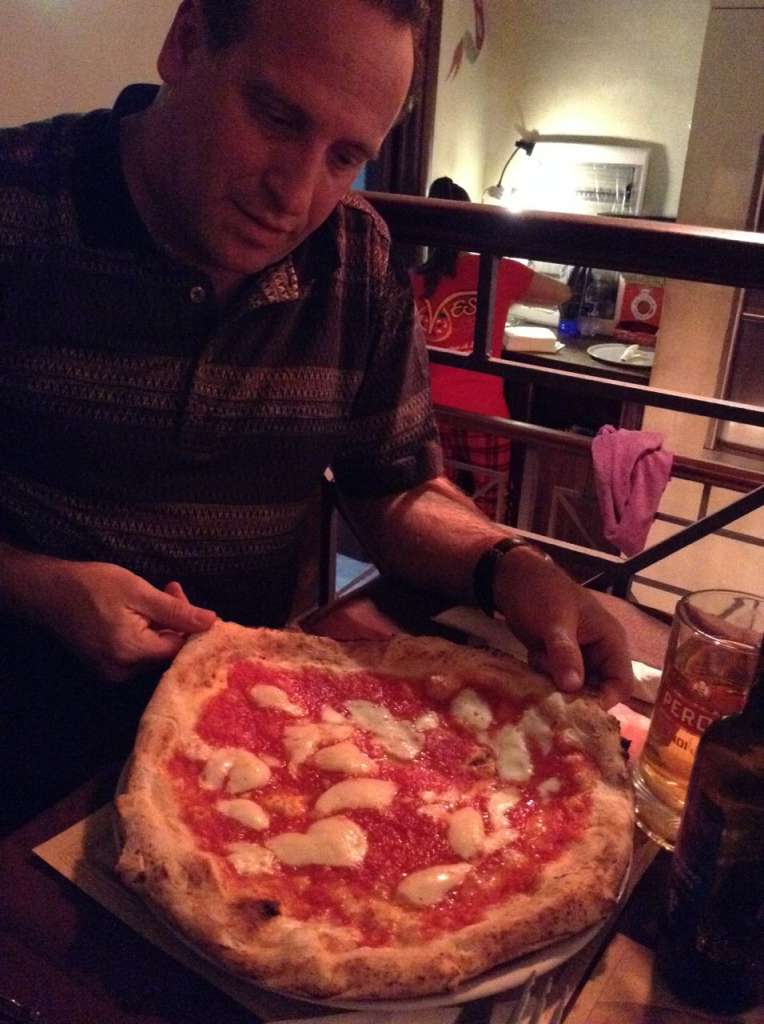 Sweetie and the classic: Pizza Margherita 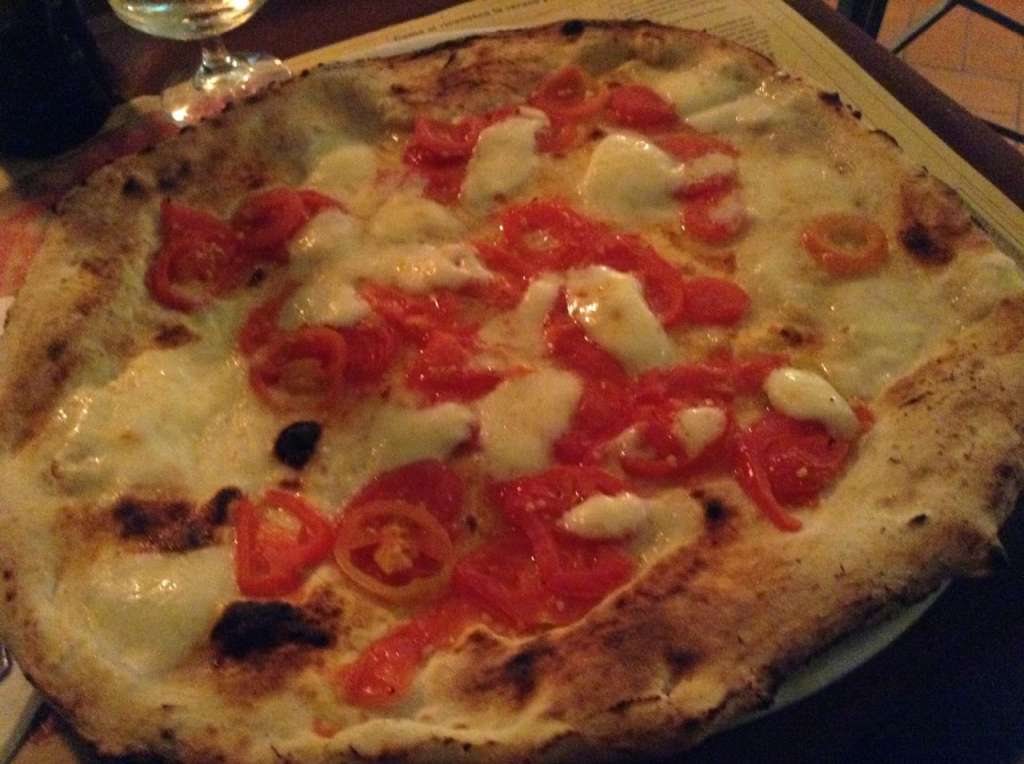 Things worthy of note, besides the surprisingly large size for what are “individual” pies: the light and chewy, airy crust, nicely charred on the edges and underside; the lovely balance of cheese-to-sauce (or tomatoes); the sweetness of those fresh tomatoes on my pie—and I normally am not a fan of our flavorless “cherry tomatoes” at home! The sauce and overall flavor of sweetie’s pie somehow brought back vivid, almost primal memories of the pizza of my youth, at a very old school Italian-American restaurant where I grew up (Mama Brava’s in the Orange County Mall, for any of my old school buddies.) I know, that sounds bizarre, but I swear they must have been off-the-boat Neapolitans there. That old pie is burned into my memory banks and they do say New York Style pizza is really the closest to Neapolitan. After this first taste I really have to agree.

We ate very cheaply with our two pies, one beer and one mini-bottle of wine for me (let me now mention how much I came to love the light dry white wines of Campania while in Naples.)

After finishing our pizzas, we staggered back out onto the streets to continue exploring. There were a few churches now open again for the evening which we poked our heads into, but we were mainly interested in checking out one thing that evening: Via San Gregoria Armeno, also known as Naples’ “Christmas Alley”. It’s an entire small street devoted to nothing but Nativity—or presepe—figures, buildings, set pieces and scenery. In Naples, the presepe is a serious art form. Everything from the sacred to profane is embraced: the most beautiful baby Jesus and Virgin Mary to figurines of the hottest current football players, Italian politicians, butchers, barbers, fisherman, seamstresses and more. 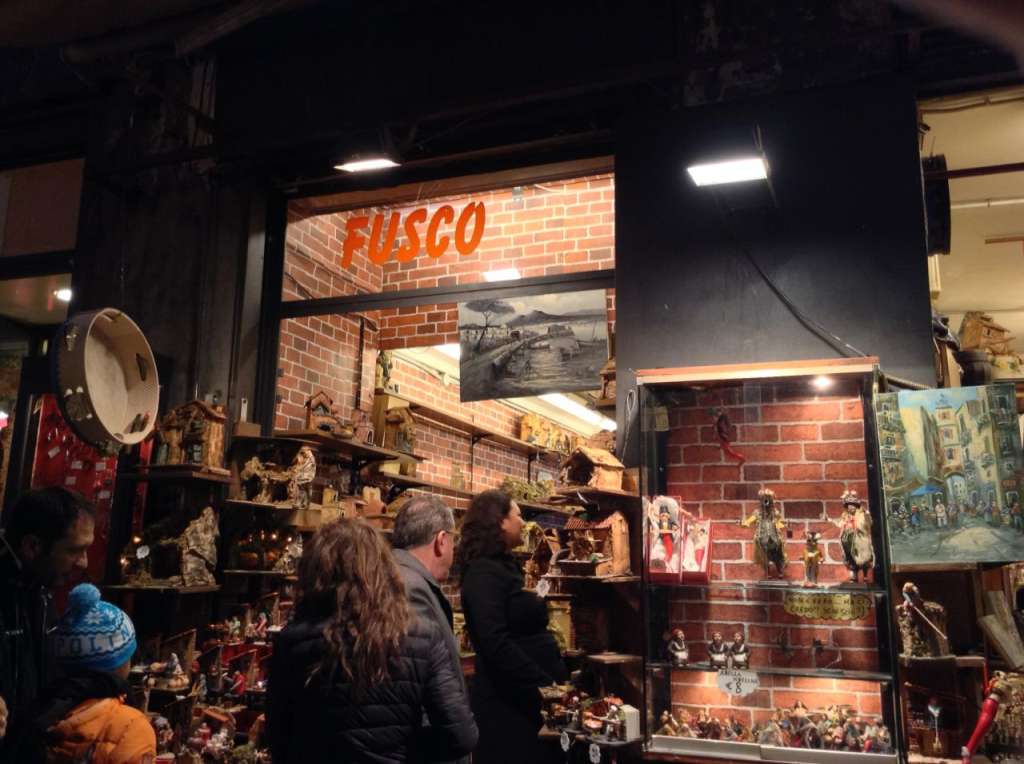 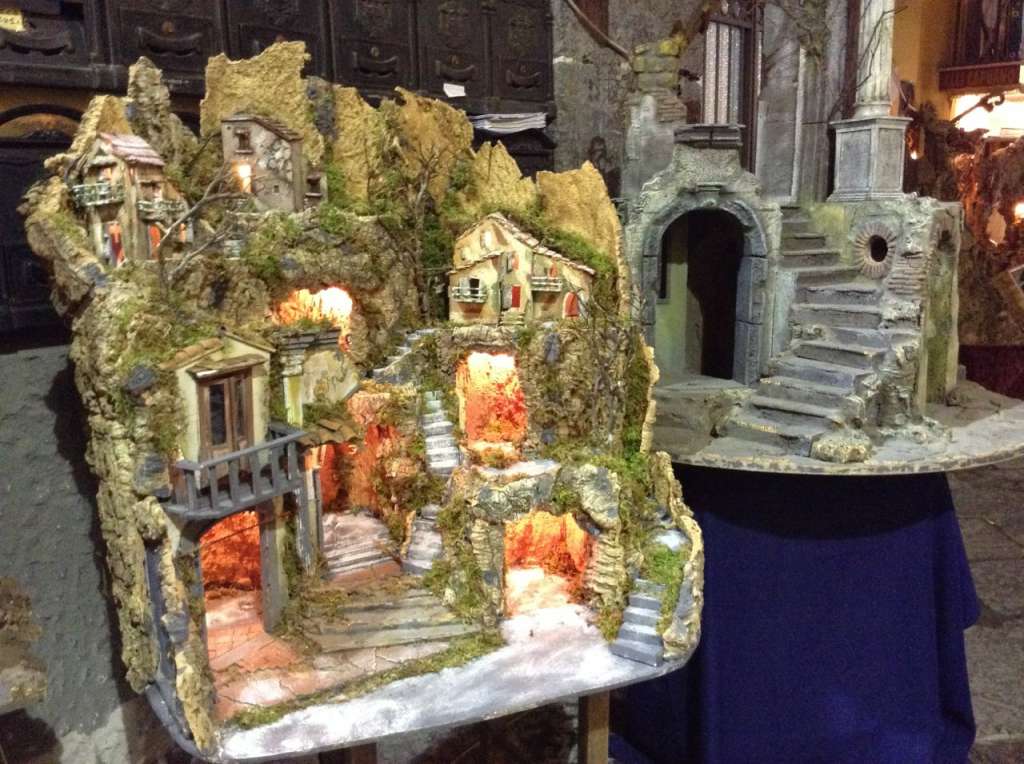 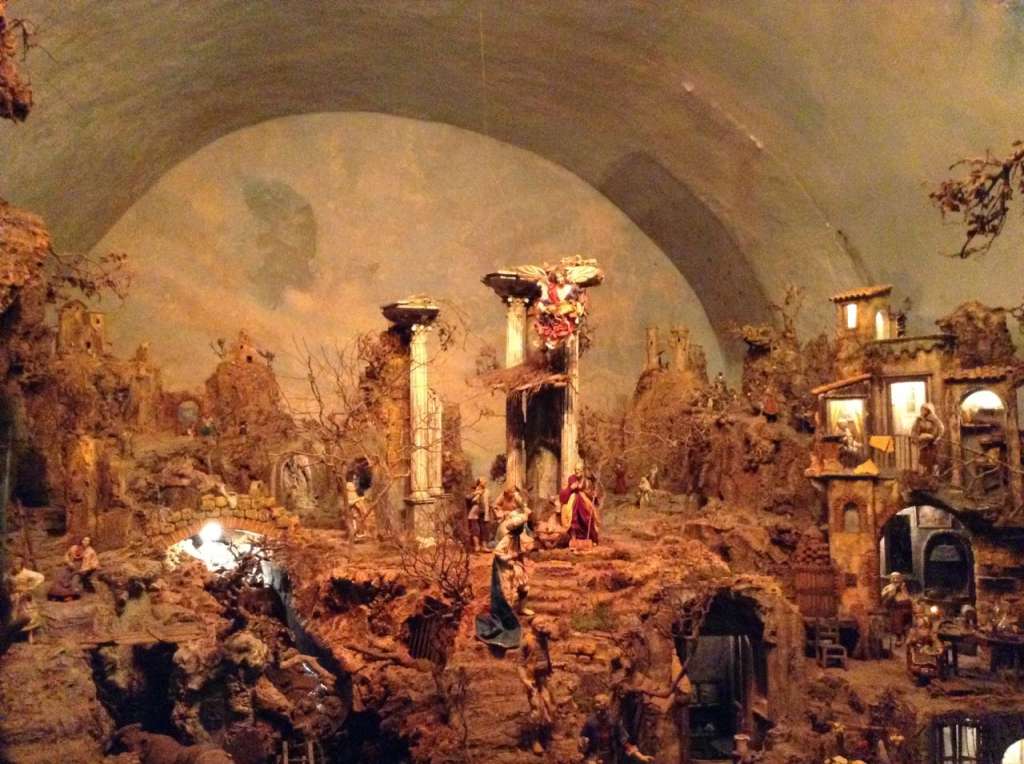 A huge presepe in the basement of a workshop. 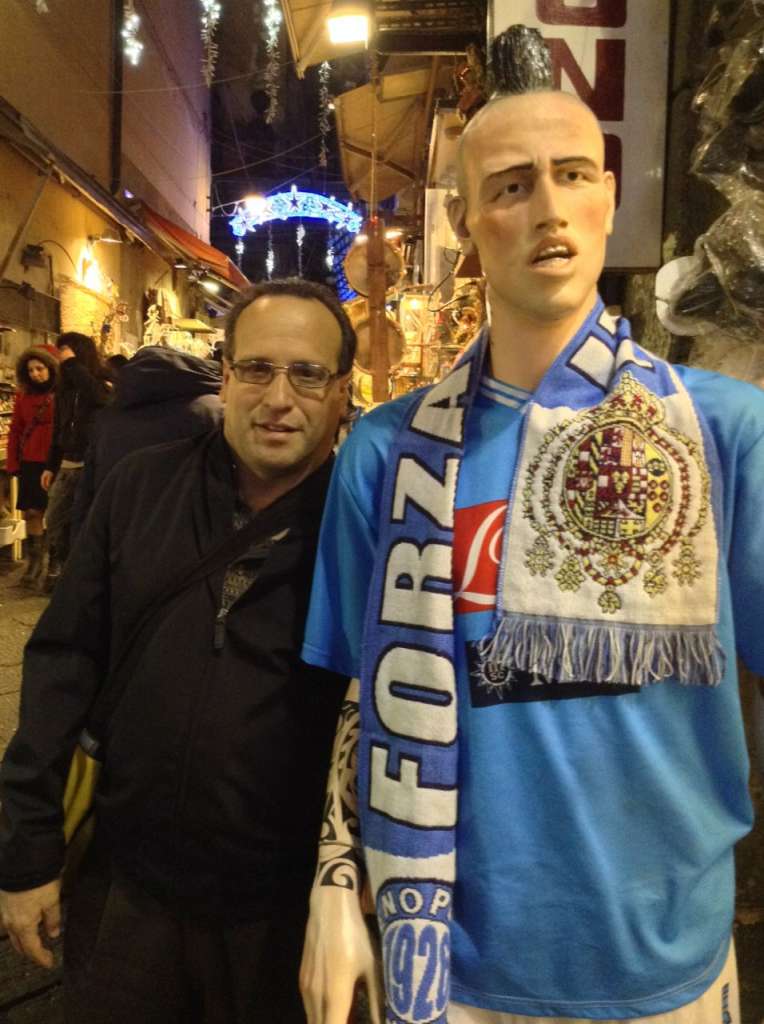 The do full-sized figures, too.

Some of the set pieces are automated, or feature running water. We bought a small fountain, a breadshop, and a pizzeria for our home Nativity. There are shops selling famous brands like Fontanini but the focus is really on hand-crafted, hand-painted works of art by the craftsmen and women of this street. And they take their crafts seriously!

The street was a mob scene that night, being Epiphany and with most Neapolitans off work. Here we were on our first night thinking this was the norm for Naples at night! Well, the streets would always be busy in this area in the evenings but we would find this night it was exceptionally so. After we finished our shopping, we hit one or two more churches before they closed around 8-8:30—most notably the beautiful Chiesa del Gesù Nuovo, which we swore we would revisit the next day to see in better light and without being rushed out the door.

What to do with the rest of the night? We weren’t really hungry, but after dealing with the crowds and the sensory overload, I needed a drink! We ended up at Gran Caffè Neapolis, which I would later find out serves perhaps the top-rated espresso in all of Naples. I, on the other hand, was more in the mood for a good libation of the alcoholic variety. They have a huge menu of drink offerings from coffees, hot chocolate (spiked or not), tea, wine, spirits and original cocktails—along with savory and sweet bites to enjoy.

I had a very tasty cocktail I recall was called an “Orange Bliss”, featuring aperol and fresh orange juice. Of course as always in Italy they brought us munchies to go with our drinks: chips, tramezzini, and nuts, so we really ended up not needing to eat anything else that night. We sat for a while outside in Piazza San Domenico Maggiore, where it seemed everyone in Naples had brought out their dogs for the evening walk.

Tired and a little overwhelmed by our first partial-day in Naples, we headed back to our apartment, braved the stairs and collapsed early for the night.