January 5: this was to be our last full day in Rome. The weather did not seem like it was going to cooperate so we figured this would be another good day to devote to palazzos and other indoor spaces we had not visited before. First stop? Palazzo Barberini. We really wanted to see the collection of art there, which promised works by Caravaggio, Raphael, and Hans Holbein. 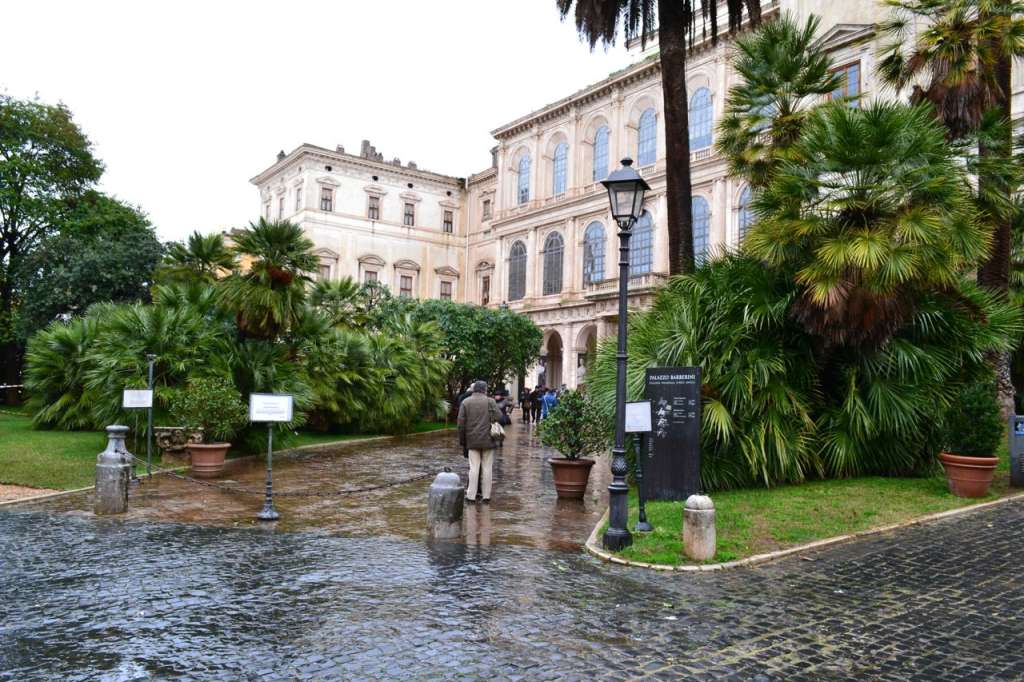 Outside the Palazzo Barberini

First though, let me get in a small rant about Rome which I’d experienced in 2009 and has not changed one bit: people in this city HATE GIVING CHANGE. Seriously. No one has change, and no one will give you change…even most grudgingly with a purchase. We’d had this problem with Roman taxi drivers four years ago and things had not changed one bit. If you’re planning on visiting Rome, hoard every Euro 50 cent, dollar and 2-dollar coin you can, because no one will give you any if they can avoid it. And if you’re like us, you’ll end up spending most of what coins you have in church light boxes and then end up in a bind somewhere when you have no change and no one will make any change for you either.

So first we found ourselves without change for a taxi driver on our way to Barberini, and I felt bad that he took less than his 11.20 meter because he didn’t have change for our 15 Euros. Then Palazzo Barberini doesn’t take credit cards or ATM cards for admission, so we had to pay with our last bit of cash. Then, we find that bag checks were mandatory…and the lockers there each require a 1 Euro coin to use.

The locker clerk was dismissive; sorry, she could not change my 5 Euro bill, no change. I went to the palazzo bookstore clerk who nearly cursed me out for asking for change, even if I wanted to make a purchase. Finally I went back to the ticket agent and rather angrily suggested I needed our ticket charges back if we could not enter, because I did not have 1 Euro to put in a mandatory locker. Grudgingly, then, I was at least given change by her if I promised to return the coins once we were done (the Euro coin only activates the locker; you get it back when you unlock it when you are done.)

It’s too bad that experience soured me a bit on the whole visit, as Palazzo Barberini does have some wonderful works of art in its collection. It’s a must visit at the very least for Caravaggio’s incredible Judith Beheading Holofernes, a work full of such emotion, drama and human expression that you could stare at it for hours and not get enough. There are also numerous works by the Caravaggisti that give a sense of his influence on art, and the incredible ceiling fresco by Pietro da Cortona, Allegory of Divine Providence and Barberini Power.

Once we were finished in the palazzo, we lunched on paninis near Via Veneto and tried to figure out the rest of our afternoon. It would be a bit of a walk, but I wanted to see San Giovanni in Laterano, or St. John Lateran. Sweetie had only been there once, many years before with a tour group—and he didn’t even remember it until we were there. So we started the slow journey there first along Via di Quattro Fontana (which brought us to a few more great churches, including San Carlo alle Quattro Fontane and Santa Prassede) and then down Via Merulana. 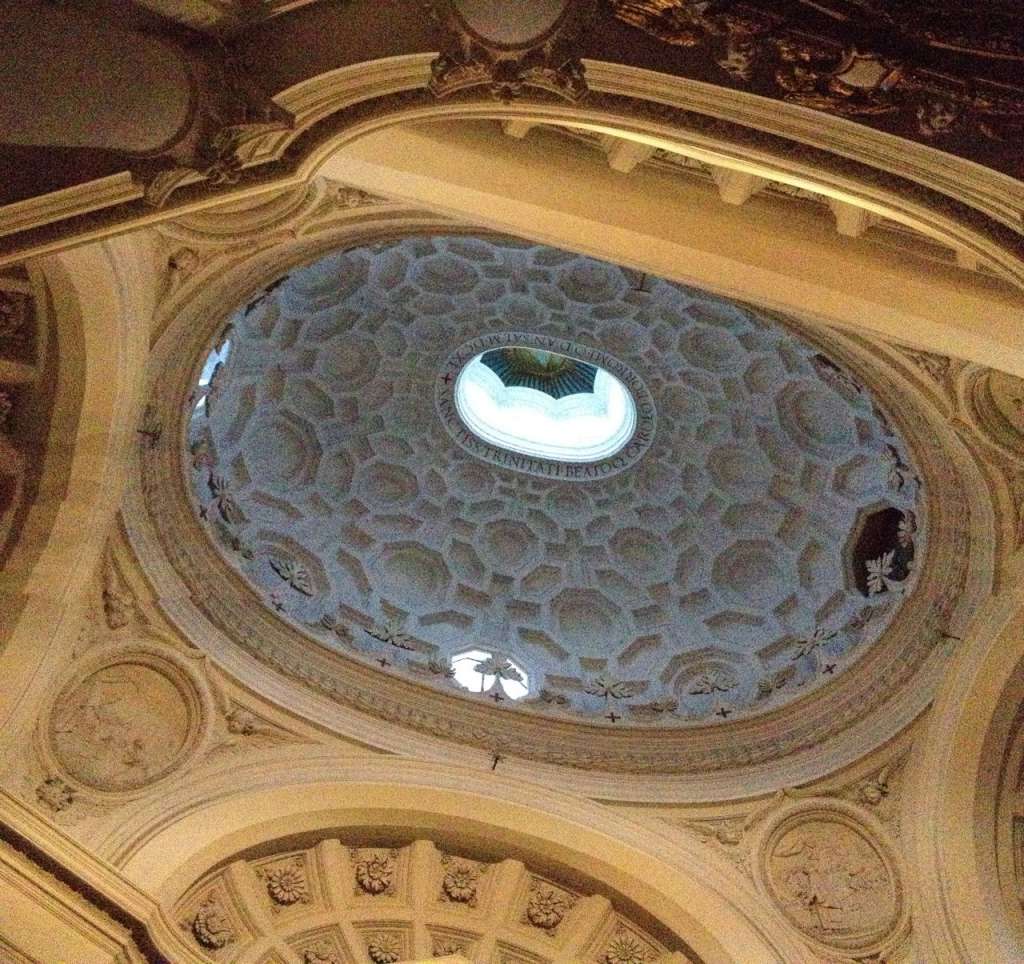 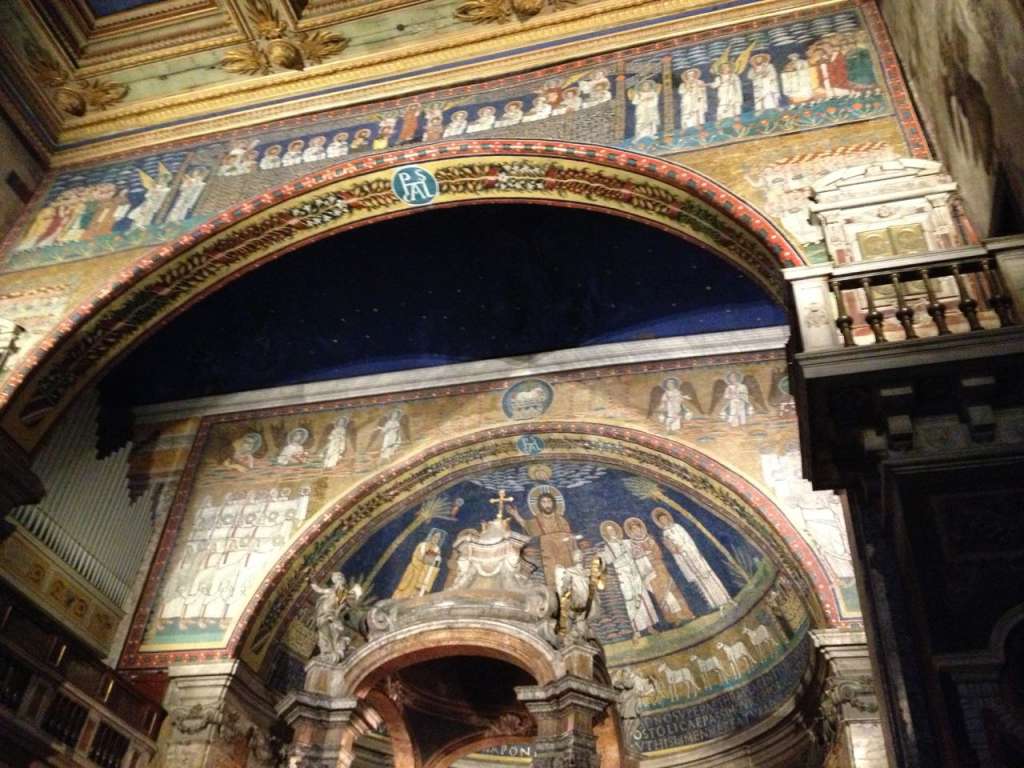 The beautiful mosaics inside Santa Prassede

The archbasilica of St. John Lateran is an incredibly important church in the Roman Catholic faith: it is indeed considered the “ecumenical mother church”, the oldest of the four major basilicas of Rome. It is also an astonishingly beautiful church, from its imposing exterior to its magnificent interior, baptistry and attached cloisters. Mass seems to be held almost perpetually inside, so it can take a while to wait between services to be able to explore around and take photographs. 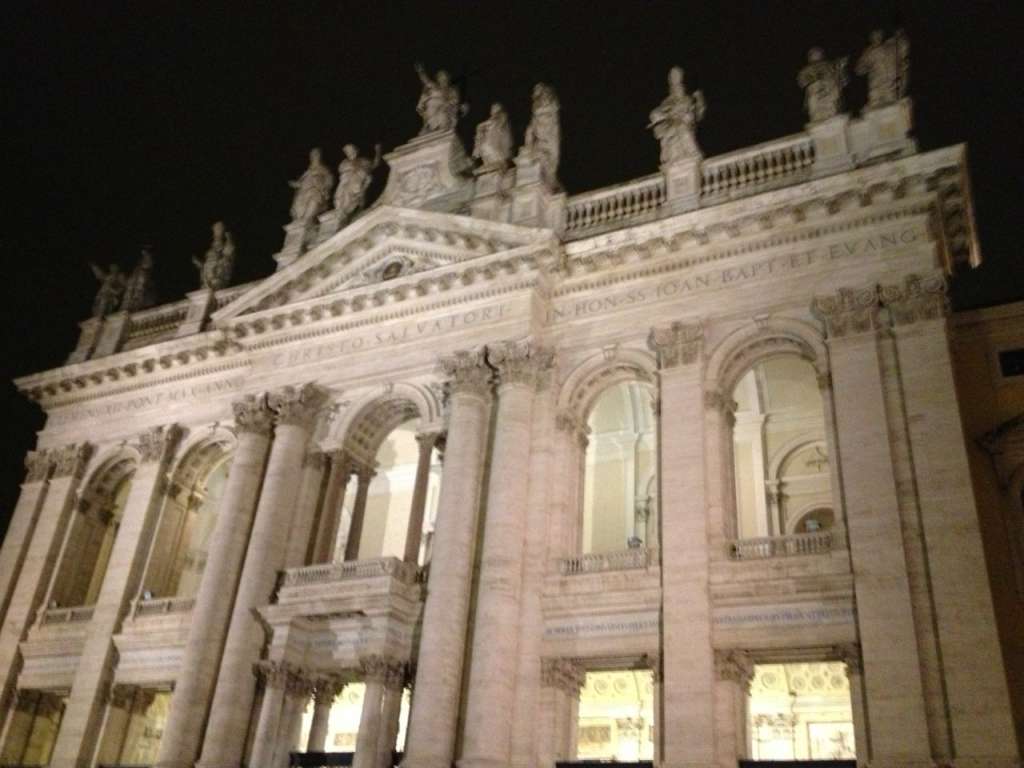 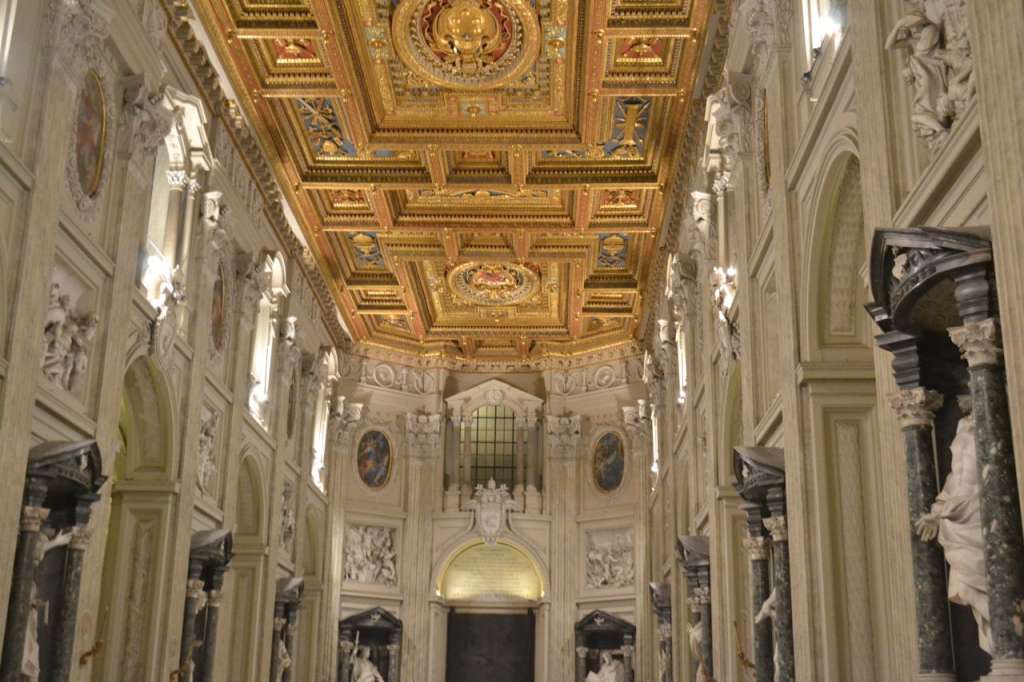 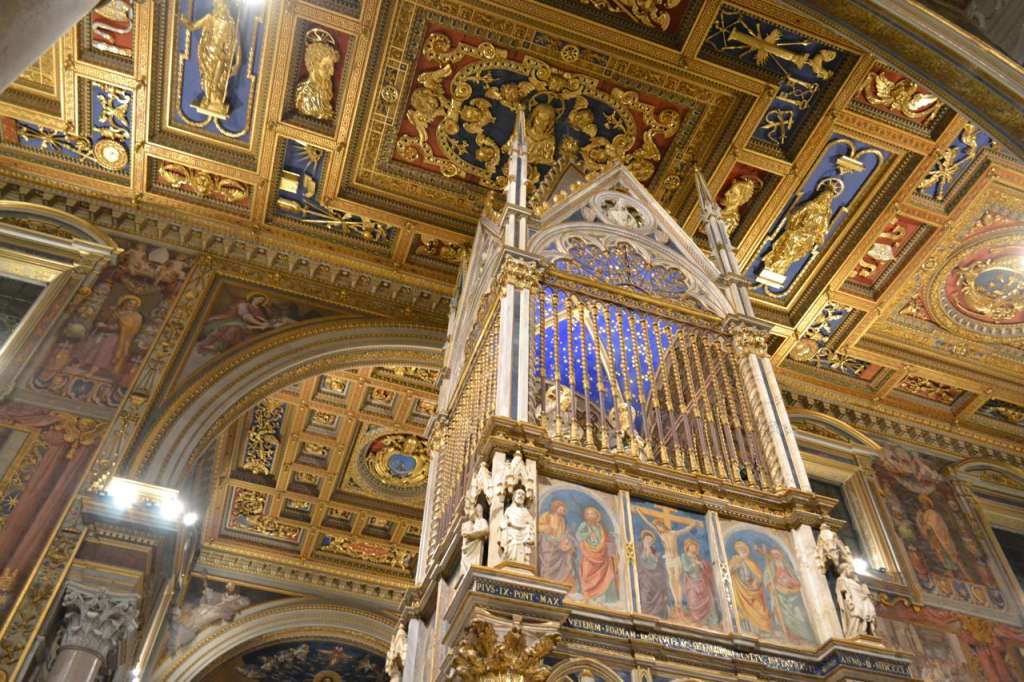 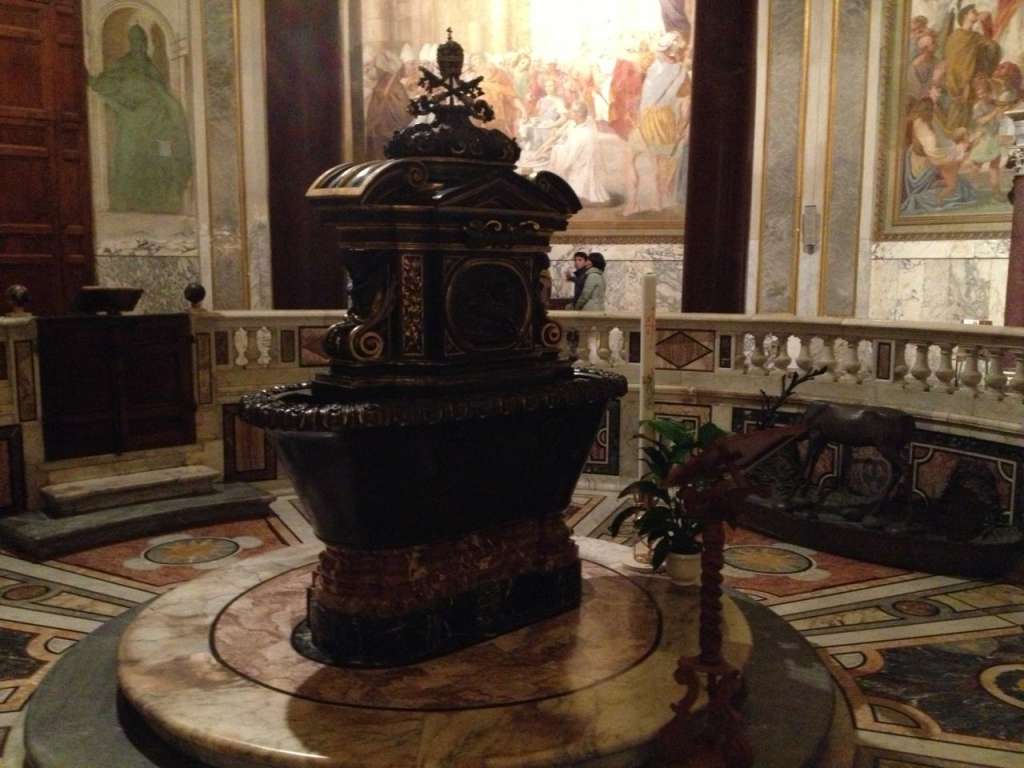 Next to the church is the Scala Sancta, or Holy Steps. By Catholic tradition, these are in fact the very steps from the praetorium of Pontius Pilate in Jerusalem, where Christ stood during the Passion. The marble steps are now covered with wood (although there are spaces where you can reach through to touch the marble). You are only allowed to ascend the staircase on your knees—and trust me, it is not an easy experience. But for the faithful it is a moving experience, and one for which you are granted an indulgence of nine years for every step climbed. 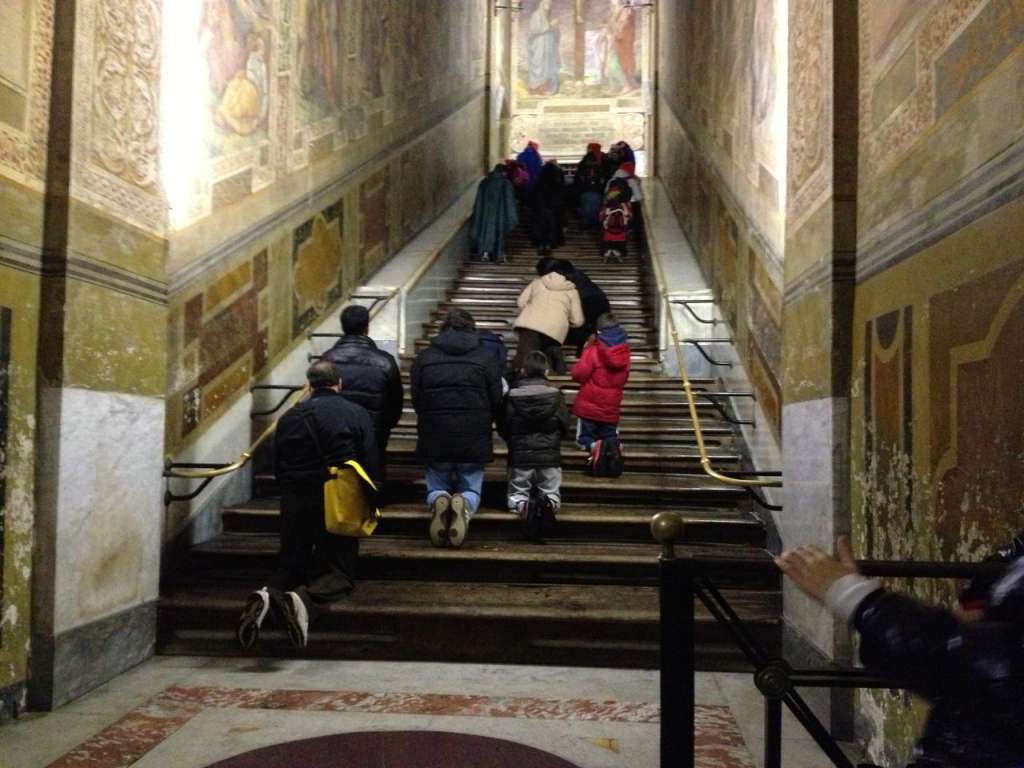 After that religious—and physical—exercise, it was time for a quick break. We stopped in a small cafe for a light bite and some drinks before walking along Via di San Giovani in Laterano toward the Colosseum. How can you come to Rome and miss seeing the Colosseum? Especially at night it is a breathtaking vision. 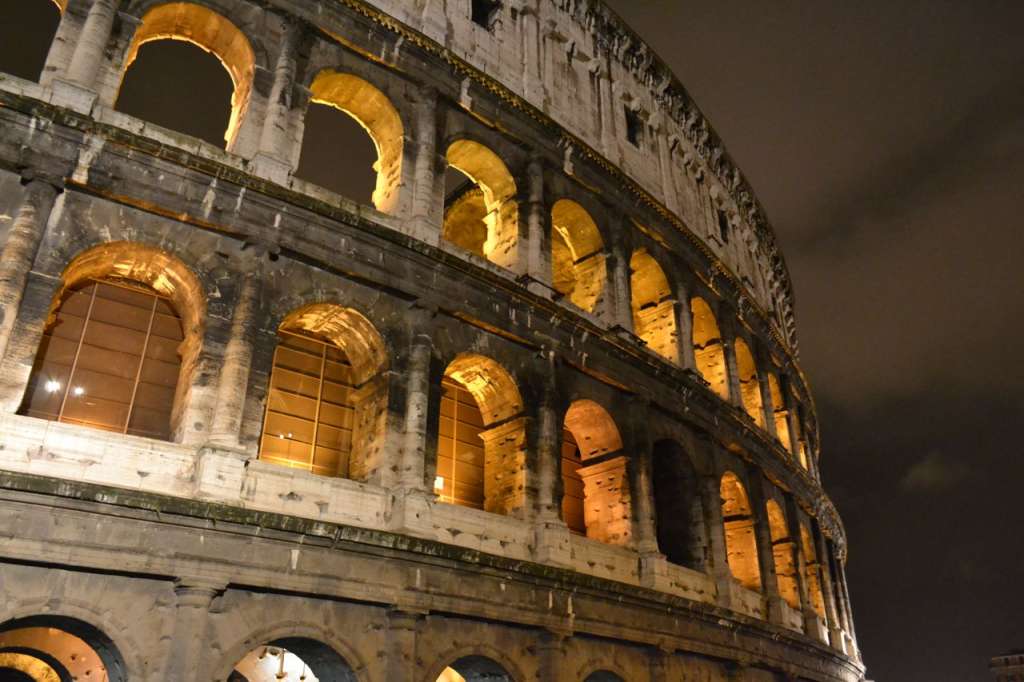 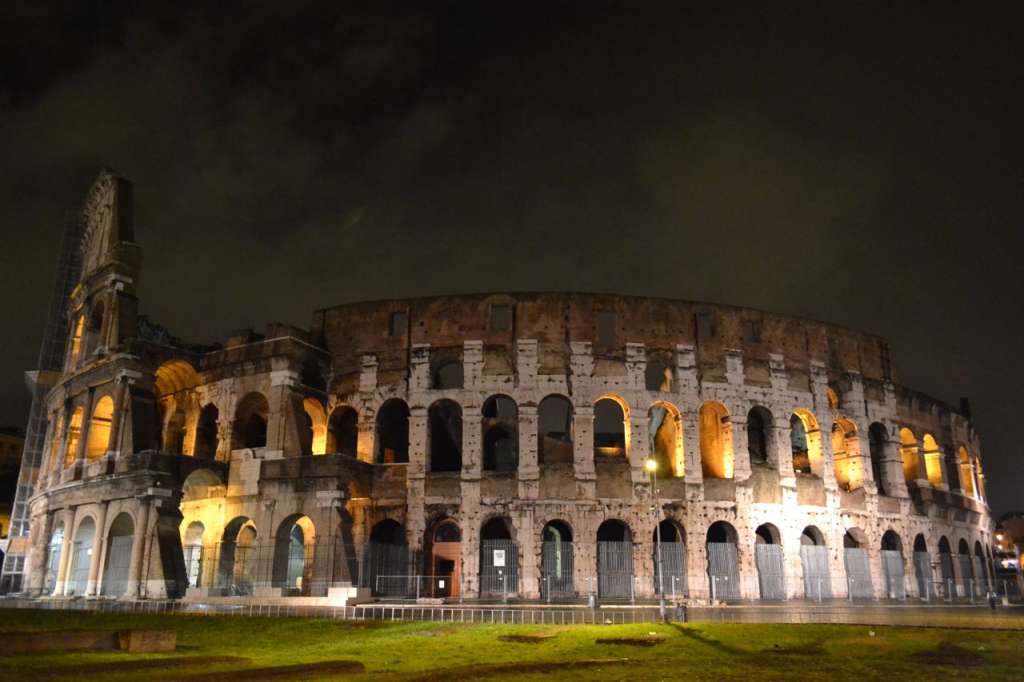 We walked the full circle around the Colosseum in the light drizzle of rain, and by then it was time to make plans for our “last supper” in Rome. One restaurant in Testaccio which I really wanted to try was Da Bucatino. Famous for the pasta noodles it’s named for, it was also apparently a favorite of Salvador Dali and many other celebs whose photos adorn their walls. Our taxi driver immediately recognized the restaurant name and gave it an enthusiastic review, recommending we definitely get their famous bucatini all’Amatriciana.

The restaurant itself is fairly large and tightly packed with tables. We were lucky enough to squeeze into an available table for two, surrounded by locals and other tourists “in the know”. So how would the food live up to the hype? Quite well, I’ll have to say. 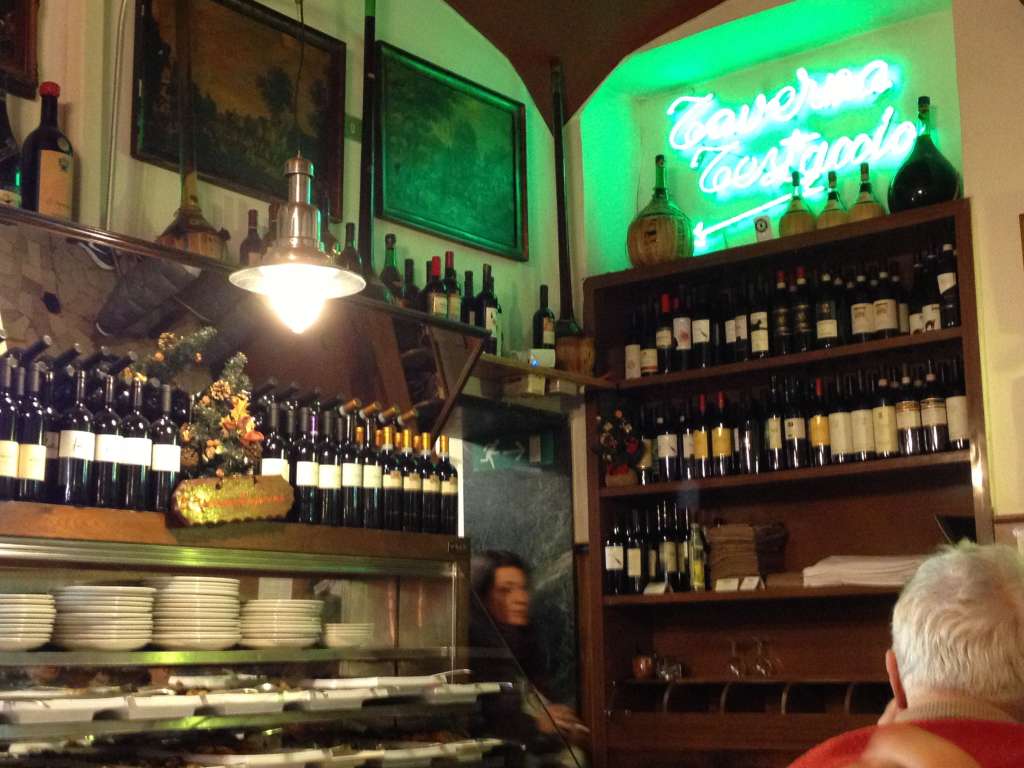 Grab a plate and start eating!

We started with their mixed antipasti bar, which was overflowing with delicious vegetable and seafood selections that evening. From memory there were wonderful marinated olives, anchovies, Roman beans, fried eggplant, roasted tomatoes, caponata, cipollini onions, salad greens and much more—easily about 20 different offerings available. The hard part was not loading up on too much so we’d have room for the rest of our meal. 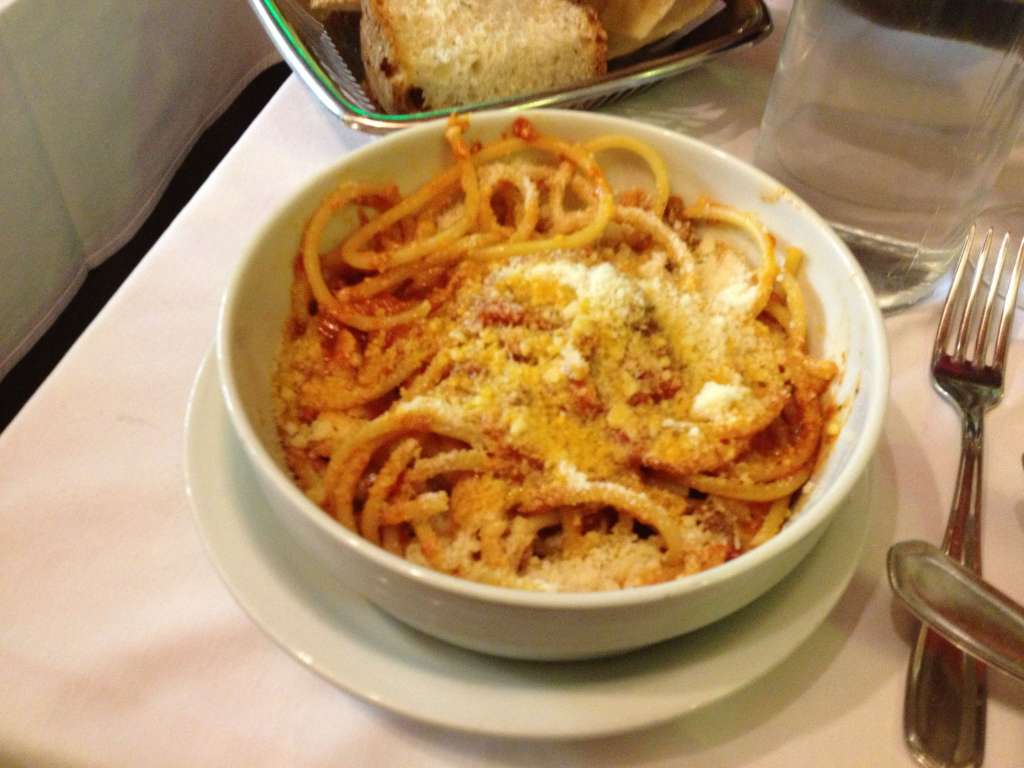 There it is, the most famous dish of the restaurant. Rich and hearty, the flavor really spoke of the guanciale used and the fresh salty cheese. The bowl was also HUGE and I struggled to even do justice to half of it, being such hearty fair. Seriously, you could share one order of this for two people. When did pasta primis get so big in Italy?

Also, apparently when you order the bucatini here, they sneak up behind you to tie on a bib, so you don’t ruin your clothes with the slurpy sauce. Much appreciated. 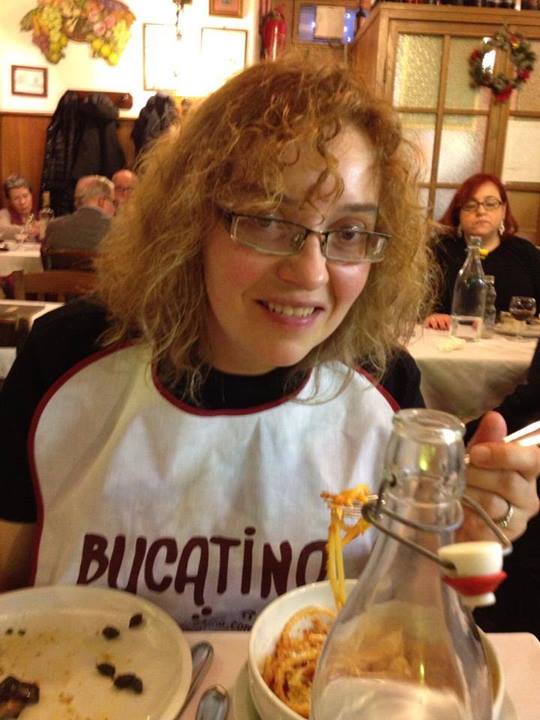 The sweetie also got a pasta, which regrettably I didn’t get a great photograph of. I believe it was a special of the night with artichokes, bacon and cheese. Equally hearty, equally delicious.

We’d also been temped to order the special of coniglio alla cacciatora—that is, hunter-style rabbit. Our waiter checked if we still had room for it, and even though it would be a struggle we couldn’t pass up the opportunity to give it a try. And I’m so glad we did, I think it was one of the most memorable plates we enjoyed in all of Italy this trip. 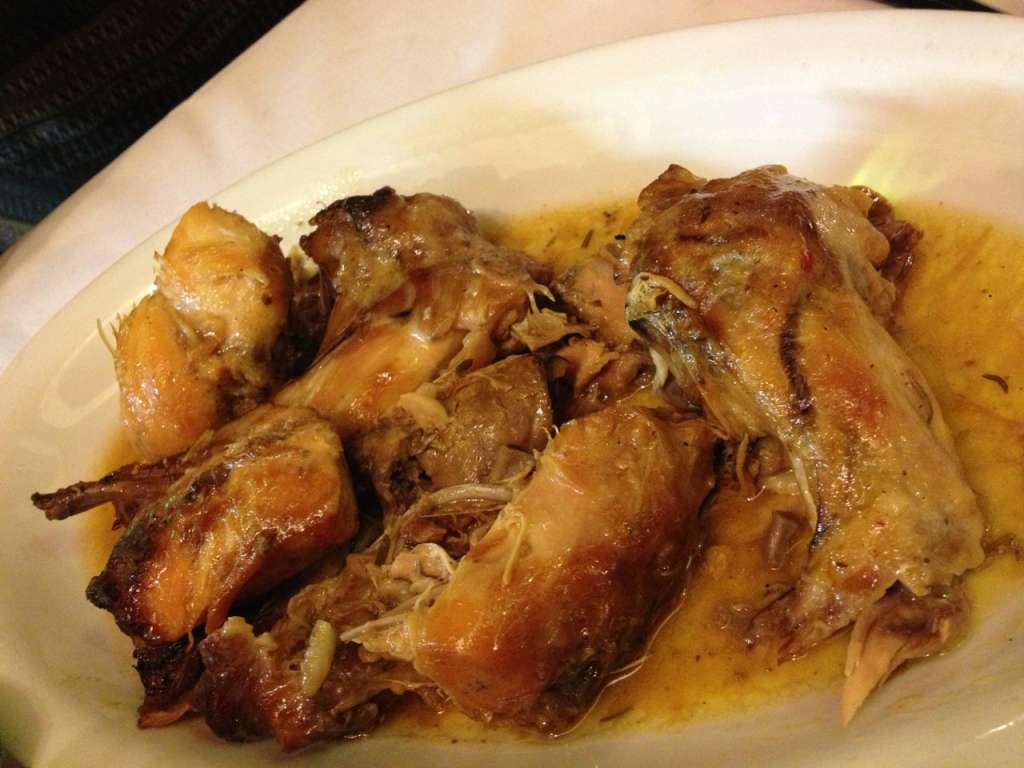 This was just exceptionally fabulous and well-prepared. The meat was fall-off-the-bone tender and had a wonderful flavor rich with lemon, wine (vinegar?), and fresh herbs. I also loved that the liver was served on the plate as well—truly the best part of the rabbit! We savored it slowly, working away until there was barely a scrap of meat left on the plate.

Dessert was more a matter of soothing the stomach a bit than needing a sweet treat. But the pistachio pudding with chocolate sauce was luscious and light, a great end note to an exceptional meal. 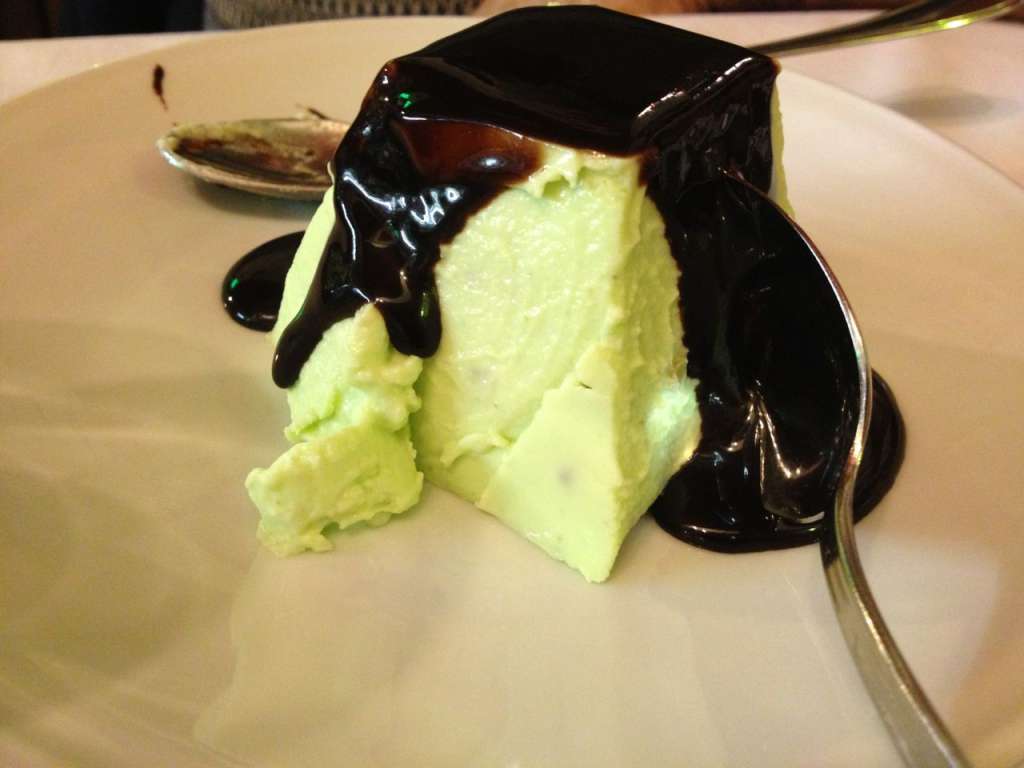 As I recall the bill was around 65 Euros, very reasonable for the delicious meal with water and a good amount of red wine. Somehow we staggered home and collapsed for the night with very full stomachs. In the morning we’d be saying good-bye to Rome and heading toward our next destination: Napoli!