I am just back from 17 days in Italy with the sweetie, which we spent traveling between Rome, Naples, Salerno and various stops along the Amalfi Coast. Needless to say we saw a tremendous number of sites, from the Vatican to the ruins of Pompeii and Paestum—we even got to visit a buffalo mozzarella farm!

But more about all of those things later. I am (once again) going to attempt a day-by-day trip report with of course a serious focus on the food we enjoyed. And this time I promise to finish it in a timely fashion, or at least that is my plan… 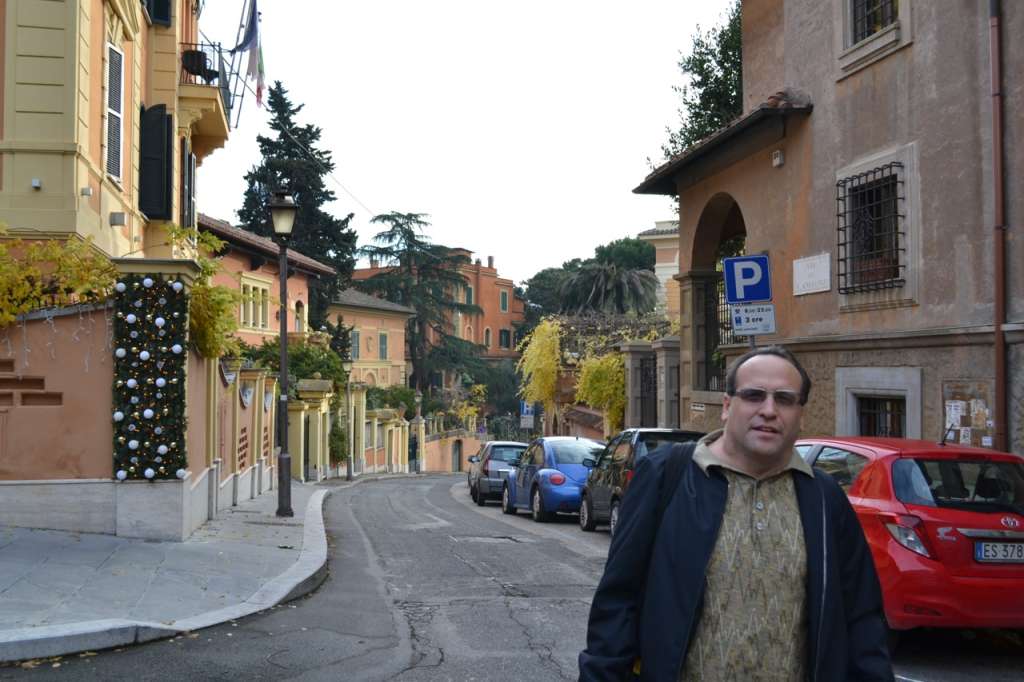 The sweetie outside our hotel in Aventine Hill.

We arrived in Rome on the morning of January 2 after a direct overnight flight from Philadelphia. This would be my second visit to Rome; in 2009 we spent ten days there but this would only be a 4-day stay before heading further south. I decided we’d start the trip off with a bit of a splurge, booking us at the beautiful Hotel San Anselmo in Aventine Hill. A little bit outside of the historic center of Rome, this was still a good location for us as Aventine is more residential and quiet—plus it’s very close to one of the best areas of Rome for “foodies”, Testaccio.

We arrived too early to check in, but our hotel was at least happy to store our bags so we could go exploring for a few hours unburdened by heavy suitcases. The hotel clerk mentioned we were just “around the corner” from the legendary Aventine Keyhole, but we made a wrong turn and ended up down along the river and in Testaccio. Ooops! But not to worry, that at least allowed us the opportunity to pass by the droolworthy windows of Volpetti, a world famous salumeria. 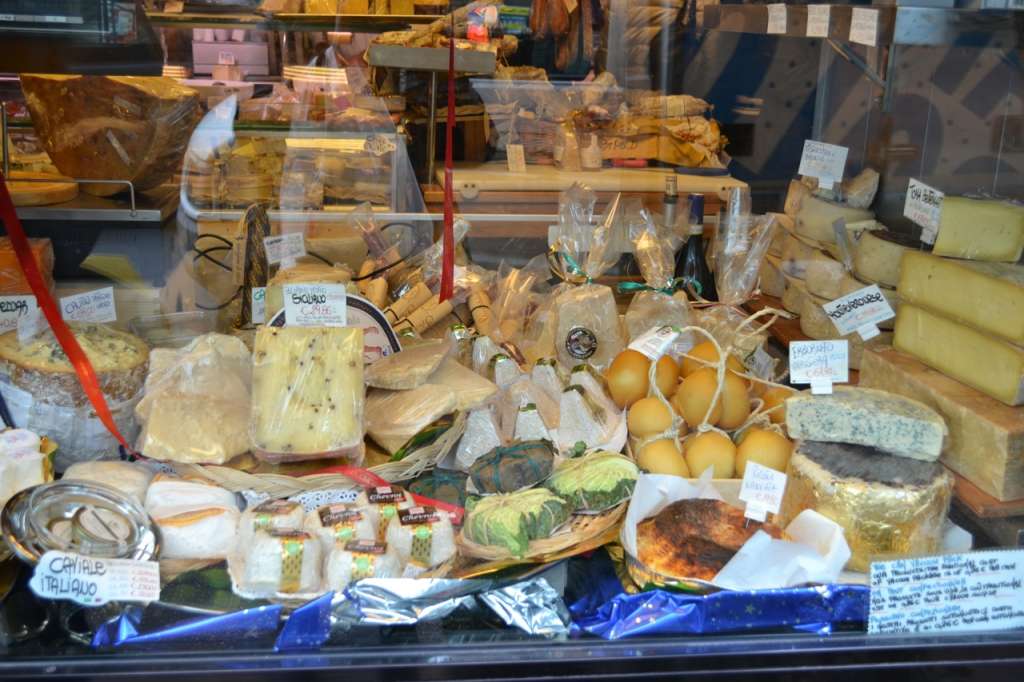 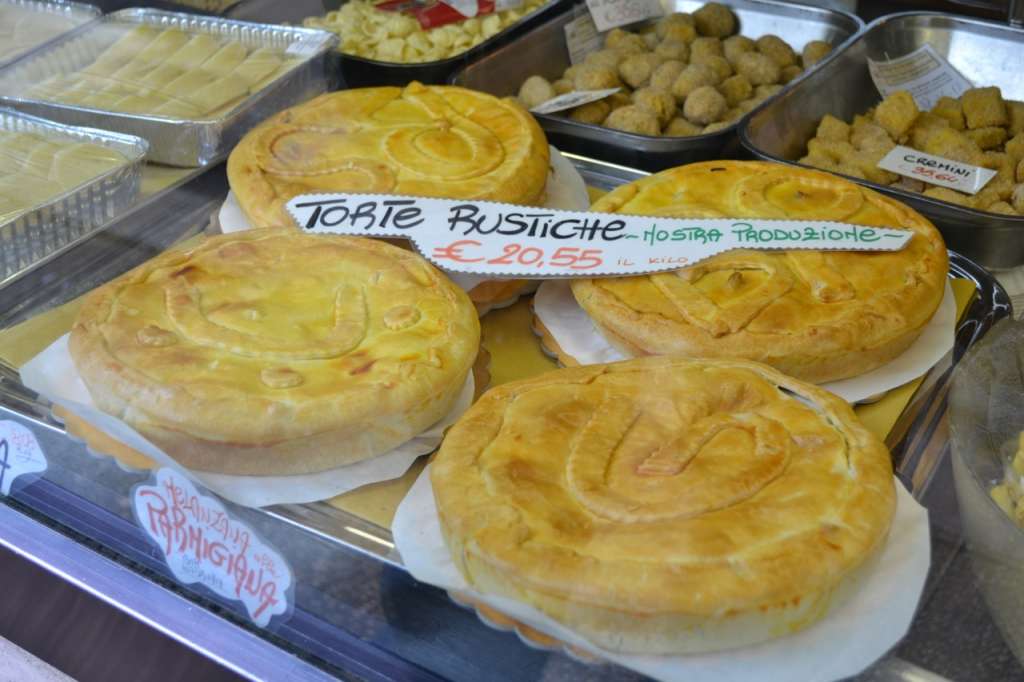 As yes, welcome back to Italy. I was also amused by the Christmas Cakes on display in the bakery next door – including edible nativity cakes! 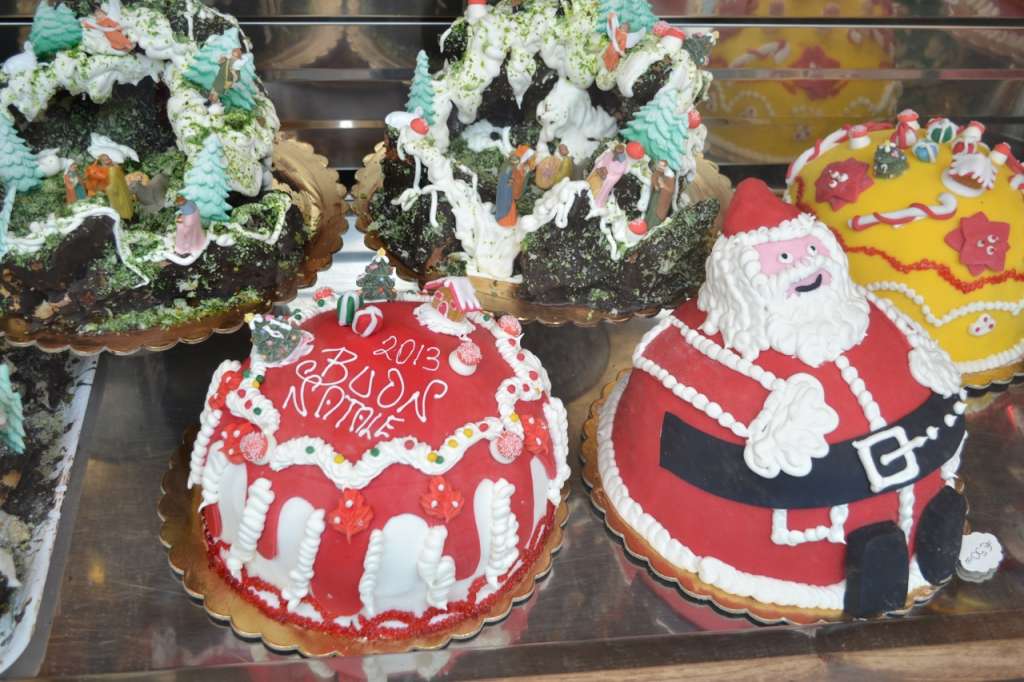 Well, we couldn’t resist going in Volpetti, where we were cheerfully helped by an older gentlemen who spoke not one word of English. With our poor Italian and lots of hand gestures we ended up with a delicious picnic package of incredible cheeses, house-made spicy and sweet sausage, prosciutto and cheesy bread twists. These treats ended up being our room snacks for more than a few days…

We made our way back up to Aventine Hill and finally found the keyhole! It was amusing to look through, but I’m not sure it was worth the constant stream of tour groups arriving by mini-van to see. So we spent a few hours exploring several lovely old churches in the immediate area which we had not seen at all on our last trip, including Sant’Alessio all’Aventino and Santa Sabina. The views from the parks of Aventino were lovely, and I even spied a pair of wild green parakeets in and amongst the orange trees! 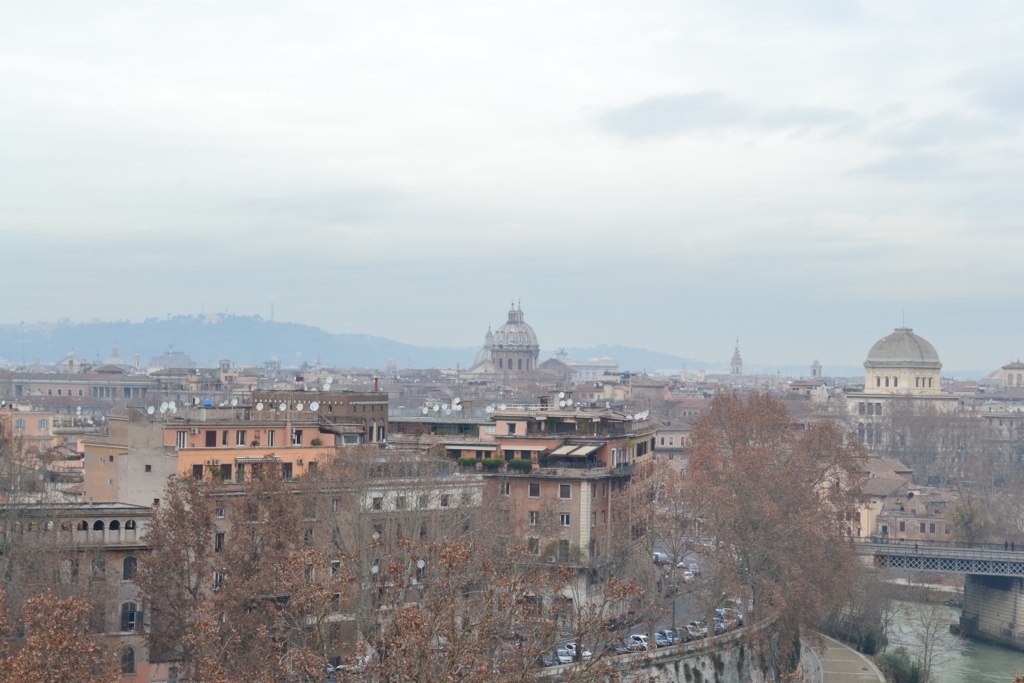 Taking in the view from Aventine Hill

We kept walking until we hit a great viewpoint over Circus Maximus, but by that point we were getting a bit foot-sore and sleepy from the flight. Time to try to check into our room. We managed to get in and then take a bit of a rest for a few hours.  I amused myself watching an Italian cooking competition show on the television, but then it was off for another walk. 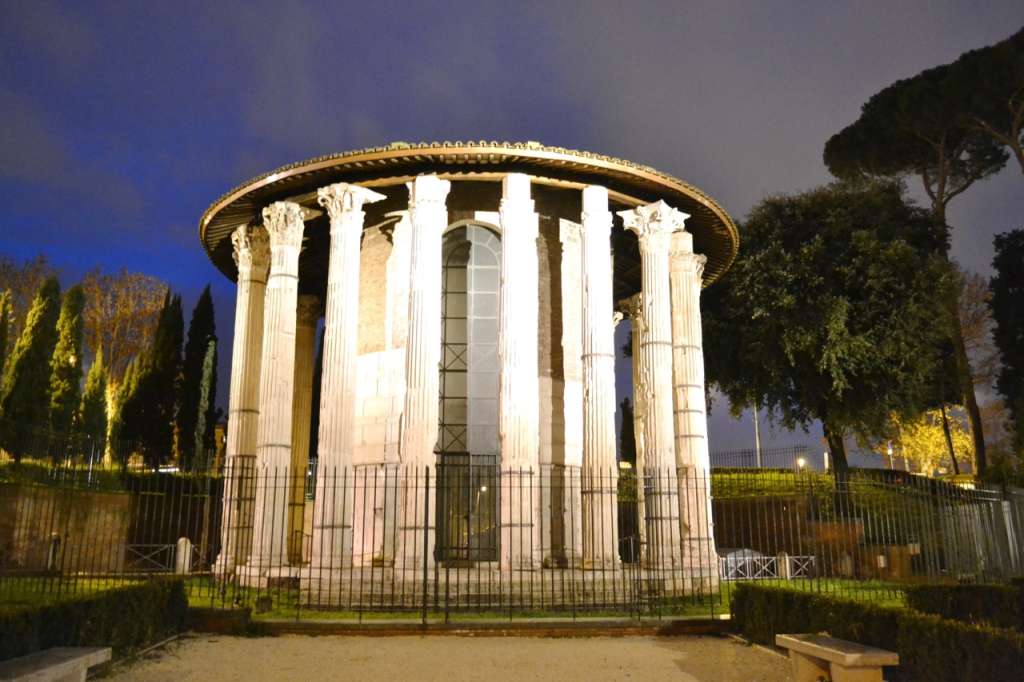 Temple of Hercules Victor. No, that’s not photoshopped.

They say that Rome is more beautiful at night, and I have to say that I agree completely. The sight of the ancient city ruins, temples and churches lit up in the evening is unforgettable—and worth many a photograph, even on a rainy and cloudy night. From our hotel we walked along the Lungotevere until we reached Santa Maria in Cosmedin, where hundreds were lined up to stick their hand in the mouth of the famous Bocca della Verita for a photo-op. I was more interested in the beautiful interior of this 8th century church and its eerie subterranean crypt. 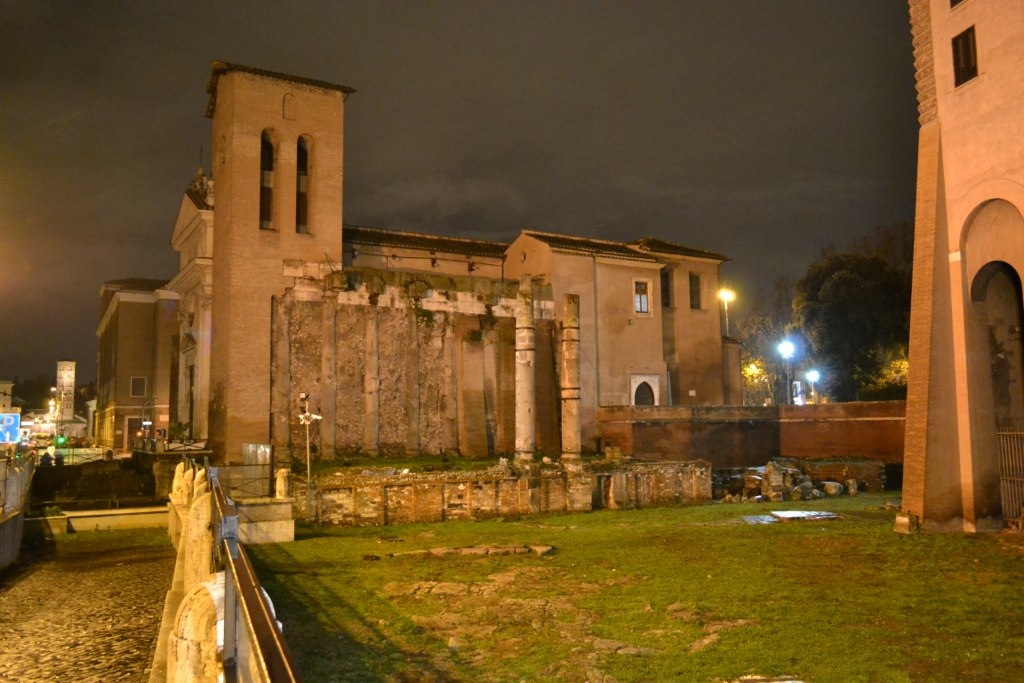 San Nicola in Carcere. Notice the columns from the Temple of Speranza in the wall.

But there were more “cryptastic” surprises ahead as we walked on to San Nicola in Carcere. The current church dates back to at least 1128 but evidence supports it as a site of a church going back to the 6th century. Built over the ancient Forum Holitorium, a visit to the underground crypt allows you to visit the ruins of three temples. Quite spooky at night, especially when one encounters bones – yes, bones – just sitting there in an open pit below your feet. 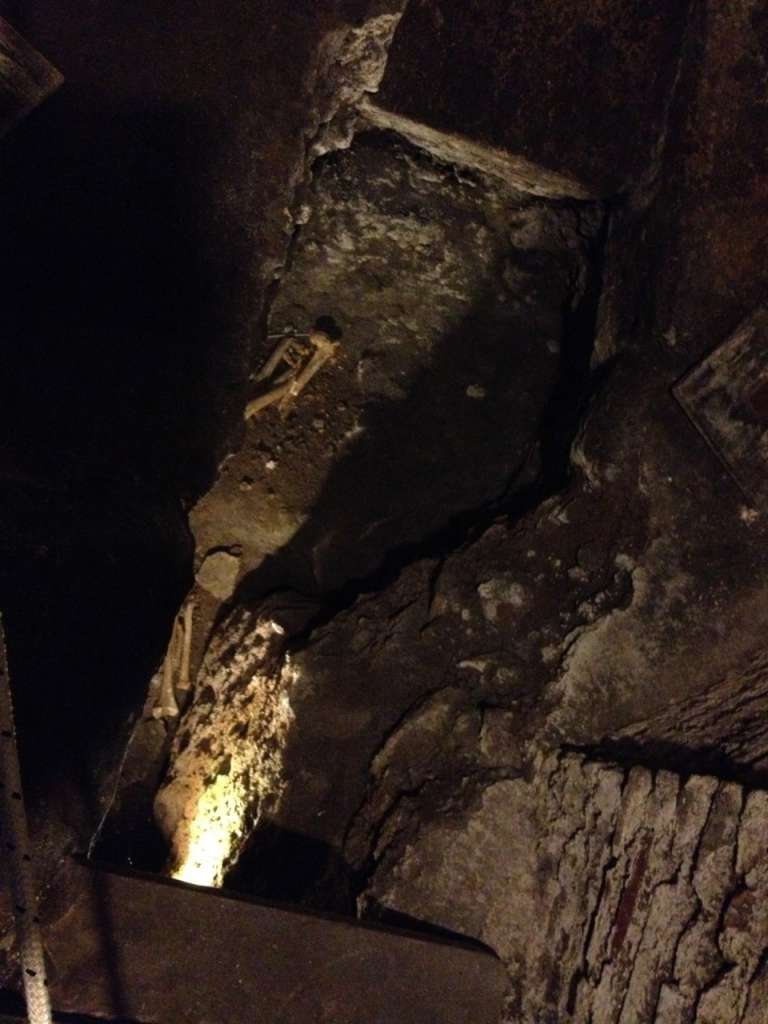 The crypt of San Nicola in Carere

6 o’clock—time for a drink and then some dinner. We ended up enjoying a relaxing few glasses of wine in a small enoteca nearby before our first full meal in Rome. We chose the nearby Ristorante Sant’Anna based on the posted menu (promising my favorites, carciofi alla giuda), and location on a quiet street far away from the tourist crowds. Alas, once we were seated and ready to order, it turned out the chef was out of artichokes that evening! Also missing were basically all of the fish dishes promised on the menu—not a good start to the meal, but being the day after New Year I suspect many places might be low on fresh food inventory.

We allowed our friendly waitress to guide us with her suggestions for the best choices on the menu based on what was available that night. We started with the Corstino alle alici, or oven toasted bread with mozzarella and anchovies. This was really tasty and I loved the combination of salty anchovies and sweet mozzarella on crusty, thick bread. With this we enjoyed the Fiori di zucca pastellati (fried squash blossoms) – freshly made, good but not the best version we ended up enjoying on the trip. 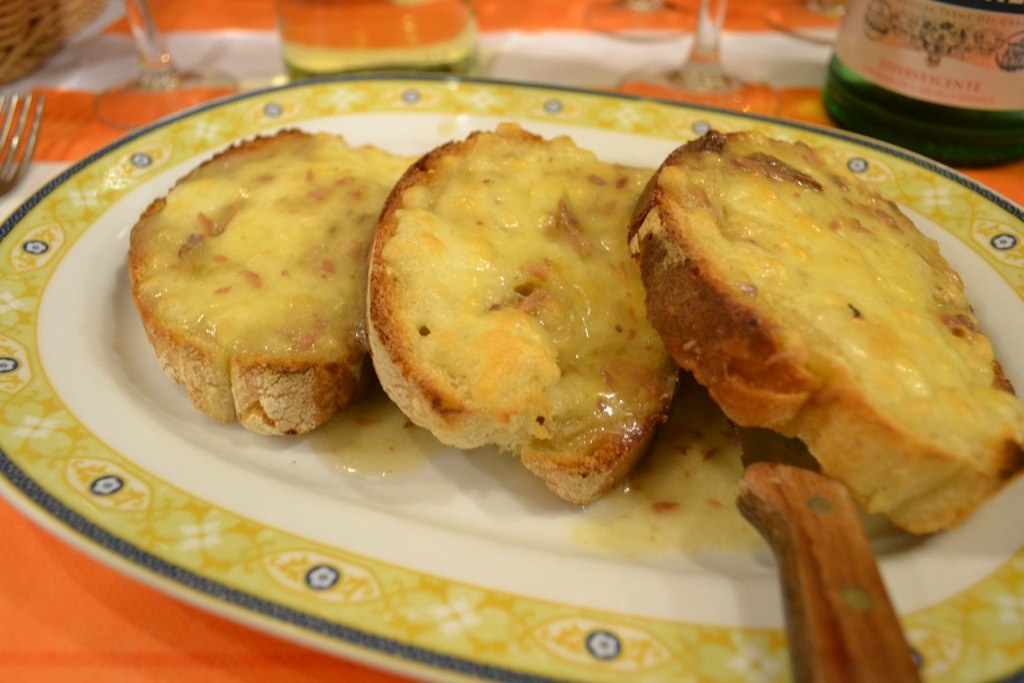 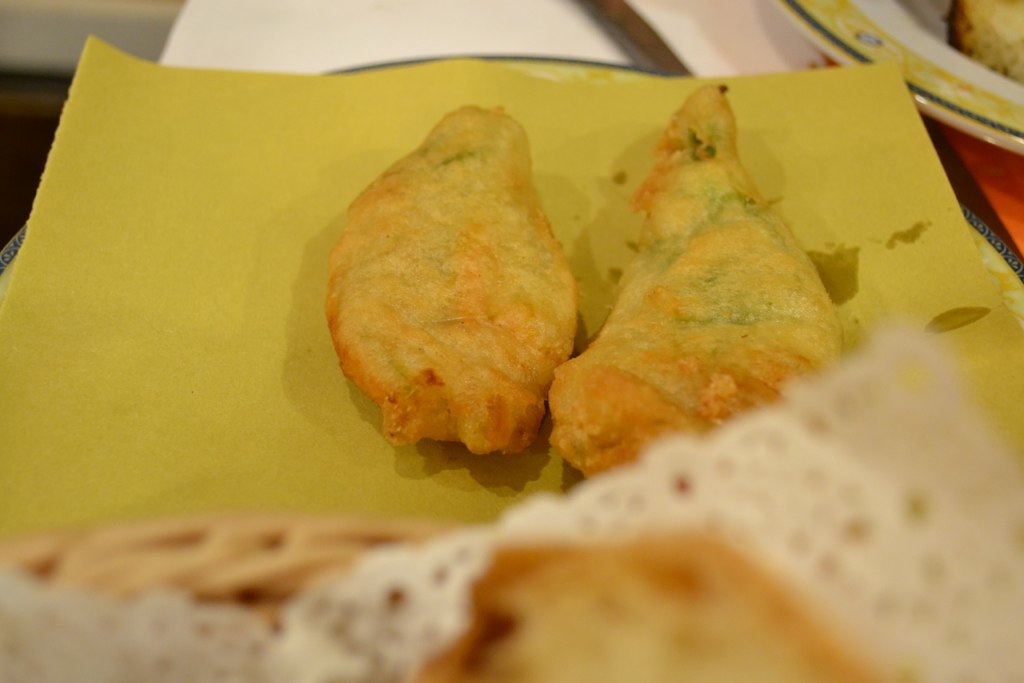 After that, time for our pasta dishes. I had wanted to order the Tagliolini fiori di zucca e cernia (Tagliolini pasta with zucchini flowers and stone-bass), but they were out of bass and offered to prepare the dish with swordfish instead. This was a fine substitution; the pasta tasted fresh-made and the sauce was nice and light. 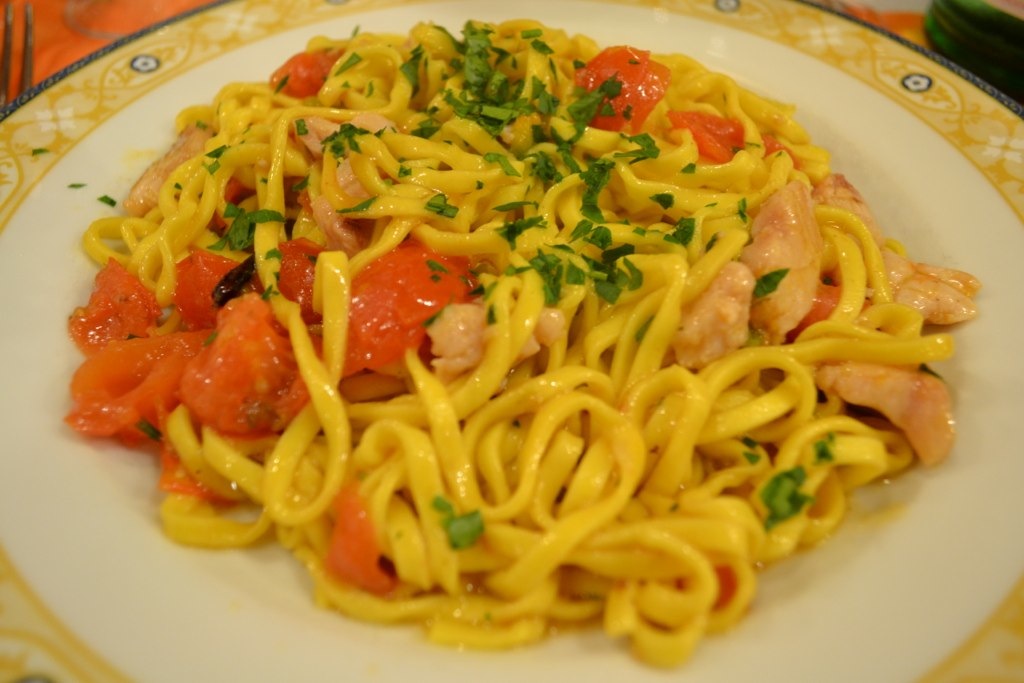 Better still was my sweetie’s unusual pasta dish, Tagliolini al limone. The sauce was a delicate and creamy with a beautiful flavor of lemon throughout. I’ve never had a dish like this before but it’s one I really want to try to replicate at home if I can. Delicious. 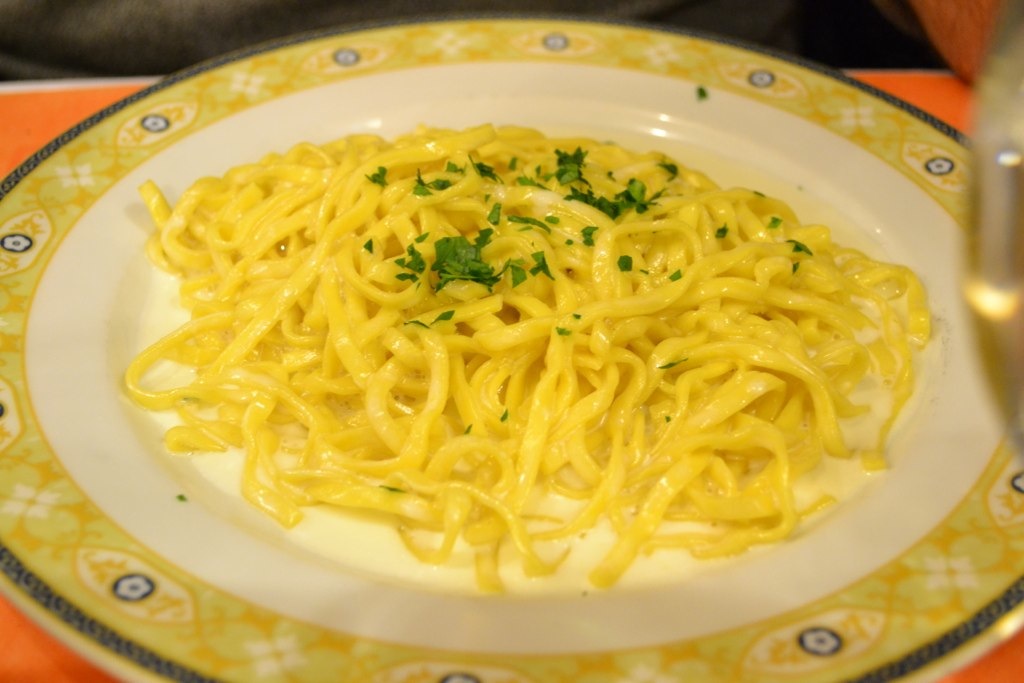 We had thankfully only ordered one secondi to share, the recommended Straccetti di manzo con rucola. This was a nice light steak dish which needed just a touch of provided balsamic vinegar to really finish off. 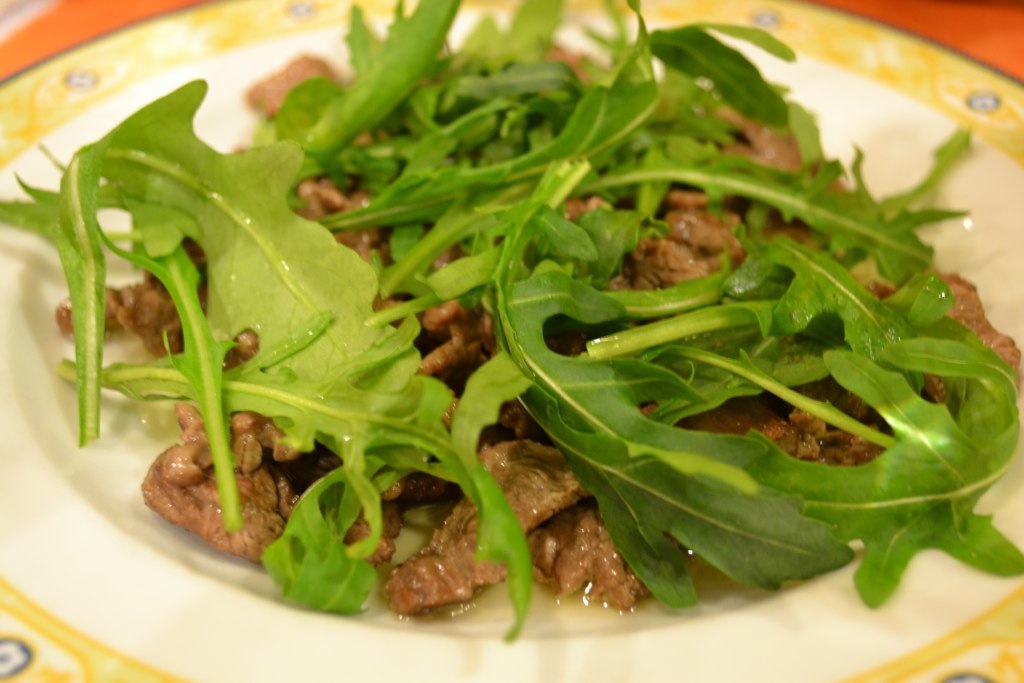 We shared a slice of chocolate cake (which I forgot to photograph) for dessert, along with some espresso—and a shot of grappa for me! The total was an acceptable 68 Euros including a carafe of house wine and some mineral water. Overall I’d say Ristorante Sant’Anna was a good choice for our first meal, although I would have loved to have been able to sample some more of the menu before really passing “verdict” on the restaurant. Perhaps next time…?