It was a sunny if chilly Sunday morning when sweetie and I found ourselves looking for a brunch option and stumbled upon Miller’s Pub. We’d been looking for anything open that wasn’t a chain sandwich shop or — God forbid — deep dish pizza place (sorry, Chicagoans, but my opinion of deep dish pie is basically the same as Jon Stewart’s.) It was 11am and Miller’s Pub was not only open but promised a wide selection of options from breakfast omelettes to full dinner entrees. A quick peek in the door and there was no way we couldn’t stop in for what was supposed to be a light bite, but ended up being an extremely hearty meal to keep us warm and stuffed all afternoon.

Miller’s Pub indeed is a restaurant/bar rich with local history. Miller’s Bar originally opened in 1935, and in 1950 was bought by three Greek brothers: Pete, Nick and Jimmy Gallios. The menu struck a comforting note of familiarity to these two South Jersey visitors who love our Greek Jersey diners. Lots of salads, sandwiches, Greek specialties and Italian-American entrees to be found. 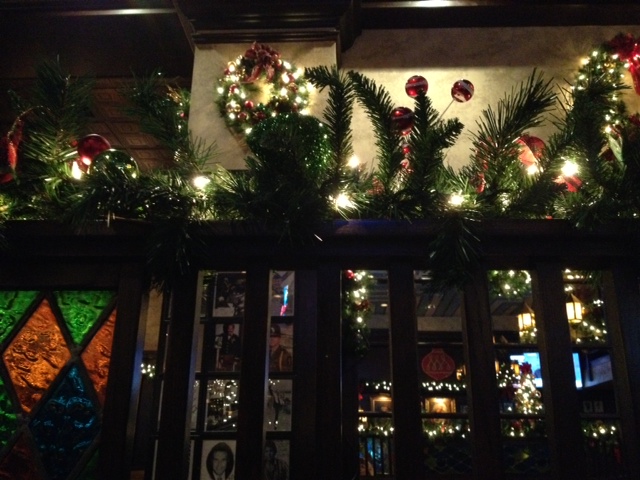 The interior of Miller’s Pub was comforting and cozy as well: all dark wood, stained glass, Christmas decor and enough local sports and celebrity memorabilia to fill a small museum! Clearly everyone and anyone of note who’s been to Chicago has stopped in this cozy pub, and I can imagine how it would be a popular after-theater hangout for both fans and stage-professionals alike.

Although we’d initially planned on just a light “brunch bite”, it was hard to resist the more tempting entrees on the menu. The beer battered cod, starred on the menu as a house specialty, was calling to me and our waitress encouraged that it was one of her favorite offerings. The sweetie had to go for the house specialty “World Famous BBQ Ribs” – a full rack of Canadian Baby Backs. So much for eating light… 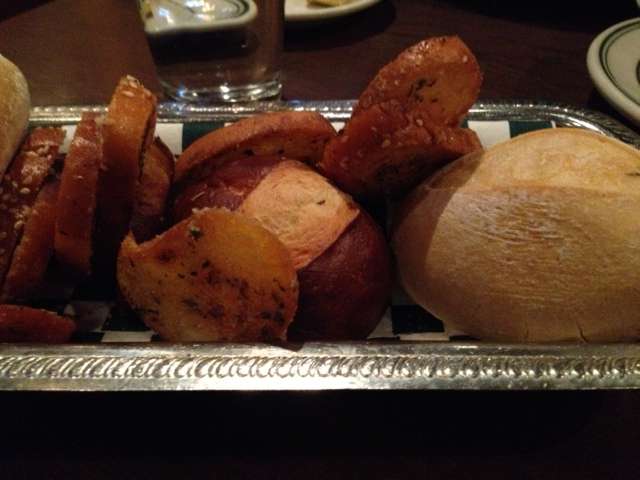 We enjoyed some killer Bloody Marys while munching on Miller’s great bread plate, featuring addictive garlic toast and various fresh-baked rolls. The Bloody Marys could be a meal in and of themselves, given they come complete with pepperoni on a stick! For an old-fashioned restaurant, Miller’s offers a fine and modern selection of drinks including a lengthy array of whiskeys, house cocktails, and beer from around the world. 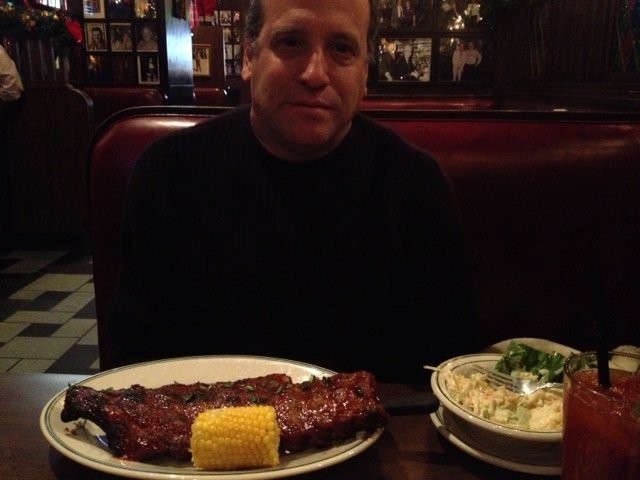 Also served before our entrees was a generous bowl of cole slaw. But the star of the meal was certainly those ribs…even if I only got to taste one small piece. Their house BBQ sauce was distinctly fruity and sweet without being cloying. I wanted to go for more but the sweetie devoured that entire rack before I got a second taste. I guess you could say he enjoyed it! 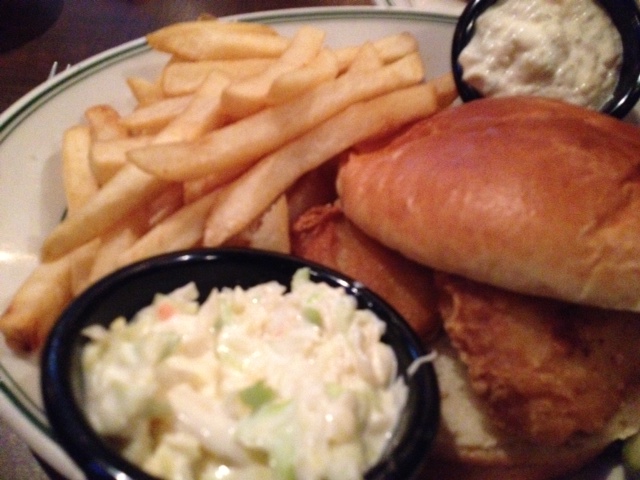 I also enjoyed the cod sandwich, which featured some flavorful, perfectly-battered cod. It was well-seasoned and clearly fresh and the tartar sauce was tasty and definitely house-made. My only disappointment were the limp french fries, which I decided weren’t worth the calories to eat more than a few.

There was definitely no room for dessert, just some coffee to help digest before heading out to the afternoon at the Shedd Aquarium. Gourmet dining? Maybe not. But Miller’s Pub offers a fine taste of Chicago nostalgia in a comfortable environment, somewhere I’m sure I’d visit regularly if I lived nearby. It’s just that perfect place to spend a Sunday morning or afternoon, and hopefully we’ll get a chance to revisit some time in the future.