One Chicago restaurant which came highly recommended to me (both by local friends and foodie forums I visit) was Publican, described as “An homage to beer, pork and oysters”—nothing wrong with any of these things, right? Seasonal, local ingredients are at the forefront of the menu and it all looked delicious to me as I read the descriptions on-line in advance of our trip.

I had made a 7:00 reservation for Sunday night, and ended up arriving about a half-hour early as it was just too windy and cold of an evening to spend much more time walking about. We had a bit of a time directing our taxi driver to the restaurant as it was not easy to see their signage from the street on a dark evening (Publican Quality Meats, across the intersection, was much more clearly seen and our driver kept insisting that had to be where we were going, even though it was clearly closed at 6:30 at night!) The restaurant was not especially full when we arrived so we were able to be seated without a problem – although I found our seating location quite awkward, at the very end of the large communal table that dominates the bright room and flush to the open kitchen.  My partner enjoyed it because he loves watching the action in a kitchen; myself, I found it cramped, awkward and not at all conducive to a relaxing dinner. If I had known in advance I would have requested one of the two-tops in the front of the room for a more comfortable dining experience. 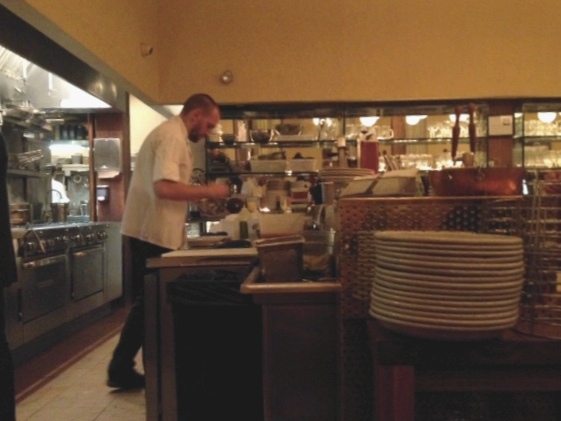 The “view” from our end of the communal table at Publican.

Our waitress brought us the menus and made sure to explain that food was to be served “family style” and designed for sharing. Now, I’m used to “family style” as used in a lot of Italian restaurants, meaning one plate being enough to easily feed 2-4 people. Here it sounded more like family style was being used to mean more like “tapas-style/small-plates” dining, and she recommended we order 4-5 plates to share between us for our dinner meal. With that in mind I thought a good mix would be a charcuterie plate, one fish, one meat, and one vegetable dish, leaving room (if we had any) for dessert or to order more if need be. I let her also help guide me through their extensive beer list to find something to hopefully suit my beginning beer drinker’s taste (I’m only beginning to find that I actually like some beers, especially Belgian Witbier and those produced in that style.) 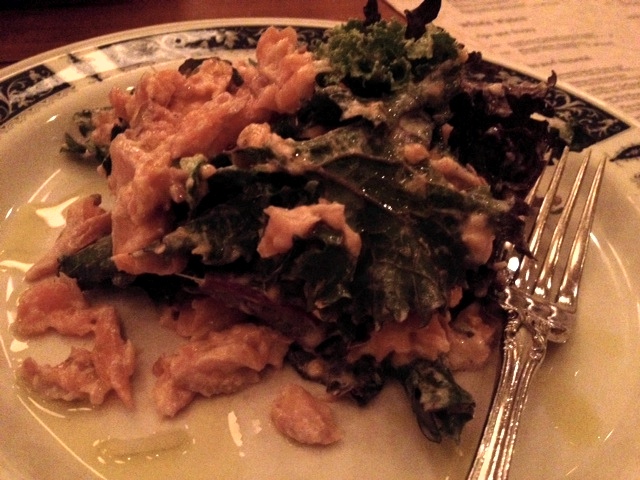 We were also told that dishes would arrive in whatever order they were ready, and the first one out of the kitchen was the smoked arctic char with apples, baby kale and in a bacon vinaigrette. For some reason I hadn’t been thinking “salad” when I ordered this, but that’s basically what it was, and a larger portion than I’d been expecting. It was good, if a little bland and one-note in flavor. Given the ample portion size as well I was glad I was sharing it with someone, as I would have gotten tired of it eating it all on my own.

Next was the half-portion of the charcuterie plate: finocchiona salumi, pork pie, headcheese, country pâté, morteau sausage, pickles & mustards. I enjoyed all of these, especially after requesting some bread to go with the meats (bread is complementary but you have to ask for it here.) Next and also fairly quick to the table was my favorite dish of the evening, the endive salad with parmesan, rosemary and anchovy vinaigrette. Basically this was like an upscale Caesar salad, delicious with the anchovy filets and the endive was a nice change of pace from the typical romaine lettuce. 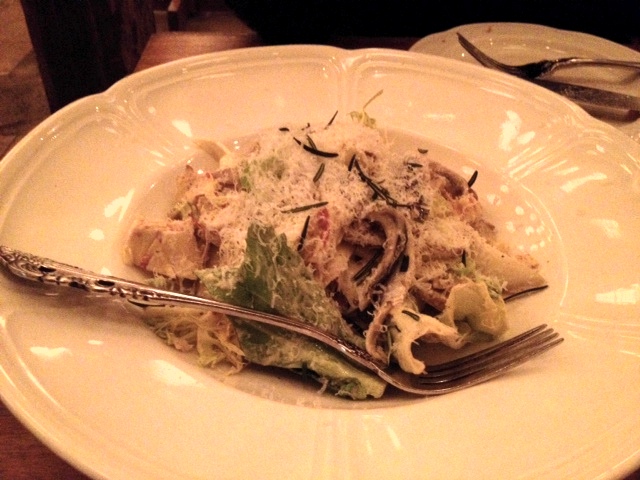 We had a small break before our final savory course came out, which was braised beef cheeks served over creamy polenta and with cippolini onions. This was my sweetie’s favorite dish of the evening, even after he had been hesitant about the idea of beef cheeks. They were very tender and flavorful, and this was a rich dish to finish out the evening. 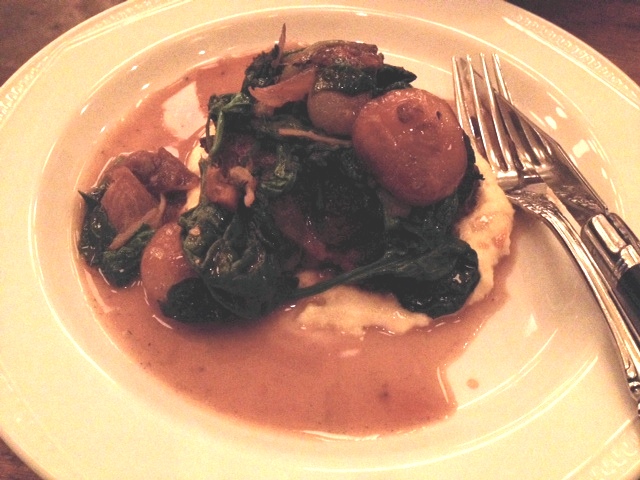 I really was more than full by this point but my sweetie can never pass up a chance for dessert, so we got the apple fritter with pomegranate, apple cider caramel & salted caramel ice cream. I admit was pretty delicious and worth sampling. I went for some “liquid dessert” instead, in the form of “kyle’s after pork digestif”. Featuring a hit of Cynar it was wonderfully bitter and dark, and good for the stomach after so much rich food. 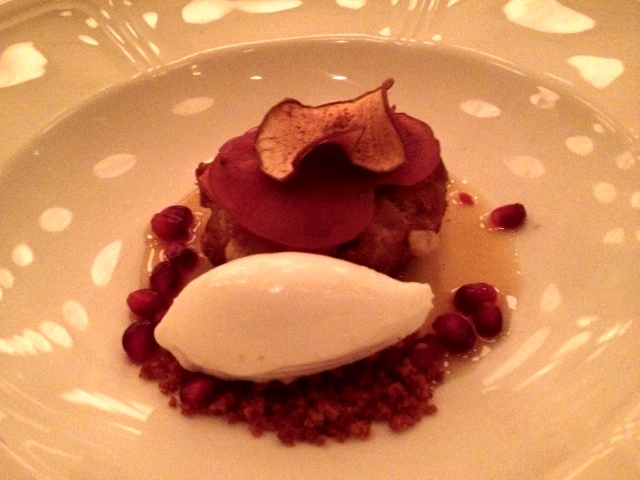 All told, I felt we enjoyed a good meal while at Publican, but I can’t say it was my favorite meal while we were in Chicago. The atmosphere and table set-up seems better suited for a noisy evening sharing plates and drinks with a group of friends than a night out for two, with the business, noise, bright and stark decor, and awkward seating arrangements. I also felt like we were being a bit rushed with plates just coming out as soon as fired and ready, without time to pause between tastes (and then having busboys constantly hovering to remove plates and drink glasses). Our waitress also forgot my sweetie’s second beer order, although that seemed to annoy me more than it annoyed him. Indeed, I think he had a better time at Publican than I did, at least enjoying watching the action in the open kitchen.