Oh Outback Steakhouse, what has become of you?

Okay, okay, I know. Outback Steakhouse is a “casual dining” chain and I really shouldn’t expect much from them based on that. I’m not going in to one of their locations expecting foodie-quality dining and a high-end restaurant experience.

But still. I remember back, 5-10 years ago, when Outback was one of my “trusted” chains. Working on the road as much as I do, Outback was at least somewhere I knew I could go, anywhere I might be in the States, to get a decent slab of protein and a nice salad & veggies. After a few less-than-thrilling experiences in the past year or two I can see that is no longer the case, and I think today’s meal at the Outback Steakhouse in Deptford, NJ was the final nail in the coffin for me.

I’ve been to this particular Outback location numerous times in the past, though mostly in the late evenings after work. So maybe it was a day-shift, Fourth-of-July issue but I just wanted a quick lunch at the bar after a long half-day at work. And it took at least 10 minutes seated at the (empty but for one other person, who had all of the bartender’s attention) bar to even get acknowledged and be able to place my order.

I wanted to try one of the $7.99 lunch specials, specifically the House Salad & Chicken Artichoke Flatbread described on their website as “Crispy flatbread topped with grilled chicken, chopped spinach and artichokes, freshly grated Parmesan cheese and a drizzle of pure olive oil.” Sounds yummy, right? And on their website it looks like this: 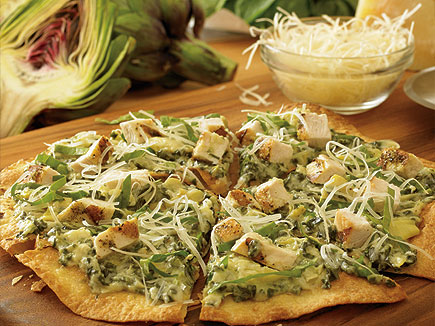 In actuality? This was what I received today: 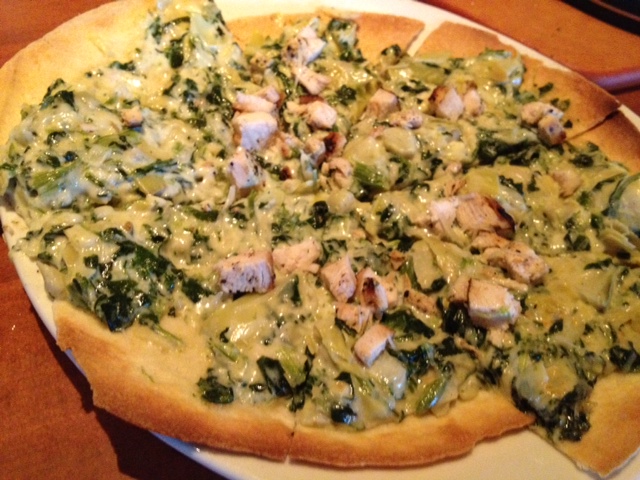 Notice how there are no signs of any fresh spinach or “freshly grated Parmesan” to be found. Also note how the crust was completely broken off on one side and very sloppily cut – some tiny pieces, some large ones, and unevenly warmed-up to boot. I say warmed up because there was nothing about this which tasted freshly-made and not straight out of a freezer. The “flatbread” underneath the lukewarm (yes, lukewarm) cheese/spinach/artichoke globby mess was pretty much inedible: hard and stiff as cardboard, my knife couldn’t even cut through it. The only edible bits of the bread were the edges not covered in the glop. The topping sort of tasted like the same stuff that’s in Applebee’s Spinach-Artichoke dip but without even any decent chips to scoop it up.

Overall, it was seriously, completely disgusting. The only saving grace of the meal was the salad and the side of bread, but not even the salad greens were well-chopped: there were huge uneven chunks of iceberg mixed in with smaller pieces of romaine and huge clumps of shredded cheese.

All told, this was really one of the saddest “casual dining” restaurant meals I’ve had in some time, and nothing that would at all encourage me to come back again to Outback. I would have been happier with a fast food meal. Seriously, it’s sad when I feel regret that I didn’t choose to go to the nearby Applebee’s instead where at least I could have gotten a semi-decent salad or sandwich instead of this disaster on a plate, and not even any decent service, either.

2 Responses to Oh Outback Steakhouse, what has become of you?