A couple weeks ago I posted my first impressions of Kidari Sushi Yatai on South Street in Philadelphia. I had the chance to go back again this week and enjoyed another really lovely meal there – it’s very quickly turning into my favorite lunch spot in the city. 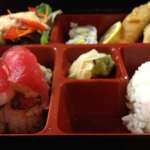 They’re now introduced a great menu of lunch box specials, for those days when you just can’t decide what you want to eat. All priced in the $11-$13 range, they’re an excellent value including miso soup, green salad, veggie spring roll, rice and 2 pieces of California roll. I love spicy tuna roll so I decided to try the Tuna Lunch Box, and it was all delicious. The veggie spring roll was nice and crunchy with a spicy mustard on top, and their salad features a crisp blend of spring mix and fresh veggies. The best of all was the spicy tuna roll, for sure – it was easily one of the best spicy tuna maki I’ve ever had, where you could clearly taste the freshness of the tuna and not just the heat from the sauce it was mixed with.

I also had the chance to try a fabulous special that was featured this week, smoked pork belly and spicy sesame sauce with buns. My goodness this was delicious and took pork buns to an entirely new level! (Forgive me, they were so tempting I forgot to even take a photo before diving in, but you can see it on their Facebook page.) I liked how the lettuce and pork were served separate from the steamed buns, so you could fill them as you wanted and keep everything nice and fresh.

In any event, if you haven’t had the chance to get to Kidari Sushi Yatai yet, what are you waiting for? They’re easily serving up some of the best sushi and Japanese/Korean hot plates in the city right now, and there’s always something else on the menu I can’t wait to try the next time I’m in town.

One Response to Quick follow-up on Kidari Sushi Yatai