Every year for my birthday I like to visit a restaurant that’s been on my “must try” list for ages. This year, that restaurant was Sapori Trattoria in Collingswood. As skeptical as I am about most New Jersey Italian restaurants being “authentic” Italian (and not Italian-American), the menu at Sapori intrigued me by promising some original offerings far beyond the typical Marsala, Piccatta and Parm that typically dominate in these parts. Head Chef Franco Lombardo hails originally from Palermo and worked for some years at the popular and well-respected La Locanda Del Ghiottone in Philadelphia before opening Sapori. All in all, it sounded promising, and overall, I was pleased (if not “blown away”) with our experience.

Ideally I had wanted to go on a weeknight when Sapori offers a 4-course tasting menu for $45, but that was hard for us to schedule. Instead I called early Saturday afternoon to see if I could get a reservation for that evening. Ideally I had wanted 7pm but was offered 6:30 instead, which was okay…I assumed that meant the restaurant would be packed later on in the evening. Curiously, when we arrived it seemed much busier early on with one larger party, and there were a number of empty tables around us while we ate (well past 7pm).

Not a big deal. We had found street parking nearby easy enough and entered Sapori to find an attractive, albeit a bit dark, dining room. The ambiance is meant to invoke medieval Italy with stone floors and walls, dark curtains, wrought-iron decorations, and muted chandelier lighting. We started reading over the menus, complete with the amusing last page which explains a bit about the chef’s philosophy and why you won’t see certain things on the menu. That’s pretty authentically Italian, I thought. David gave it his best “Tony Soprano” look of approval: 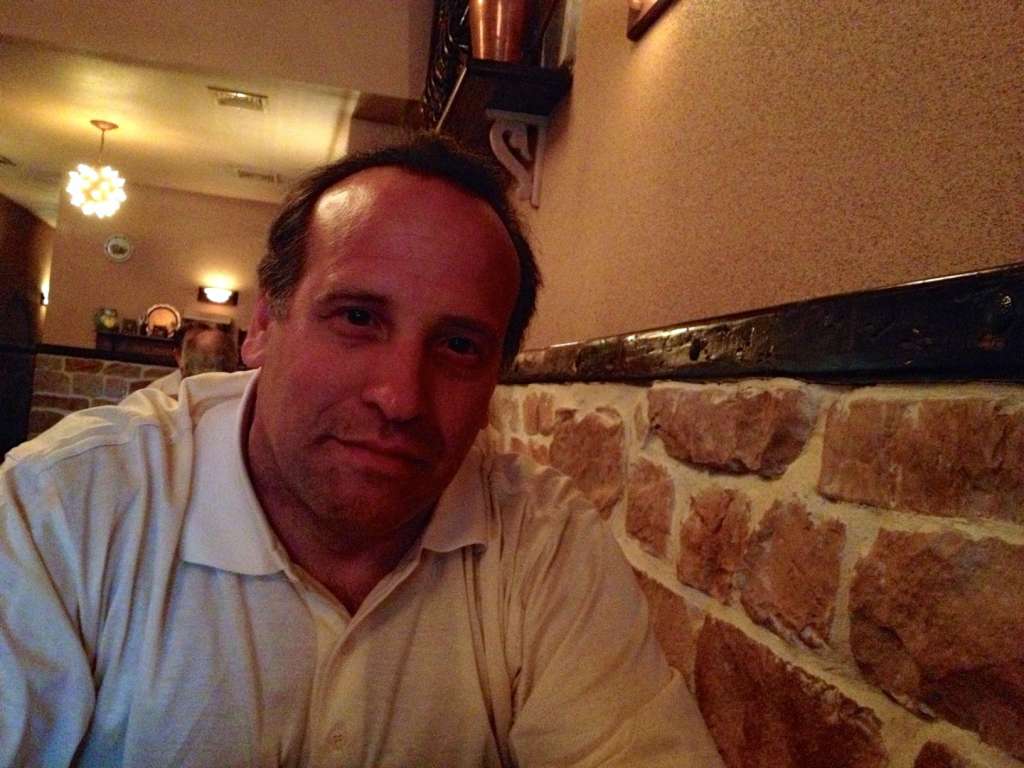 Being it was my birthday, I had brought a rather special bottle of Tuscan red wine to enjoy which we had purchased several years before when in Florence. In retrospect, I should have mentioned to our server it was an older bottle of wine, as he was a bit too quick and rough with his corkscrew – and broke the cork while first attempting to open the bottle. I probably held my breath as he finally slowed down, realized it was an older bottle…and then, thankfully, managed to work the rest of the cork out without getting any in the wine itself. Whew.

Our server read off the specials of the night and it was a difficult decision trying to choose what to order. One antipasti special was grilled stuffed seppie wrapped in prosciutto – I couldn’t resist trying that while David went for his typical favorite to start, the beef carpaccio. While we waited for the appetizers there was some good bread to enjoy, served unusually with a hummus dipping sauce. I have to be a bit careful around hummus because of my garlic intolerance issues but it seemed pretty mild.

My grilled seppie was very tasty, and definitely inspiring – I’m absolutely going to try making something similar at home this summer on the grill. David gave the carpaccio a thumbs up and I enjoyed the very small bite I got of it before he cleaned his plate. 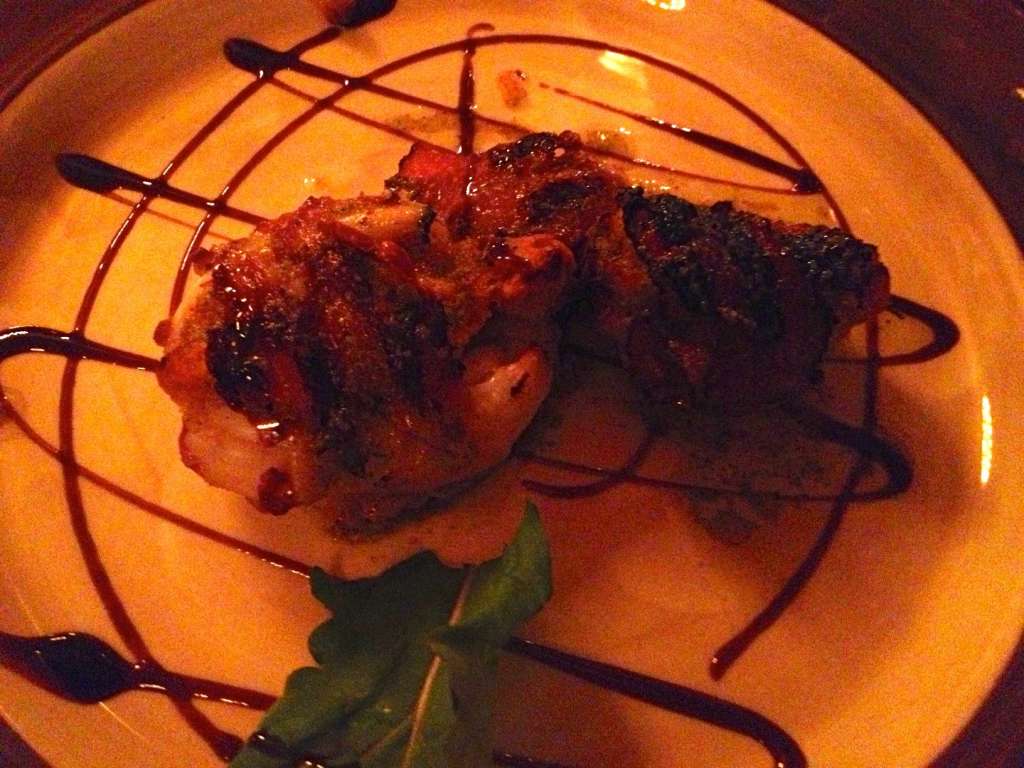 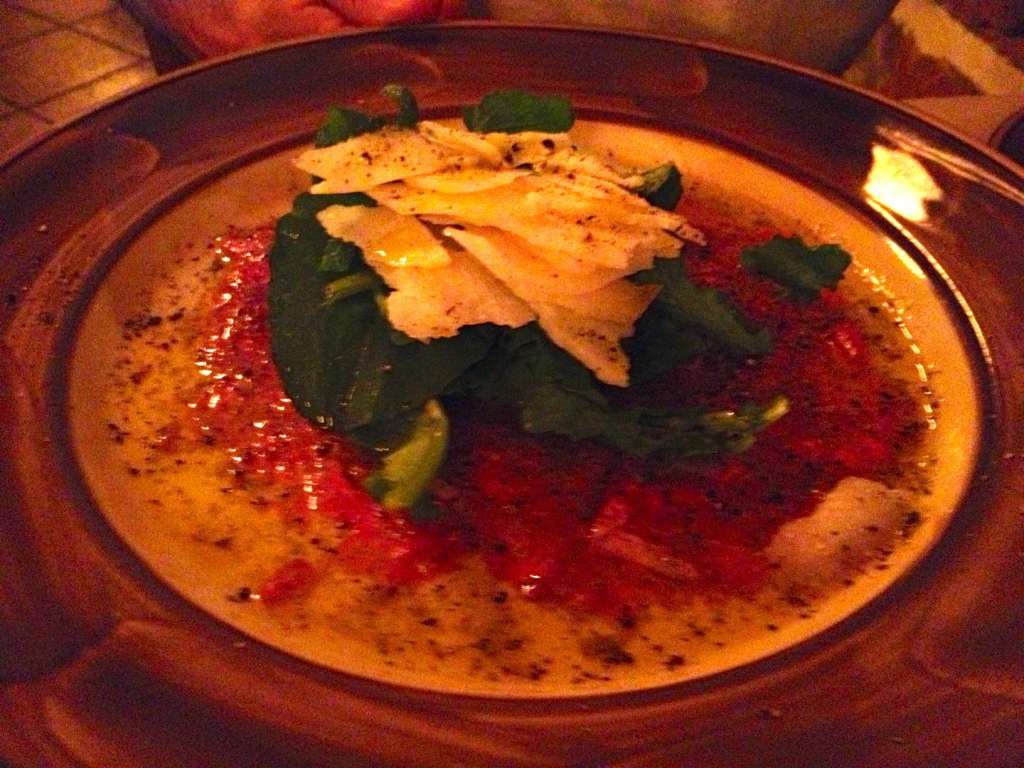 We appreciated that our waiter offered to split a single order of pasta for us to share as a more “Primi Piatti”-style portion than a full dinner. We both wanted to try the “Casarecce con gamberi, zucchine e zafferano” (Diced Maine Shrimp sautéed with zucchine, grape tomatoes, pine-nuts, shallot and garlic in a white wine-saffron sauce, tossed with casarecce pasta). This was very clean and light in flavor and a perfectly fine portion size to enjoy before our main courses. 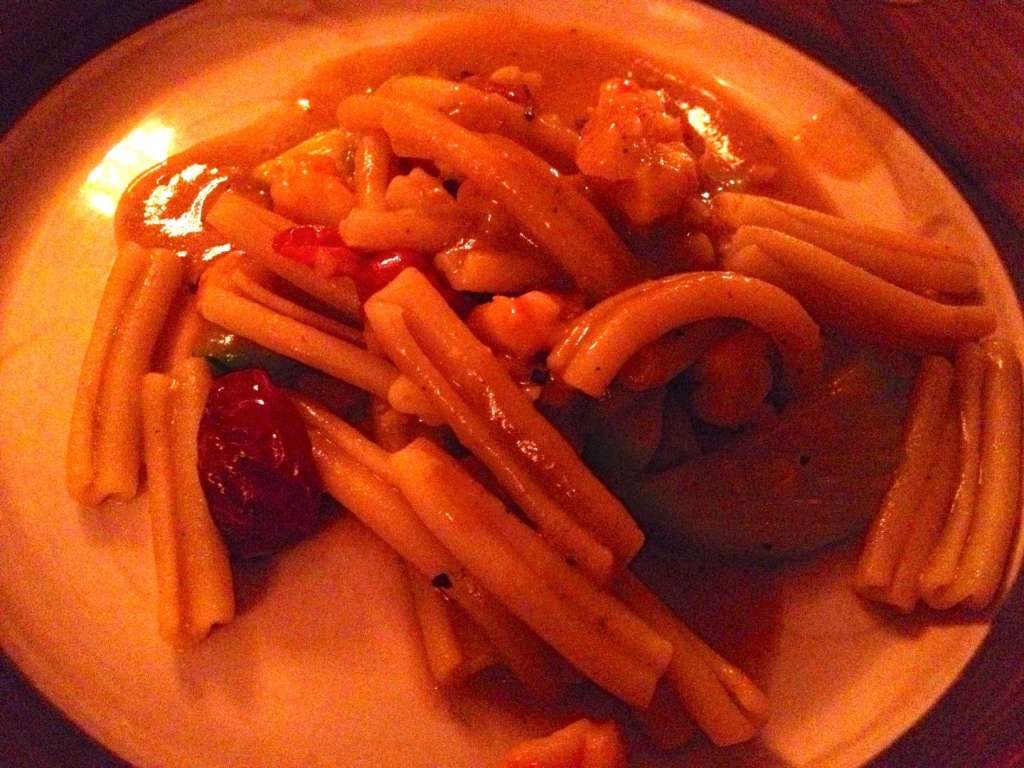 I had a craving for steak that evening so I chose the Scaloppine di manzo (Tender filets of grass-fed beef hanger steak, flash seared and topped with a barolo reduction-dried cherry sauce, served next to red beets and mascarpone flavored mashed potatoes.) That’s a mouthful of a description and it matched the rich flavor of this hearty dish. The hanger steak was cooked just to the temperature I wanted and I liked the sauce…too bad the lighting was so dark it was hard to get a photo that really showed this dish off more attractively… 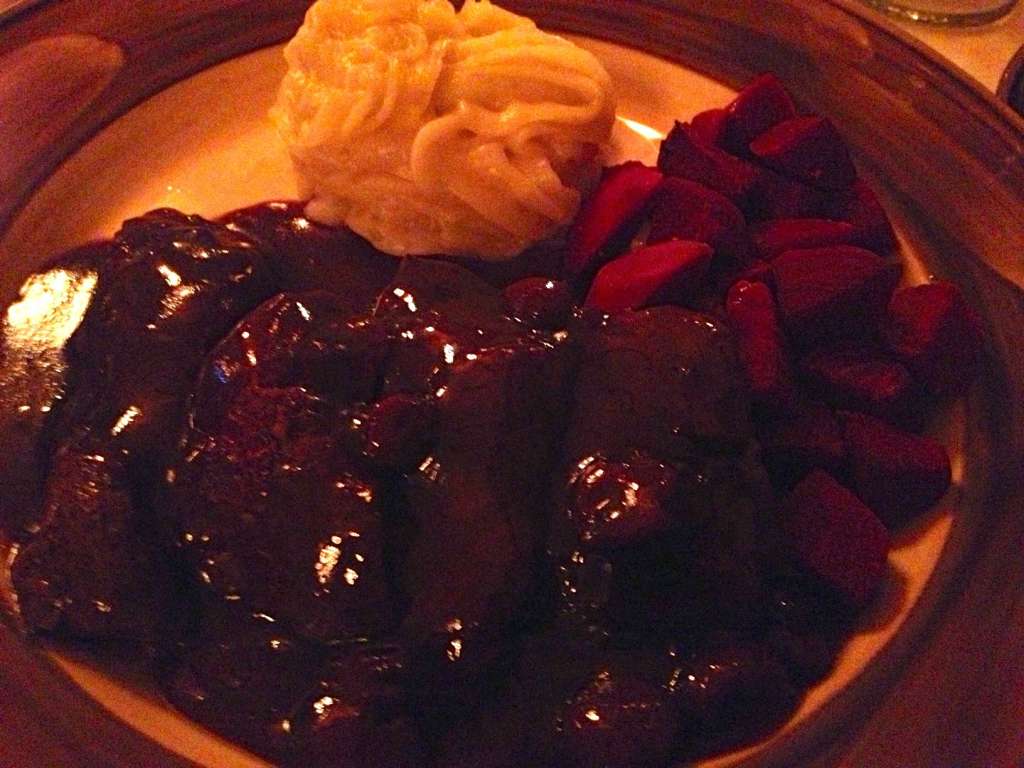 David had the Maiale alle mele: pork medallions pan-seared and topped with a yellow apple-scallion-pancetta-demiglaze touch of honey sauce, served with the same mashed potatoes and beets. He enjoyed it, I’m not sure the beets were as good of a vegetable choice with his pork as with my steak. 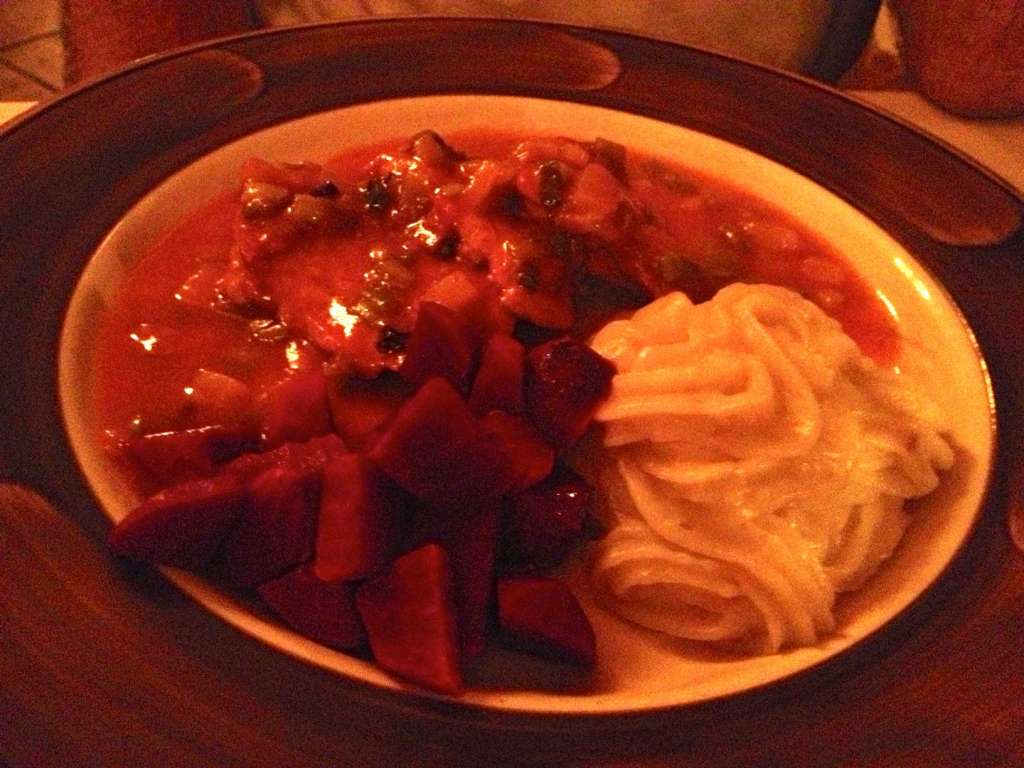 I know we shared and enjoyed a light dessert afterward but regrettably I can’t recall the specifics of it – I think I was just a bit too full from the rich meal to completely appreciate it by that point.

Did I enjoy the meal overall? Assuredly. For this area of South Jersey, Sapori definitely offers Italian dining that’s a cut above the competition in authenticity and originality of offerings. Was it as phenomenal as perhaps I’d been hoping for? Not quite. The meat dishes were maybe a little heavy on the rich sauces for my taste, but I’d put the meal overall on level with many of the Italian BYOBs in Philadelphia where I dined in my years living in the city. I would go back again sometime for sure to try more offerings of the menu and I do want to try the tasting special on a weeknight, to really see what’s the best that Chef Lombardo has to offer.