5 Days in Lansing, Michigan: Quick Bites and a Return Visit

Over this past Memorial Day weekend, I went on my annual “pilgrimage” to MediaWest*Con in Lansing, Michigan. I’ve been attending (and dealing) at MWC for over 15 years now – scary to realize, and only have missed perhaps two years during that time. But it’s only in the past few years I’ve been at the con with my own wheels instead of flying in, so I can drive around and eat away from the convention hotel and walkable restaurants.

In the past, the convention was held at the Lansing Holiday Inn South/Convention Center (then a Best Western, then a Causeway Bay…). This year the convention moved back to its older, former location at the Ramada Inn on the West side of Lansing, so I had some new territory to explore. Some of it turned out to be good, some meh, some worth traveling back to the side of town to enjoy….

I ended up having two meals right on-site at the connected (but independent) Finley’s American Grill. Finley’s has several locations around Michigan but I’d never been to one of their restaurants before. Overall, it was pretty much your standard Applebee’s/TGIFridays/Houlihan’s-type place, but I’d say with a better edge because it is a local chain, not nationwide. The first night I had their Michigan Cherry Chicken Salad of grilled chicken over greens, red onions, dried cherries, and sugared walnuts with blue cheese crumbles. It was an addictive combination and a really tasty, simple dinner salad. I was also impressed that my bill was less than $30 for sitting at the bar to have the salad and, well, let’s say SEVERAL glasses of decent red wine (look, I’d just driven for 13 hours…I needed some serious libations.) On the day of my drive home, I went back for a late lunch of their Reuben Melt, which was well-made and served with some tasty homemade potato chips. Fancy food? No, but definitely satisfying and two meals I couldn’t really complain about given my expectations.

The second evening of the convention I was stuck hanging out near a local car repair shop as I had to get my tires and alignment checked (after driving through a massive pothole in the Ramada parking lot and dragging around a traffic cone for a bit…don’t ask). I ended up eating at Los Tres Amigos on West Saginaw, since it was walkable from the car shop. And that meal reminded me of why I’d only gone to the Los Tres Amigos near the previous MWC location on South Cedar Street ONCE. In all of 15+ years. The margarita was the most off-tasting, chemical and weird version I think I’ve ever had in my life…and served WARM to boot! I literally had to add copious ice from my water glass to make it at all drinkable (only because I needed the alcohol while waiting for the verdict on my car). Really, how hard is it to squeeze some fresh limes instead of using a chemical-laden margarita mix? Nasty.

The free chips and salsa were okay, but my server didn’t even get my order right. I wanted the Camarones a la Diabla and ended up receiving the Camarones al Mojo de Ajo instead. Which, I could have complained about but the server admitted she was new and probably wasn’t paying attention when I pointed to exactly what entree I ordered. And I hate seeing food wasted, so I just ate it, served as it was with some pretty pedestrian Mexican rice, guacamole and shredded lettuce. Oh well, two meals at Los Tres Amigos now is more than enough for me. I won’t make the mistake again.

The next night I definitely needed something better and was craving some sushi. I’d seen there was a place nearby which received overall positive reviews, Sushi Moto. Sushi Moto doesn’t look like anything from the outside, but inside it’s a rather charming and attractive Japanese restaurant that appeared promising. I decided to sit at the sushi bar while I looked over the menu, which was heavy on Americanized, non-traditional fancy rolls (“Jalapeno, Cream Cheese, Green Onion, deep fried with Eel Sauce and Spicy Mayo” just for a sample). But I just wanted to stick to the basics – some agedashi tofu and an order of chirashi, please. 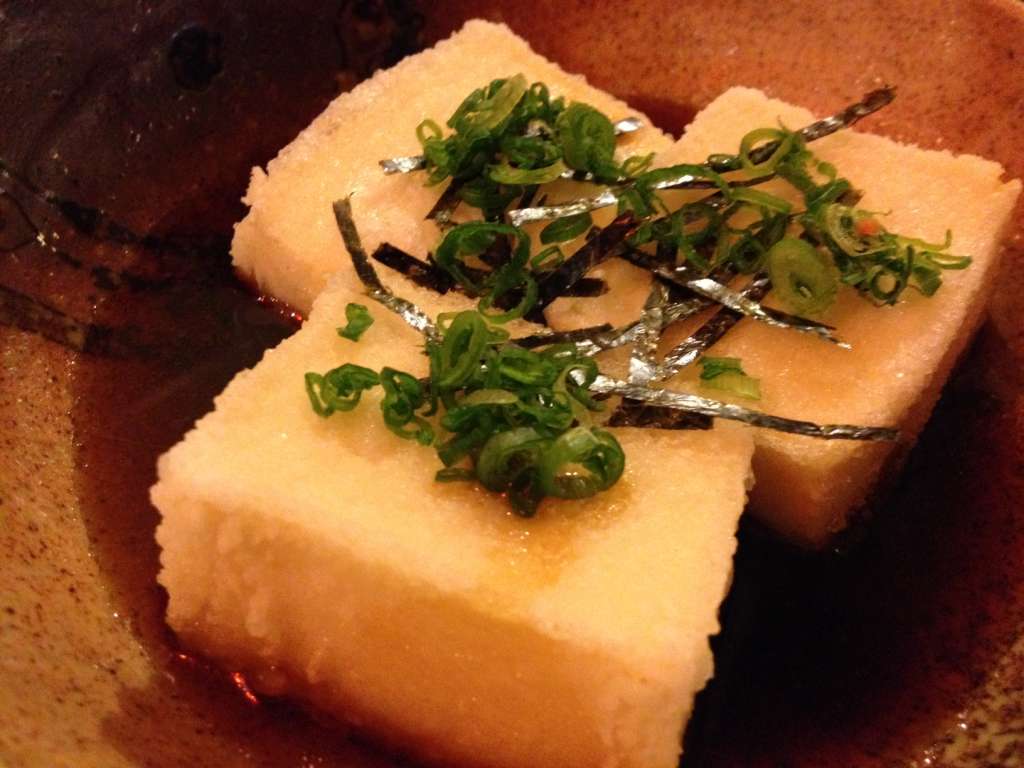 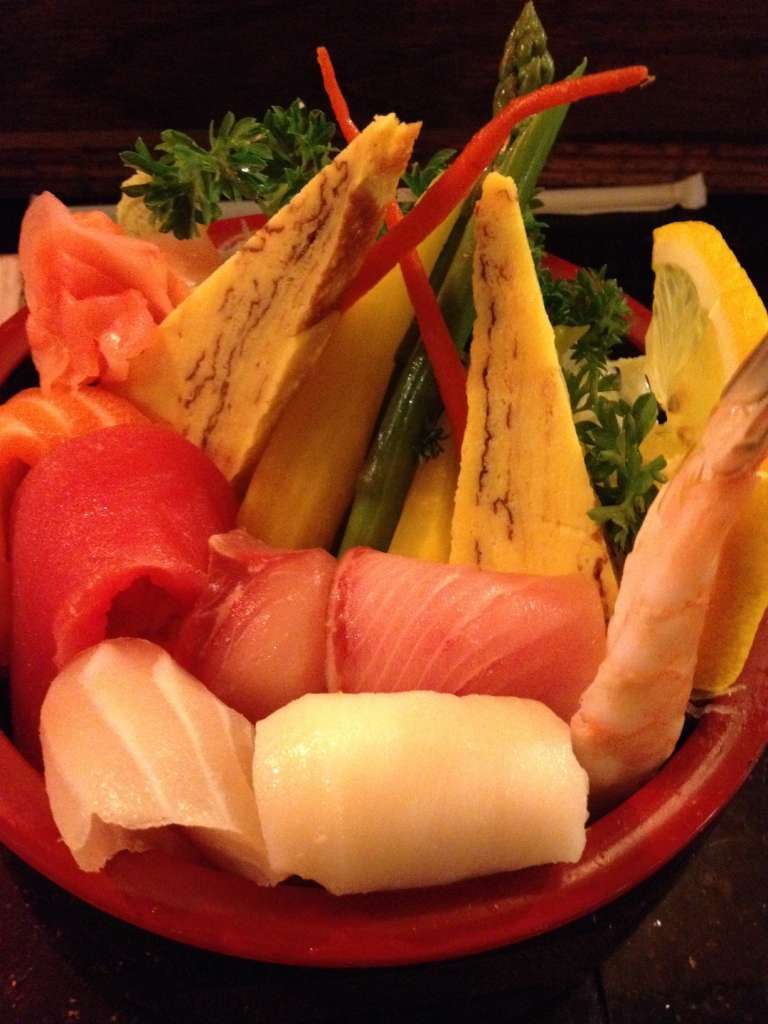 The agedashi tofu was decent – fried nicely with a good broth, although the tofu could have been better quality and freshness. It tasted a little chemically, that is, certainly not fresh-made. The chirashi was “just okay”. No chirashi-expected seasoning on the rice, a little skimpy on the fish, and a few of the pieces were a bit chewy/not as well sliced as they should have been. I did appreciate the inclusion of the pickled vegetables, however, and the tamago was good. The sushi chef was also nice enough to give me a free taste of some spicy tuna and avocado nigiri (this is why you sit at the sushi bar as a solo diner) which I enjoyed more than my main order…maybe this is a place to just stick with the fancier maki rolls and skip the basics.

The chirashi also came with a standard bowl of miso soup and green salad, both of which were okay but not memorably good. All in all, Sushi Moto was decent enough for what I’d expect in the midwest for sushi and Japanese food, better than others I’ve tried, but not nearly anywhere as good as the place I’d be visiting the next night: Sansu Sushi.

Going to Sansu Sushi has been a MediaWest*Con tradition for me for about 4 years now. It’s not only the best (in my opinion) Japanese/Korean restaurant in the Lansing area, but it’s one of my favorites in the entire country. I’ve reviewed them in detail before, and have tried quite a number of things from their menu by this point. Even staying on the west side of Lansing this year, I simply had to take the drive east to go to Sansu, and I was, as always, fully satisfied with the meal.

I was tempted to get their chirashi deluxe, as it’s so spectacular and would wipe away the night before’s ho-hum memory. But then I saw they had a special of Spicy Pork Belly on the menu and I couldn’t pass that up – even if it meant skipping out on ordering much of any sushi. I did get a Spicy Scallop hand roll, however, which was perfection and reminded me just why I love Sansu so much. Clean flavors, fresh fish, perfect rice and just delicious. 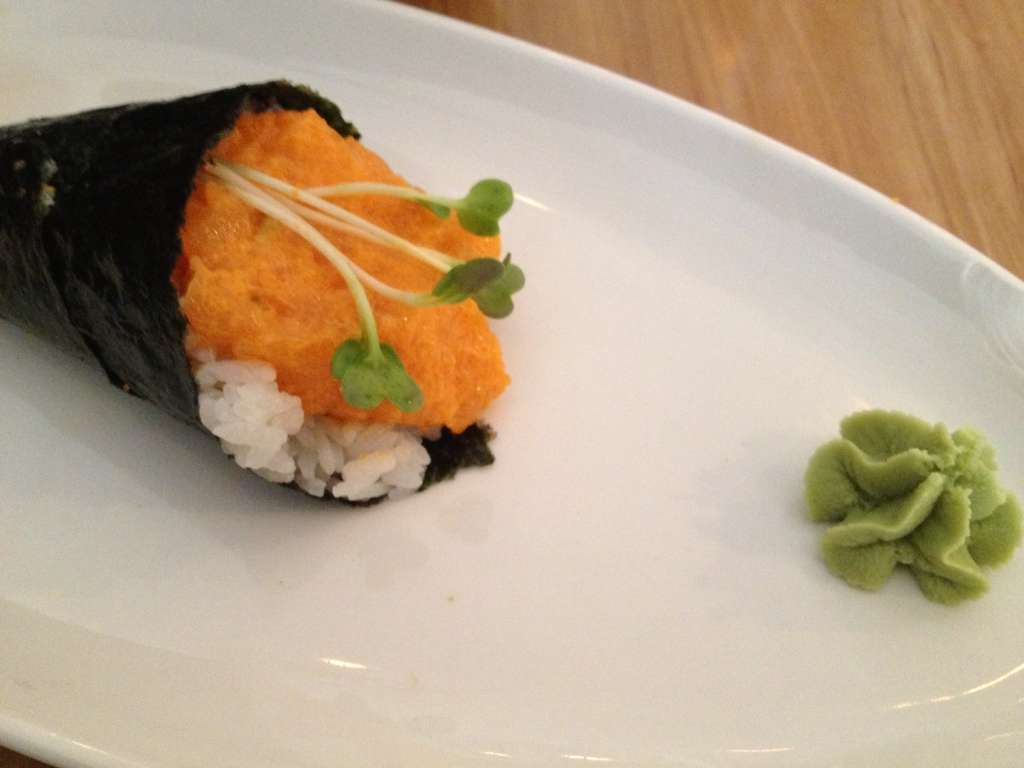 When the pork belly arrived, the plate was enormous! Just spilling over with delicious hot and spicy slices of tender pork, stir-fried onions, green peppers and jalapenos. The cooling salad with creamy dressing was a great counterpart to the pork, and I ate as much as I could. What a shame my hotel room didn’t have a mini-fridge, or else I could have easily taken back the leftovers for lunch the next day. 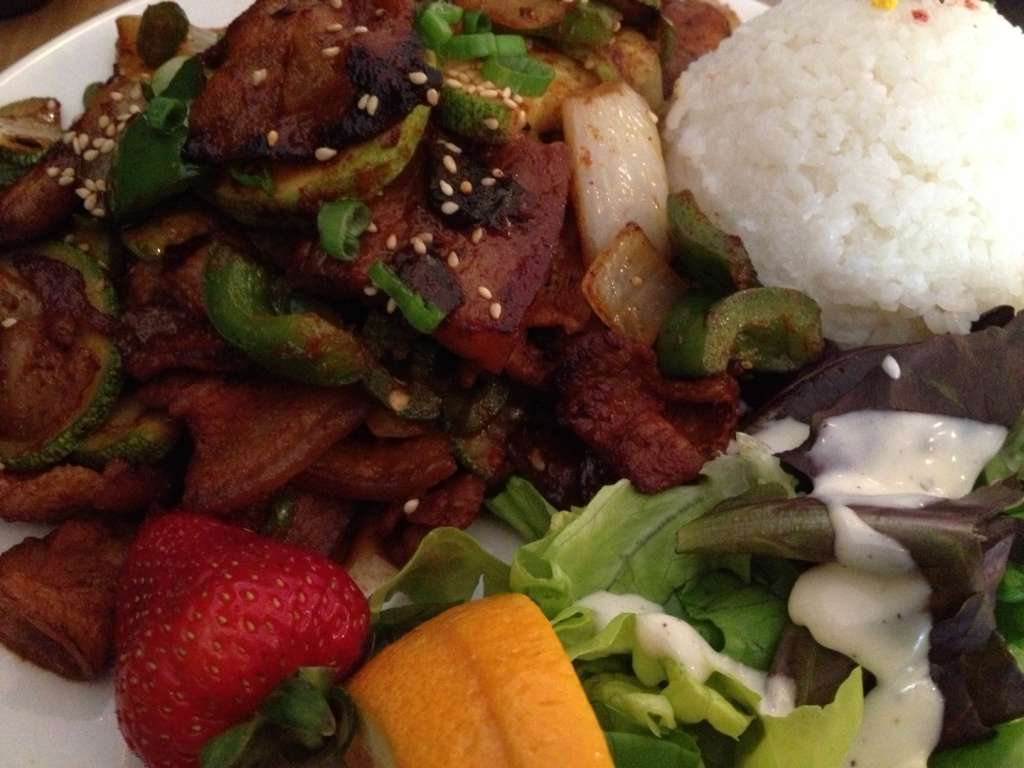 All told, the highlight (food-wise) of the trip was definitely Sansu – no surprise there. I might return to give Sushi Moto to give them a second try next year, especially if I can find a few friends to come with me so we can sample a few different fancy rolls. But I’ll have to keep exploring to see if there are any other, better options in the area in case I don’t want to just make the trek to Sansu every night if I really want to eat well…