We spent the bulk of two days at the Ringling Estate in Sarasota, exploring not just their impressive art museum and attending a conference on Paolo Veronese but else enjoying the lush estate grounds, touring the Ca’ d’Zan Mansion and the Circus Museums (because yes, the Ringling in the museum name is THAT Ringling, from the Ringling Brothers Circus.) 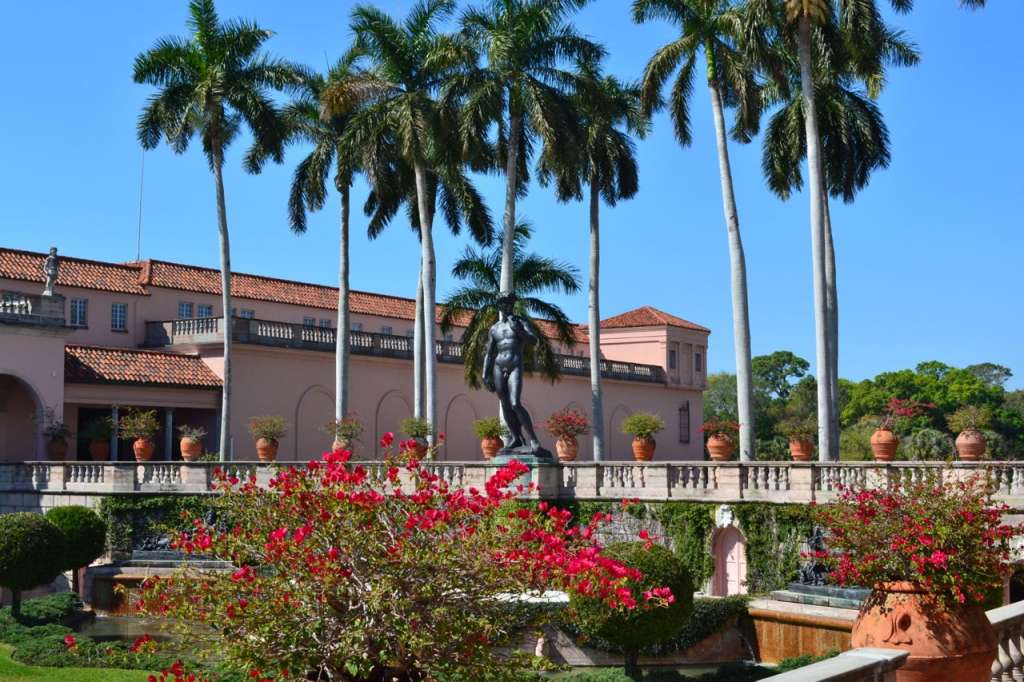 There are several dining options on the Ringling Museum grounds, but for those looking for more than fast food and a coffee shop, the Treviso Restaurant is your main choice. I was definitely curious to check it out as the Italian-themed menu looked quite nice for museum-dining fare, and reflected much of the Italian atmosphere of the Ringling Estate overall. Overall I’d say it was a nice place to have lunch, but perhaps not “destination dining” on its own.

Our first day having lunch at Treviso, they were incredibly busy so we were stuck with pretty much the last table available, right next to the kitchen entrance. Not exactly the greatest location, but I will say our server was very nice and acceptably efficient given the lunchtime rush crowd. The lunch menu features an assortment of salads, sandwiches, pizzas and also a few pasta choices; I was tempted by a pizza that sounded quite authentically Italian, topped with mortadella, capers, mixed greens and balsamic vinegar. I had to smile when the waitress made sure to ask if I knew what mortadella was – apparently some vegetarians have ordered the dish in the past without realizing it was an Italian cured meat! But I must say it was a surprisingly good and clearly fresh-made pizza in true Italian style: thin crust, crispy without being burnt, and topped just enough to be filling without feeling overdone. 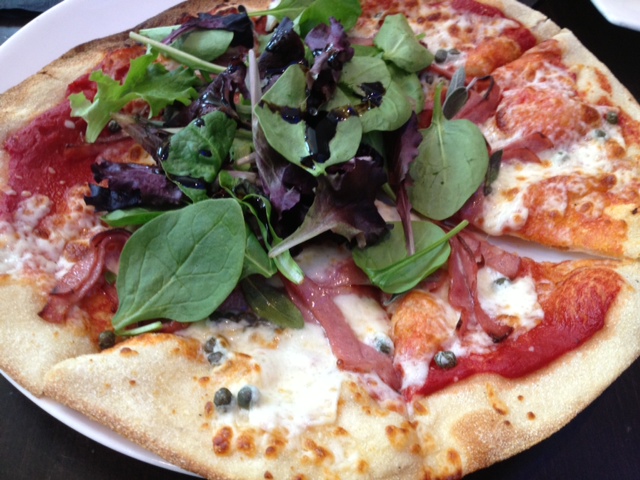 I had read good comments about their grilled Grouper sandwich online, so the sweetie ordered that – and it was very good indeed! A nice sized fillet of grouper well-grilled and served on toasted fresh bread with an avocado dressing on the side. I snuck quite a few bites of this myself and thoroughly enjoyed it, along with the refreshing house Pinot Grigio from their wine list. 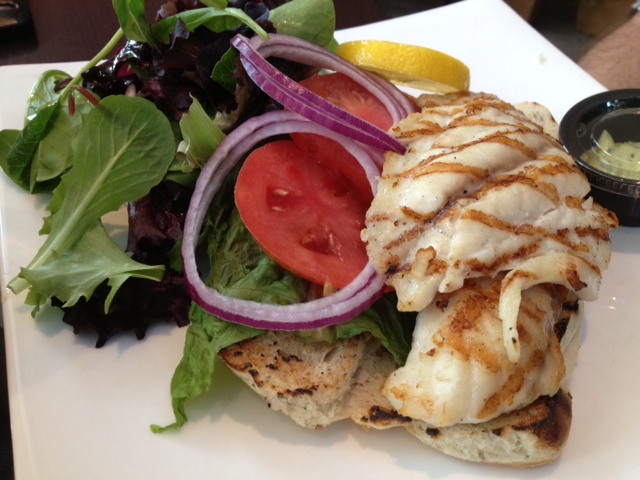 The next day we returned for lunch, quite hungry after a full morning of lectures. We were able to get a table out on the balcony this time, which was much preferable as the view of the lagoon and grounds are very peaceful and relaxing. The lagoon had a bit of a funky smell to it, however, which occasionally wafted across in not exactly pleasant ways. 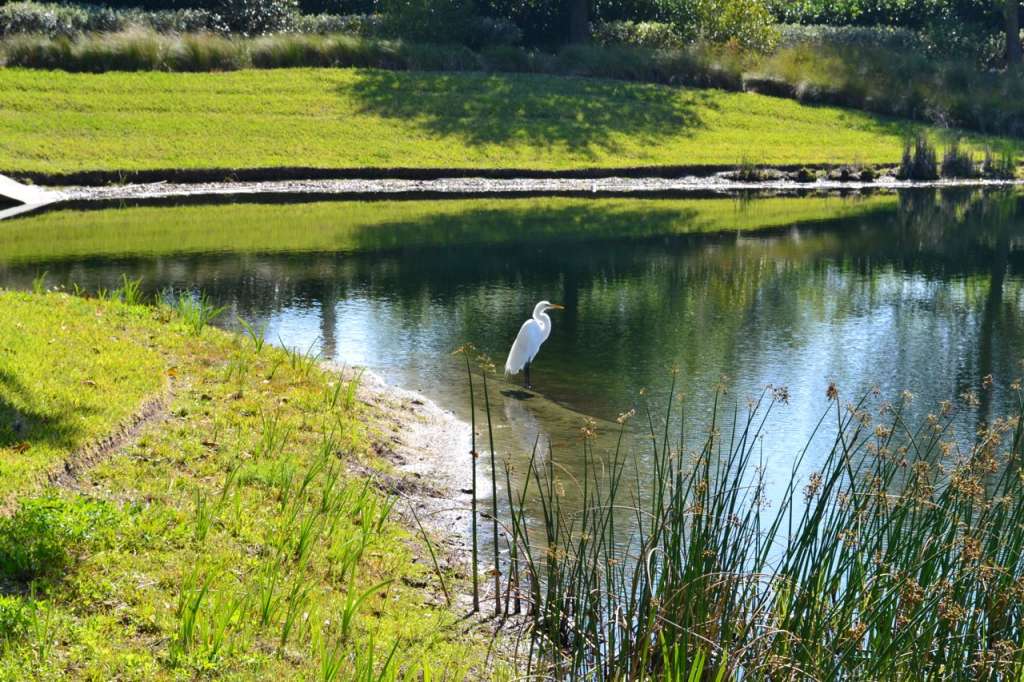 Pretty lagoon. Not so pretty smell.

Our service was a little shakier this second meal, as the staff seemed harried serving out a prepared set luncheon menu for some of the conference attendees who had pre-paid for it. The house bread, which we’d enjoyed thoroughly the day before, took several requests and did not arrive until we’d already received our luncheon entrees. Indeed, I thought our waitress had forgotten my request, so after 10 minutes or so of waiting I asked a passing waitress if she could please bring some to the table as others were getting refills and we’d never received any at all. Then of course our waitress finally arrived with the bread – and the other waitress gave me a bit of a dirty look when she came out a minute later with some more. I mean, it’s not like other tables weren’t waiting to eagerly have some bread, too…

I wasn’t as crazy about my luncheon choice the second day either (and I forgot to take photos as we were so hungry we just dove in to eat.) I ordered the “Stacked Caesar with shrimp” which, given the price, was pretty skimpy: maybe 6 large Romain leaves “stacked” with a bit of dressing, some croutons and shaved cheese, and a small skewer of shrimp. I just was expecting something a little “more” than that for the price, and the presentation didn’t really make it easy to enjoy the combination of Caesar elements in one bite. I liked the sweetie’s Chicken Pecan Salad better, but again it seemed like a small portion for the $12 price tag, like it should have at least come with some more mixed greens or something.

Better on our second meal was the dessert (which we both had room for since the entrees had been on the smaller side): the Chocolate Bacio Tartufo which was thoroughly decadent, more than enough for two, and quite satisfying before spending a few more hours touring the museum and grounds. 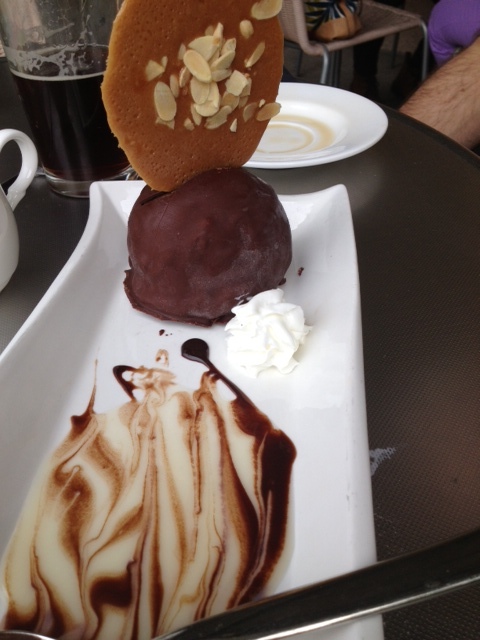 Overall, I’d give Treviso a decent rating for a museum restaurant: the food is fresh, the wine and beer selection is nice, and the location is pleasant for taking a breather from “inhaling” all of the art, environment and information at the museum. I just think they could use a little tweaking in the presentation of some of the dishes and in the service to make it run more smoothly, and so that the dishes weren’t a bit of a hit-and-miss in their success.