The sweetie was understandably skeptical when I said there was an Italian restaurant in Sarasota I really wanted us to check out while on vacation. Florida isn’t exactly where one thinks of as a great destination for authentic Italian cooking, but in doing my pre-trip research I’d been intrigued by a place called Bologna Cafe. The website might look like something you’d find on Geocities in the 1990s, but the menu was very tempting, particularly with the promises of “Everything Homemade!” and that “We import directly all the ingredients that we use to prepare our Dishes”. Reviews online seemed to agree that Bologna Cafe was worth visiting and felt “authentically Italian”, so we decided to go for it – even if it meant an extra drive out of our way after a day-long conference at the Ringling Museum.

I have to say I am so glad we did! Bologna Cafe was truly like finding a genuine slice of Italy on the Gulf Coast of Florida.

Bologna Cafe does not look like much at all from the outside – driving by it’s easy to miss, set in a small stripmall and with just a few tables outside. The inside of the restaurant is dominated by a large deli case, of all things, not exactly what you might expect to find in a high-end restaurant. But the atmosphere was hopping and we were lucky to arrive without reservation just as one table was clearing out. We settled in to read the menu while hearing Italian flying back and forth between the waiters, kitchen, and the gentleman behind the deli case who was busy slicing cured meats and cheeses for antipasti plates. These all seemed to be good signs! 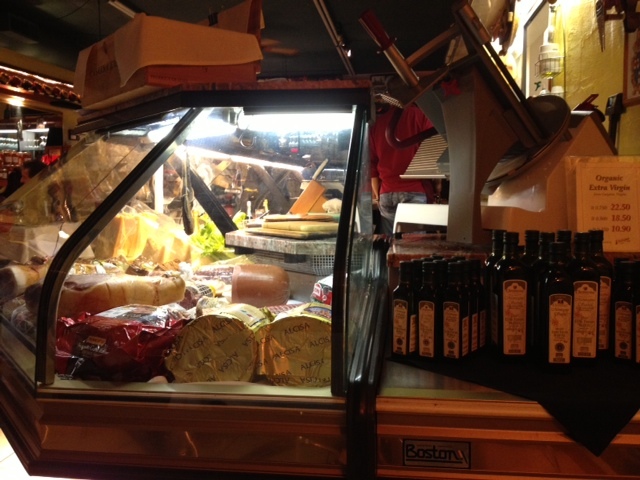 The Bologna Cafe menu is not extensive, but very much as one would expect to find in a trattoria in Italy. I knew we had to try their house-made mozzarella cheese so we ordered the Caprese Salad for two, to start. Our waiter asked if we’d like to add any prosciutto to that…why not? What arrived was literally a “fountain” of prosciutto cascading out of fresh ricotta, mozzarella, olives, basil and tomatoes. Delicious! The only quibble was the out-of-season tomatoes were not quite up to our finicky “Jersey fresh” standards. Still, it was wonderfully refreshing with the perfect Italian Trebbiano d’Abruzzo bottle we’d ordered, and the typically dry Emilia-Romagna-style bread on the table. 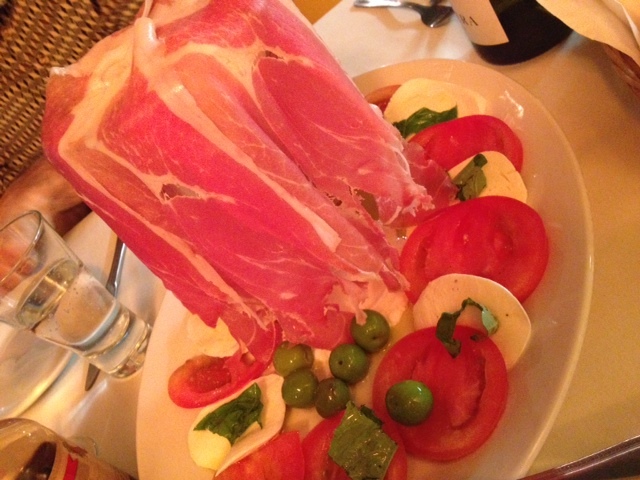 As we’d had a fairly filling lunch earlier in the day, I wanted to stick with a pasta for dinner, especially if it was freshmade as promised. I had to try the Spaghetti alla Chitarra alla Carbonara, prepared (as it should be!) with “Eggs, Cheek Pork, Pecorino, Black pepper”. One bite and I truly did feel as though I was back in Italy! A richly flavored sauce over still firm, fresh noodles, just the right portion size as well (I’m sure many American diners would say too small…but this ain’t the Olive Garden.) 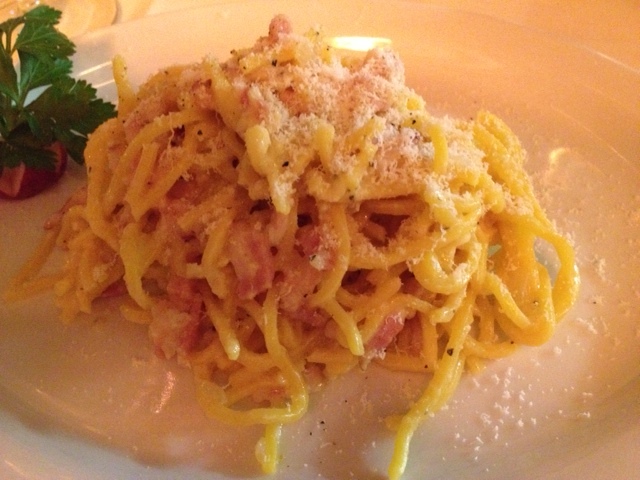 David went for the Scaloppine all’Arancio e Cipolla (Veal Scaloppine in Orange and Onion sauce) which was equally delicious and authentic in taste and presentation (note that as in Italy, meats are served as a “secondi” – meaning a smaller portion, by themselves. Pasta is really meant as a “primi” first course, and vegetable sides must be ordered separately). 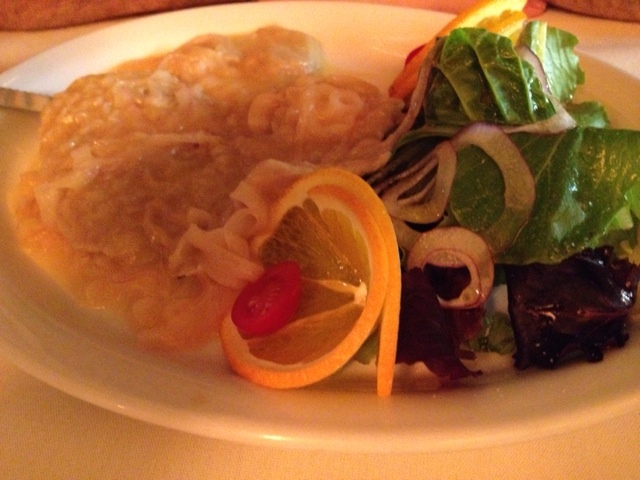 We actually had room for dessert – and were enjoying our meal too much at this point not to linger. We went for Vin Santo e Cantucci (Biscotti with Dessert Wine from Tuscany) and also the Chocolate Panna Cotta. With two double espressos it was the perfect way to end the night. I just about wanted to kiss the chef! 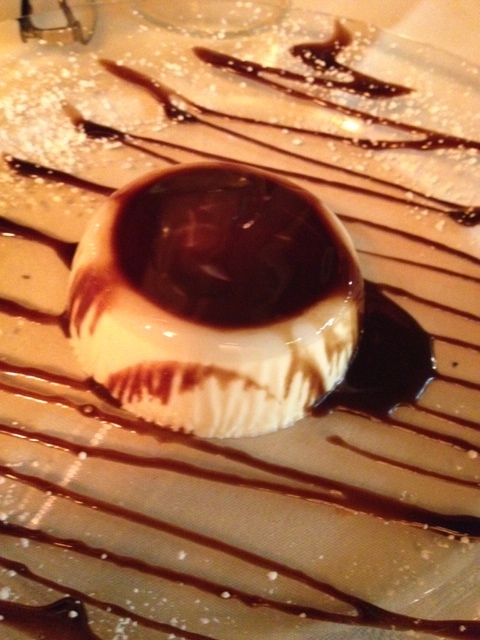 Dinner at the Bologna Cafe such as we enjoyed was not inexpensive – I believe the bill was in the $170 range before tip. But, with such excellent quality ingredients and house-made perfection, and with the great bottle of wine, I considered it a fair price to pay. I would absolutely return here again and honestly felt the quality of the meal beat out much of what is served in our “fancy” Italian restaurants in the Philadelphia/South Jersey area. Do give Bologna Cafe a try should you ever find yourself in Sarasota and you won’t be disappointed.