So I’m just back from a great 5 days in the St. Petersburg/Sarasota area of Florida – therefore expect a series of restaurant reviews incoming. The first restaurant I’m going to talk about is Ceviche Tapas Bar & Restaurant, where we ended up for our first dinner while in downtown St. Petersburg. We were both extremely hungry after a long day in transit with little real food consumed, so the sweetie picked Ceviche based on their very lengthy menu posted outside. But I have to say it was a great choice, as the food was quite good as well as being plentiful and well-priced for the feast we ended up enjoying.

The weather was still a bit on the cool side when we arrived in Florida, so we chose to dine inside. We were there fairly early in the evening – perhaps just past 5 o’clock, so we had no problem getting a table and it was rather quiet inside. (That would change by the time we left several hours later!) We were quickly attended to by our waiter, who explained how the menu was broken down into cold and hot tapas plates, some available in double/larger orders as well as tapas-sized.

Ceviche, as mentioned before, has a really HUGE menu – it takes some time to read through it all, and it’s worth taking that time as there are some unusual offerings mixed in amidst the typical tapas plates. It was a bit overwhelming trying to figure out how much to order – a problem I always have with so-called “small plates” restaurants. I asked our waiter for his advice and he said 4 plates per person “at least” should be a good amount – less than that and we might be hungry for more, although I began to be concerned we ordered too much when he assured us our eventual choices were definitely enough (we went for 9 plates, and ended up getting one extra because of a mis-delivered plate to our table).

In any event, as typical with a tapas restaurant we were told plates would arrive as they were ready, not in any particular order. That ended up being fine as overall the plates came out at a good pace, not rushed as I’ve sometimes had happen or with long lulls between plates. First we received what ended up being a mis-delivered plate of grilled vegetables – in retrospect I should have assumed it wasn’t our plate but it was hard to tell if it was something meant to be brought out with the bread I saw on other diners’ tables (bread we actually never received ourselves, I should mention…though we had so much food coming I never complained or asked about it.) The vegetables (red onion, asparagus, squash, mushroom) were well-grilled but dressed with a heavily-garliced pesto that had me wary it might upset my digestion given my garlic intolerance. I let the sweetie have most of it. 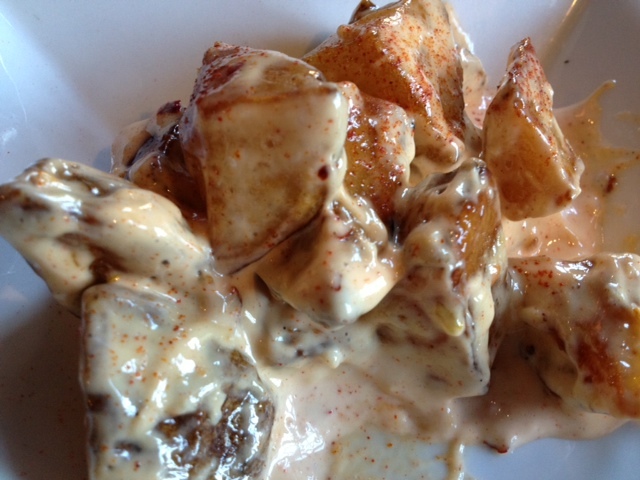 I couldn’t NOT order their Patatas Bravas (Fried potatoes in spicy homemade aioli) and these were outstanding – worth the risk of digestive upset I knew I was facing from their garlicy sauce. Dare I say these put similar potatoes I’ve had at Jose Garces’ famous tapas restaurants in Philly to shame? I think I will. They were so good. 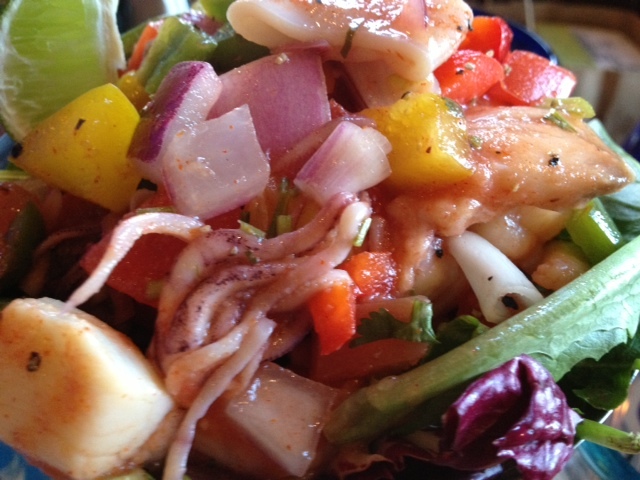 We ordered two of their namesake ceviche dishes, assuming they had to be up to par – and they very much were. First was their Ceviche de la Casa, which featured a wonderful mixture of shrimp, scallops, squid and white fish marinated in lime juice and tossed with colorful bell peppers, onions and cilantro. I had to go with the Ceviche a la Rusa, which featured 3 magnificent oysters served topped with caviar, peppers and a shot of vodka. Perfection? Oh yes indeed. 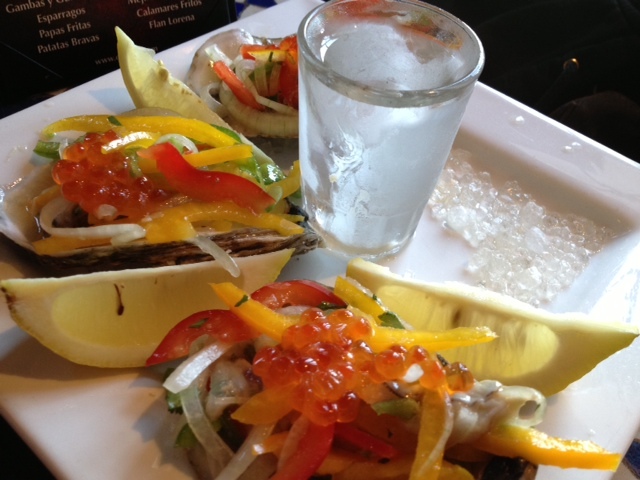 Next up was the sweetie’s favorite plate of the night: Boquerone (fresh anchovies on crostini). Woe that there were only two pieces of these as I think he could have eaten at least a dozen! We also had a nice light salad of Corazones de Alcachofas (Marinated artichoke hearts, sweet onion, hearts of palm and caper berries) – simple yet delicious, one of those recipes I want to make at home soon if I can figure out how… 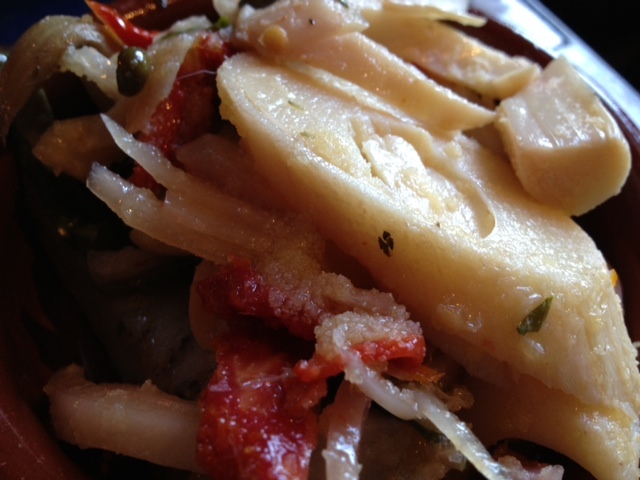 After that it was time for the hot tapas – which is where I think we definitely over-ordered a bit, but I did not expect the dishes to be the sizes they were for the price (all under $10). I really wanted to try the Higados de Pollos – crispy chicken livers, mushrooms and smoked bacon in a Spanish sherry sauce. I couldn’t believe the huge casserole dish that arrived, and this was the “small” size plate. This was a dish that really benefited from sitting on the table for a while to allow the delicious sauce to soak in to the chicken livers. At first, the liver taste was a bit strong (even for this dedicated fan) but as they began to blend in with the tomato-sherry-garlic sauce, the flavor became absolutely delicious. Sorry I didn’t get a photo! 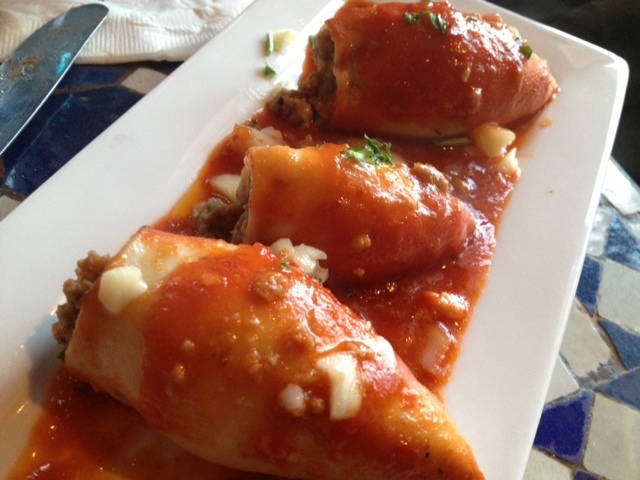 Next was the Calamars Rellenos – Braised squid stuffed with veal and chorizo in piquant tomato sauce with Manchego cheese. Oh my goodness. These put our traditional stuffed calamari for Christmas Eve to shame (sorry!) They were the perfect size, not too small and not too big, and the stuffing was perfect with the sweet-sour tomato sauce. 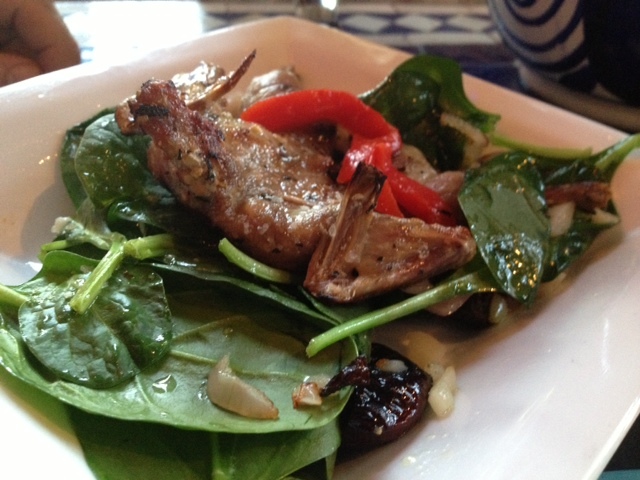 The sweetie picked two hot tapas for himself, both of which I sampled a little bit of but I was seriously too full by this point to truly appreciate. I know he really liked the Mahi Mahi in parchment paper, which was served with a lovely saffron sauce which tasted of sweet coconut milk to me. It was definitely a nice portion for the price. He also got the marinated and grilled quail served over sautéed spinach, dressed with honey, garlic and figs which was terrific – especially when you combined the figs and sauce with the juicy grilled quail.

Don’t ask me why, but the sweetie still insisted on ordering dessert. Somehow I did find room for a few bites of delicious coconut ice cream which was served with wonderful fresh berries and a waffle wafer. I have to say when the bill arrived, I was floored – by how reasonable it was given how much we’d pigged out (did I mention we also had two half-pitchers of sangria and two double espressos?) Our total was $127 before tip for all that food and drink. I’m sure if we were dining in one of Philly’s trendy tapas restaurants the total would have been $200, if not more. Yet it wasn’t just a decent price, but there wasn’t a single dish I thought was disappointing or that I wouldn’t order again if given a chance. 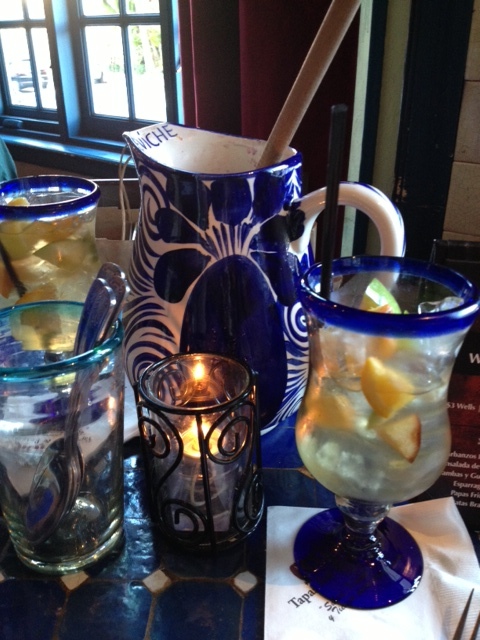 Ceviche is apparently a local Florida “chain” with locations in Tampa, Clearwater, Sarasota and elsewhere in the area. I’m not sure if the quality is as good at each location, but I was definitely impressed with their St. Petersburg restaurant and would happily recommend it to others. It’s a great place to stop in whether you want a small bite and a drink or a full meal – just be careful about ordering too much at once! I’d say you’d be fine for dinner with one of the hot Tapas plate and no more than 2-3 of the smaller cold tapas. But hey, if you’re on vacation, why not indulge in a serious feast like we did? We only regretted not being able to try even more dishes on their menu…