The divine glory that is pork belly.

Yes, so. I know pork belly has been one of the “it” foods for a while in foodie circles. I’ve had it in a restaurant or two. I’ve liked it. I liked it enough that when we had our first pig butchered in the fall of 2011, I asked to have some un-smoked pork belly set aside for me. The same for the second pig we had done last year, yet I just never got around to cooking it…until now. With another pig to pick up next week, I have to finish off some of the older meat in the freezer (which is still all in perfectly fine shape thanks to the excellent sealing/wrapping from our butcher). So I decided it was time to brave the pork belly.

Oh. My. God. Why have I been waiting for so long?

I should mention that our butcher is amazing and brines all the meat after hanging, so I did not have to brine the belly as is often the case. Instead I took this three-pound cut – not so elegant in appearance as most of the belly you see, but remember this was a 400-pound porker – and rinsed it well before putting it in an overnight marinade of soy sauce, sake, brown sugar, lime juice, ginger and garlic. 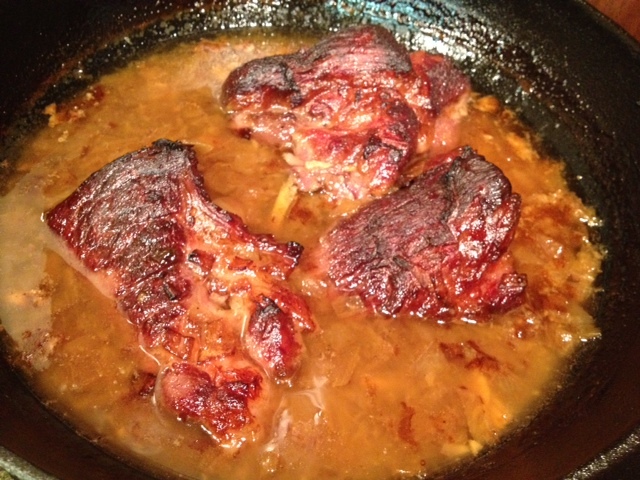 Tonight I took it out of the marinade, seared it in a cast iron skillet, then put it in the oven (with chicken broth, the marinade and some sauteed onions) on convection heat 300F – one hour covered, one hour uncovered. That might seem a little short on time for braised pork belly (a lot of recipes call for 3-4 hours), but this cut was actually not as fatty as most and the meat was fall-apart tender by that time. 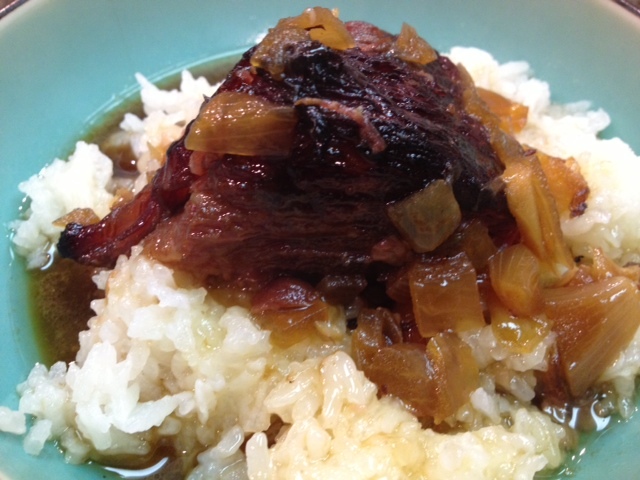 Served over some plain white rice, I can honestly say it was the most incredible and decadent thing I’ve eaten in…I can’t even say how long. The meat had a texture almost liked corned beef, but with a beautiful richness from the melted pork fat and sweetness from the soy-sake-sugar glaze. Oh god. I just…I don’t even have words except I’m so glad I have so many leftovers right now! I doubt they will last through tomorrow…

2 Responses to The divine glory that is pork belly.