It’s been many years since I’ve been to the Galleria at Crystal Run in Middletown, New York – and much longer since I’ve eaten anywhere in the vicinity beyond one of the large national chains that dominate the area. So it was with both excitement and some trepidation that a dining companion and I recently stumbled upon Fuji Japanese Steakhouse and Sushi Bar at the Galleria while doing some post-Christmas sale shopping. Hunger won out over any wariness we might have about eating sushi in the area, so we decided to give it a try. By the end of the meal we were quite happy we had, as it ended up being a very nice lunch experience overall.

The interior of Fuji Japanese Steakhouse and Sushi Bar is pretty typical for an American hibachi-style Japanese restaurant (yes, Benihana and their many imitators). Walking in from the Galleria-side entrance, we were cheerily greeted by our hostess who had just put out a chalkboard with their “Caturday” drink specials. I said we were more interested in sushi than hibachi, so we were taken through the large hibachi room to another part of the restaurant dominated by a sizable sushi bar, and a small section for “regular” menu dining. The currently ubiquitous “Gangnam Style” by PSY was pulsing on the restaurant sound system, but the music was not too loud nor obtrusive as we looked over the menu.

Fuji offers a wide variety of your standard Japanese restaurant menu items besides the hibachi-grilled chicken, steak and seafood. Sushi and maki ranges from the traditional to modern Americanized rolls, with a few unique offerings including crawfish rolls I’ve not seen elsewhere. They also have a selection of udon, soba and ramen noodle dishes which were tempting, but we wanted to try out more of the appetizers and sushi rolls for this first time at the restaurant. 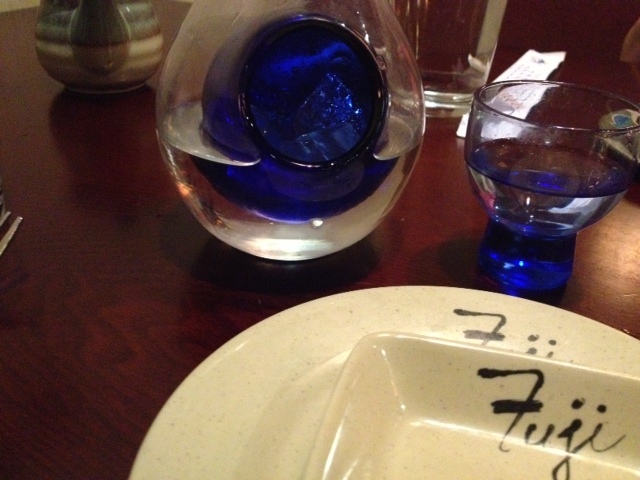 Service was a little slow as the restaurant was quite packed for lunch, but our waitress was extremely friendly and very helpful. When the sake I selected from the drink menu wasn’t available, she asked what kind I liked in general (more dry than sweet) and the bartender suggested I try the Karatamba. It was perfect and I really enjoyed it. My companion declared her Whiskey Sour expertly mixed as well. 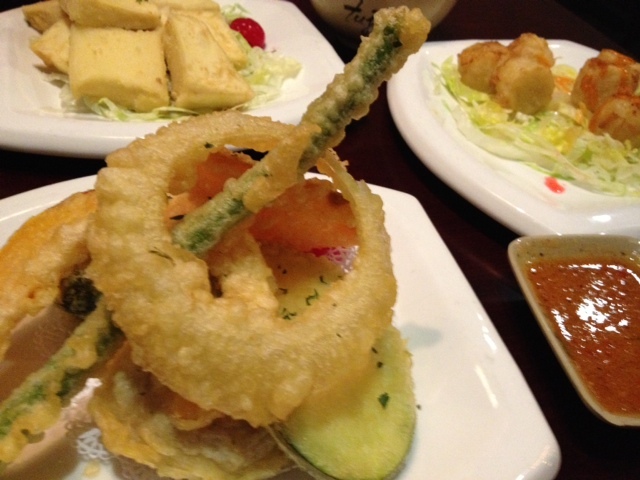 To start we decided to order three appetizers: Age Tofu, Vegetable Tempura and Shrimp Shumai. We also got two green salads. The salads were pretty standard iceberg lettuce with a creamy ginger dressing – I did like that they were chilled really nicely so the lettuce was super crisp and refreshing. Of the appetizers the Age Tofu was the real winner: quality tofu, right from the fryer yet not in the slightest bit greasy. The same could be said for their tempura – it’s clear Fuji knows their stuff when it comes to fried food and is using quality, fresh oil. The shumai was the only slight disappointment; they tasted to me like the standard frozen variety you can get in any Asian supermarket and my companion thought they tasted a little “fishy” (ie, not the freshest) to her. 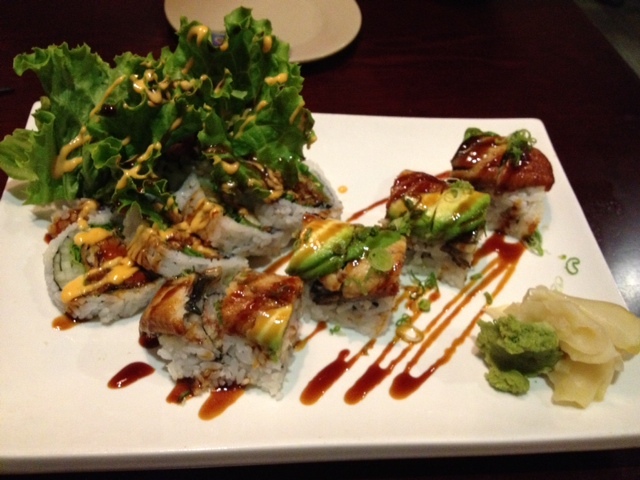 After all of that, we were glad we’d only ordered two sushi rolls and not more! The first was their Spider Roll, which was tasty if a little different than usual with romaine lettuce “flowering” out of the top of the roll. The crab was again nicely fried and fresh tasting, though the large lettuce leaves made the roll a little awkward to eat. The other roll was a spin on a Dragon Roll, with shrimp and tempura “crunchy” inside, topped with avocado and eel. I love eel and avocado rolls in general and this was quite a good version of one.

Our bill was a reasonable $67 before tip including my sake, 2 mixed drinks, and all of the above-mentioned food. We both enjoyed the meal overall and while it wasn’t the “best” sushi I’ve had, it was more than acceptably good and I look forward to going back to trying more of their specialty rolls in the future. It’s nice to have somewhere new in the area like Fuji Japanese Steakhouse, and we might even give the hibachi a try one of these days when in the mood for the entire “show”.