This past weekend I hosted what’s become pretty much my annual holiday gathering of friends & food at the house. About a week’s worth of preparation went into the food – I do all the cooking save desserts, which I’m always happy to let others bring (and that way temptation isn’t sitting around mocking me for days when I’m trying to lose some weight as well!) Let’s take stock on how the preparations & party unfolded:

Monday, December 3: Supply shopping – that is, primarily shopping for booze. I checked out WineWorks in Marlton, NJ since I was up in that area already and was blown away by their incredible selection – including these beauties which I’d been searching to find for several years! 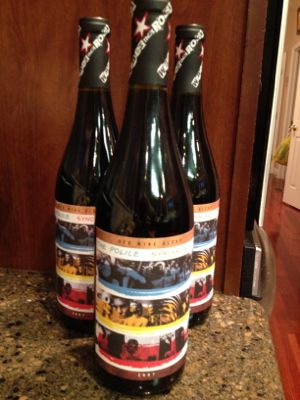 Tuesday, December 4: Final menu planning and outdoor work, since the weather was so lovely.

Wednesday, December 5: Time to start cooking – or at least, baking and defrosting. I had a lovely smoked bone-in ham from my mom’s farm – delicious pasture-raised pork! – which needed to come out of the freezer and into the fridge. Going IN to the freezer, meanwhile, were two trays of Pizza in a Bite, all stuffed with mozzarella cheese. I made my own pizza dough and seasoned them slightly with olive oil and pizza spices before freezing. They’d go in the oven the day of the party and trust me, I should have made twice as many as I did! Once baked and hot out of the oven with some homemade marinara on the side, they’re always devoured quickly. 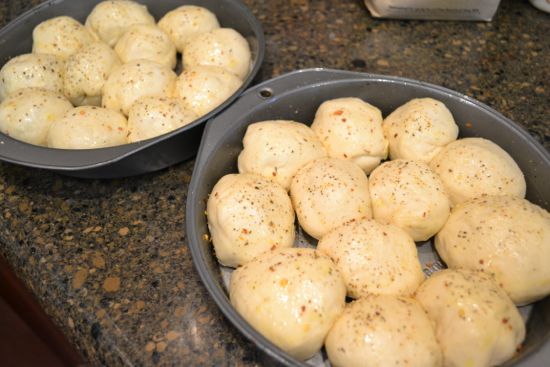 I also made a loaf of cornbread with fennel seeds from one of my Mexican cookbooks, pecan florentine cookies, white chocolate lemon cookies, bourbon balls and my favorite simple Vanilla Wafer Cookies.

Thursday, December 6: House cleaning day! I also started some dried beans soaking for making a soup and a salad dish the next day… 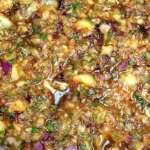 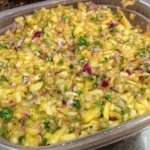 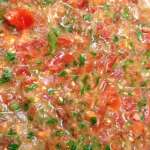 Friday, December 7: This was the big cooking prep day – I basically was in the kitchen almost non-stop from nine in the morning until nine at night. I started by getting the white beans in my slow cooker and making three different kinds of salsas: pineapple, mango and classic tomato.


I made marinara sauce for the pizza bites, following Ina Garten’s Basic Recipe but cooking it much longer and adding more fresh herbs. Next, I worked on a farro salad which I was making up the recipe for on the fly: Chilled Farro Salad with Shrimp, Strawberries and Pineapple: 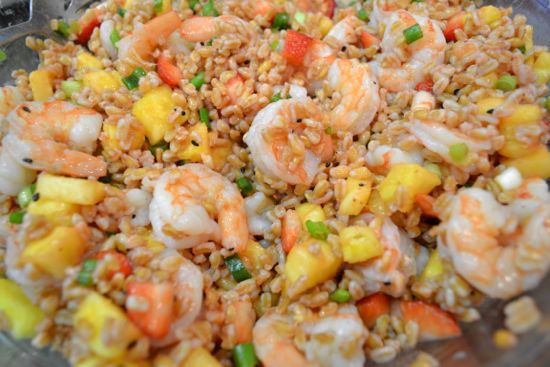 After that, my beans were done so it was time to start on two more recipes. First up was a white bean and ham hock stew recipe from Food & Wine, which gave me a good use for some more of my mom’s great pork… 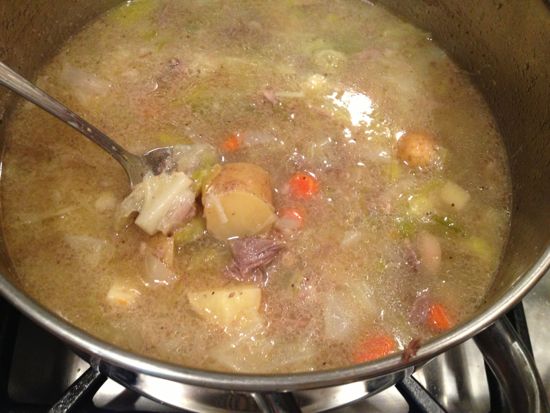 I also wanted to have a filling vegetarian pasta salad for the party, so I made up a recipe using the white beans, red onion, fresh parsley, capers, roasted peppers and beautiful colorful bow-tie pasta from Venice. The dressing is a simple Italian vinaigrette. It looked so fabulous! 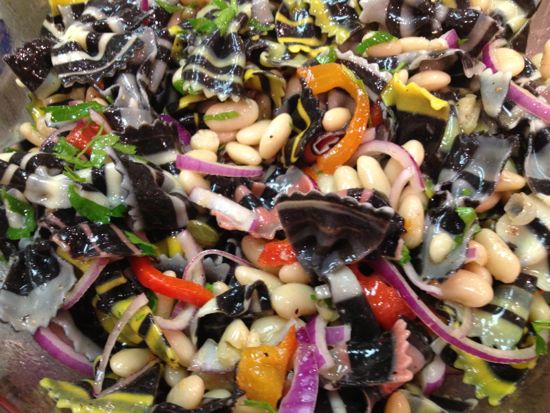 Every party, I like to roast up some fresh mixed nuts as well. I’ll toss in some chopped fresh herbs (whatever is on hand: basil, rosemary, sage…), olive oil, maple syrup, sea salt and hot cayenne pepper for a tasty sweet & spicy mix. These always go fast. 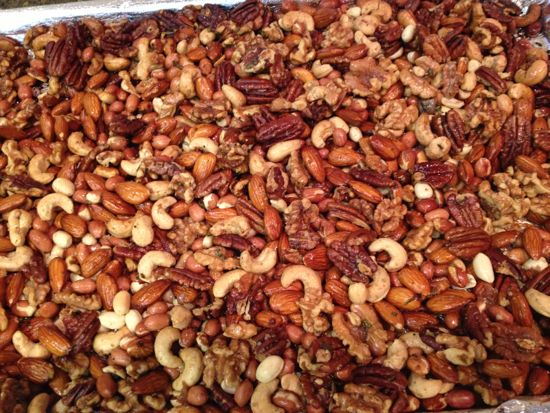 For a vegetarian soup, I had some fresh roasted pumpkin to use up so I decided to try this Spicy Pumpkin Soup. Like one reviewer suggested, I left out the heavy cream and also ramped up the spices a bit. It doesn’t look like much in the pot but it sure tasted good… 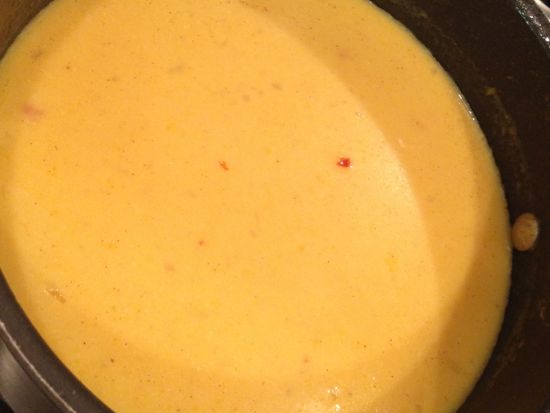 Last fully prepped dish of the evening was an adaption of another recipe from Food & Wine, Roasted Brussels Sprouts with Cabbage and Pine Nuts. I did it with some nice savoy cabbage I had to use up instead of red cabbage. 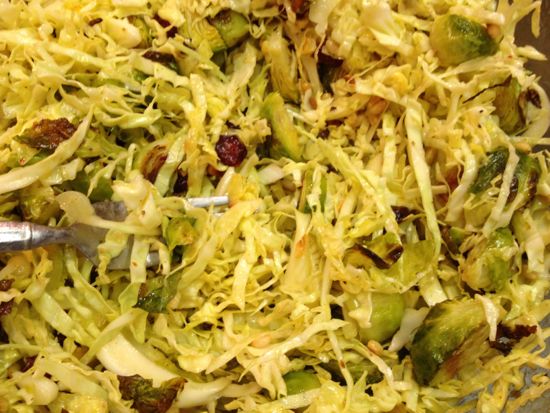 Oh yeah, I made some quick guacamole too to use up some avocados that were on the very ripe side (forgot to photograph.)

Last job for the evening was to prepare my venison rib racks by trimming them and getting them in a marinade. This was quite a chore and too messy to take a picture of! But I had two massive rib racks which I’d gotten for free from my butcher (most hunters don’t bother cooking the ribs as there isn’t a ton of meat on them, and they are a bit of work to prepare.) I’d previously made venison ribs using this recipe for Venison Ribs with Blackberry Jam and Red Wine and hadn’t been totally pleased with the results – they were a little dry. I wanted to try it again, this time marinating the ribs overnight first in a mixture of red wine, olive oil, juniper berries, kosher salt, peppercorns and orange soda (the soda to tenderize the meat).

Saturday, December 8: The big day! After doing an ice run (and picking up a last minute London Broil to throw in a quick marinade and cook up), it was time to start preparing “the arsenal”: 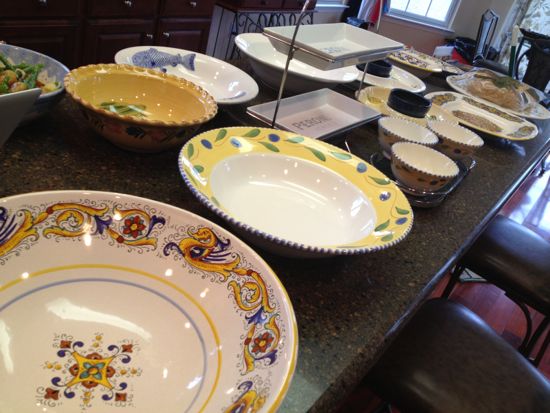 The ham went in the oven first to warm up. Meanwhile I decided to make one more vegetable dish: a simple Potato and Green Bean Salad, which I only modified from the recipe by using shallots instead of red onions and using small fingerling potatoes with skin on. These were delicious! 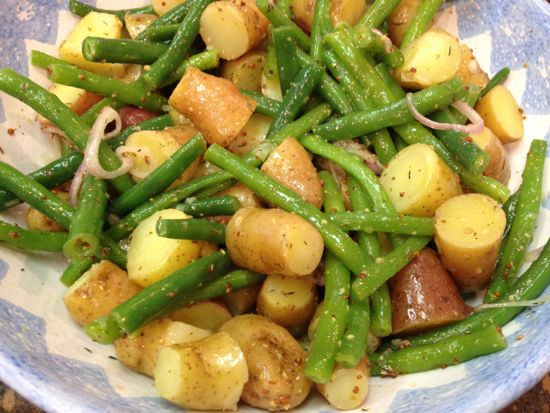 I also fried up two batches of fresh tortilla chips: one fried in vegetable oil and one fried in my homemade lard. Each way has a slightly different flavor and of course, gives folks the vegetarian option or not as they prefer. The ham and bean soup went in the slow cooker to warm up, the pumpkin soup back on the stove and a low simmer, and the venison ribs in the oven – covered at low heat for 2 hours, then finished off for another 20 minutes at higher heat to thicken the glaze. This really did the trick so they came out moist and fall-of-the-bone tender. After the ham was done the London Broil was cooked and left to rest.

Time to load up the bowls and start getting ready for company. Of course along with all of the home-cooked food, I made sure to have some nice Italian dry sausages and salami, gourmet cheese from our Cheese club, and fresh raw veggies to munch and dip. 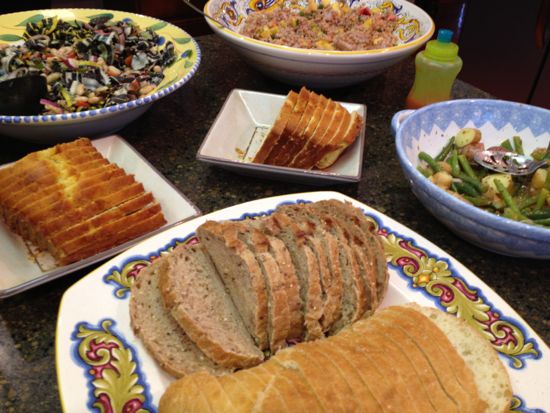 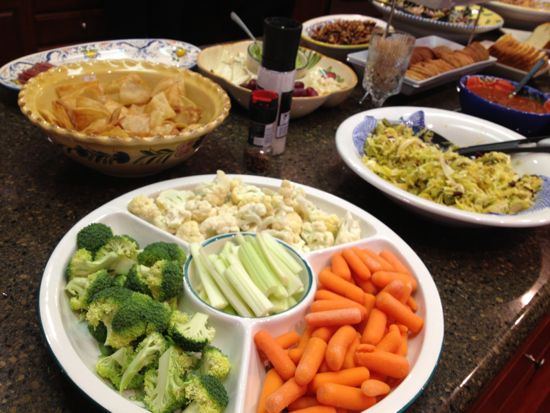 I think it’s safe to say a good time was had by all – including myself once all the cooking was done and I could finally relax and enjoy a little wine for myself! 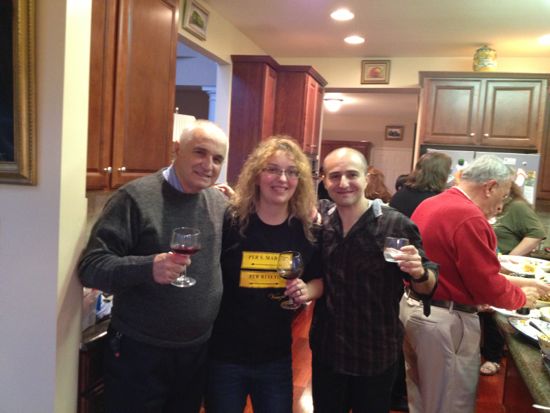 Hard to say what the biggest hits of the night were. The pizza bites and London Broil were gone as fast as they were out on the table, the ham got much praise and the adventurous who tried the venison couldn’t believe it was game meat. I’ve been enjoying finishing off the leftovers all week – although there wasn’t that much that didn’t get eaten up, and it was a good amount and variety of food for the 30 or so guests we had at the house. I’m just glad the family is having our Christmas Eve Feast of the Seven Fishes Dinner at a restaurant – I don’t think I’ll be up for preparing another monster meal like this again anytime soon…well, at least not until the summer BBQ…!