Sunday, October 28. Again we were awoken by the warning siren for acqua alta – I believe it was a three-tone alarm that morning, no less. Knowing it would be ugly outside, we spent a leisurely morning in our apartment before venturing outside. We also had to spend some time seriously looking up the news about approaching Hurricane Sandy at home; our flight back to the States was scheduled for the following day. It was seeming increasingly less likely we’d actually be flying anywhere anytime soon and I’d already received an alert from US Air that I could reschedule my flight without penalty. But we decided to wait until that evening to make our plans and decision for sure.

We finally ventured out a bit after 11am, when the high tide was starting to recede a bit. The weather was still unpleasantly cold and wet, worse than the day before, so we made a quick dash through San Marco toward the Museo D’arte Sacra S. Apollonia, an interesting and slightly less well-known museum of Venice which was hosting a Salvador Dali exhibit I wanted to see. We took our time enjoying the exhibit, as well as the museum’s small but impressive permanent collection of sacred art and artifacts. The museum itself is housed in a lovely building with a beautiful ancient courtyard. 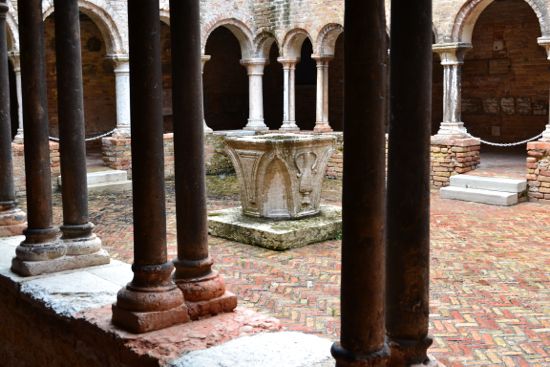 It was about 2pm when we finished – time for a late lunch. For some reason we were both craving pizza, and a nearby restaurant appeared to be serving up just what we desired: Aciugheta. The restaurant was packed – plenty of others lingering over meals instead of venturing out into the cold rain. But we were able to snag a table near a window and behind one of their wine cabinets. A bottle of warming Cabernet Franc seemed in order and hit the spot nicely while perusing the pizza menu (they had plenty of other tempting-looking options, but we weren’t looking to eat for the entire day again as we had done the day before.) 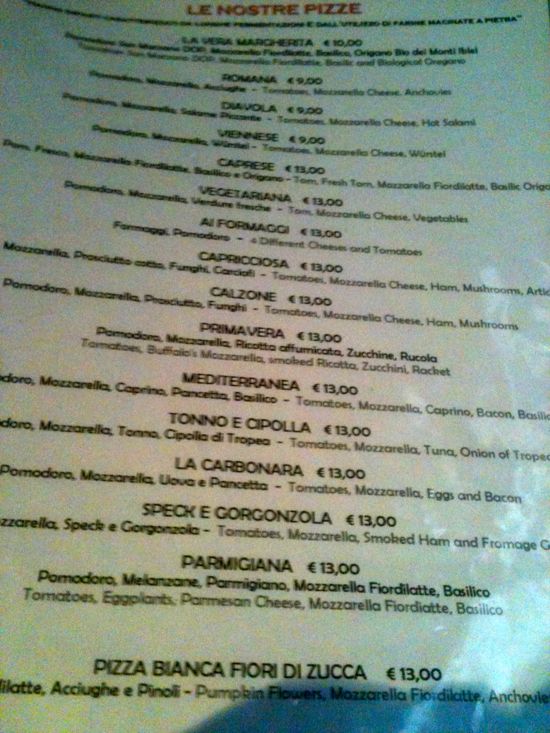 The bottom pie listed, the Pizza Bianca Fiori di Zucca, grabbed my attention immediately. I knew I had to try it. David had a harder time deciding and eventually went for the Carbonara – he was craving that pie with an oven-baked egg on top! Both pies came relatively quickly, and were quite delicious. 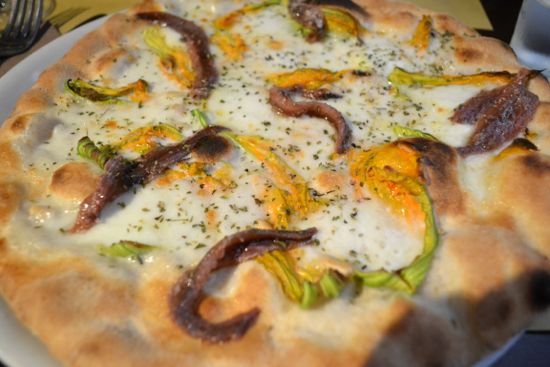 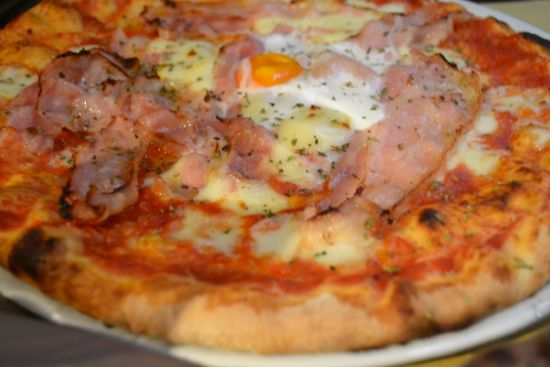 It was $75 US for our two pies, wine and espresso – I don’t believe we had any dessert.

After eating, we wandered in to a few churches we had not previously visited which were open for afternoon viewing and did a little shopping. But the weather was getting seriously unpleasant and we now had some purchases we didn’t want to get wet or keep lugging around. So we decided to head back to our apartment to unload, rest a bit, and decide on our travel plans.

The forecast at home was looking worse by the hour. It seemed Hurricane Sandy was set to hit the Philadelphia area (where we were flying in to) just when our flight was due to arrive. I decided to go ahead and call our airline to see about changing our flight – we’d worry about our apartment rental or finding a hotel room for the rest of our trip after that. Fortunately because I called BEFORE our flight was officially cancelled, they gladly rebooked us on a flight home on the morning of Thursday, November 1 instead (the earliest they would rebook, not knowing how bad the storm damage and difficulties at home would prove to be.) They even upgraded us to first class for being so quick to call and reschedule! No hardship in the idea of getting three more days to spend in Venice…although with the storm due to pass directly over our house in New Jersey, it was worrisome to think about what damage we might be facing while being completely unable to do any storm prep.

Well, nothing to do about that now. I did take care of some laundry – during which time I unfortunately dropped my iphone in water and rendered it completely out of commission for two days of drying time! We were able to secure our apartment for another three nights so that was one less thing to worry about as well.

We kept hoping for the weather to improve so we could venture out for a light dinner, but the rain showed no signs of slowing down that evening. Eventually we just got out the umbrellas and left the apartment, hoping we could find a table somewhere nearby to eat. Of course, being a Sunday night it seemed all of Venice was out enjoying dinner – the first 4 or 5 restaurants around our campo were solidly packed and had 2 hour waits for tables. We kept walking and finally spied an open table at Tavernetta San Maurizio, a small place which looked appealing and authentic. Fortunately we were able to get the table and settle in for a short while to dry off, and figure out our plans now that we had three extra days to enjoy.

Due to the bad weather outside I did not bring my camera with me for dinner that night – and with my dead iPhone I couldn’t take pictures that way, either. So I’ll have to just go on memory that the food was very good indeed. We did order light because of our late lunch: two pasta dishes and one veal secondi. I know that I had an absolutely divine seafood lasagne – it featured the most delicious, rich white sauce and a perfect balance of shellfish filling, the lasagne noodles wonderfully baked and just slightly crispy – the way I love it most! Unfortunately I don’t remember what pasta David had, I think it might have been a gnocchi because it was so good that the next day I had to order a gnocchi dish elsewhere for myself. Our veal was simple but lovely, served in a lemon and white wine sauce.

I know we were enjoying ourselves so much in the cozy restaurant that we lingered to finish our house wine and share a tiramisu dessert. The atmosphere in the tavernetta was lovely, with old blues music playing and local Venetians enjoying ombras of prosecco while waiting for their tables. This is a restaurant I would love to return to some day to sample more of their menu – and this time to be able to get some photographs to remember it better!