Sorry for the delay in continuing the Venice adventures…Thanksgiving always makes for crazy busy times, but with only a few more days’ adventure to share, I promise to finish them all!

We were awoken early in the morning of Saturday, October 27 by a strange and downright spooky sound outside – the warning siren for approaching acqua alta. It begins with a World War II-era alarm followed by rising, eerie bell tones: one note for every ten centimeters above 100 cm (hear them for yourself on the Citta di Venezia page). That morning we heard two tones, sorrowfully announcing the coming tides. Disquieted, we fell back to restless sleep for a few hours, uncertain what exactly the day ahead would hold.

When we did awaken and looked out our balcony windows, the view was quite a surprise, even KNOWING the high tide was coming.

This was going to make things interesting! While I had my short waterproof boots, as the woman at the concert warned me the night before they weren’t going to do much good once started wandering about, knowing that we weren’t even in one of the worst flood-prone areas. David had NO boots packed with him, but after sloshing around in garbage bag covered sneakers for a while, a French tourist offered to sell him a pair of cheap plastic shoe covers for 5 Euros. I soon regretted not buying a pair from her myself, but near Piazza San Marco I found a pair in a trash can and they definitely came in handy. We’re not even sure WHERE these boots come from as no one was selling them – perhaps one of the cruiseships in dock for the day hand them out to passengers. 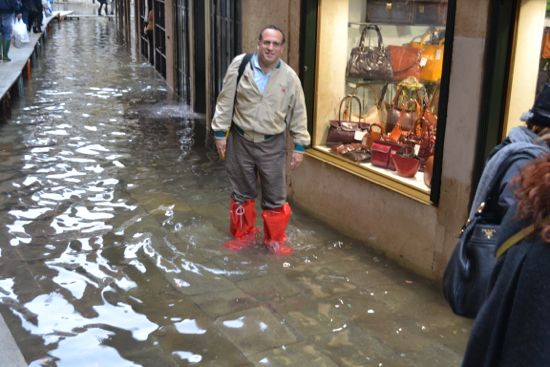 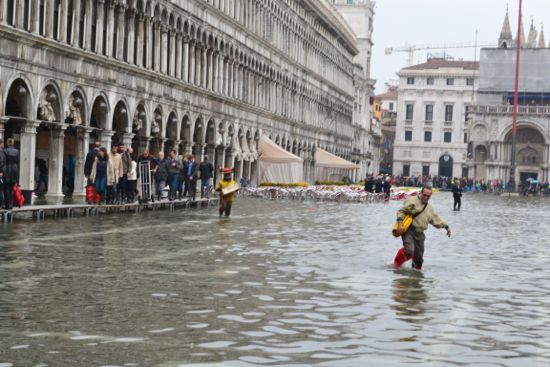 At least some seagulls seemed to be having a good time swimming around the piazza. 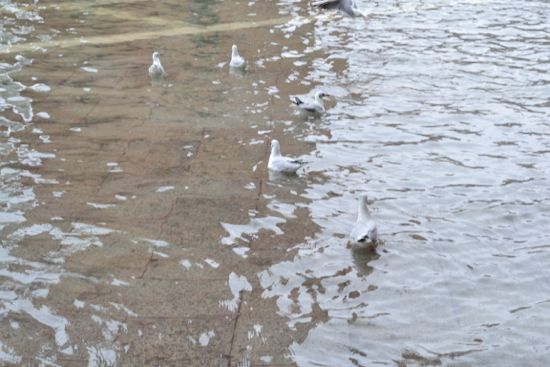 I, on the other hand, was fighting a sinus headache (either from too much wine the day before, the sudden change in weather, or both) and the cold and my wet feet/ankles/calves weren’t helping. We decided to duck into the Palazzo Ducale to dry off and enjoy the splendor and excess for a few hours, hoping the tides would recede a bit by the time we were done.

Fortunately about three hours later, the water had indeed gone down and we were able to venture forth in a brief break from the cold rain as well. We headed toward Castello, one of the sestieri of Venice which we had not explored much in the past – and seemed to be on slightly higher and drier ground. Given it was 2pm it was well past time for some food, and the area promised several options which looked promising and less touristy than those in nearby San Marco. We ended up choosing Trattoria Ai Corazzieri where we could sit outside in their pleasant patio seating – cozy but protected from the rain still hitting on and off through the rest of the afternoon.

The menu was not very long and promised many tempting and authentic-sounding offerings. Given we figured this would be our main (or perhaps even only) meal of the day, we ordered an all-out feast: the mixed seafood antipasti, two pastas, and a plate of fritto misto to share. David wanted to order a second secondi but I had a feeling we’d already ordered too much – and I was right!

The seafood antipasti was wonderful, with a very nice assortment of offerings. Some we’d already enjoyed elsewhere like razor clams, folpeti, fried calamari and scampi; a few were new delights such as a lovely “in saor” made with tiny shrimp and a fresh oyster. We devoured it all! 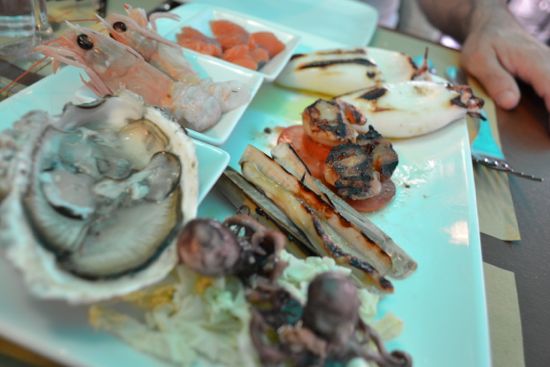 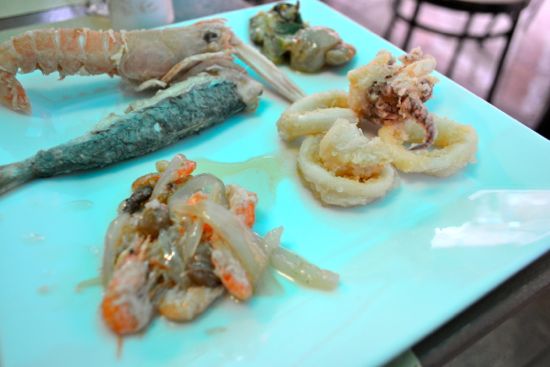 Our pasta dishes came next, which I was slightly disappointed in after the wonderful antipasti. I’d ordered the Fusilli in a White Meat Sauce, which was…fine, just not especially exciting. I guess I was expecting a denser, richer flavor (and also a smaller portion a bit more artfully executed): 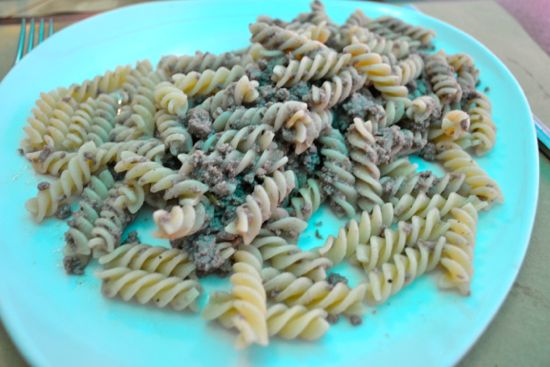 David ordered the classic Venetian “Bigoli in Salsa” pasta of sardines and onions. Again, it was a little drab in presentation, and also quite salty for my tastes. 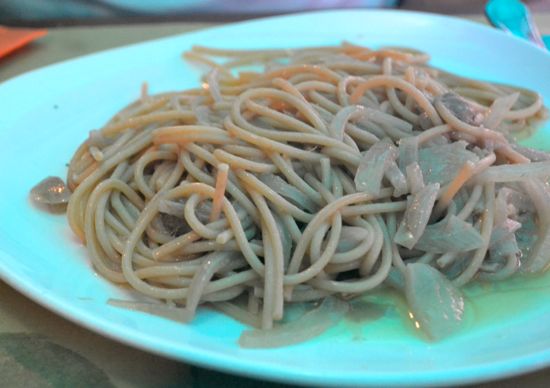 That said, “redemption” came in the Fritto Misto. Although it was a fairly simple offering of sardines, calamari and scampi, it was served on a wonderful bed of soft white polenta – David declared it the best he’d tasted in Venice yet. It was delicious and also made for a pretty presentation, the white polenta almost looking like a bed of ice or salt upon which the fish was served. 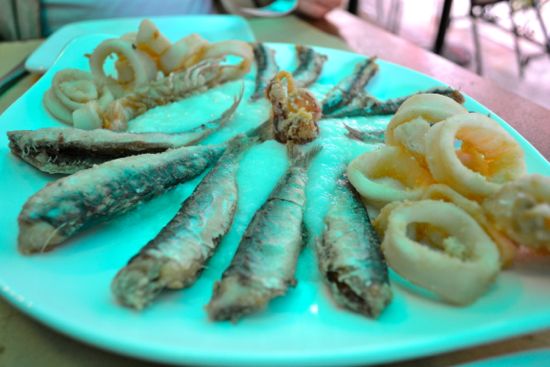 After all of that there certainly wasn’t any room for dessert! We only lingered to finish our wine and some espresso – and to wait for another passing rainstorm to finish. The total bill was about $145 US.

From there, we continued on walkabout through the Castello, heading up toward and along Via Garibaldi all the way to the Island of San Pietro. This is a really lovely part of Venice that many tourists never venture into – in the early evening Via Garibaldi is bustling with energy as local Venetians shop, enjoy a drink, and perhaps head out for evening mass. Find your way to the Basilica di San Pietro di Castello – what was in fact the city’s cathedral church from 1451 to 1807 – and one enters a quiet and distinctly residential part of Venice, quite wonderful to explore. 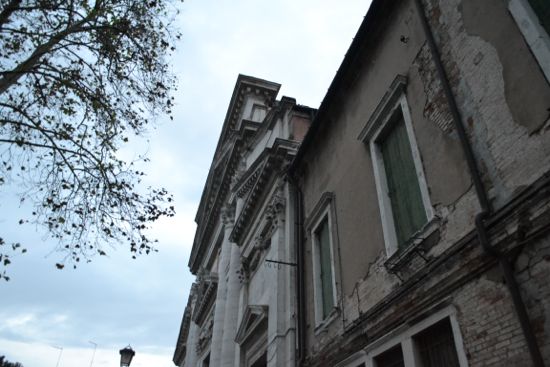 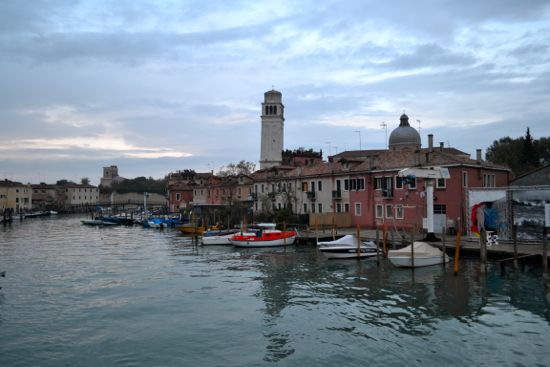 We spent some time in the interior of the church until evening was almost fully upon us. Not at all hungry for dinner after that huge late lunch, we decided to spend the evening listening to some more music – this time a performance of “La Traviatta” at the Scuola Grande di San Teodoro. While it might not be like going to the opera at La Fenice, the tickets were considerably less and it was quite charming enjoying beautiful opera music and singing in a more intimate, less formal setting. My only complaint is the old Scuola’s meager bathroom facilities made it a mad dash to get in line between acts if necessary. But it was a fine way to end what had been a wet but interesting day in Venice.