After such a busy day the day before off exploring Vicenza, we took it a little easier and decided that morning to return to the Scuola Grande di San Rocco. There is just so much to see and take in while viewing Tintoretto’s amazing canvases there that it’s impossible to appreciate them all in one visit. Setting the mood that morning, there was a wonderful singer in the campo outside performing opera music and popular Italian songs. His voice echoed up through the Scuola and afterward we had to buy his cds for sale to remember the moment.

We were so close to Osteria Al Ponte “La Patatina” – one of our favorite restaurants so far on the trip – that we had to go back for a second lunch there. And it was as good, if not better, than it had been the first time! We started with two antipasti we hadn’t tried last time, Scampi in Saor and Marinated Fresh Anchovies. Both were great – especially the scampi which was a delicious variation on the standard “Sarde in Saor”. I think David is still dreaming of that dish, it was one of his favorites from our entire Venice trip. 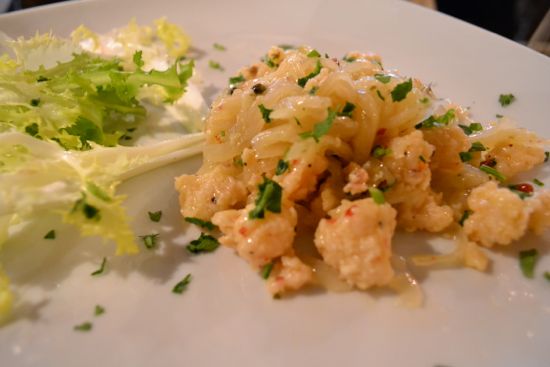 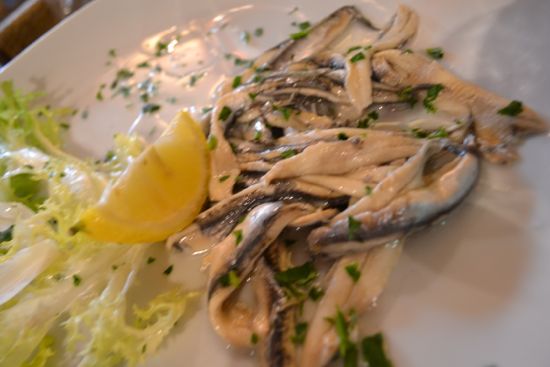 I wanted to try one of the special pasta dishes of the day, as it was similar to something I make at home quite often: pasta with tuna, olive and capers. At home I usually make this with high quality Italian canned tuna fish, but here it was served (of course) with fresh tuna right from the market that day. Needless to say, it’s going to be hard to go back to my “canned” version ever again! 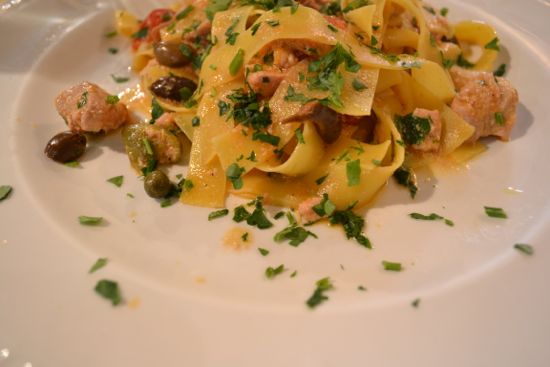 David had the grilled monkfish. Now, monkfish is not one of my favorite things to make or typically eat – it can be a tough fish (despite claims of being the “poor man’s lobster”) but it’s quite popular in Venice. The difference in having one clearly freshly caught and expertly grilled was a revelation and I have to give the lowly monkfish some more respect after tasting this lovely presentation. 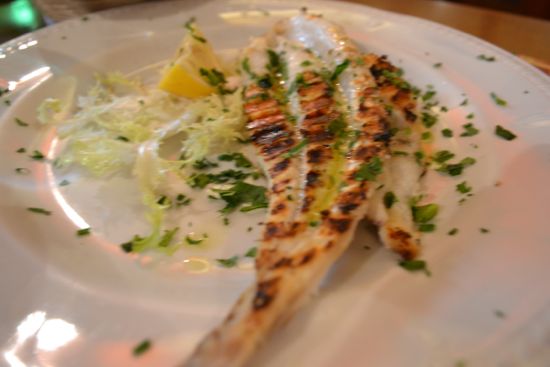 After lunch we went on walkabout for a while, then decided to make good use of some 24-hour vaporetto passes we’d bought by doing some cruising around the canal. One place we kept meaning to get to was the island of San Giorgio Maggiore. Its beautiful Palladian-designed church is a landmark of the canal, and inside were several Tintoretto canvases we wanted to see. 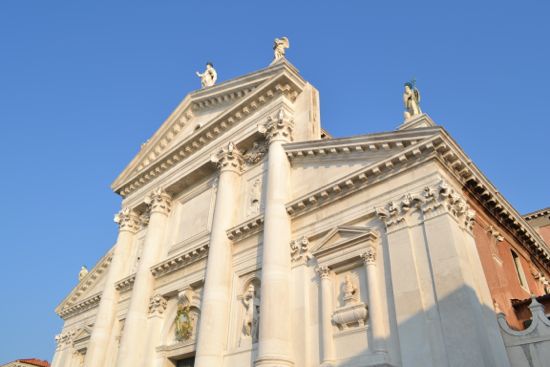 One is able to get to the top of the church bell tower, which offers breathtaking views of all of Venice and the surrounding lagoon. 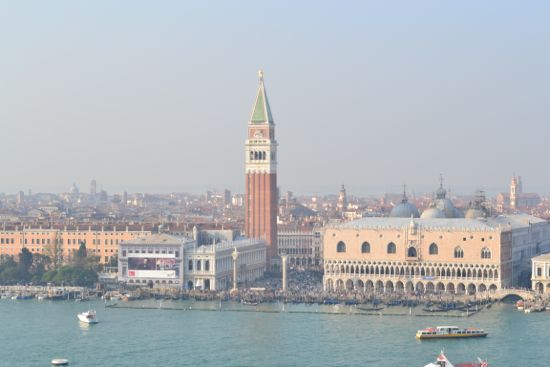 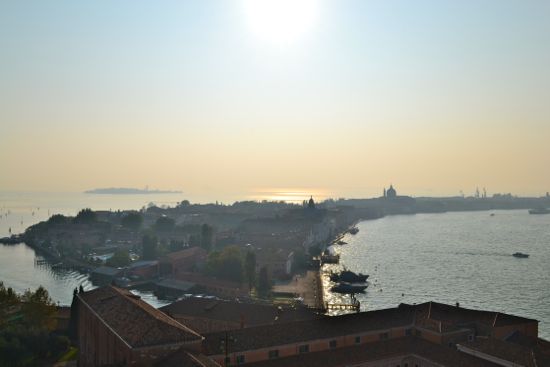 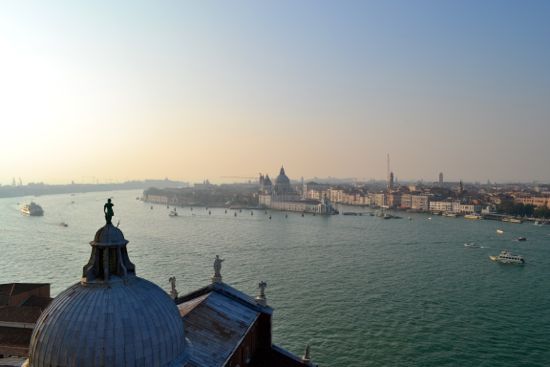 We lingered on the island for a time, enjoying a spritz in a small cafe before reboarding the vaporetto back to San Marco. From there, we decided to hop on a different line to take a trip over to the Lido. Known primarily as a beach resort during the summer months, this 11-kilometer long sandbar island is actually home to 20,000 residents. Many of those who work in Venice seem to reside on Lido year-round, and it is the one lagoon island where one actually does find cars, buses and bicycles in abundance.

The Gran Viale Santa Maria Elisabetta made for a pleasant late-afternoon stroll with some delicious gelato in hand. We made our way across the island to the beach, deserted now in the cool October months, but still a lovely sight to this beach lover. 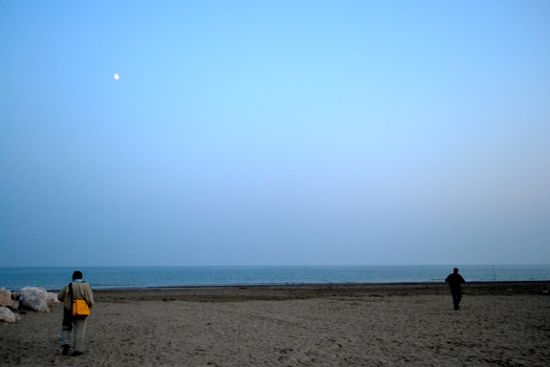 We headed back to the Gran Viale and took a seat in a cafe, enjoying a few more drinks (and a panini) while watching a football game on the tv with a few locals. Some time after 8pm we decided to head back to Venice proper, catching the vaporetto and enjoying the slow boat ride along the Canal, along Giudecca and finally getting off near the Rialto bridge. 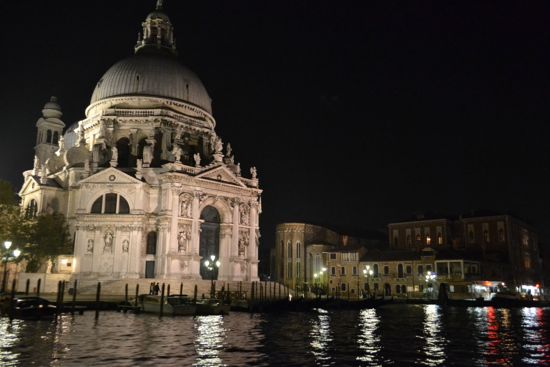 We still weren’t especially hungry after our large lunch but wanted something light for the evening. However it was getting late and a lot of places seemed to be shutting down to the night as it was nearly 10pm. We ended up at Caffe Vergnano 1882 Venezia, mostly for its pleasant setting along the canal but a little bit away from the crowds. There are several restaurants with outdoor seating all along the Campo San Giacometo, but Caffe Vergnano was the one that had the most “lighter” offerings available and was still serving food.

We stuck to two pizzas which came out extremely fast – a bit too fast for my tastes, as it certainly implied they weren’t the freshest made, and mine had the texture/taste of likely having been just popped in the oven or perhaps under the broiler for a few minutes to re-crisp. It wasn’t bad, and still better than most of the pizza back home, but I’d put it on the bottom of the pizza we had in Venice over the entire trip. But, then again, it was late in the evening and it seemed like the staff was just ready to close up and go home by the time we were done. We were certainly ready for bed ourselves and headed straight back to our apartment once the meal was finished. 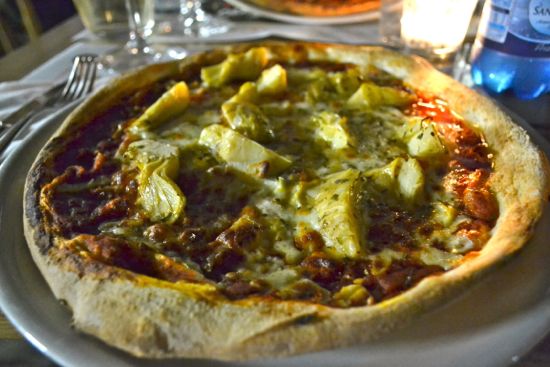 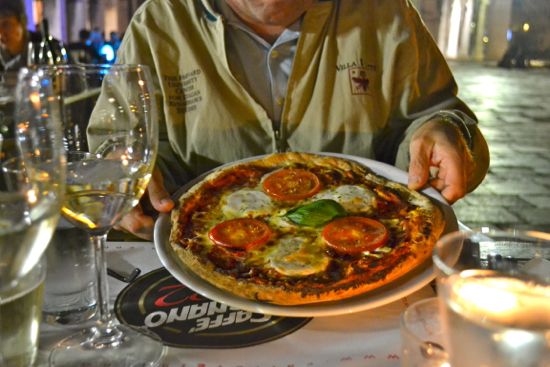