Sorry for the few days’ delay since the last travelog update – I was actually busy preparing for and then in New York for the MasterChef Season 4 open casting call on Saturday. Yes, I actually auditioned for the show and it was quite an interesting and fun experience. I won’t say more than that for now…

A week into our vacation and it was time for a little change of pace. We decided to take the train to Vicenza for the day, as it was only about a 45 minute ride – once we managed to get to the train station, that is! We missed the early vaporetto we planned to take from near our apartment, meaning we missed the early train. But that was no big problem…we decided to walk to the train station as it was a beautiful morning. Our route took us past the produce and fish markets, which are always fun to stroll through and check out the wonders of land and sea available for the day. 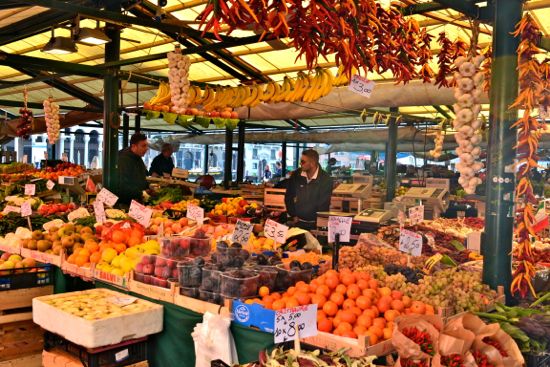 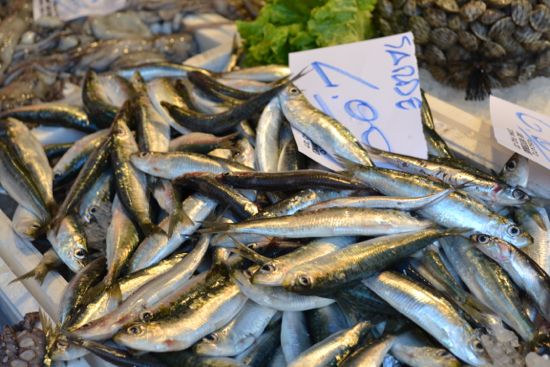 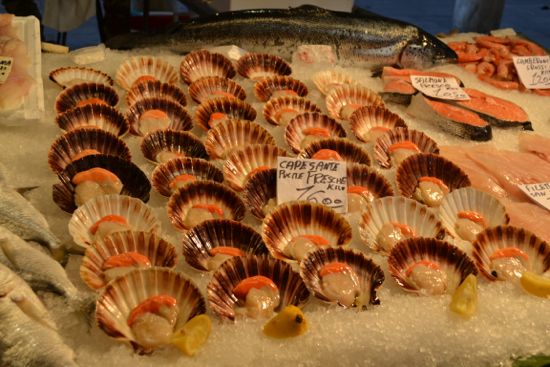 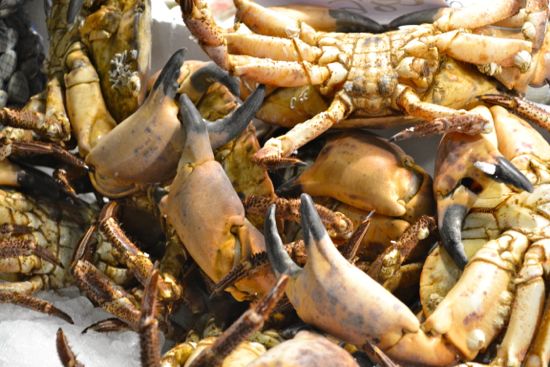 We made the next train and arrived in Vicenza at about 11:30…it felt peculiar being in a city with cars, scooters and buses whizzing by after a week on water! It was a short walk from the train station into the historic center of this city dominated by the architecture of Andrea Palladio. We walked to the Basilica Palladiana and found it was hosting an art exhibit entitled “Raffaello verso Picasso”. Never ones to pass up a good art exhibit, we ended up spending two hours or so in the museum enjoying the works tracing the evolution of art from Renaissance times through the modern day. It featured many beautiful works we’d not had the chance to see before including paintings by Fra’ Angelico, Caravaggio, Mantegna, Bellini and Botticelli – just to name a few. 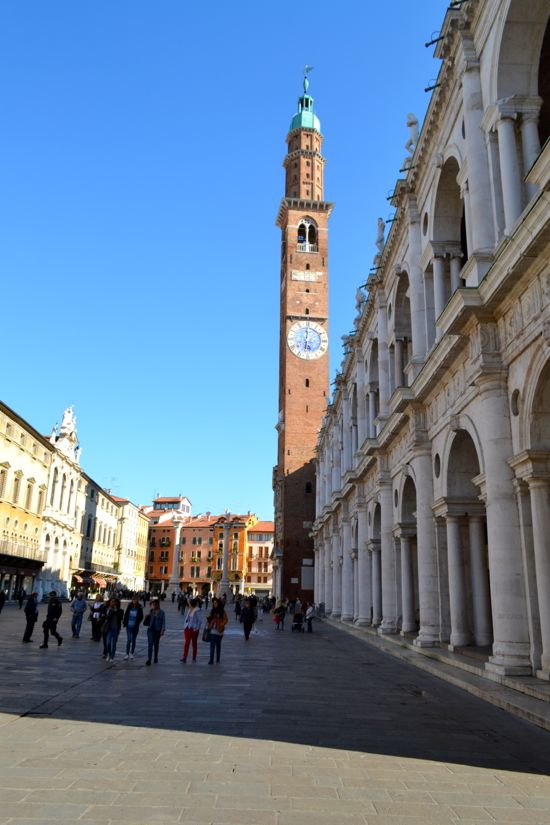 Although the exhibit was lovely and we could have lingered longer, it was getting into early afternoon and we still had sites to see in Vicenza – and the nearby countryside as we wanted to visit at least a few of the Palladian mansions (many of which were only open 3-6pm). But first, we were also famished! Time for at least a quick bite, and right near the Basilica was Amici Miei Restaurant and Drinks, with seating looking out at the beautiful campo. Amici Miei had a very modern, urban feeling to it with a small menu for lunch that seemed just right. Our waiter recommended some fresh buffalo mozzarella just in that morning and who were we to argue? It made the perfect, ultra-simple caprese and was just delicious with a sparking rosé wine our waiter also suggested. 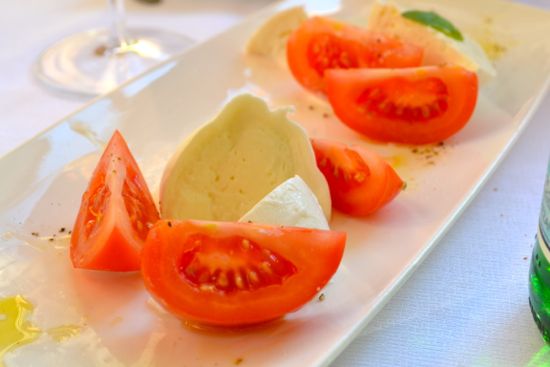 We saw that the pastas at Amici Miei looked lovely, but small sized – rather like one would expect at a tapas place in the states or restaurant where one would be encouraged to order several small plates to taste. As the pasta prices were rather modest as well, we decided to order three plates to share: bigoli with artichokes and smoked ham; wide noodles with broccoli and sardines; and tagliatelle with beef liver and truffles. 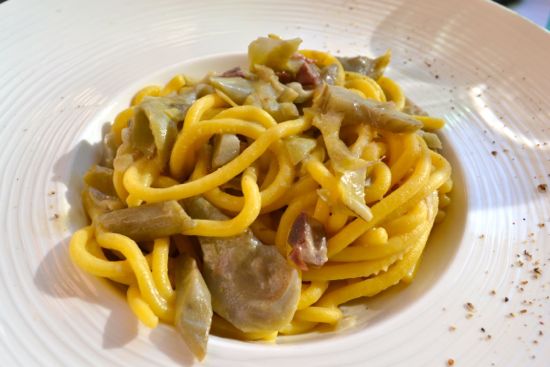 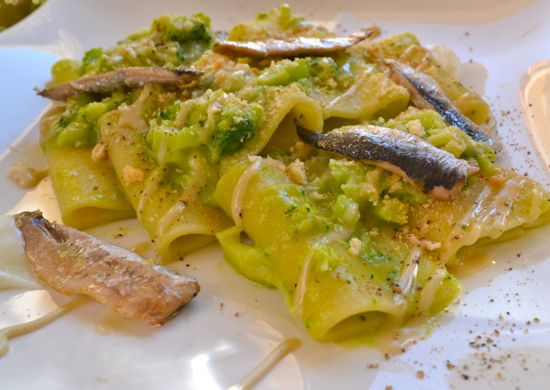 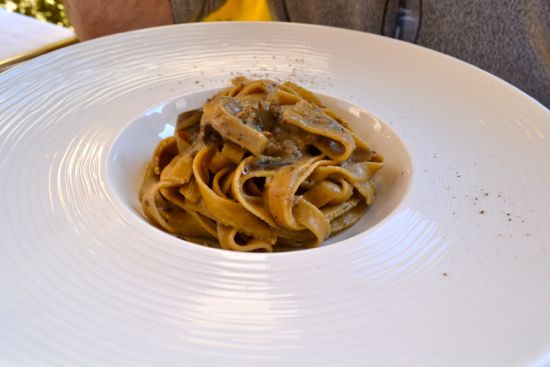 All were excellent but I think the winner was the beef liver and truffle pasta. One of those dishes that could convert anyone into a fan of liver with its rich flavor and perfect earthy note from the truffles. The sarde pasta was really interesting, with the contrast of the strong sardine flavor with the creamy, soft broccoli and cream sauce. The bigoli was the most subtle in flavor, although the little nuggets of smoked ham were delightful.

We finished with lunch at about 3pm which was perfect – we had one last sight to absolutely see in the city of Vicenza – the Teatro Olimpico, which is “the oldest and first enclosed theatre in the world”. Designed (of course) by Palladio, it was not completed until after his death. Inside the theater, one finds a dizzying and stunning example of the Renaissance world’s obsession with perspective in the trompe-l’oeil state scenery, the oldest surviving stage set still in existence. 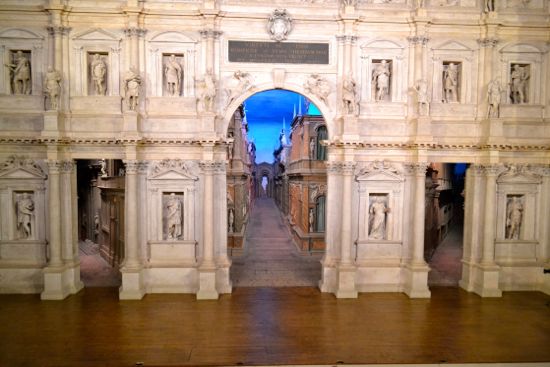 To save time after enjoying the theater visit, we hired a taxi to take us out to Villa la Rotonda instead of attempting to walk it or figure out the bus route. Considered one of the finest examples of Renaissance architecture, it has been an inspiration to many throughout the centuries – including Thomas Jefferson who used a variation of the design for his own home, Monticello. Being a Wednesday the interior of Rotunda was open as well to view the impressive frescoes, circular hall and domed ceiling. It was lovely to walk around inside and outside, taking in the natural and man-made beauty of the villa (I’d post photos but they had very strict rules about absolutely no commercial use of photography taken of and around the villa. So just visit the official villa website instead.) 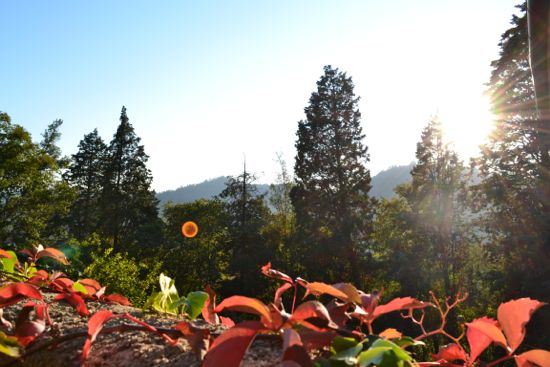 From there, we went on a peacueful (if somewhat strenuous) hike to the nearby Villa Valmarana, which had some impressive interior frescoes by Giambattista and Giandomenico Tiepolo. A bit less formal and more rustic in flavor than Rotunda, it was an interesting contrast between two Palladian villas so close to each other. We lingered in the gardens outside until closing time and then found another taxi to take us back to the train station.

It was past 8pm when we made it back to Venice proper, almost breathing a sigh of relief to be away from cars, trains and “the big city” again. Time for a late dinner on our walk back home. We wandered again through the market area near the Rialto bridge and passed by a restaurant we’d enjoyed on our previous trip – Ostaria al Garanghelo. This bustling, busy place was nearly packed, but they managed to find room for us outside. The menu here is extensive with a mixture of seafood, meat, pasta and vegetable favorites of Vencie – so difficult to know what to order! We ended up with a bit of a hodge-podge of dishes ourselves: mussels and clams in tomato broth; fritto misto; mixed seafood “stew” and ravioli with butter, sage and poppy seeds (which sadly didn’t photograph well, but the other dishes did): 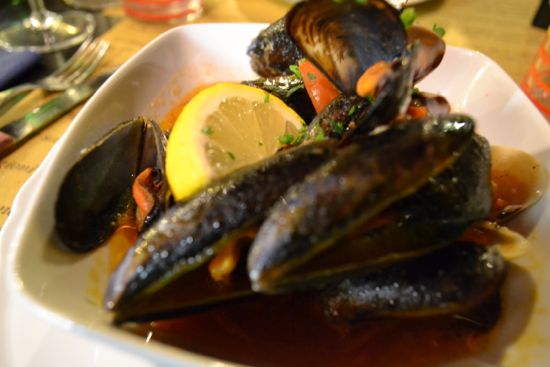 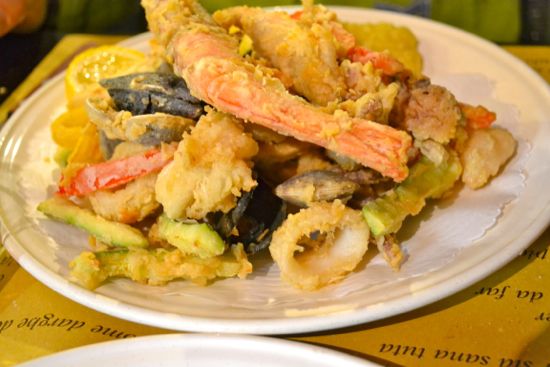 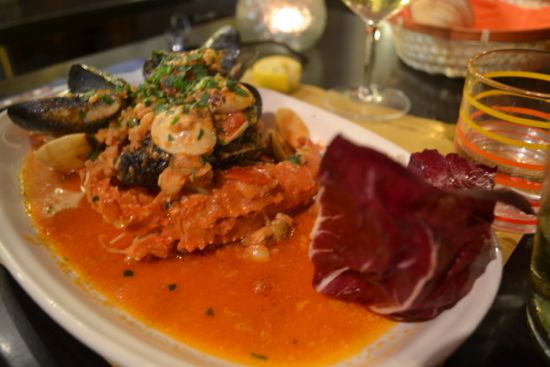 The seafood was as fresh and tasty as you’d hope for, being so close to the seafood market. The fritto misto was especially good, all the seafood fried in what was almost a tempura-like light batter and with a wide variety of shellfish and small fish on the plate (the only odd thing was the mussels and clams actually fried in their shells). I loved the interesting ravioli combination of butter, cheese sage and poppy seeds – something I want to try at home some day. Quite a lot of food and I’m not sure even we could finish it all, but we made a valiant effort and were well satisfied before heading back to the apartment for some much needed sleep! It had been a wonderful day full of food, art and architecture, amazing to have fit so much into perhaps 14 hours’ time.