It was Monday morning and after a very busy weekend, we decided to spend the day on somewhat lazy walkabout. We started out heading over the Accademia Bridge and doing some window shopping at the many galleries, mask crafters and antique shops in the area. Slowly we made our way into the Santa Croce sestieri, where we had not spent much of any time at all last trip. We stopped in a few interesting churches along the way and the lovely Scuola Grade dei Carmini to admire the wonderful artwork and ceiling canvases. It was a pleasant walk through campos and calles filled largely with students as we made our way up all the way near the train station. It really was a beautiful weather day and I couldn’t keep the camera away for very long at all…every little footbridge and passageway screamed to be photographed. 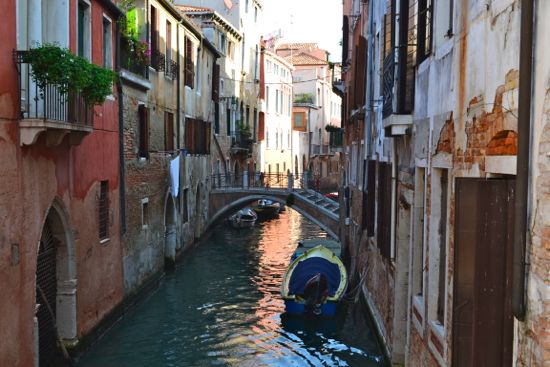 By that point it was nearly lunchtime…what shall we do with the day? It seemed like a fine afternoon to hop on the vaporetto and just ride down the Grand Canal, back toward our home base near Campo San Stefano. Near our apartment was a restaurant our rental agent had recommended, a “family” place by the name of Osteria al Bacareto. We’d stopped in for morning espresso already and I had it on my list of places to try for a full meal, so why not? When we showed up at about 2pm, the place was packed solid, and the clientele appeared to be mostly all Venetians – a good sign. Our waitress was confused at first whether we needed English or Italian menus – also a good omen!

I saw they had one of my other dishes I was craving to try again on their menu – Pizza ai frutti di mare (seafood pizza). I had the most amazing seafood pizza last time I was in Venice and for some reason hadn’t been in the mood for it yet on this trip – but I sure was now! There was some confusion as our waitress wanted to check first if they still had any dough left for the day, and they did. Yay! David ordered a zucchini pasta and their branzino, and we wanted to get their mixed cicchetti appetizer as well. Of course this turned into another place where the cicchetti platter was enough per plate to feed an army. Especially good was the mixed vegetable frittata. 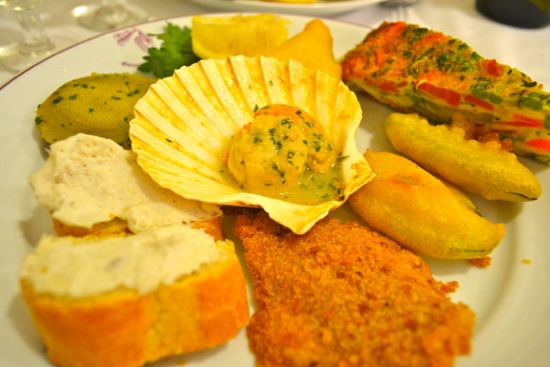 When the pizza arrived, I was in heaven. As good as my memories of an authentic Venetian seafood pizza were, this one just exceeded all expectations! The pizza was loaded with clams, mussels, shrimp, calamari and even an entire langoustine. Of course there was no cheese (that would be sacrilege!) but there was a nice coating of tomato sauce and fresh diced tomatoes as well. It was huge and yet the waitress was still apologetic that it was a little smaller than usual, as I’d gotten the last ball of pizza dough for the day. Lucky me! 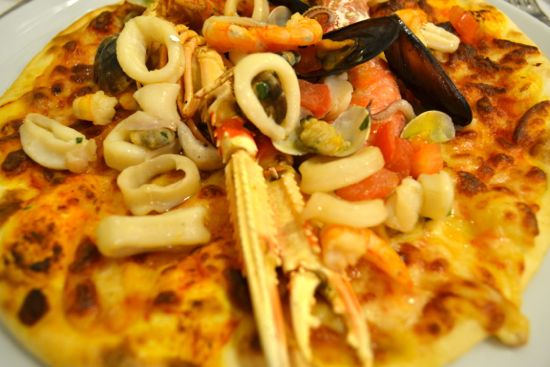 David’s zucchini pasta and branzino were both quite good, what little bit I tasted while working my way through the overloaded pizza. 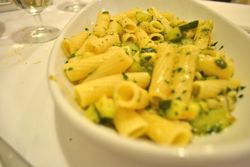 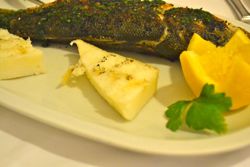 After all of that good food, time for some more walking. We headed toward Piazza San Marco to finally revisit the interior of the beautiful Basilica, which was fortunately not that crowded with tourists that afternoon. After touring the museum upstairs we stopped for some of the glorious views looking out over the piazza and the Doge’s palace. 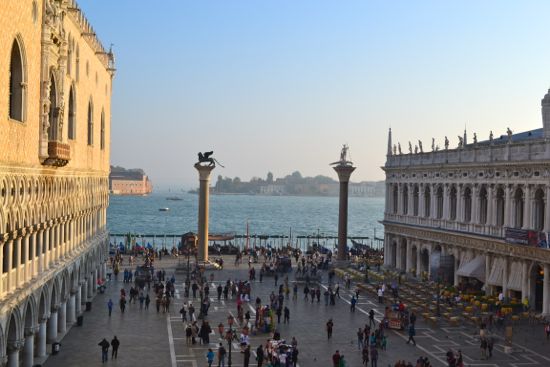 From there, it was a leisurely stroll along the Riva until we ended up near Via Garibaldi just around sunset. Away from the tourist crowds in Castello, we found a nice table outdoors to enjoy an evening spritz or two – and marvel as not one but two ginormous cruise boats glided by so close they looked like they were about to run aground! 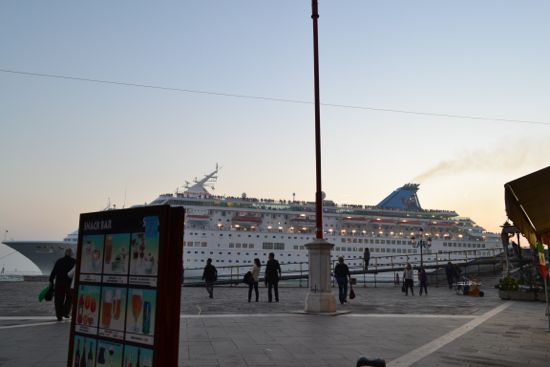 We eventually picked up and set off walking again, slowly making out way back toward our “home base” while doing a little more window shopping along the way. Dinner? Well, we were being lazy and decided to go back to a beccafico as it had been so good the first time and it was still a warm and beautiful night to sit outside and dine. We were immediately recognized by the waiters who had served us lunch the other day and treated graciously like regular customers already.

We HAD to get that incredible marinated seafood antipasti again – and that evening it even came with a few additions we hadn’t had at lunchtime including branzino. Everything else was just as glorious as before. On recommendation we also ordered their Zuppa di Cozze (Mussel soup) – which was a visual stunner when it hit the table. The large bowl of mussels was encased in a puffed-up cover of bread which had been baked over the bowl! Upon piercing the bread, it released the exquisite aroma of the mussels in their tomato broth. The light bread was also just wonderful for sopping up the broth and enjoying every last bit of the delicious juices. Wow. This is a dish I am desperate to try to recreate at home. I’m only sad the photo I tried to take of the bowl as it first arrived came out too dark and blurry to appreciate it! 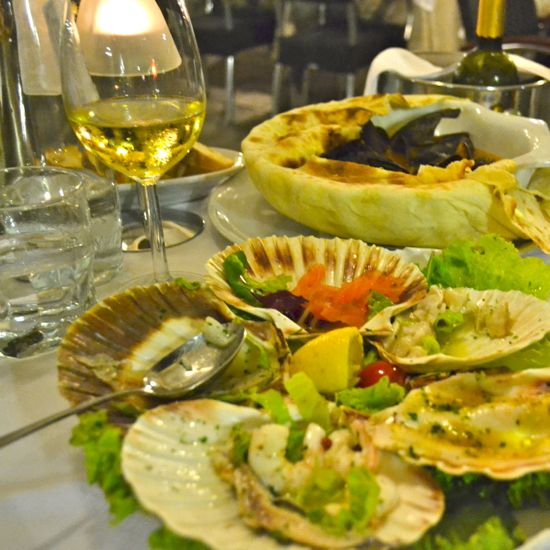 On top of that, we also shared a delightful pasta made with shrimp, cherry tomatoes and squash blossoms, along with grilled sardines prepared in a Sicilian style with the best eggplant caponata I’ve ever had in my life. 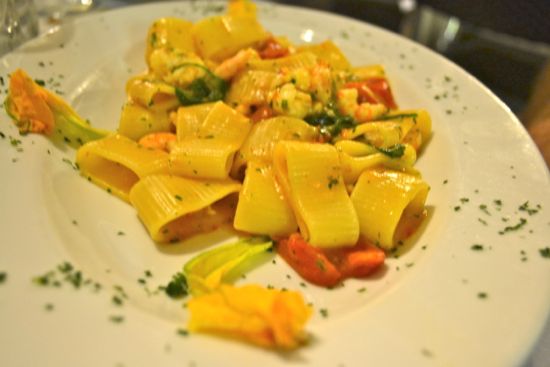 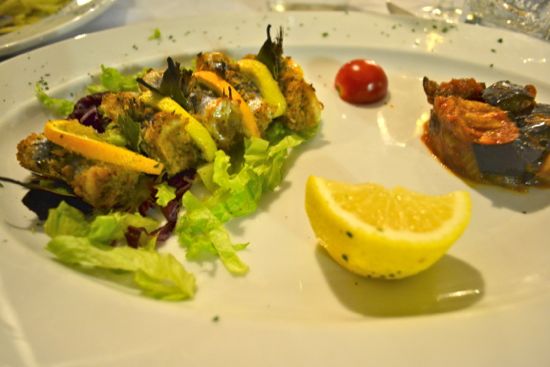 Don’t ask me how we had any room for dessert, but we did manage to share a slice of a sweet Sicilian cake with marzipan, candied fruit and pistachio. 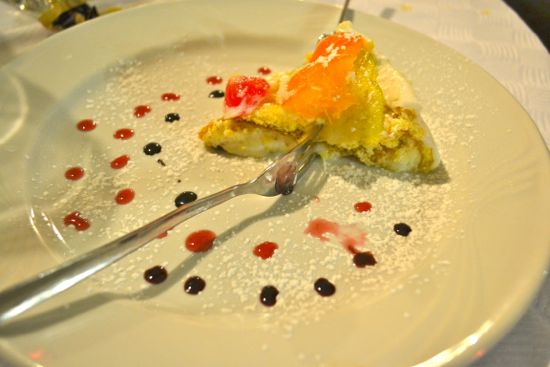 All told I feel like we didn’t do much all day but eat, eat, eat – but it was all damn fine eating! Without question a beccafico provided us with two of our most memorable and delicious meals while in Venice this trip. We even planned on going back for a third time if possible but alas, timing (and weather conditions) just didn’t end up allowing it. Oh well, something to look forward to in the future, I suppose…