The previous day had been so overwhelming and busy we slept in quite late the next morning, not in any particular rush to get anywhere. We lingered about our apartment before going for a late breakfast at what was already becoming our regular morning hangout: Bar Spritz. Some mornings it was a cafe and a brioche, but on a later morning, one of their savory croissants or sandwiches was more in order to start the day. If we arrived early, there was a tiny old lady who would show up about 9:30 for her morning birra. When teased she would profusely deny the appropriateness of anything heavy to drink (god forbid grappa!) early in the day. But beer? Totally perfecto in the morning. One glass and she’d be off for the day’s errands.

Me, I stuck to an Americano or two and one of these: 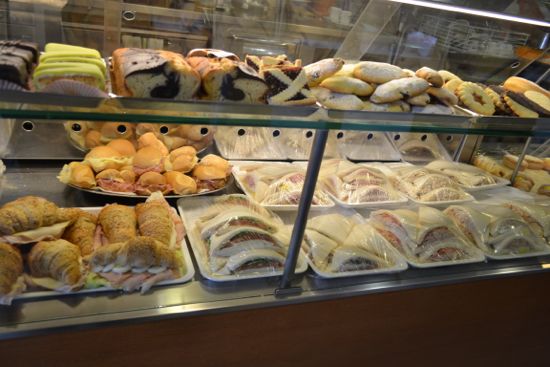 After breakfast/lunch we set off to revisit one of our favorite art landmarks from our previous trip to Venice: the Scuola Grande di San Rocco. The Scolas were, in effect, mens’ clubs of Venice in the Renaissance, but dedicated to doing charitable/good work for the city as a whole. The incredible Venetian painter Jacopo Tintoretto provided more than 50 massive paintings – at no charge – over decades to fully “decorate” the Scuola and they are some of the most stunning and original works of art I’ve seen outside of Da Vinci’s Last Supper and Michelangelo’s Sistine Chapel.

Tintoretto is not as well known of an artist outside of Italy/Venice as these other Renaissance legends, yet my visits to Venice have lead me to have incredible awe and admiration for this man who was, apparently, supremely humble and devout despite his immense talents. I have to admit, I also admire him because of the stories of his intense dedication to his artistic daughter Marietta, who managed to follow her father on commissions and to work in his studio by dressing as a boy in a time when women were largely refused from artistic commissions and work. But beyond that, Tintoretto’s work has incredible power from his use of light and dark contrasts, unique angles and motion, and daring to take on traditional subject matter in new and inventive ways. There is something about his Crucifixion in the Scuola that I could stare at for days without being able to ever tire of it nor take it all in. To me it is one of the most powerful and incredible paintings ever, not just in its size but in its artistic and emotional composition.

But, this is a food blog and not an art blog. I’ll save my intense love for Tintoretto for another forum, someday…

After the Scuola, we ended up going to mass at the nearby Basilica dei Frari – because there is nothing like attending mass in a church under a massive painting by Titian (even if under restoration) and pondering all those who may have attended mass in this glorious basilica in the past.

At this point, it was into the early afternoon and we were both well ready for a good lunch. My trusted 24 Great Walks in Venice book which had recommended our excellent lunch spot on Murano yesterday had a similar recommendation for an inexpensive, local and authentic osteria near the Frari, so I decided we would hunt it out. That was no small challenge given the narrow and windy calles of the area, but eventually I found our way to Osteria Al Ponte “La Patatina” – the restaurant which perhaps would be our fondest foodie hangout in all of Venice for this trip.

“La Patatina” is not easy to spot from the street, with just a small lantern hanging outside and its main doorway very nearly concealed on a narrow street. But stepping inside we were greeted with a bustling, crowded space filled with tightly packed tables – and a slew of gondoliers! I took that as a very good sign that this was not just a tourist trap but a place where the “real” Venetians went to eat. Indeed, it took about 5-10 minutes for our servers to squeeze through and clear off a tiny table (next to two gondeliers) for us to sit. But the menu looked divine, featuring just about nothing but local Venetian favorites: grilled local fish and pasta, housemade salami, cichetti platters and simple meat & chicken dishes for the gondoliers who needed their protein fixes for their afternoons ahead. 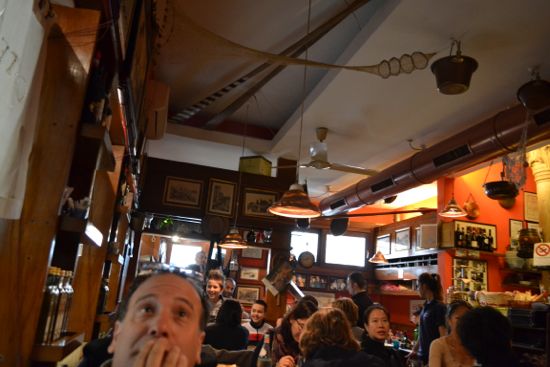 Inside Patatina. David ponders what to order.

I saw a plate listed as “Cicchetti Fantasy” on the menu as an antipasti and had to order that as my starter. The waiter asked “for one or two” and I said one because David wanted to try the salami and polenta. I don’t know whether he misheard me or thought I had a REALLY big appetite, because this plate was considered an antipasti for one: 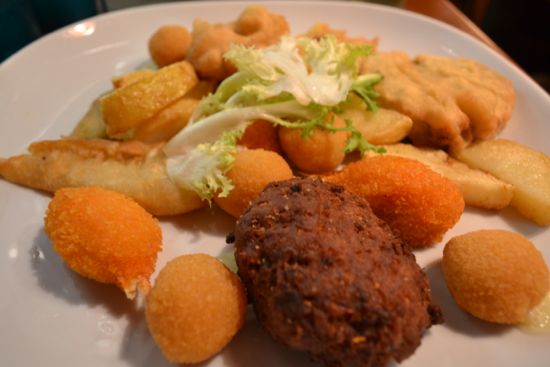 Honestly it was obscenely huge: a large meatball, deep fried ham and cheese sandwich, breaded crab claws, fried cheese balls, eggplant and potatoes. Yikes! I ate what I could – it was all good – but gave a lot to Dave who especially loved the ham and cheese. His salami was really amazing as well. 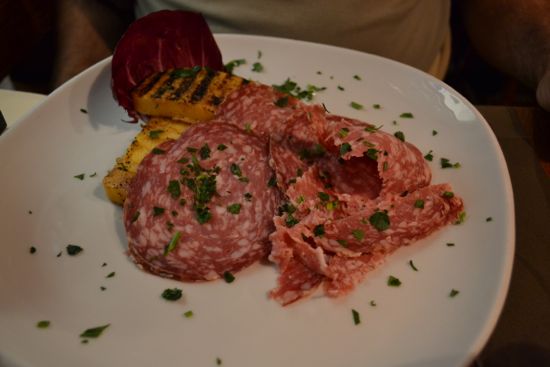 We still had two pasta dishes coming, one featuring scallops and a pistachio pesto sauce, the other squid ink pasta with shrimp and zucchini in a rose sauce. Somehow we made some room for them because the pasta was too tasty not to enjoy as much as possible. 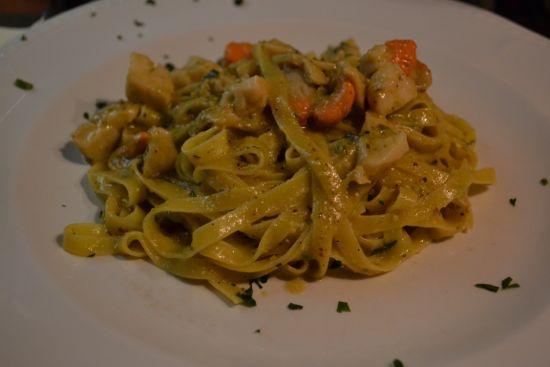 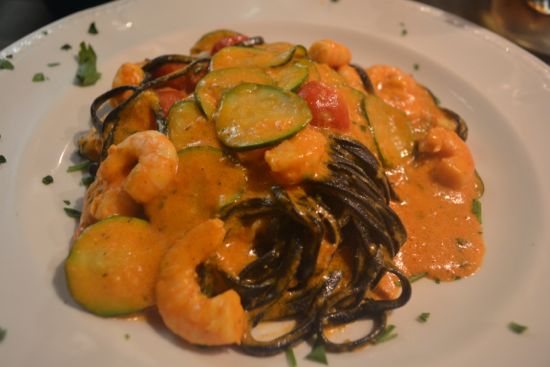 After that there truly was, for one, just no room at all for dessert. With house wine and espresso our total bill was $112 US – not bad at all given the ridiculous amount of food. We made definite plans to come back for another meal – but for now we had to attempt to roll out the door somehow.

For the afternoon, I had it in my head to visit one of the lesser known lagoon islands, Lazzaretto Nuovo. I’d become a bit obsessed with reading about these curious, now largely abandoned islands which served many different functions in the history of Venice: sometimes as fortresses, sometimes as monasteries, sometimes as mental institutions or in the case of the Lazzarettos, plague islands. Lazzaretto Nuovo was primarily an island of decontamination and quarantine, where goods being delivered to Venice (and the merchants/sailors delivering them) would be inspected and have to wait out time before passing to Venice, to be sure they didn’t carry the plague. It was also a rehabilitation facility for those who had, by any miracle, survived the plague.

But even on this detention/rehabilitation island, many died and mass graves are still being uncovered. You might remember the news story from a few years back about the “Vampire” skull found in a mass grave on Lazzaretto Nuovo, for instance. Call it morbid curiosity but I wanted to see the place, which is open for visitors on weekends only from April to October, once in the morning and once in the late afternoon. 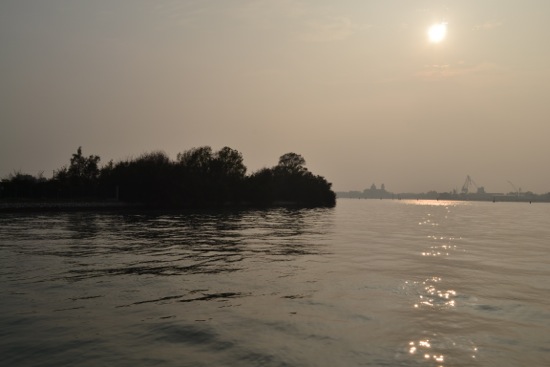 We took the vaporetto from Fondamente Nuove, which was a pleasant ride past San Michele, Vignole and several other lagoon islands before stopping at the Lazzaretto Nuovo stop (you must inform the vaporetto staff you want to stop there, and turn on the dock light to signal you want to return.) Several other curious tourists – all Italian – got off with us that afternoon and we were quickly greeted by the island’s unofficial tour guides of the feline variety. 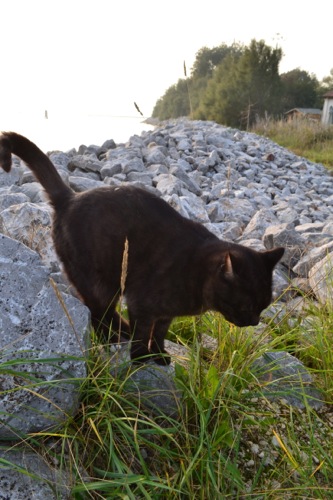 Soon our official tour guide arrived, a solitary man who only spoke Italian and lead us into one of the remaining quarantine facilities on the island. The entire place had an eerie, ghostly quality to it – yet a haunting beauty as well. 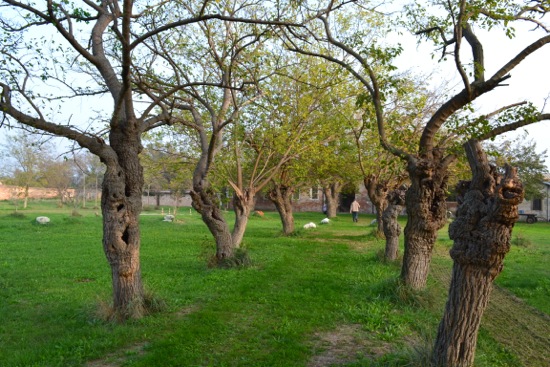 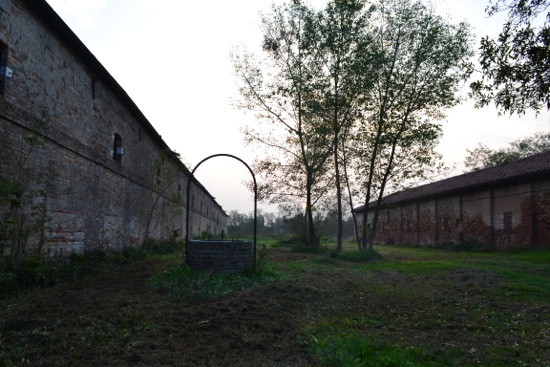 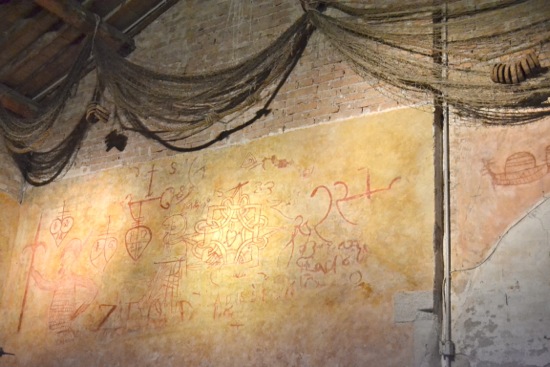 Inside the quarantine building, the walls were covered with centuries old graffiti and cases contained archeological finds from bone fragments to old bottles, glassware and medical supplies. We were shown a brief film on the history of the island (sadly only in Italian and with no subtitles), then lead around through the various exhibits before going back outside to tour some of the rest of the island. 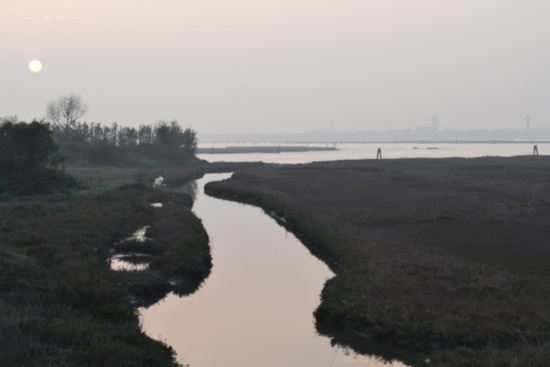 All told the visit took about an hour and a half, after which we were lead back to the dock to wait for a passing vaporetto. The island cats kept us company and welcomed pets and scritches – which were soothing as well to the humans after the time spent contemplating death, plaque and isolation in this haunting place in the Venetian lagoon. 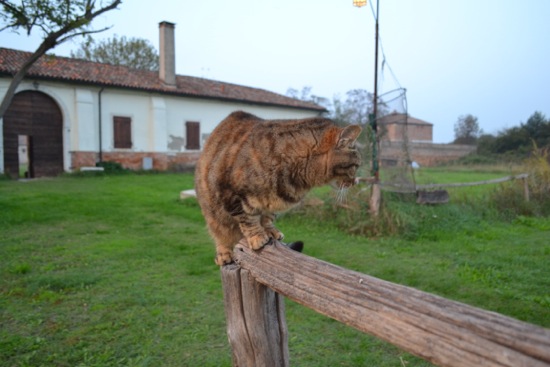 We returned to Venice proper sometime past dusk, enjoying a slow walk back toward our apartment as it was a clear and pleasant evening. After such a large lunch, we really weren’t very hungry and it was still somewhat early in the evening. What to do? Well, we had passed Chiesa di San Vidal several times and it was right near our apartment, and hosting live chamber music concerts just about every night. We stopped by and sure enough tickets were still available for that evening’s performance by Interpreti Veneziani, so we bought tickets, changed clothes and chilled for a while, then went to hear the music. That evening they were performing (unsurprisingly) Vivaldi’s “The Four Seasons” along with several other pieces. It was simply wonderful hearing this music performed in such a beautiful atmosphere, and by an energetic and delightful ensemble of musicians. Especially compelling was Davide Amadio, their violoncello player who expresses all of his emotion vividly into every piece he performs. (Not my video linked here, but a wonderful sample of his playing, and the atmosphere within San Vidal):

When the concert was over, it was past 10pm and we still weren’t very hungry but something light was in order. Most of the restaurants in our campo were closing for the night, but we were able to snack (and enjoy a few glasses of wine) at Bacaro Da Fiore, the small bar connected to the Trattoria Da Fiore where we’d enjoyed our first lunch in Venice. The bacaro offered a full range of cicchetti delights, so we assembled a plate to share of some creamed cod crostini, fried sarde, marinated onions, chicken wings and other nibbles. It was just a perfect way to finish off the night, and we lingered until just about closing time. 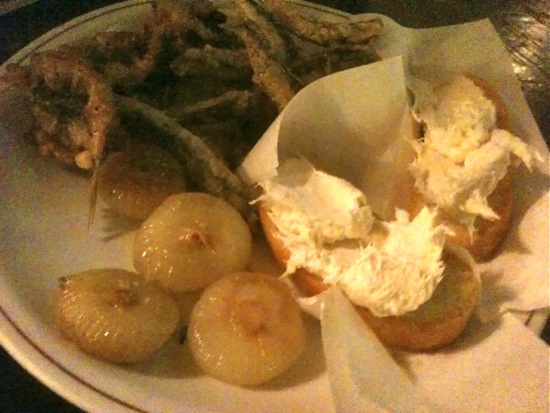