Day three in Venice was a whirlwind that is exhausting for me to even begin to write about!

We set out with a plan to spend the bulk of our day on Murano – last trip we’d only touched down there briefly (spending all of a day on Burano and Torcello instead). I’ve been a collector of Murano glass for years and we had it in our heads to shop for a chandelier for the house this trip. But getting to Murano meant a decent hike up to the Fondamente Nuove vaporetto stop first. This was fine as there were several spots along the way we wanted to check out – including the incredible Church of Santa Maria dei Miracoli which had always been closed every time we passed by it last trip. Fortunately this time the doors were open and we were able to admire the incredible (and dizzying) interior of this beautiful church – restored in 1987–1997 and partly funded by (you guessed it) Save Venice.

After that David was on a mission to track down Titian’s house and gardens. He had hand-written notes on where to not only find the front door, but where to go to try to get a peek at what remained of Titian’s gardens. I’ll refrain from commenting beyond sharing this picture. And yes, I was glad no one was around to observe us… 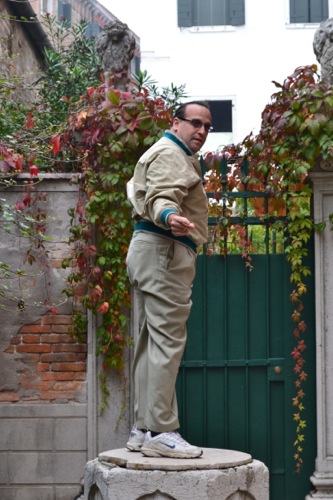 It was a misty, cloudy morning when we boarded the vaporetto, which filled up quickly with Venetians carrying flowers to the cemetery island of San Michele. Again, we’d never been there before so I suggested we hop off for a quick detour – I have a strange fascination for cemeteries and cemetery photography. It was only during the 19th century and French occupation of Venice that law declared no bodies could be buried on Venice proper for sanitary reasons, and San Michele became the official burial island. Of course, due to space restrictions unless you are from a very well-to-do or important family, burial on San Michele is a temporary thing only. After about 12 years one can expect to receive a letter demanding payment for the remains to be interred elsewhere, or they are dispatched to an ossuary. But in the meantime, Venetians take immaculate care of their loved ones’ temporary resting place.

It was only upon our departure from San Michele that I saw the notice that photography was not officially allowed on the island. Although I was careful not to take any images of the living while there, I do not feel it proper to share, then, the haunting photographs I took of the island – besides this one taken while peering through the island gates into the mist and Venice beyond. 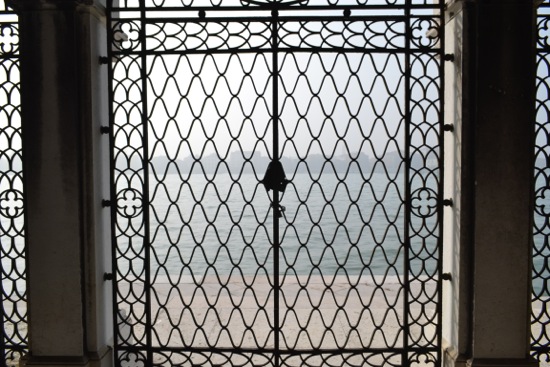 Needless to say we were rather relieved to reboard the vaporetto and head off to Murano next. Murano has long been the home of Venetian glassmaking, as glass makers were isolated there in the 13th century to prevent their furnaces from burning down the main islands. The secrets of Murano’s glassmaking have been closely protected for centuries, and the sense of isolation – and guardedness – even pervades the island today. While on weekdays some of the furnaces open their doors to tourists, you won’t see the “real” artisans at work quite so easily. We certainly didn’t as this was a Saturday and we found most of the better glassmakers closed for the weekend. Ah well, it was still fun doing some window shopping and picking up a small item or two… 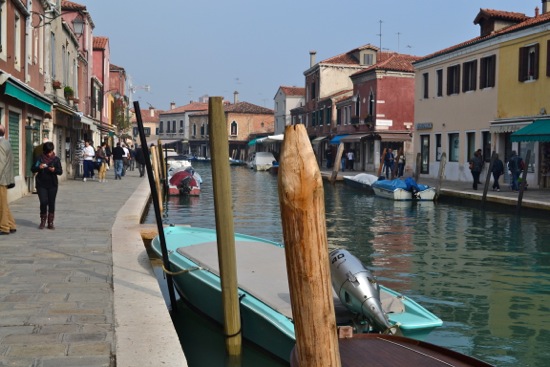 Along one of the main fondamente pathways of Murano.

It was getting on to almost 2pm in the afternoon and I was starving! In one of my travel books I’d read a recommendation for B Restaurant Alla Vecchia Pescheria as a good place to go for fish, away from the main tourist/shopping paths. Indeed, the restaurant is tucked away in a quiet campo and even at 2pm was busy with tourists and locals alike. It was nice to sit under the shade of an umbrella and rest for a little bit after an already quite busy morning.

Our wonderful seafood antipasti the day before at a beccafico encouraged us to try one of the mixed seafood starters at B Restaurant to compare. They offered several different “sizes” and assortments, so we went for one of the mid-priced ones – which was more than enough deliciousness for us to share: polenta with stewed codfish, octopus salad with celery, grilled scallop in oil and lemon, salmon with purple onions and a light green mesclun salad. All delicious, and again beautifully plated. 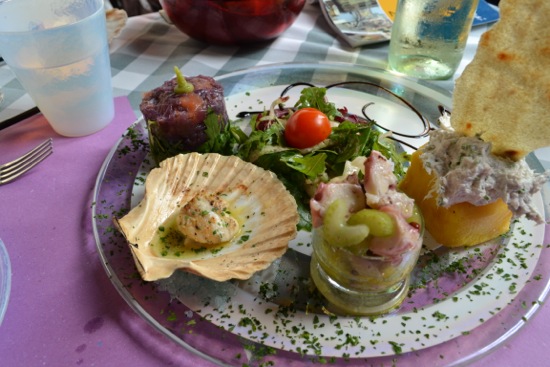 I’d spotted on the menu one of my favorite pasta dishes which I’d enjoyed last trip to Venice: Tagliatelle with spider crab, cherry tomatoes and rosemary. It was served – as I’d hoped – spilling out from the crab shell and was bright and flavorful, the tomatoes lightly wilted and just enough rosemary to add an unexpected herbal bite. 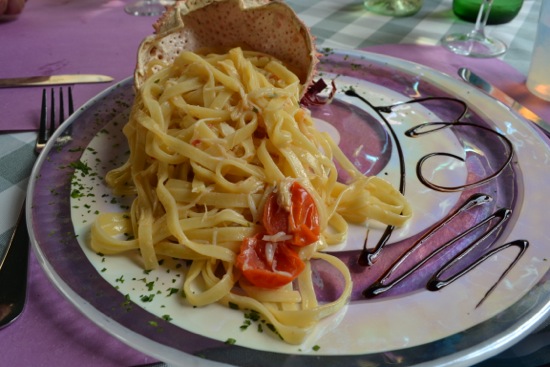 David had the seafood risotto – B Restaurant was one of the few we visited during the trip that would prepare the risotto for one and not a minimum of 2 people. That might seem to be a bad sign (ie, risotto prepared in advance instead of order), but we waited long enough for it to arrive to know it had been made fresh. I think the picture speaks clearly for me of how wonderful this was: 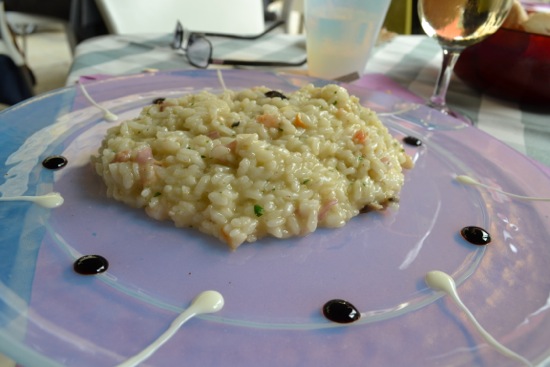 I don’t recall what we had for dessert though I’m sure David ordered something, as usual 🙂 Our total with wine, water and espresso was $109. This meal definitely was a good one and I’d recommend B Restaurant to anyone who finds themselves on Murano for the day.

After eating we continued exploring the island, visiting two of the churches and wandering through some of the residential parts of Murano. Everywhere you look on Murano there is glass to be found – although even in the island’s shops one must be careful that it’s not imported from China. We didn’t find the chandelier of our dreams that afternoon but decided we might return later in the trip, on a weekday when more of the shops and furnaces were open. 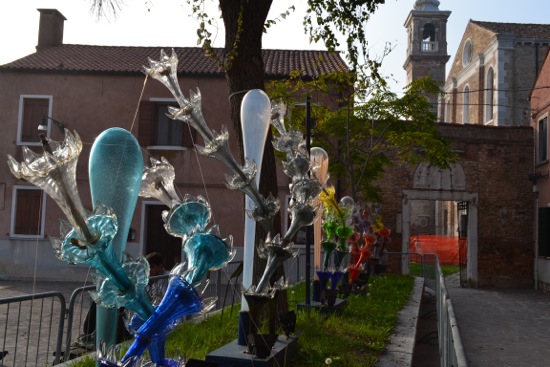 The vaporetto ride back to Venice was lovely just past dusk as night began to fall over the lagoon. We contemplated our evening plans – I honestly was not especially hungry yet, but David wanted to find the restaurant we’d passed the night before on our gondola ride. I was still rather haunted by the cemetery island, which was particularly beautiful in the creeping darkness as we landed once again at Nuove. 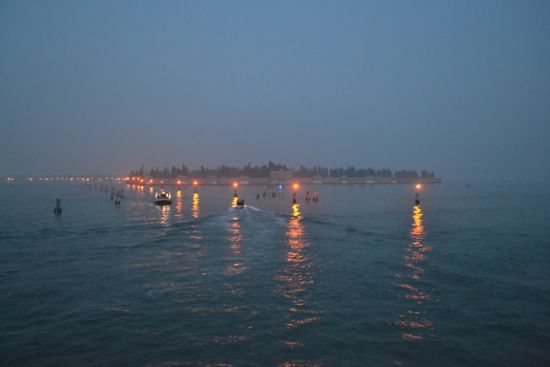 I had studied a Venice map and compared it against my gondola pictures in the morning to figure out where our mysterious restaurant likely was. Sure enough, we found it on Calle del Magazen in Cannareggio – it turned out to be Ristorante/Trattoria Al Vagon, a large complex that was part of the Al Vagon hotel. The outdoor dining area was empty when we arrived, so we had no trouble getting a table right along the canal for our meal. I was a little dubious eating at a hotel restaurant, but the trattoria menu appeared reasonable and soon after we sat down, a local Venetian pulled his motor boat up to the hotel dock to have dinner with his date here as well. I took that as a good sign.

The menu at Al Vagon featured much of the same Venetian standards I was accustomed to seeing after three days – but I still wasn’t all that hungry! I decided to order very light and stick with fresh fish: a spider crab antipasti and grilled seppie. David ordered a spaghetti bolognese to start followed by the grilled salmon steak. With this we shared a small carafe of fine house white wine. 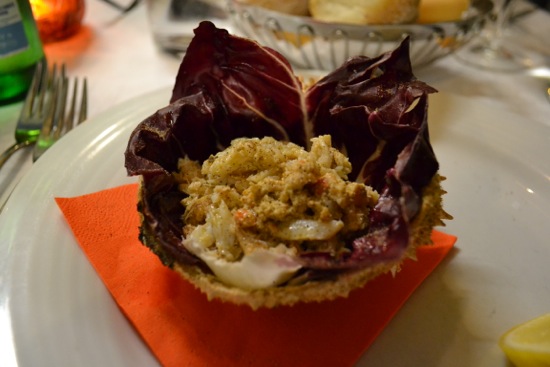 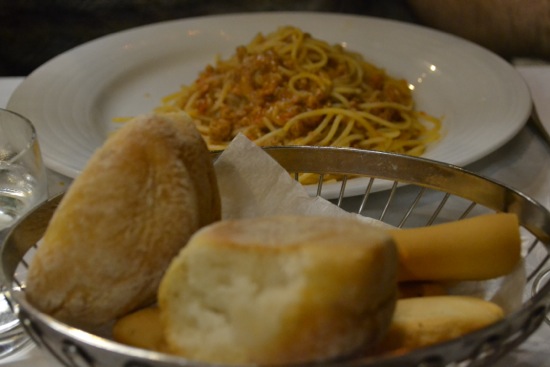 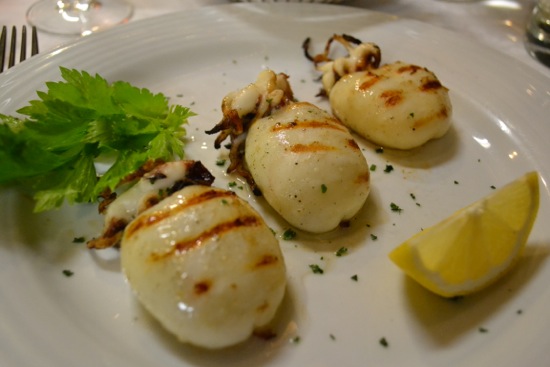 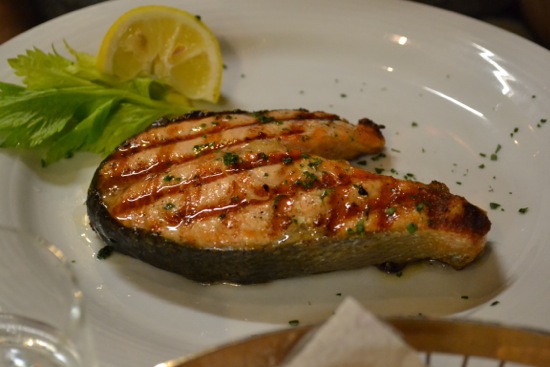 Of these four courses, the only one that was a bit disappointing was the spider crab. It had too much black pepper for my taste (as you might even be able to see from the photo) and also a few bits of what seemed like crunchy shell bits in the meat I had to be careful of. Fortunately the fresh lemon served with the crab killed much of the pepper overload. The bolognese sauce was well made in a true dry, Northern Italian style that I like, and both of the grilled fish secondi dishes were outstanding (David loved his salmon so much I barely got a taste of it. But then again, I didn’t share much of my seppie, either.)

It was fun lingering on the covered portico for a few hours, with little passing traffic save a few gondolas and motor boats (oddly enough, many of them filled with young Venetians blasting techno-dance music…perhaps it was the Venice equivalent of Saturday-night cruising?) Service at Al Vagon was what I consider “Italy-standard” – as in, pretty much ignoring you until you actively flag someone down but not necessarily rude. We had to remind our server of our ordered semifreddo dessert at one point, but then it was quickly brought out with apologies and (if I recall correctly) some gratis shots of limoncello.

The total bill was $123 with our order above as described, plus an espresso and “Cafe Corretto” (espresso with grappa) for me (funny how every restaurant tries to give the corretto to David, even though he hates grappa. I’m the one with the taste for the Italian rotgut!) Given the exceptional quality of the grilled fish we ordered, I would certainly return to Al Vagon again in the future – hopefully on an evening when I had more of an appetite to savor a full meal and wanted to enjoy the lovely, calm atmosphere again.