The Mussel Bar at The Revel, Atlantic City NJ

Two weekends ago found the sweetie and I making our first excursion to Revel, Atlantic City’s latest gambling/dining/entertainment attraction to see Duran Duran in concert. Sadly, the universe decided that the concert would not be in the cards for us that night as Nick Rhodes apparently fell sick – ill enough that the rest of their entire U.S. tour was cancelled!

Determined to make the most of the evening nevertheless, we ended up lingering over a very excellent dinner at Mussel Bar by Robert Wiedmaier after browsing around many of the different dining options available at the resort. Since we’re so close to Philly, there was no big draw to try one of the Jose Garces’ copies at Revel. Mussel Bar is apparently a copy as well – of Wiedmaier’s Washington DC-area establishment. Still, it looked appealing and a little different from the other offerings available, so we decided to give it a try.

It was about 7pm on a Saturday night when we went to get seated. There would be either a 30 minute wait for a table “outside” (as in, along the busy thoroughfare and across from Garces’ Distrito, with a lot of competing music blasting) or we could sit at the high-top bar inside. We chose the high-top, which was great as it gave us a perfect birds-eye-view of the restaurant’s open kitchen. The kitchen has numerous different dedicated areas: a salad prep section, a cheese and charcuterie station, a wood-fired oven for their pizzas/Belgain tarts, a fry station and grill and of course a back area where the mussels are prepared in one of five different ways. The menu features a variety of small to large offerings, many of which were tempting us such as the Calamari a la Plancha, Duck Salad, Wood Fired Barnegat Scallops or the Smoked Pork Belly Pizza. But mussels were what we were really in the mood for, and they are served in two sizes – the larger coming with frites. I chose the Mediterranean version (Merguez Sausage, Goat Cheese, Cilantro) while the sweetie picked the Cave Aged Gruyere (fingerling potatoes, pancetta, gramolata, garlic and leek broth.) We also decided to get an appetizer special of the night of short ribs in a pine nut sauce that sounded intriguing.

Mussel Bar features a great selection of Belgian beer on tap, so that’s really the way to go and they’re not badly priced for Atlantic City. I really enjoyed a Chimay Tripel with the short ribs, which were just truly fall-off-the-bone tender and lovely with the pine nut sauce. My mussels, too, were very good and satisfying, the cheese and sausage making it a very filling meal with lots of great sauce to mop up with the crusty bread supplied. I also enjoyed the three different sauces served with the fries, which were thin cut, crispy and hot!

Somehow our waitress tempted us into dessert despite full bellies, and this was a good thing as the Chocolate Stout Brownie with ice cream and caramel sauce was out of this world. I could have swum in a bowl of that caramel sauce if possible. This was also the only dish I got a semi-decent photograph of, given the low light in the restaurant. But trust me, it was 100 times better than it looks: 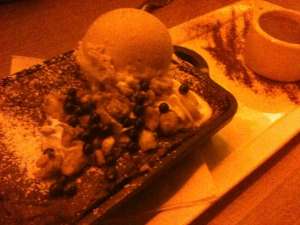 My main complaint about Mussel Bar is the service was a little rough around the edges and could use refinement, given the AC prices involved. When we were seated, a leftover basket of half-eaten bread from the previous diners was left on our counterspace until I pointedly moved it to the side and right before our appetizer arrived. Drinks took some time to receive after ordering, even though we were only ordering beer & wine, not specialty cocktails. Also, runners seemed confused about which dish was which: when our mussels were brought out, we were asked who had which version, we answered – and were given the wrong plates nevertheless.

All told, however, I would definitely return to the Mussel Bar as I enjoyed all the food and given we were in Atlantic City, the prices seemed reasonable for what you got. Maybe it wasn’t as good as getting to see Duran Duran, but at least I went home with a happy stomach – and a couple dollars in winnings from the slot machines to boot!