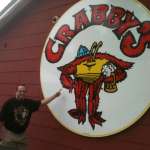 The other weekend, the sweetie had a hunger for some crabs and suggested we head on out to Crabby’s in Mays Landing. He’d been there before, I never had but was up for giving it a try. He warned repeatedly that it was definitely a bit of a “dive” but when it comes to crab joints, what do you expect?

I checked and sure enough, on Sundays Crabby’s offered all-you-can-eat blue crabs “Maryland style” (ie, spicy and dirty). They have different all-you-can-eat specials daily, along with a regular menu of various standard seafood offerings: clams, oysters, seafood combos, seafood and pasta dishes, etc. But every review of Crabby’s I read said stick with the basic: crabs and beer. Seemed like wise advice. 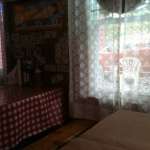 Crabby’s doesn’t look like much from the outside but it’s hard to miss with its large sign and painted crab on the outside. Inside, it’s not much to look at either: a central bar, basic brown-paper covered tables, dollar bills tacked on the ceiling and walls in odd places. We arrived around 5pm, along with several other groups of diners, so it took a few minutes to get our seating sorted out. The all-you-can-eat blue crabs were $38.99 a person and came only with fries or pasta. They have a few selections of passable wine by the glass in the $7-9 range along with of course nice offerings of beer on tap. Service was a little gruff and slow, although after one large group left they did nicely offer us to move to their better table, away from the door where we’d initially been seated.

Our first trays came out fairly quickly, with 6 nice-sized crabs on each. Cocktail sauce was available on the table along with hot sauce that came with each. It might have been nice to have some lemon and/or melted butter as well, but, I wasn’t going to fuss too much. With a roll of paper towels and a bucket for shells handy, it was time to dig in to some tasty, spicy crabs! 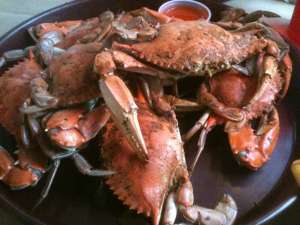 We did manage to ask for and polish off a third tray of crabs between the two of us, before calling it quits (though I think my sweetie could have gone for a few more if we’d wanted to linger a bit longer. I had the fries as my side and they were quite good, hot and crunchy, about medium thick-cut. All in all I definitely enjoyed the experience – and the crabs! – and would come back to Crabby’s again any time we’re in the area.

One Response to Crabby’s in Mays Landing, New Jersey