While in the Hunt Valley/Cockeysville area for a convention this weekend, I found myself craving some fresh and healthy sushi as a break from the typical heavy/fast food con fare. Umi Sake was located close to my hotel and seemed to get good reviews, so I decided to give it a try. Overall, I can’t say I was impressed enough to definitely want to return again when next in the area (which is at least once or twice a year for cons and other events).

Umi Sake is located on a fairly busy section of York Road, and the parking lot was certainly full when I pulled in around 7:30 on a Saturday night. I like to sit at the sushi bar when dining alone at a Japanese restaurant – it’s more comfortable and also gives me a chance to get a good look at how the sushi preparation is done (also spy what’s going out to other tables too.) The sushi bar at Umi Sake isn’t especially large – it also serves as the drink bar, cashier stand and is right near the kitchen, so it’s a very busy spot. Indeed I spent most of the evening watching my shoulders and elbows for waitresses constantly reaching across to grab orders or asking about the status of orders which had been waiting to come out for too long. The four sushi chefs behind the counter (all but one shouting to each other in Spanish) were constantly in motion as well. Needless to say it made for a somewhat tense environment, not the relaxing dining experience I’d been hoping for. It also didn’t help that in the middle of the sushi bar was a large “molten rock” heat lamp of some kind, right near my seat. This wasn’t especially comfortable either after coming in from 90 degree either outside.

Nevertheless, I ordered a house sake and started browsing Umi Sake’s considerably lengthy menu, including multiple pages and cards of Maki Rolls. Indeed, there are the Signature Maki listed on their website, then a placard of special makis, then another entire page on the menu (not on the website) of more weekly special makis. Most were all the typical fusion Americanized rolls full of fried tempura, cooked crab and/or shrimp, tempura “crunchies”, mayo, cream cheese, and lots of different sauces. Some of the offerings include the “Tropical Paradise Roll” (salmon, strawberry, avocado, tobiko, cucumber wrapped with tuna mangy served with blueberry sauce) and the “Perfect Fantasy Roll” (shrimp tempura, crab mix, cream cheese roll and topped with eel and avocado and tempura flakes). I probably should have perhaps tried a couple of these fancy fusion rolls as that’s what seemed to predominantly be going out to other tables (I seemed to be the only person who ordered a “classic” sushi plate instead – perhaps a sign). But I wanted clean and light flavors; I also want to see what kind of quality fish a sushi place is serving first and that can be hard to tell when covered up with too many sauces and other flavors.

I decided to order my standard “test” dish (also my favorite sushi plate in general), the Chirashi, $17.95. I was a little surprised when the waitress seemed confused when I asked if it came with any miso soup and/or salad – which is pretty much the standard at any sushi restaurant I’ve ever been to except for a fast food-style place. The answer was no, which on one hand I was okay with as I’d rather try something else as an appetizer instead, but on the other the price was what I’d expect to pay at a restaurant including soup/salad, but whatever. I ordered a spicy tuna handroll as an appetizer – though in actually ended up coming out the same time as my chirashi. 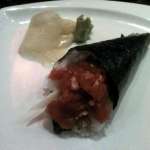 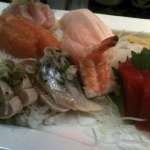 Indeed, after waiting for quite a while I was getting increasingly hungry – the sushi bar seemed backed up on some large orders – so I asked to add on a seaweed salad as well. That came quickly and was fine. Soon thereafter I received my chirashi and handroll together. I was immediately disappointed by the appearance of the chirashi – I really do prefer it as traditionally served in a bowl or box of rice, topped artistically with fish, pickles, seasoning and generally some tobiko or salmon roe. This was more like sashimi served on rice on a flat plate, which just had a little sesame seeds sprinkled onto it. The texture/flavor of the fish wasn’t bad, although the mackerel was poorly cut – I had one piece that was a tiny little sliver of mostly skin – and the shrimp rather limp and overcooked. Some pieces were a bit soft to me and while nothing tasted “off”, I didn’t have that burst of fresh flavor and firm texture that scream of the best quality sushi. I did enjoy the handroll, although it was almost TOO big – I was getting really full very quickly, although my stomach could have been tensed up from the frantic activity all around me as well.

All together my total was about $45 with tip at the end of the night. As said, I wasn’t really impressed enough to make Umi Sake somewhere I’d go out of my way to visit again, and I’d definitely bypass the traditional sushi plates as I was not really impressed with the chirashi. Perhaps the fancy rolls or kitchen entrees (Umi Sake offers a variety of hot Chinese, Thai and Japanese cooked offerings) are better and explain the large crowd of diners.