Yesterday for lunch I finally resisted finishing off the rest of the Tomato Sauce with Butter and Onion straight from the bowl, and tossed it in with some potato gnocchi. Just like Marcella Hazan says, this is a combination made in Heaven. 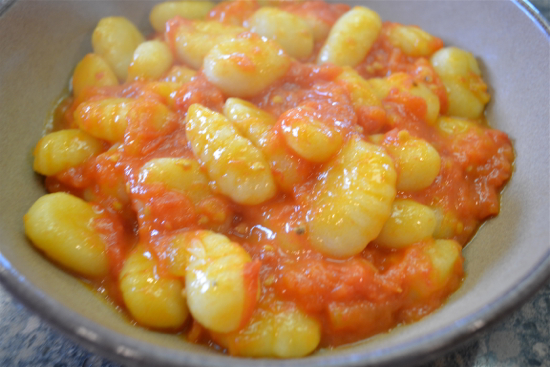 Since I am going to be away from home for a few days, I wanted to use up some odds and ends of fresh vegetables – and some Italian bread that was a bit old. Of course the idea of making a Panzanella salad immediately came to mind. While I love the concept, I haven’t always been keen on other versions I’ve tried of it. Usually there’s a lot of cucumber in panzanellas, and I’m one of those people who seems to have a genetic taste-repulsion to cucumber and melon (yes, that’s a real thing).

After browsing through a couple cookbook versions of the salad, I actually was intrigued by Ina Garten’s panzanella recipe. I liked how instead of soaking the bread for the salad, as is generally traditional, this recipe has you toast the bread in olive oil on the stove top first (I’m sure you could also oven-bake it too). I did substitute in some lightly sauteed tender young zucchini for the cucumber she includes in the recipe. I really liked how it came out. 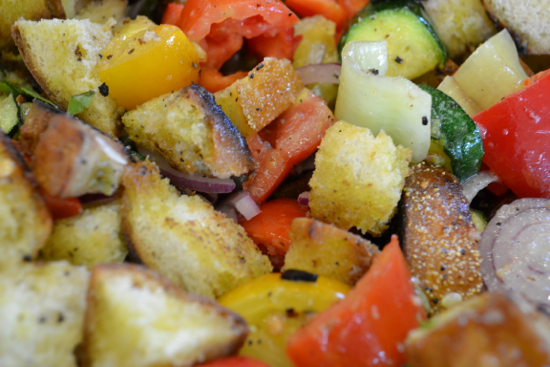 Well, that’s the last of the cooking adventures for this week; unfortunately I will be stuck in chain restaurant-land this weekend working a show, so I don’t expect any real culinary finds while I’m away. Although I might catch up on some older restaurant reviews I keep meaning to find the time to edit and post…