So there’s been a stupid amount of wank over at Shine! by Yahoo over their posting of Marcella Hazan’s “Tomato Sauce with Onion and Butter”. (My main concern in all of the kerfluffling was if the Yahoo! author had Marcella’s permission to copy the recipe word-for-word from “Essentials of Classic Italian Recipe”. But I guess they did?)

Anyway, people who think Italians don’t use butter in their cooking need to go to Northern Italy. ‘Nuff said.

I adore Marcella’s recipes. Her books are how I learned to cook REAL Italian food. “More Classic Italian Cooking” was a staple in my grandmother’s kitchen when she decided to become a “gourmet” chef at home. (My mother now has that coveted volume. I have to make due with the “Essential” compendium.) I am still cooking my way through her books, recipe by recipe, discovering new things. So I new I had to test this stupid controversy out for myself. Can you really make the most amazing tomato sauce with just fresh tomatoes, butter, onion and salt?

The answer is HELL YES. But you may need to adjust the cooking time for your tomatoes. 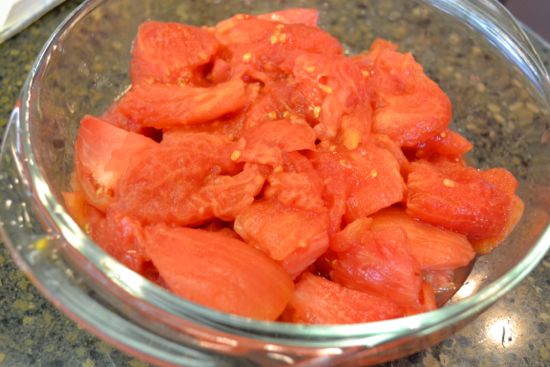 As in, I had about 4 pounds of garden tomatoes (mixed Oxhearts and San Marzanoes) I needed to use up. Like, today. Once I trimmed out some bad bits, it was probably more like 3 pounds. And I did just like Marcella insists, blanched them in boiling water for a minute to peel the skins off. Cut up roughly (removing any hard cores). Threw in a pot with a halved onion (a large one in my case, since I was doing more than her described 2 lbs of tomatoes) and a stick of butter. A little salt. It looks kind of obscene at first, like, is this actually going to turn into something tasty? 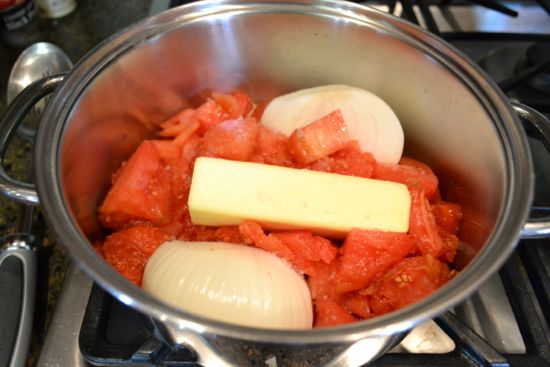 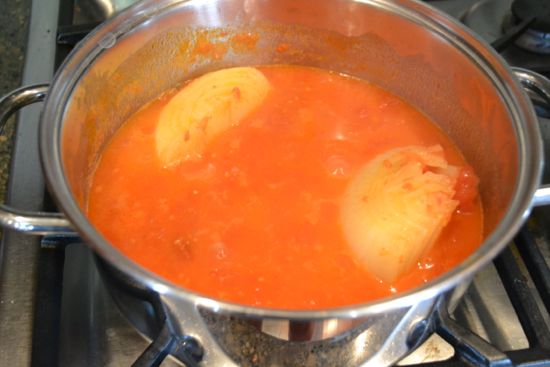 Now, Marcella says cook for 45 minutes “or until the fat floats free from the tomato”. What I had at 45 minutes is what you see above. It was hella tasty, but very watery. I decided to keep cooking. And keep cooking. While taking ample tastes along the way, of course.

After actually about 90 minutes on my stove, I had this. 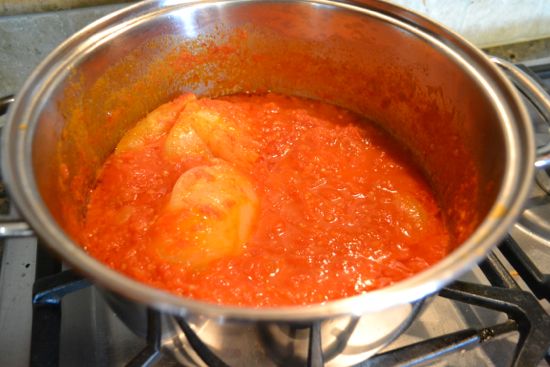 And it was good. Oh, it was good. Sweet, rich, buttery, tomato-y goodness. When Marcella says “I have known people to skip the pasta and eat the sauce directly out of the pot with a spoon”, she is not joking. Because that is exactly what I did for lunch today. While there is some left for pasta, much was indulged with some crusty Italian bread. I even ate the slow-cooked onion that way as it was too good to just toss out as she describes.

So yeah. This recipe is the $h!t. And if you doubt it, you haven’t made it. Just give credit where credit is due, because Marcella is a goddess.