Let’s be clear – I am an unrepentant and unapologetic omnivore. While I don’t hate on vegetarian and vegans like Anthony Bourdain (“Vegetarians, and their Hezbollah-like splinter faction, the vegans … are the enemy of everything good and decent in the human spirit.”), it’s a lifestyle choice I could never make for myself and an idea that actually fills my passionately food-loving heart with dread and horror. Exploring the vast variety of foods available, experiencing various food cultures and traditions around the world…these are sensual pleasures and joys I refuse to impose such severe limitations on in my life. Of course that doesn’t mean I’m not sensitive to the real problems of factory farming and cruelty to animals that pervades the meat industries, and why I support small and ethical animal husbandry as much as possible.

But I’ve also seen how that adorable and cute ‘lil 50-pound piglet can turn into a 400-pound sow that will ram and bite another sow to death in competition for a boar. That’s made it a lot easier for me to enjoy my bacon and pork chops without great angst.

None of this means I do not enjoy strictly vegetarian meals on a regular occasion. I like to embrace the Meatless Monday compaign, as I do think Americans rely too-heavily on a meat-based diet and we don’t eat enough healthy, fresh fruits and vegetables. This is a particular crime in the summer months when so much delicious locally grown produce is available – and if you go to small family-run farm stands and farm markets, it’s often available at crazy low prices. Maugeri Farms is one of my favorite local farmstands, particularly for the wonderful variety of sweet and hot peppers they grow and sell. This weekend I fell in love with these beautiful variegated bell peppers and immediately envisioned stuffing them with something delicious. 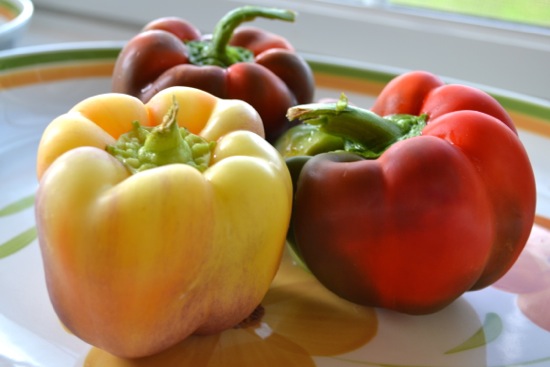 I also picked up an adorable Romanescna eggplant. I just love these eggplant, they’re so much more flavorful and sweet than the typical dark-skinned huge varieties. I’m glad they’re becoming much more common in Jersey’s markets these days as other people are discovering how delightful they are. 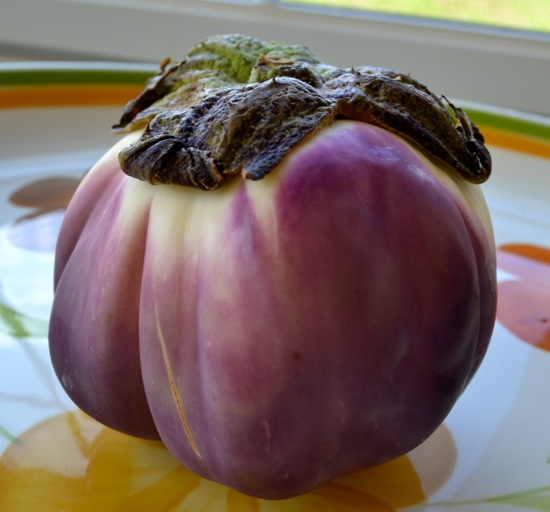 I knew the eggplant should be enjoyed quickly, so the idea of using it as a stuffing for the peppers instead of a ground meat stuffing sounded like a good one. I searched the internet and found a few ideas, but nothing that really inspired me as written. However one recipe suggested using sun-dried tomatoes along with the eggplant as a stuffing. I decided, why not use some fresh oven-roasted tomatoes from my own garden instead? The San Marzano tomatoes I’d roasted the day before came out so delicious, I decided this time to use up the very, very ripe Oxhearts I had to do something with quickly as well. 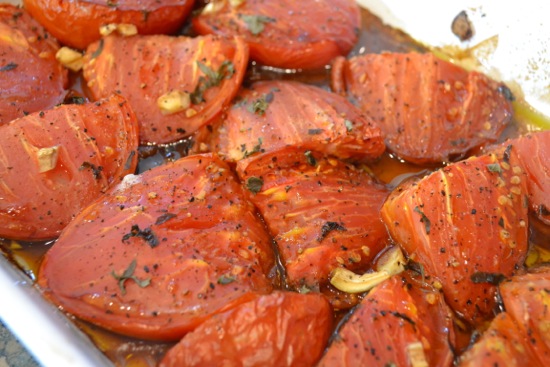 These came out wonderful. In fact I think the oxhearts are perfect for roasting, it really brings out their sweetness and I prefer them this way over raw, where something about the flavor and texture just didn’t appeal to me as much as a traditional beefsteak-style tomato.

In any event, the stuffed peppers came out delicious, particularly served with additional roasted tomatoes and toasted Italian bread on the side: 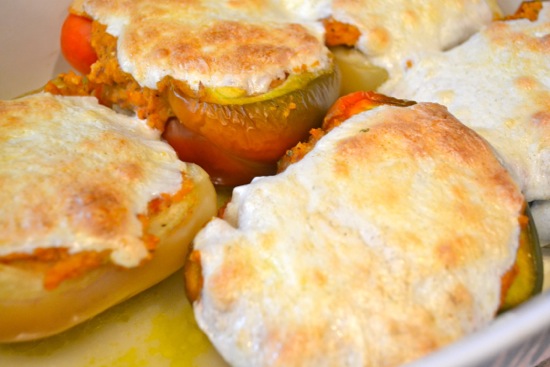 If you’d like the details for my preparation, you can read my final recipe on Squidoo at Stuffed Peppers with Eggplant and Roasted Tomatoes. It was certainly a completely satisfying dinner meal – no meat required.

Just know that tonight it’s likely to be roast chicken on the menu.