It’s long been a sad but true fact – or at least, a statement taken as fact by many of Philadelphia’s top foodies – that the best sushi in all of Philly is actually found in South Jersey. The battle for top sushi destination generally is fought between Matt Ito’s Fuji in Haddonfield and Shigeru Fukuyoshi’s Sagami in Collingswood. I’d yet to get the chance to try either until this past weekend, when I finally went to Sagami to celebrate a friend’s birthday. And I’m so glad that I did! Sagami is every bit as wonderful as I’d been lead to believe it is. So often, heavily hyped-up restaurants end up disappointing me, but there was hardly a single off note in our entire dinner experience.

Sagami doesn’t look like much of anything from the exterior, and it can be easy to miss and difficult to navigate to on this busy stretch of Route 130. I’d made reservations for three at 6pm on a Sunday, knowing that the restaurant was small and seats are at a premium on the weekends. Indeed, upon entry the place was nearly packed, but we were able to secure a nice booth in the small dining room. The ceilings are low and so is the lighting, with much of the decor all dark wood and a tiny sushi bar near the front. Our waitress was quick to bring us an ice bucket for our bottles of sake and white wine – though I did end up using my own cockscrew to open as she made no offer to do so quickly herself.

The menu at Sagami is short and basic. You will not find any fancy, Americanized, sauce-laden, mayonnaise-packed, deep-fried fusion rolls here. So if that’s what you’re looking for, go to another Japanese restaurant. Sagami is all about traditional, classic sushi and cooked offerings. This is a place where you order a “Sushi A” or “Sushi B” plate, sashimi, or chirashi. Pieces of nigiri sushi are available a la carte, as are a short collection of classic, basic maki rolls. For those not fond of raw fish, there are tempura, udon, teriyaki, katsu and sukiyaki offerings as well. Sushi dinners are available either separately in the $20+ range, or with miso soup, salad, cucumber appetizer and dessert in the $30 range. 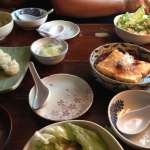 A full table at Sagami

Since this was a celebration we went all out in our ordering. I wanted to sample some of the appetizers so we ordered shrimp shumai, agedashi dofu and a spider roll along with three complete sushi dinners: Sashimi, Chirashi and a Sushi B plate. Our soup, salad and cucumber appetizer came first. The miso soup was warm and soothing, nicely rich with fresh pieces of tofu floating in a velvety miso broth. The green salad was acceptable, served with a decent ginger dressing – perhaps the only thing I didn’t find particularly overwhelming (the limp sprig of parsley on top was totally unnecessary.) The cucumber appetizer was delicious and I’m not a huge cucumber fan. But these slices were perfectly marinated and served with glass noodles in a small bowl…yummy! And delicious on a hot summer night.

Our three appetizers followed and each met or exceeded expectations. The shumai were light little bites of flavor, served with just some wonderful spicy mustard on the side for dipping. The agedashi dofu was perhaps the best I’ve ever had, served in a flavorful broth and topped with tiny mushrooms…I will have to return just to have this dish many more times. It is one of those dishes I judge Japanese restaurants on and now I’ve got a new high bar for every other restaurant to reach. The spider roll was pure simple perfection, as I’ve not seen served in years: just nori, rice, wasabi and fried softshell crab. But when it’s that good, who needs other ingredients? 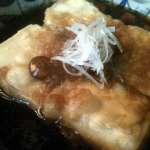 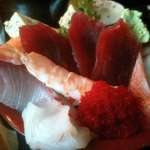 I was already getting pretty full by the time our sushi entrees arrived, but once my chirashi was in front of me there was no chance I was not going to enjoy as much as I could. The solidly packed bowl was topped amply with flying fish roe, and featured beautifully fresh tuna, salmon, octopus, shrimp, and the most amazing tamago I’ve ever tasted in my life. The huge, fluffy omelet was so sweet and airy – nothing at all like the typical dense and chewy tamago of which most of the time I don’t even bother eating more than one or two bites. The seasoned rice was just delicious, even if there I faltered and could only enjoy a little as I wanted to appreciate the fish as much as possible. My companions were equally impressed with their sashimi and sushi plates, which I did not taste because they basically featured most all of the same fish. (OK, I did have to have some of the Ikura – Salmon Roe nigiri – because that is one of my favorites.)

There was not a bite of fish left on any of our plates by the time we were done, and somehow we found a small bit of room for the desserts that came with our meals: fresh pineapple, green tea ice cream, and rum raisin ice cream. For that incredible amount of amazing food, our total for three people was only $128 before tip. I don’t get people saying that Sagami is too expensive because frankly you could easily spend that much for sushi for two people in Philadelphia – and it wouldn’t have been nearly as good.

I give Sagami my absolute best recommendation for anyone who wants to truly experience classic Japanese food and sushi. It’s almost a palate-cleansing exercise, a refreshing reminder of how sometimes simplicity can triumph over complexity; in sushi, less is often more. Of course, next on the agenda will have to be Fuji in Haddonfield if I can make reservations for Omakase some evening. But I just might sneak back for lunch at Sagami in the meantime…

One Response to At Long Last, Sagami